2012’s ‘Flight’ stars Denzel Washington in the role of Whip Whitaker, a troubled pilot who saves a lot of lives by safely crash landing a plane. Loosely inspired by the crash of Alaska Airlines Flight 261, the film focuses on the issue of addiction and the impact it has not only on the life of the addict but also on the people who rely on him to do his job diligently. The sense of morality also emerges as an important theme, as it becomes a central point in deciding the route that the protagonist will take. With so many conflicts at once, the film is riddled with tension. As it draws to a close, we see a change in Whitaker’s character that brings the story to a fitting end. Here we analyze what that means for him. SPOILERS AHEAD

Whip Whitaker is an experienced pilot. He is very good at his job, but personally, he is a mess. He struggles with alcoholism and drug addiction which has completely disrupted his relationship with his ex-wife and his son. Things are so bad that he gets drunk before as well as during flying. He gets away with it due to the negligence on the part of his colleagues who are close to him. However, things get serious when a flight suddenly loses balance and heads straight for a massive crash. Somehow, Whitaker takes control of the situation and saves a lot of lives. Still, six people die, one of which is a flight attendant with whom Whitaker indulged in an affair.

Following this event, Whitaker is hailed by everyone as a savior. However, things get more complicated when an investigation is launched into the crash. This threatens to point the blame toward him, considering that he was heavily intoxicated during the flight. Meanwhile, he meets Nicole, who is struggling with an addiction of her own. They form a close bond, which is also tested when Whitaker becomes desperate to escape the investigation. Even though his lawyer tries to do everything to keep him on the safe side, Whitaker’s separation from alcohol and lies becomes his biggest challenge. 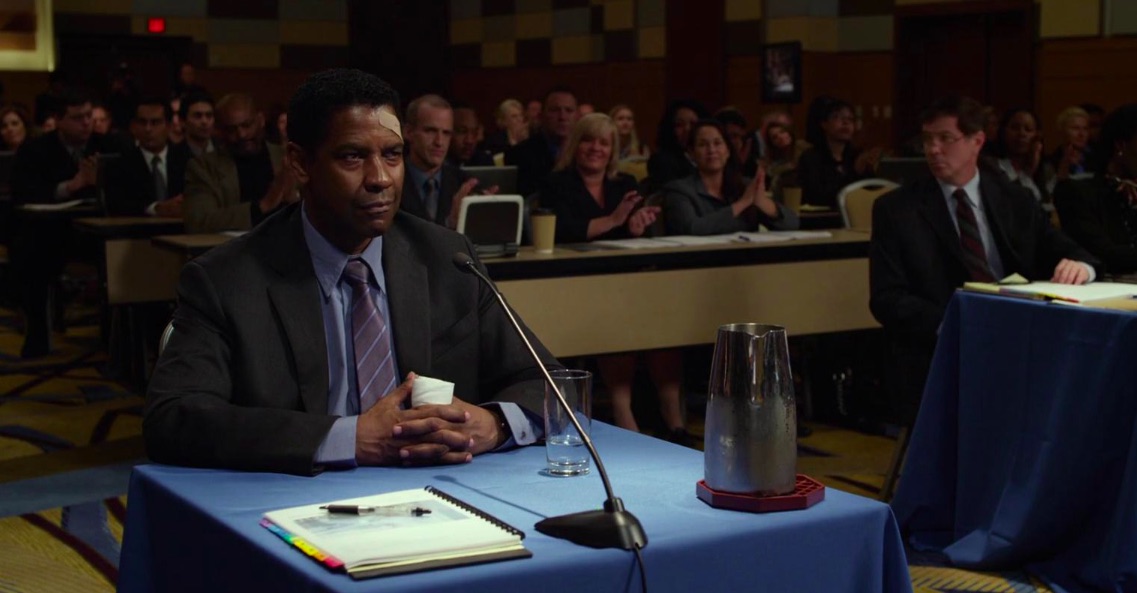 A plane crash is a matter of great concern, and its cause needs to be resolved to prevent it from happening next time. Whip Whitaker knows that the same thing will happen to the plane that crashed under his watch. However, he is not too concerned with the result of that investigation because he knows that it was some malfunction that caused a rather safe flight to plummet. What he doesn’t anticipate is the focus to turn on him and the condition in which he handled the plane.

Despite all his fears, and that of his lawyer, that the fault might fall on him leading him to spend the rest of his life in prison, the investigation reveals what Whitaker knew from the beginning. The crash was caused by a faulty jackscrew that had been suggested for maintenance replacement a year before Whitaker’s flight took off. The replacement never happened and eventually, the jackscrew gave out. This led the plane to nosedive, and it most certainly would have resulted in the death of every passenger and crew member on the plane if Whitaker didn’t take charge and make some risky decisions that cut back the casualties by a huge margin.

This revelation has Whitaker breathing a sigh of relief, but the hearing does not end there. Even though he is applauded for saving the lives of so many people, he is still to be held accountable for his unacceptable work ethic. When asked about his problems with alcohol and whether or not he was drunk on the flight, Whitaker flat out lies. As advised by his lawyer, who’d already succeeded in throwing his toxicology report out of the window, he sticks to the story which cannot be proved otherwise. This still leaves the question of the empty bottles of vodka on the flight.

Due to the initial disturbance in the flight, consumption of alcohol was not allowed. Yet, in the wreckage, the investigators discover the empty vodka bottles, which means that someone from the crew had consumed them. Everyone’s toxicology reports comes out clean, except Whitaker and Trina’s. Because he doesn’t want to take the blame for it, the only other option is for him to place it on Trina. Because she is not there to defend herself, everyone could be easily convinced that it was she who consumed alcohol on the flight.

While lying would save Whitaker, it would undoubtedly tarnish Trina’s reputation. He knows this very well, which is why it becomes difficult for him to stick to the story that would rid him of all blame. He also knows that while he saved a lot of lives on the plane, he wasn’t the only one who helped people. While he was trying to stabilize the plane, Trina was helping the passengers. She helped a boy, which is why she was not in her own seat, strapped to safety. Had she not left her seat, she might have lived.

As much a hero as Whitaker had become for everyone, he knew that tarnishing Trina’s reputation would never bring him peace. Also, this was not some random stranger on whom he was throwing the blame that would end careers. It was a person that he knew well and liked very much. She’d sacrificed her life to save others, and Whitaker was not going to ruin her now. So, he comes clean about everything. He confesses to his addiction and the fact that he’d been drunk on the flight. He also accepts that he’d been drunk for three days straight before he flew the plane. This is where he’s found guilty.

Why Does Whip go to Prison?

Everyone accepts that even in his intoxicated state, Whitaker did something that no other pilot could have done. His lawyer, Hugh Lang, tells him that the airline let several pilots try the same situation on a simulation and none of them succeeded in doing what he did. This leaves no doubt about the fact that people would have died if it wasn’t for Whitaker. Even his co-pilot accepts that. Still, this doesn’t relieve him of the fact that he did something that put the lives of every person on board in danger.

When people board a flight, they trust the pilot do their job diligently. The people as well as the other members of the crew blindly put their trust in the pilot for their safe passage. Knowing how important and risky his job is, Whitaker didn’t refrain from being drunk on the flight. Rather, he had a few more drinks, even when the flight had already experienced some turbulence due to weather. He took his position and his responsibility for granted, and even though he did save lives that day, it was simply because he wasn’t drunk enough to pass out. With this behavior, no one would trust him again, which is why his license is revoked. He is also found guilty of breaking the public trust and is sentenced to 5-6 years in prison.

This does him some good as it breaks his pattern of lying and saving face. He faces the consequences of his actions, something that he’d evaded for so long. Now he’s reached his limit of telling lies and has accepted his punishment. The time in prison also allows him to work on himself. A year later, we see that he has become sober and has also mended his relationships with friends and family. The photos in his prison cell show that he has rekindled his romance with Nicole, and his ex-wife and son have also welcomed him back in their lives, which goes to show just how much damage his addiction had caused.