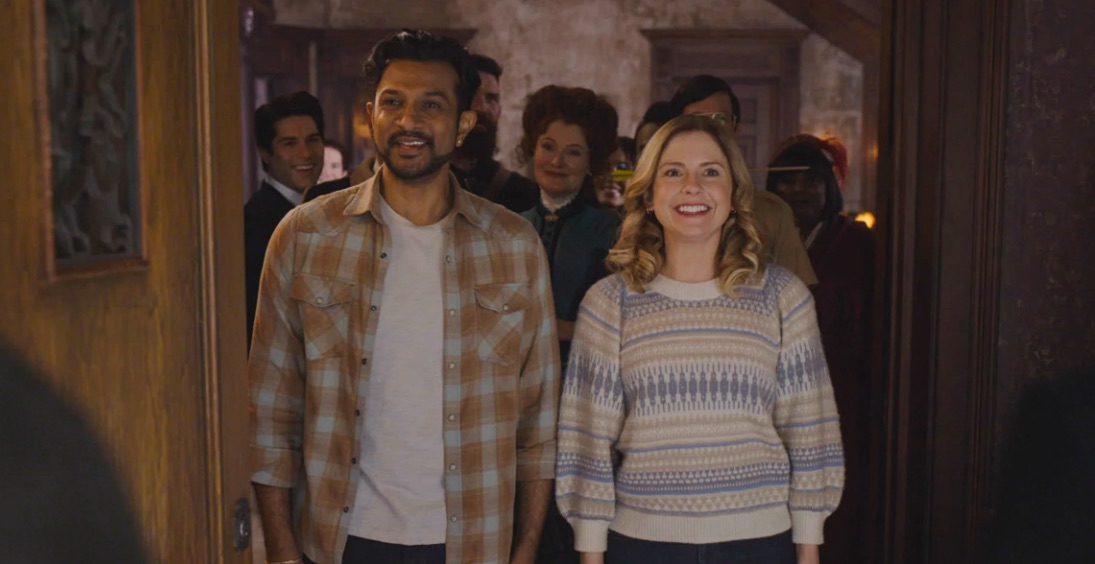 CBS’s ‘Ghosts’ follows the story of a couple, Sam and Jay, who inherits a haunted house. Instead of running away from it, they embrace the residents of their new home and decide to turn it into a business venture. Despite their good intentions, the road is paved with a lot of difficulties for the couple, who discover that along with the perks of living with a bunch of ghosts, they also have to face the challenges that their housemates pose from time to time. The beginning of the second season has Sam and Jay trying to make things work against all odds. Here’s what the events of the first episode mean for them. SPOILERS AHEAD

After a brief hiatus following the events of Season 1, Sam and Jay are ready to open their B&B for business and prepare to welcome their first guests. They ask the ghosts to stay away from the guests, lest their behavior give rise to any complications and risk ruining the reputation of their business. While the ghosts agree not to do their usual spying on the guests, they are forced to change their minds when the guests, Tom and Debbie, actually arrive. Pete notices that while they are all smiles on the surface, Tom and Debbie are the kinds of people who rarely mean what they say, which means that there is no way to know what they actually think about the place and what review they’ll leave.

Meanwhile, Isaac is happy exploring his new relationship with Nigel, but things get complicated when Nigel refuses to meet him at the mansion. It turns out that he doesn’t like Thor’s overenthusiastic nature. As a result, Isaac asks Thor to tone down while Nigel is around, and Thor perceives it as a personal attack. He decides to completely stay away from Isaac and Nigel and hang out with the ghosts downstairs. Eventually, Isaac has to find a way to balance his friendship with Thor as well as his relationship with Nigel.

Ghosts Season 2 Episode 1 Ending: Do Sam and Jay Get a Good Review for Their B&B?

Sam and Jay’s wish to renovate their new home and turn it into a B&B had been cursed from the beginning. They only discover it much later when Thor reveals that he had put a curse on them as soon as they arrived, and it cannot be reversed without risking Sam’s ability to interact with the ghosts. But all of that happened in the first season. Now, Sam and Jay have to face new challenges that are brought by their customers.

While the couple is ready to do whatever it takes to please their guests, Tom and Debbie prove to be quite a challenge. Sam and Jay are driven by the desire not to receive another one-star review, and the old couple seems hellbent on picking out every single flaw in their service, even the ones that aren’t exactly there. Before Sam and Jay can take it personally, they discover that their guests have a reputation for bad-mouthing every establishment they visit. Almost every B&B or restaurant they have been to, including that of their family and friends, has received a degrading review from Tom and Debbie.

Despite Jay’s warning, Sam employs the help of the ghosts to spy on the guests and find out all that they secretly complain about. At first, the complaints seem reasonable, though not something that every other guest would have a problem with. But then, the old couple starts to nitpick everything. From bedsheets and toilet paper to cookies and spoons, they criticize every little thing. Sam tries to take every feedback constructively and even tries to change her behavior accordingly. Jay, on the other hand, refuses to play along.

It’s fine when they criticize the B&B, but when they start making remarks about Sam, he decides to take a stand. He confronts the couple and tells them that he doesn’t care what rating they post on Yelp, but he will not hear any more of their complaints. What he forgets in his rage is that these “complaints” were never supposed to find their way to him and Sam. When asked how they knew about all the things that Tom and Debbie had been saying behind their back, Jay and Sam cover it up by explaining that they eavesdropped on them because they didn’t want to get a bad Yelp review.

Instead of taking offense at the invasion of their privacy, the old couple is more interested in finding out how Sam and Jay knew about their reviews. It turns out that Tom and Debbie believed that their reviews were anonymous. They didn’t realize that they’d been posting all the reviews under their own name, which means that everyone, including their acquaintances, knew that they’d bad-mouthed their business. In order to save face, Tom and Debbie post a review explaining that their account had been hacked, and it was someone else who’d been posting all those bad things about several businesses. To keep Jay and Sam from revealing their secret, they give their B&B a five-star review, which is all that the couple had wanted from their first guests.