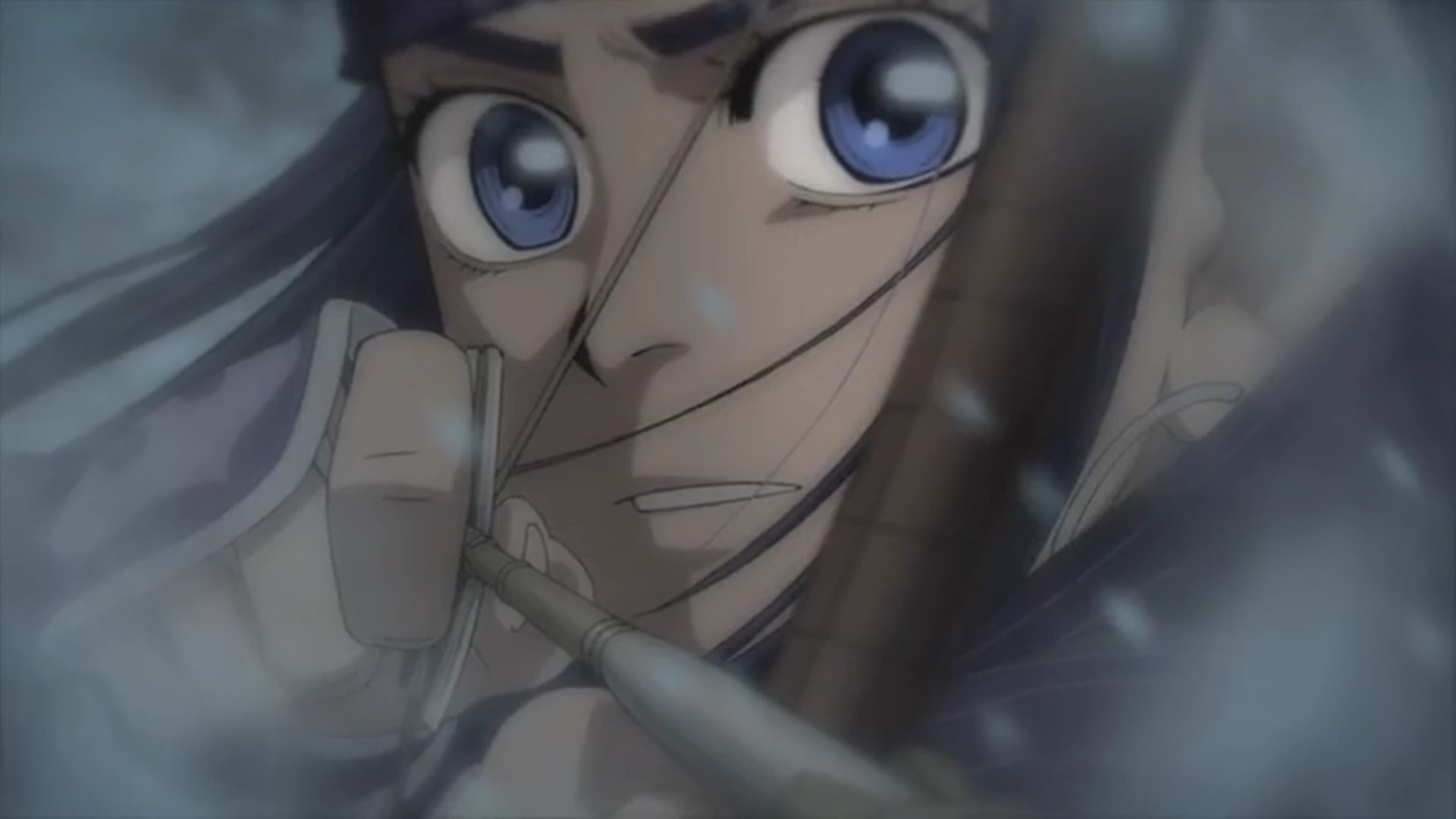 In episode 1 of ‘Golden Kamuy’ season 4 titled ‘Rushin’ Outta Russia,’ Sugimoto’s group is attacked by a mysterious sniper. Meanwhile, in the Lake Akan region, Ushiyama and Hijikata go missing, so Kirawus and Kadokura decide to take it upon themselves to find them. Here’s everything you need to know about the ending of ‘Golden Kamuy’ season 4 episode 1. SPOILERS AHEAD!

After Kiroranke dies and Ogata manages to flee, Sugimoto reestablishes his partnership with Asirpa as they continue their journey of finding the evasive treasure. Sugimoto’s group leaves the Nivkh village and crosses the Russian-Japanese border to reach a village. There they send a telegram to Lt. Tsurumi to inform him about their whereabouts. 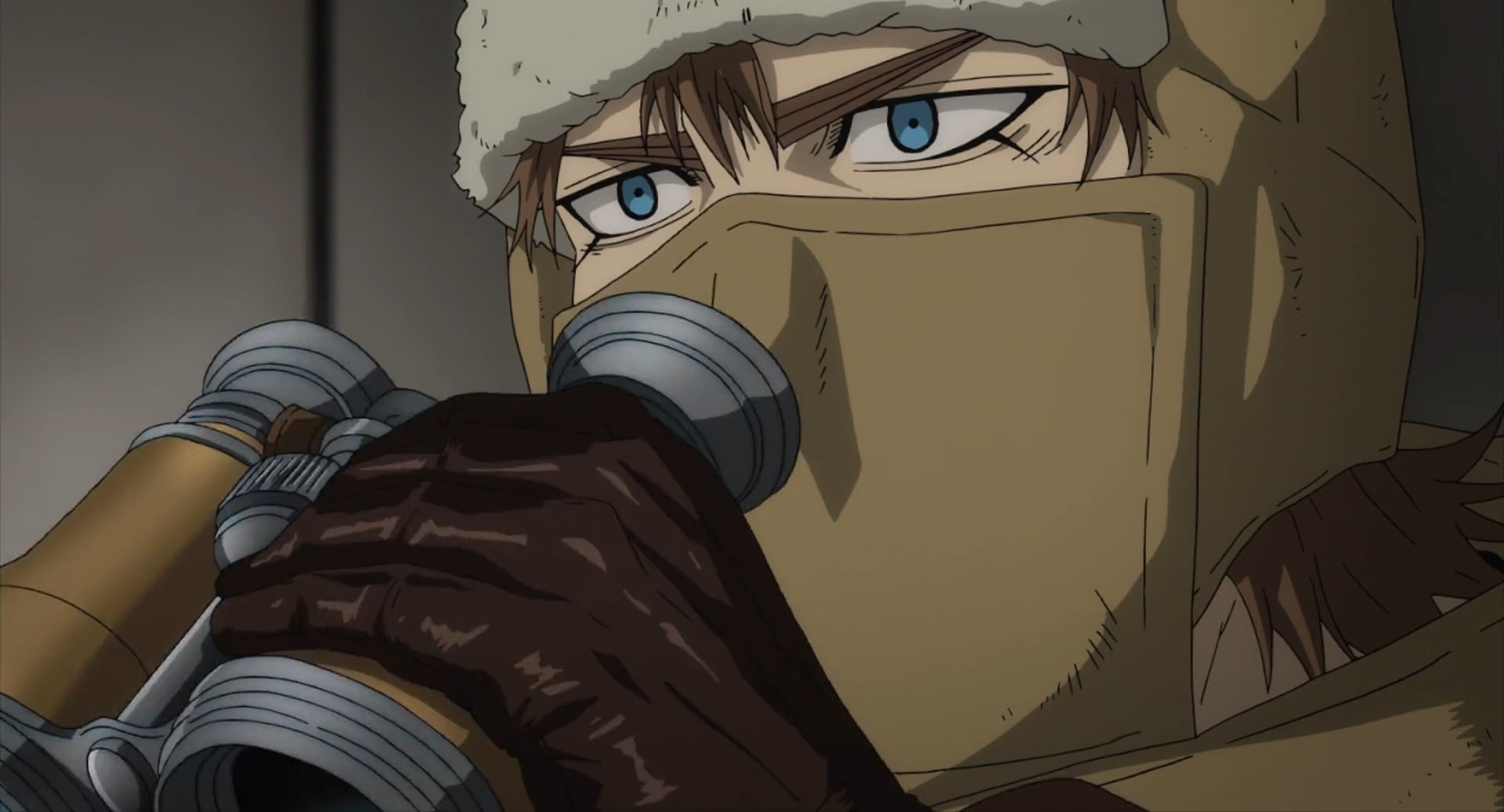 Meanwhile, everyone realizes that Sugimoto is missing for some reason. Unbeknownst to them, he has been buying miso for his comrades. As Shiraishi looks for him, he suddenly gets shot in the leg out of nowhere. His comrades immediately hide as it seems like the work of a sniper, which leads them to speculate that Ogata is already back to take revenge.

Looking at the wide field of view of his shots, the group realizes that the sniper is hiding somewhere far from them. Although Asirpa desperately wants to help her comrade, she has to keep hiding as snipers usually use this psychological warfare to hunt more targets by keeping people alive. While the entire group is clueless about the best course of action, they notice Sugimoto running between the houses far from them.

Golden Kamuy Season 4 Episode 1 Ending: Who is the Mysterious Sniper? Why Does He Follow Sugimoto’s Group?

As the mysterious sniper continues to target his friends, Sugimoto manages to find his hideout and fights him hard. As he is about to stab him, he notices a sketch falling out of his jacket. Furthermore, it is revealed that he is actually not Ogata but a Russian sniper who was looking for people responsible for the emperor’s assassination. By looking at the sketches, Sugimoto realizes that the sniper was actually after Ogata and Kiroranke. Therefore, he explains to the sniper that the latter is already dead, while the former managed to escape. 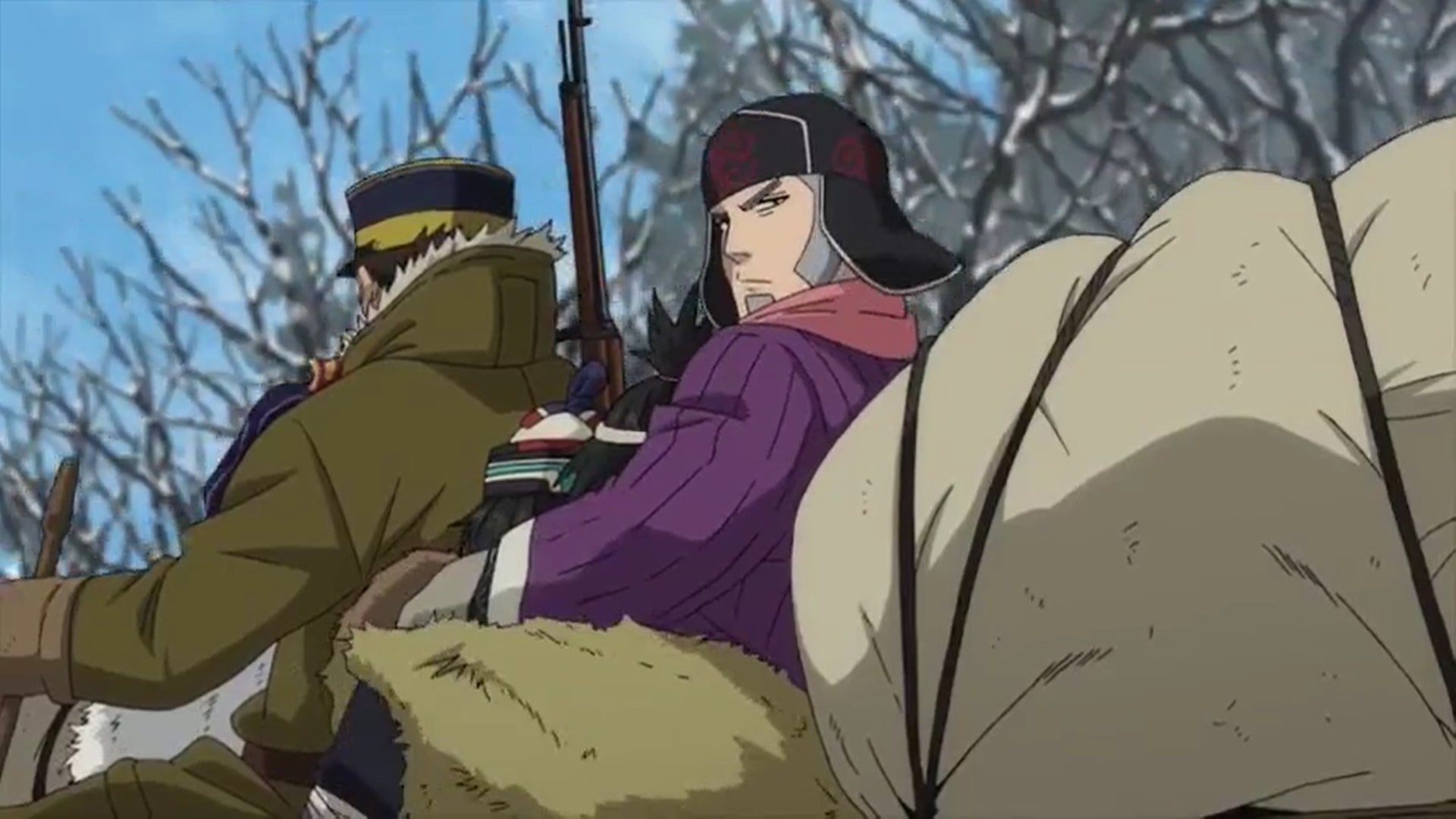 Before they head out, Shiraishi scolds the sniper for making such a terrible judgment error. However, when Sugimoto’s group is going to their next destination, he notices that the sniper is still following the group. He thinks that the sniper is most likely hoping that he will manage to get his hands on Ogata if he stays near them, which seems reasonable considering he has had a history with the group and may plan to take revenge at some point in the future.

Who is Waichirou Sekiya? Did He Have a Role to Play in Ushiyama and Hijikata’s Disappearance?

Near the Lake Akan region, Kirawus and Kadokura learn from Nagakura about the mysterious disappearance of Ushiyama and Hijikata. While Kadokura argues that they are unbeatable and have just most likely found some girls to hang out with, Nagakura still appears very concerned as they have not shown up for two days. As they head outside, Kirawsus argues that the two of them could have been killed by the prisoner suspected to be hiding near Lake Akan. To his surprise, Kirawus learns that Kadokura used to be a jailer and actually knew him well. 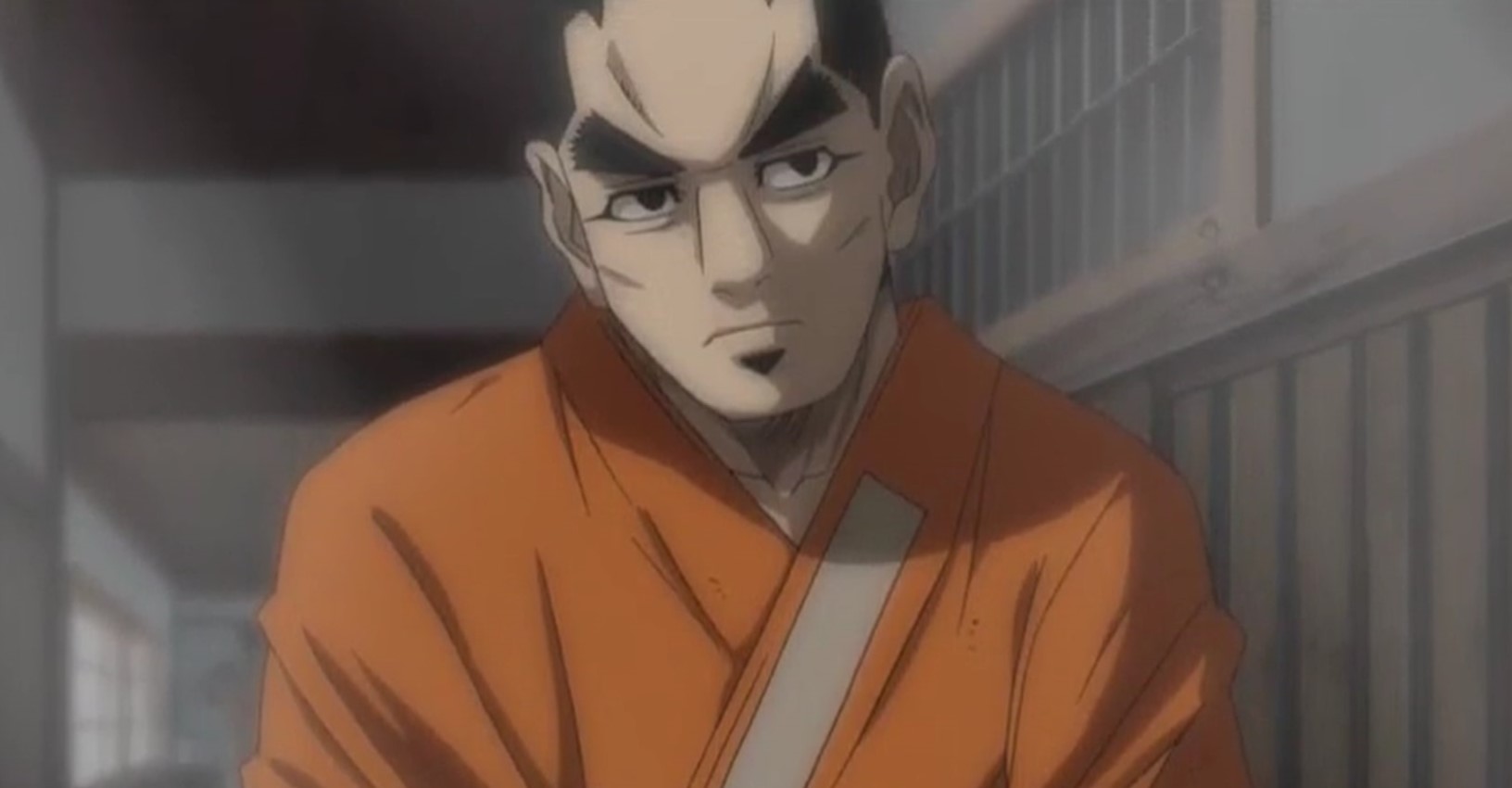 Kadokura recalls that his name was Waichirou Sekiya and although he was useless in a fight, the man was very clever. The prisoner used to be a vet at one point in his life but killed 30 men using potassium cyanide, arsenic, and strychnine (used to exterminate Ezo wolves). He used to enjoy testing people’s luck by trying to poison them and seeing who was fortunate enough to evade their death. After an incident in which he poisoned his cellmates’ food, killing him in the process, Kadokura was entrusted with the responsibility to keep an eye on the dangerous prisoner.

As they continue searching for Ushiyama and Hijikata, Kadokura is told by a boy playing on the ice-covered lake that he did saw the latter standing right in that area. As he contemplates different possibilities, Kadokura finds a silkworm cocoon at his feet. It turns out that sometime earlier, Hijikata was forced by Sekiya to a dangerous game to save Ushiyama who he had already paralyzed using fugu poison and kept in a coffin where there was only space to breathe. 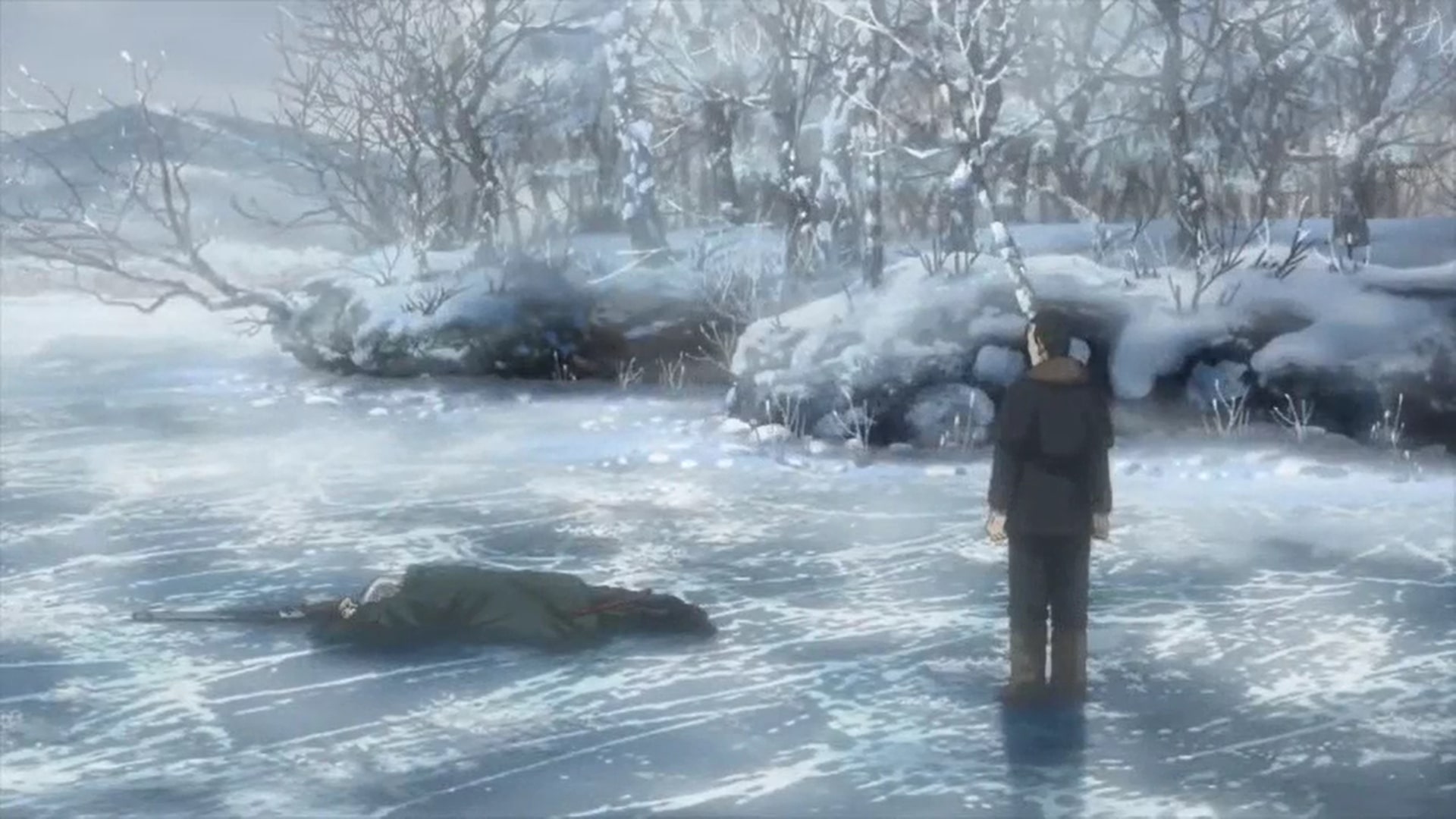 Sekiya forced Hijikta to choose and ingest one out of a handful of silkworm cacoons, half of which were poisoned, while the other half was unadulterated. Unfortunately, the one that Hijikata picked ended up incapacitating him too, but to Sekiya’s surprise, he still was alive after eating the poison. In the present time, clueless Kirwaus is approached by Sekiya, who offers him some poisoned fish to test his luck as well. Fortunately, Kadokura ends up dropping those fishes later and they somehow manage to swim back into the lake- which unbeknownst to the duo, saves their lives.