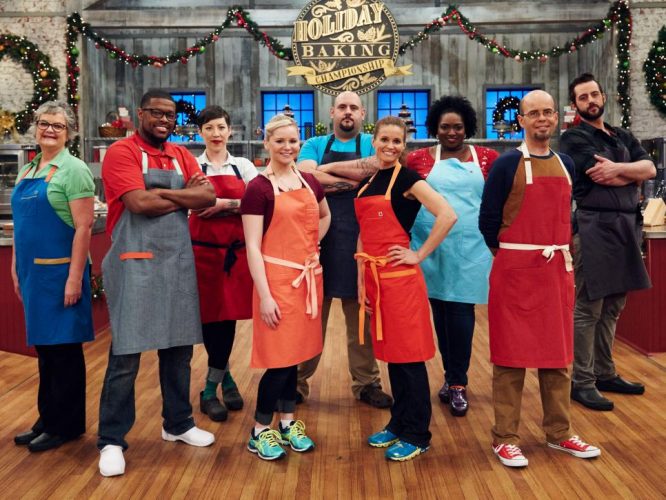 The concept of reality television series, a genre that has unscripted programs and includes people who are not professional actors exploded between the late 1990s and early 2000s after a couple of very popular series such Survivor, Idols and Big Brother. As time went by, reality television started showcasing other talents as well, and soon we saw various reality competitions for singers, dancers and chefs were not far behind. These reality television competitions gave the common man a shortcut to their dream of becoming famous and being appreciated for something that they are good at. I Love to Eat was one of the first live television series hosted by James Beard that aired on NBC in 1946-47. Food Network’s one of the first cooking competitions was the Iron Chef America and The Next Food Network Star in 2005.

Halloween Baking Championship is one such American cooking competition that belongs to the genre of food reality television. It premiered on the Food Network in 2005 and is similar to the Holiday Baking Championship. As the central theme of the competition is Halloween, it is obvious that it is a seasonal show and runs for a couple of weeks in the month of October. The aim of the competition is to find out the best baker of eerie and mysterious desserts.

Halloween Baking Championship Cast: Who is in it?

This show has a panel of judges which keeps changing for every season (except Carla Hall who has been present throughout), unlike the Holiday Baking Championship. Richard Blais hosted the first season of this show with chefs Carla Hall, Ron Ben-Israel and Sherry Yard as judges. In the second season, we saw Carla Hall (as the returning judge) with Sandra Lee and Damiano Carrara. The comedian Jeff Dunham hosted season 2. The third and the fourth season were hosted by John Jenson who is an actor, writer, host, and producer. He began his career as a comedian and then joined the series Talk Soup that went on to win the Emmy awards. He has worked both in front and behind the camera. The judges who joined him are Carla Hall, Lorraine Pascale, and Zac Young.

John Jenson is expected to return as the host for season 5.

Halloween Baking Championship Plot: What is it about?

In every season the host and the judges welcome eight talented and scarily skilful master bakers into the Halloween baking Kitchen to battle it out in bone-chilling challenges while the flamboyantly costumed judges critique them. Only one among the eight will be the reigning champion and win a prize of $25,000. Every episode is divided into two rounds, one being the “Preliminary Heat” and the other being the “Main Heat”. In the first round, the bakers are informed of the theme and the varying cook times that they will have to adhere to( it could range anywhere from 30 minutes to two hours long). They are asked to create a small pastry, cookies or small to medium sized cakes. The winner of this round gets an advantage when they move forward to the next round. The advantage may change every episode. It could be exclusive use of a specific ingredient or a mould or even a choice of a specific theme that they would like to go with. The second round is given more time than the first as the contestants need to bake large confections.

In the finale, the contestants are given time to finish their detailing perfectly. The dessert needs to match the theme that was given which is usually related to the theme in the first round. This show also follows the concept of progressive elimination with one contestant getting eliminated every episode. The final episode has top three or four contestants competing to be the winner to takes it all. Doobie pastry chef who starred on the show shared his experience in an interview saying, ”It was one of the most difficult things of my life. Seeing it on TV and then being there in person doing it are two different things. It’s very stressful. You barely have time to think. You’ve got to come up with what you’re going to do right then, and you have to know what you’re going to make. You have a matter of minutes to get started in your head.”

Hisley, another certified pastry chef and a former contestant on the show spoke about how the show has impacted a lot of inspiring pastry chefs, ”A lot of students come to our school based on watching the Food Network. It’s a different perspective, different skill sets. The restaurant chef works long hours back in a kitchen. There’s not a lot of glitz and glamour”, he explains. “Baking is early morning and high volume. It is a creative effort that lets you work with your hands,” he said. “I love baking.”

Halloween Baking Championship Season 5 Release Date: When will it premiere?

Halloween Baking Championship season 5 is all set to release on September 23, 2019 and will continue till the end of October. Don’t forget to mark your calendars.

There is no trailer available but you can head over to the official site of the show if you wish to check out clips from past episodes.