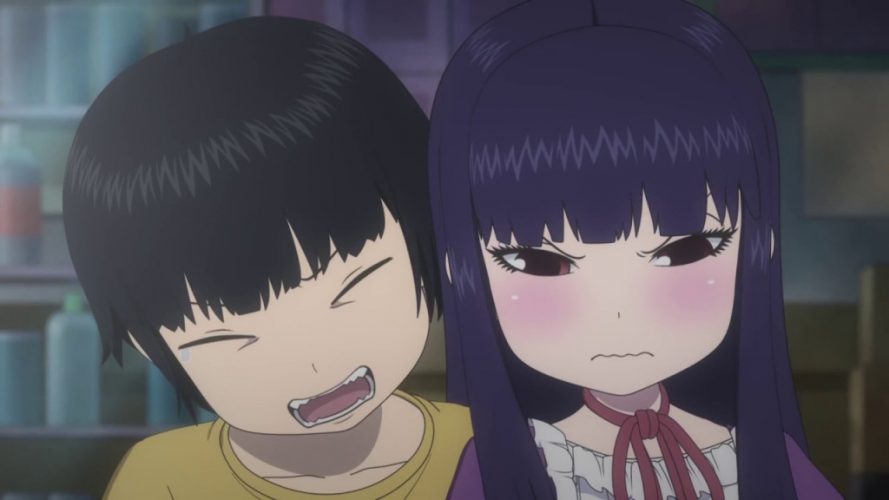 High Score Girl (also known as Hai Sukoa Gāru in Japanese) is a romantic comedy anime television series which is based on a manga series of the same name. Written and illustrated by Rensuke Oshikiri, the manga series was first published on the Monthly Big Gangan magazine on October 29, 2010, and it ran for almost a decade, coming to an end on September 28, 2018.

Months before the manga series came to an end, famed Japanese animation studio J.C.Staff announced plans to adapt it into an anime television series, and Season 1 of Hi Score Girl premiered on July 14, 2018. It was an immediate hit among fans of the source material and new viewers alike, and this prompted J.C.Staff to renew the show. Subsequently, an original video animation (OVA) episode was released. A second season was quickly commissioned as well.

High Score Girl season 1, consisting of 12 episodes, premiered on July 14, 2018 and it ran till September 28 of the same year. Months later, on March 20, 2019, three OVA special episodes were released under the title High Score Girl: Extra Stage, leaving fans delighted. Further, during the screening event of the OVA episodes, J.C.Staff announced that a second season had been confirmed.

High Score Girl enjoys a pretty large following in the West and hence, it came as a surprise when an English dub was not released. However, a few months after the release of Season 1, an English dub of the show was finally licensed. If you want to watch the show in English, you can find dubbed episodes of season 1 on Netflix.

Hi Score Girl is a romantic comedy set in 1991 which follows the evolving relationship between two sixth graders.

On one hand, there’s Haruo Yaguchi. Also known as “Beastly Fingers”, Haruo is a frequent visitor to the nearby gaming arcade, where he reigns supreme. Beneath his persona of a professional gamer, however, Haruo is a plain sixth grader living an uneventful life. Being neither smart, nor athletic, nor popular, Haruo would rather spend most of his free time playing video games at the arcade than going out into the real world.

On the other hand, there’s Akira Oono. Born to a wealthy family, Akira is attractive, popular in school, and boasts perfect grades, and is as close to a perfect girl as anyone can be. Understandably, Akira does not frequent the arcade as much as Haruo does, and in her absence, Haruo lives under the illusion that he is the king of the arcade.

However, this all changes when one day Akira visits the arcade and scores a 29-game win streak. On seeing Akira’s prowess at video games, Haruo steps in to try and assert his dominance, but loses to her seven times in a row. With the illusion of his supremacy shattered, Haruo challenges Akira to Street Fighter 2, and finally manages to beat her, albeit using underhand tactics. In the aftermath of the match, he receives a tight slap from Akira, and this marks the beginning of a rocky and strange relationship between the two gamers. On one hand, Haruo loathes Akira, but on the other hand, he wishes to have a competitor who is an equal, and Akira is more than up to the challenge.

While High Score Girl has several characters, only a handful of characters are central to the plot of the show. Below, we’ve provided you with brief backgrounds on the important characters in the show.

Haruo Yaguchi: One of the three main characters in the show, Haruo is just an average sixth grader. Haruo is an average student in his class, and is neither athletic, nor popular. However, one thing he excels at is playing video games. Known as “Beastly Fingers” Haruo, the sixth grader has a nearly untouchable record at the local arcade, and he particularly excels at playing Street Fighter II. However, after a fateful encounter with Akira at the gaming arcade, Haruo’s illusions about his supremacy in gaming are shattered. Following his defeat at the hands of Akira, Haruo starts to dislike her, and even considers her to be his rival in gaming. As far as Haruo’s personality is concerned, he is shown to have a massive ego. That being said, as the show progresses, Haruo grows as a person and stops being snarky all the time.

Akira Oono: The daughter of a rich industrialist, Akira is Haruo’s classmate and one of the most popular girls in the class. Akira is attractive and smart and boasts an impeccable academic record, making the “perfect girl” of the class. In this sense, she is the polar opposite of Haruo. However, she has another side to herself. In order to escape the strict academic and disciplinary regimen at home, Akira sometimes sneaks off to the gaming arcade, and it is during one of these sessions that she encounters Haruo. Like Haruo, Akira is shown to be exceptional at playing video games, and she also excels at Street Fighter II. As far as Akira’s personality is concerned, she is shown to be a rather reserved person. She never talks and her most commonly used methods of communication include gestures and facial expressions.

Koharu Hidaka: The third main character in the show, Koharu is Haruo’s classmate in junior high school. Although Koharu starts off as an introverted person who rarely talks and studies alone, she develops into a more sociable and likable person over the course of the show. After spending some time with Haruo, Koharu also takes an active interest in video games. Despite being new to gaming, she is shown to have a knack for playing games, especially fighting games. Over the course of the show, Koharu becomes a gamer to be reckoned with and starts vying for Haruo’s attention. As far as Koharu’s personality is concerned, she is mostly introverted but displays a sadistic side at the gaming arcade whenever Haruo is around.