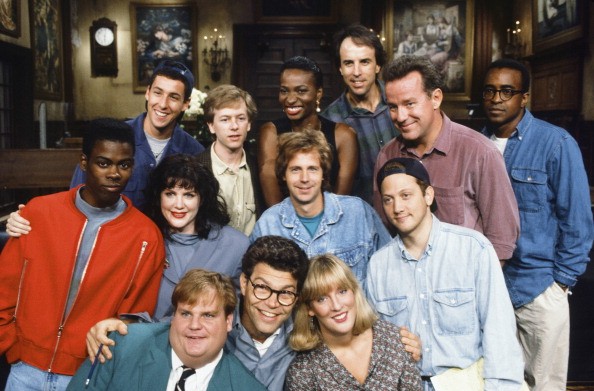 Adam Sandler is all set to host ‘Saturday Night Live‘ for the first time in his career. It was the SNL characters catapulted the actor into a household name in the mid-’90s. Sandler will appear as the host on the May 4th episode of SNL alongside Shawn Mendes, who will come as a musical guest.

Sandler has a long list of popular characters he had played for ‘Saturday Night Live.’ It’s not hyperbolic to say that the Studio 8H’s sketch comedy launched Sandler’s career. ‘We are happy to welcome Adam back to SNL in what is sure to be a special night,’ said executive producer of the show, Lorne Michaels.

Sandler, who joined the show in 1990 as a writer, promoted as a performer in 1991. For a while, he shouldered the double responsibility of writer and performer. His iconic characters include Opera Man, an obsessional newspaper reader and Hank Gelfand, the desperate house husband of Beverley. Sandlers characters were known to break during the episode.

He was also famous for staging some of the show’s remarkable musical pieces of the early 90s, which include, ‘The Thanksgiving Song’ and ‘The Chanukah Song.’ His exit from the show sparked controversy when Sandler revealed that he fellow cast member Chris Farley was fired from the show in 1995.

Sandler has a prolific film career after that incident, who climbed up the Hollywood ladder with the help of the SNL momentum. He scored in the box office registers with hits like ‘Happy Gilmore,’ ‘The Longest Yard’ and ‘Click.’ The void he left behind in the SNL roster is still there. Sandler’s latest comedy, ‘100% Fresh,’ is streaming on Netflix right now.

The actor also has the movie, ‘Murder Mystery,’ lined up for premier on the streaming platform somewhere next year. Sandler plays the lead alongside Jennifer Aniston and Gemma Arterton in the movie, in which he plays washed-out Now York cop. ‘Murder Mystery’ is the second collaboration of Sandler and Aniston. Their first outing together was the 2011 rom-com, ‘Just Go With It’ in 2011. The movie was a huge hit of the year, with a clean sweep of $215 million globally.

A24’s crime-dramedy ‘Uncut Gems’ is the second Sandler movie which is in the post-production stage. Set in the Diamond District of New York, Sandler plays the role of a jeweler and gambling addict. Lakeith Stanfield, who is known for ‘Sorry To Bother You’ and ‘Atlanta Star’ also joins the cast. He plays as the close ally to a famous client of Sandler’s jeweler. Eric Bogosian and Judd Hirsch play the other two important roles in the movie.

The May 4th episode is also a second turn for the guest. Shawn Mendes. He had appeared in the sketch as a musical guest in SNL and per performed his hit number ‘Mercy’ in December 2016, during those episodes hosted by Emma Stone. in The Grammy Award-nominated singer, will join the SNL crew once he has done with a worldwide arena tour. Show creator Lorne Michael is really excited about the return of his Opera Man. ‘Saturday Night Live’ is produced in association with Broadway Video.