How Did Jason Ellis Die? Who Killed Him? 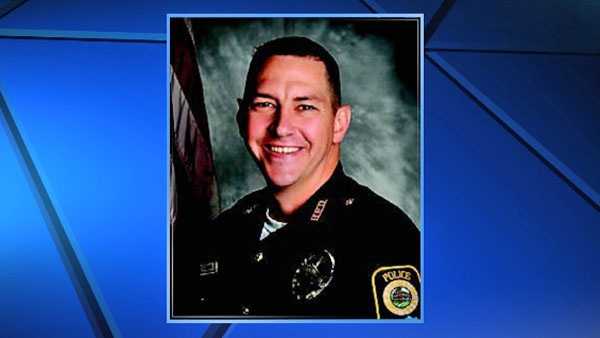 A seven-year veteran of the Bardstown police department and a member of the K-9 unit, Jason Ellis was ambushed and brutally gunned down at around 2-3 a.m. on May 25, 2013. Mystery shrouds the shocking death of this much-loved police officer. Investigation Discovery’s ‘Still a Mystery: Killer Among Us?’ delves into this mysterious killing and the ensuing investigation that has left police baffled. If you are intrigued to know more about this peculiar case and whether the police found out who killed Jason Ellis, we have got you covered.

How Did Jason Ellis Die?

Growing up, Jason was a promising baseball player. He was known to have played in his high school’s and college’s baseball teams and was eventually signed by the Cincinnati Reds, where he played in the minor league system between 2002 and 2004. At the time of his murder, Jason was married to his wife of 9 years and lived in Bardstown, Kentucky. The couple had two children, Hunter and Parker. After leaving baseball, Jason fulfilled his childhood dream of becoming a police officer. In 2006, he joined the Bardstown police force and served there till his death. Jason was a K-9 officer and the only one in Bardstown. He was also involved in coaching youth baseball.

On May 25, 2013, after a late arrest and having put a prisoner in the Bardstown jail, Ellis called off his shift and headed home. At that time, he did not have his canine partner with him. He was also operating a pool car, which did not have a dash camera to record the incident. At about 2:30 am, he left the Bluegrass Highway on Exit 34 and found the ramp blocked with tree limbs. He got down to investigate and started clearing the limbs manually when he was ambushed. He was shot at with a shotgun, and he fell among the tree limbs on the ramp. Ellis evidently never had a chance to fight back as he was found with his service weapon still in its holster.

Soon afterward, a woman and a distillery worker saw the patrol car and went to help the cop clear the branches. They found Ellis on the ground in a pool of blood and immediately dialed 911. One of Ellis’ closest friends, Sgt. Michael Medley was among the first to hear the distress call on his radio. He thought that the radio had picked up a signal from a neighboring town but then realized that the location was nearby. He drove to the ramp and was one of the first responding officers to find Ellis’ dead body. The autopsy revealed that Ellis was shot multiple times in his arm, side, neck, head, and other areas not protected by his ballistic vest. The weapon used in the slaying was a 12-gauge shotgun.

Mystery surrounds the death of Jason Ellis as cops haven’t been able to conclude the case. From the time of the murder, the police have interviewed numerous people of interest involved in the case, but none of the leads has ever resulted in an arrest. Investigators also initially received dozens of tips and interviewed people that Ellis had arrested but were unable to generate any leads. As there was no dashcam footage and no witnesses, police didn’t have a lot of clues to start their investigation with. Initially, the police believed that Ellis was murdered when he stopped to assist a motorist on his way home. 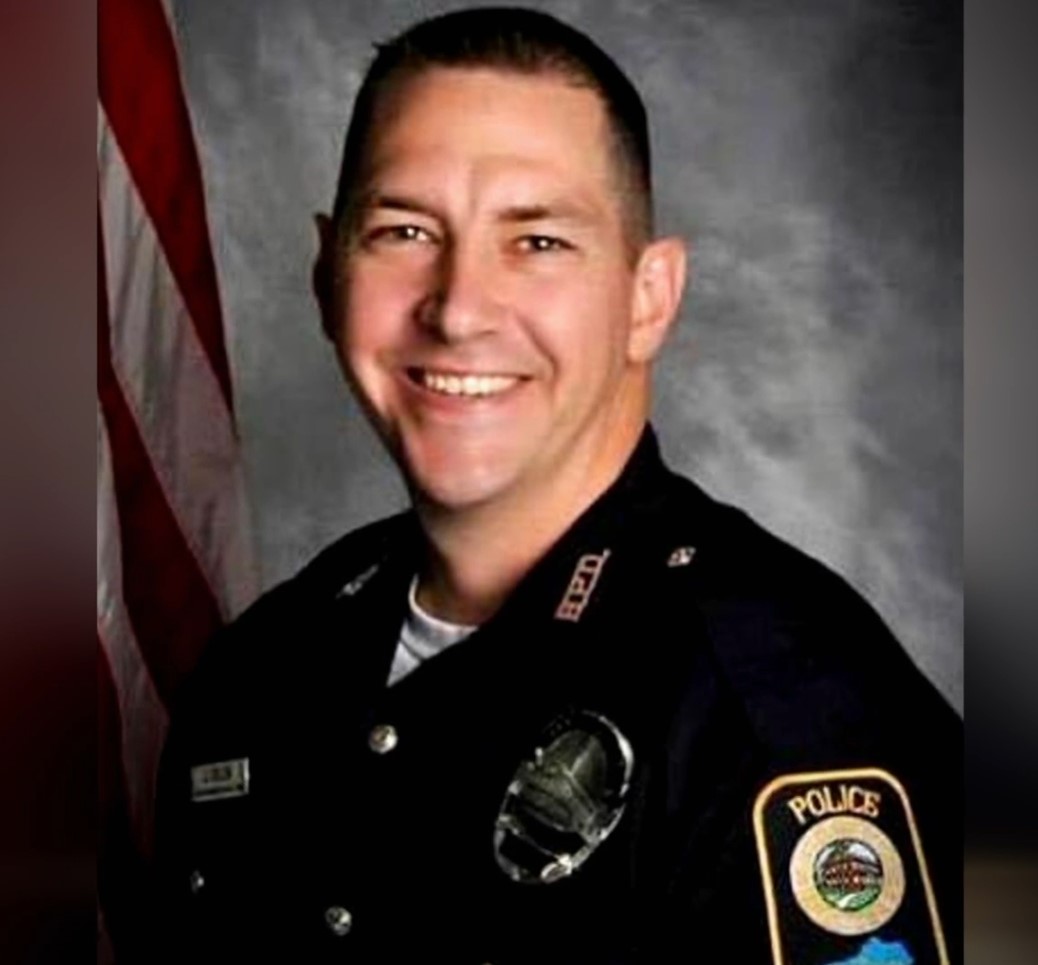 Later, the police ascertained that the trajectory of the bullets placed the shooter on a hill above the exit. That was when the police started believing that Ellis stopped to move debris from the roadway and was ambushed. On May 29, 2013, Bardstown Police Chief Rick McCubbin put out a public statement saying, “We believe that he was the target, this was methodical, precise, planned and executed in a perfect fashion, unfortunately.” The police also found that the debris Ellis removed consisted of tree limbs from a tree not indigenous to the area, which indicated that the debris was deliberately placed there.

Six months after the killing, the state police, desperate to find the killer, made a video asking the public to help them identify the perpetrators. Two years after the murder, the state police released yet another video, this time with a direct plea from Ellis’ wife, Amy. In the video, she said, “His family, our two sons, his wonderful friends and I cannot heal without knowing who and why he was taken from us by this senseless murder.”

There were multiple monetary rewards as well for any information related to the killings. Jeff Ruby, the owner of multiple high-end restaurants, reportedly posted a $33,000 reward for information that would lead to the arrest and conviction of Officer Ellis’ murderer. The FBI also offered a reward of $50,000 for the same information. Investigators received numerous tips after the monetary rewards were announced, but unfortunately, none of them led to a break in the case. 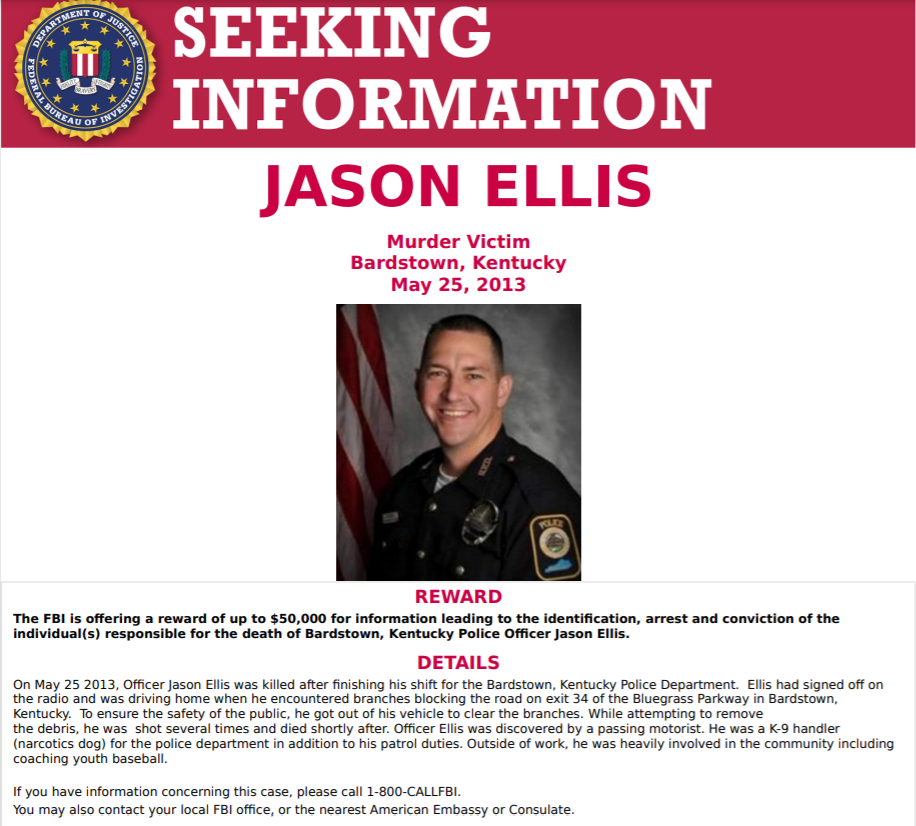 Near the 4th anniversary of Ellis’ death, Kentucky State Police announced that two retired troopers had been hired back to focus full time on Ellis’ death and a few other unsolved cases in Nelson County. An anonymous prison inmate also spoke with reporter Stephanie Bauer and retired homicide detective Dwayne Stanton. There, the inmate claimed that Ellis was shot because he was closing in on an investigation of a ring of storage sheds and business burglaries. The inmate said that the burglarized storage units contained high-end antiques and drugs. The inmate further claimed that at least 4 men were hired by an unidentified person to carry out Ellis’ murder, and those people were later eliminated to tie up loose ends. These claims were never confirmed or substantiated.

Even though the details surrounding the brutal slaying of Officer Ellis remain a mystery to this date, he lives on in the memories of his family and co-workers. While the crime has been a tough one to cope with for those who knew and loved him, many still hope for answers someday. Until then, they choose to honor Officer Ellis’ life and legacy.