How Did Miles Dabord Die? 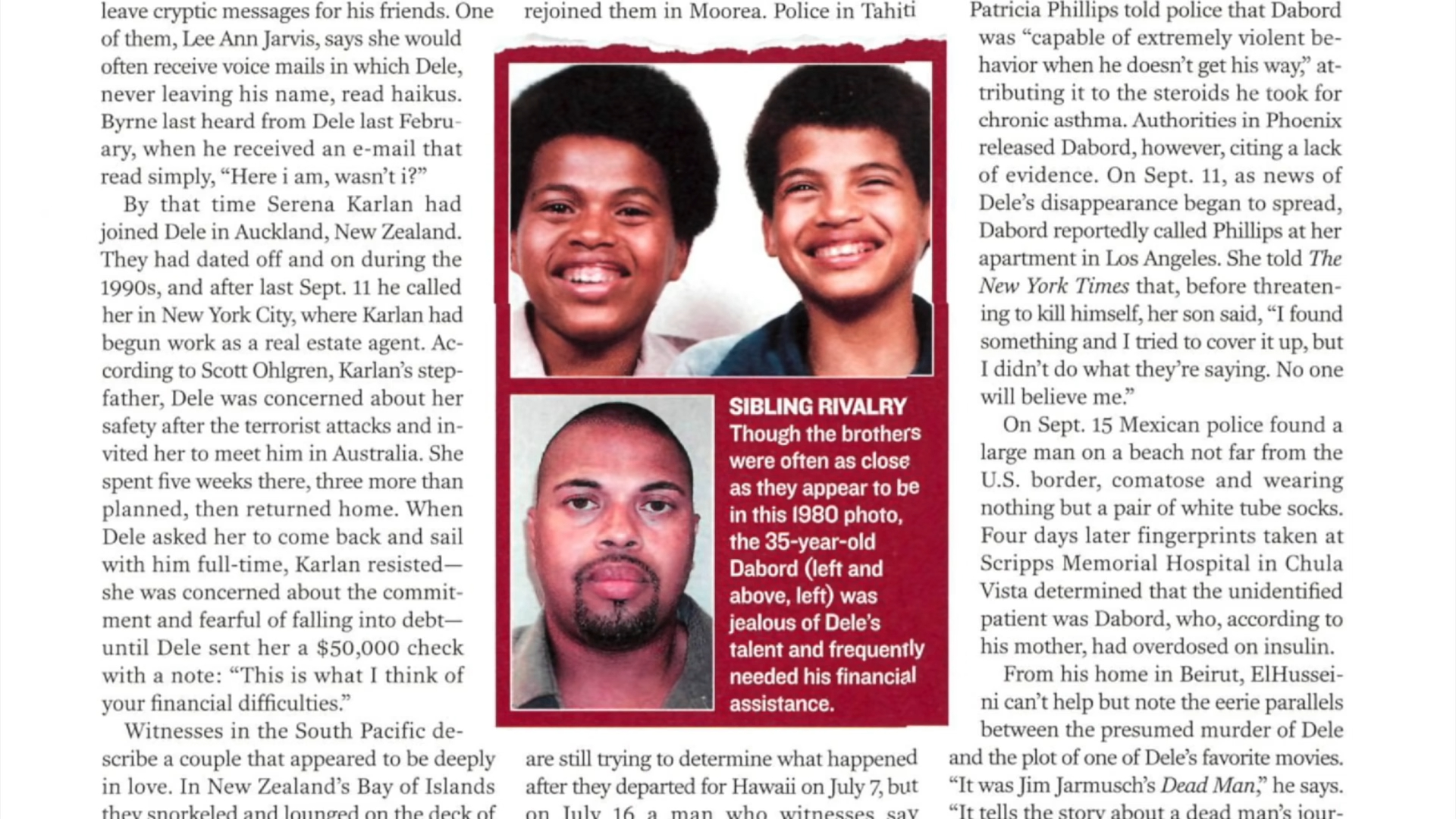 Investigation Discovery’s ‘Dark Waters: Murder In The Deep: Screams of the South Pacific’ chronicles the mysterious disappearance of NBA champion Bison Dele, his girlfriend Serena Karlan, and the captain of his boat, Bertrand Saldo, from the middle of the South-Pacific ocean in 2002. Miles Dabord, Dele’s estranged brother, was the biggest suspect in the disappearance case. The police believe Dabord killed Dele and his girlfriend during an altercation on the boat. So now, if you are curious to know all about how Miles Dabord died, we have got you covered.

Miles Dabord, also known as Kevin Williams, was the estranged brother of Bison Dele. Born to Eugene Williams and Patricia Phillips, Miles started out as a promising basketball player, but an early diagnosis of asthma did not let him progress further. It would appear as though he then spent his entire life in the shadow of his celebrity brother. In early January 2002, when Dele and Karlan were in Auckland, New Zealand, Dabord arrived to meet them unexpectedly.

Reportedly, the two brothers never saw eye to eye and argued frequently until Dabord left. He came back in May and sailed the yacht to Tahiti along with Saldo and a crewmember, Mark Benson. In Tahiti, the three were joined by Dele and Karlan. The group then decided to sail out into the South Pacific but the brothers’ fighting seemingly became so unbearable that Benson left during an island stopover.

On July 8, 2002, after setting sail to the South Pacific, Karlan called Porter from the yacht and told him everyone was happy and having a good time. That was the last time anyone ever heard from Karlan or Dele. Miles Dabord then went off the radar until September 2002, when he was caught in Phoenix, forging Dele’s signature to buy US$152,000 worth of gold in his brother’s name. The bank immediately informed Porter, who, in turn, informed the Phoenix police, who apprehended Dabord.

Upon his arrest, Dele’s passport and checkbook were found on him. During interrogation, Dabord claimed he was buying the gold on behalf of his brother. Since Dele was “not available” to substantiate this claim, the Phoenix police let Dabord go. Upon investigating, the police found that a man matching the description of Miles Dabord was spotted on July 8 at the Pearl Resort, on Moorea, where he stayed with his girlfriend.

The police also found witnesses who said that on July 16, a slightly damaged yacht registered as the Aria Bella was piloted into Phaeton Bay on Tahiti’s Southeastern shore by a man fitting Miles Dabord’s description. The letters spelling Hakuna Matata were found to have been removed from the stern. It was then that they started searching for Dabord on charges of forgery and identity theft.

How Did Miles Dabord Die?

After being held overnight at Phoenix, Dabord first went to his girlfriend’s place in Palo Alto and then crossed the border into Mexico. On September 15, 2002, Dabord, who was found comatose on a beach, was delivered to Scripps Memorial Hospital in Chula Vista, California. He was believed to have intentionally overdosed on insulin, due to which he slipped into a coma.

Doctors at the Californian hospital informed Dabord’s mother that there was little hope for his survival. On September 27, 2002, she asked for the life-support systems keeping him alive to be disconnected. Thus, Dabord passed away, and with him disappeared the chance to know what happened to Bison Dele and his girlfriend on that mysterious voyage in the South Pacific.

Read More: What Happened to Bison Dele and Serena Karlan? Where They Ever Found?