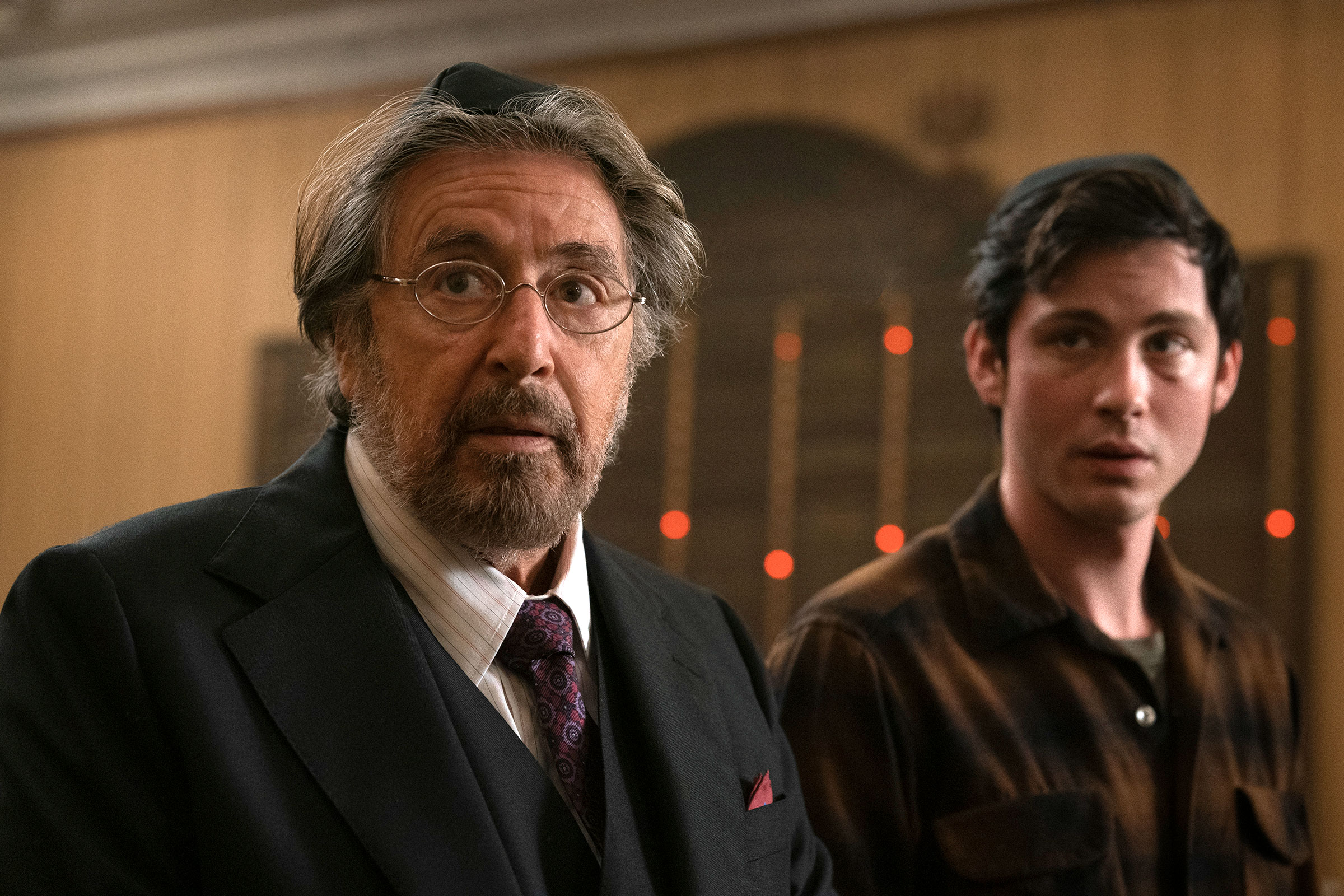 Amazon Prime’s ‘Hunters’ offers a potential-packed tale of Nazi-killing and squad action, told vibrantly with a bunch of big names attached to the project. Al Pacino and Logan Lerman headline the cast while Jordan Peele serves as the executive producer.

The series initially gives off a rather populist vibe, serving to tick off a checklist of entertaining premises. However, as the tale progresses, viewers realize that it attempts to explore multiple underlying themes. While that sounds good on paper, the show generally suffers from a “thematic personality disorder,” being unable to satisfactorily probe a single idea principally. It ends up feeling like a melting pot of incompatible ingredients.

Yet, the series has its moments and definitely scores high on the visual aspect, with top-notch cinematography, camera work and attention to period detail. Moreover, when it does get something right, the effect is resounding, helping viewers stay glued to it despite the problem of incoherence that it is marred by. Take the previous episode, for instance. It functions like a heist movie, with an intriguing planning stage followed by an intense execution phase.

However, instead of building on the success and enjoyability of the fourth episode, ‘Hunters’ once again strays away to muddled places. SPOILERS AHEAD.

The fifth episode of ‘Hunters’ starts off in Paraguay, 1976. A female doctor inspects a room full of unconscious/dead children and walks out with a big smile. Then, we move to Harlem in 1977 where Roxy’s husband argues with her regarding her employment. For the first time, viewers are introduced to Roxy’s humanistic side: she has a cute daughter and an actively protesting husband.

Jonah, on the other hand, begins training with Joe. Offerman tells him about the time “The Wolf” tortured him for 9 hours. During the ordeal, he had a chance to attack The Wolf, but his conscience disallowed him from doing so and he regrets that to this day.

Next, the team makes plans to find a certain Nazi called “The Ghost.” The plan is to target two Nazis who have settled in the USA: Dieter Zweigelt and Tilda Sauer. Dieter is to be taken care of by Jonah, Sister Harriet and Joe. The latter, on the other hand, will be handled by Offerman, Roxy and Lonny.

Morris, on the other hand, is speaking to Danny, a former employee at the Times who tried to cover a supposed Nazi living in the United States, based on Offerman’s recommendation. Then, he found another one: Dr. Fischer. However, soon, pornographic photos fo underage boys appeared in his home and his office, leading to him being boycotted by his professional and personal contacts.

Biff visits the Secretary of Commerce once again, to request her to persuade the President to inaugurate the South American sanctions bill. However, after Biff leaves, the Secretary of Commerce decides not to reverse the postponement of the bill. Jonah, on the other hand, visits Dieter Zweigelt, pretending to be a member of the Young Republicans. He manages to get Dieter’s signature which Sister Harriet compares to confirm the man’s identity.

Tobias (one of The Colonel’s men) takes pictures of Offerman since he had been the last person to meet Frederic Hauser. On the other hand, Lonny tases Tilda Sauer. When she regains consciousness, she finds herself tied with Offerman, Lonny and Roxy in front of her.

On the other hand, Joe, Sister Harriet and Jonah kidnap Zweigelt during the 4th of July celebrations at his house. Upon torturing him, they find out that the United States government had offered several German scholars employment at governmental organizations and a new life in the country, due to the imminent competition with the USSR. Sister Harriet asks if Zweigelt’s colleagues are also at the celebration.

When Dieter says yes, Sister Harriet decides to go look for them, despite resistance from Jonah and Joe (Zweigelt’s colleagues aren’t on the list). She finds one of the colleagues, Kenneth and tells him that the Juden are looking for him, in German. She leaves with Kenneth in the car, not taking Joe and Jonah with her.

Meanwhile, Offerman, Lonny and Roxy attempt to torture Tilda into giving them the Ghost’s location by force-feeding her horse feces. Tilda does not even admit to being a German and continues maintaining her identity (we do not know whether the team has mistaken her for Tilda or whether she has been holding up despite the torture). She calls Offerman “a great pretender, a clever tongue” which leads to Offerman shooting her. Lonny and Roxy are confused since Linda’s identity hadn’t been confirmed.

When Offerman, Lonny and Roxy walk towards their car, the vehicle blasts. Leich realizes that Offerman did not get killed in the blast and starts shooting at him, Lonny and Roxy. The three fire back and take cover. However, police sirens start to be heard and Leich drives away.

The fifth episode of ‘Hunters’ ends up posing several questions for the viewers without divulging much information. However, this is also the first time that we see the team not having realized their objectives by a large margin. Sister Harriet seems to be acting mysteriously as well. However, we do not yet know whether she is on the side of the Nazis. Her “betrayal” does not feel too shocking, given the fact that several hints had been thrown alluding to such an event in the previous episodes.

To be fair, the fifth episode is one of the faster episodes of the series. It is also one of the more action-heavy ones. However, the writing either seems to leave too much to the viewers’ imagination or lacks clarity. For instance, had Sister Harriet’s motifs been depicted, her strange behavior might have landed more punch. Moreover, we also witness Offerman having acted uncharacteristically ill-composed. Once again, the viewers are left to wonder why…

One of the highlights of the episode, however, is a parody of an advertisement that is played right after Zweigelt’s reveal of German scholars being hired by the American government. It provides some much-need humor amidst a heavy turn of events. Such techniques have been commonplace in ‘Hunters.’ For instance, try to recall the way the team was introduced. From a cinematic and filmmaking point of view, ‘Hunters’ should be given brownie points for being extremely self-aware. Perhaps it is too smart for its own good? Or, maybe, the show tries too hard.