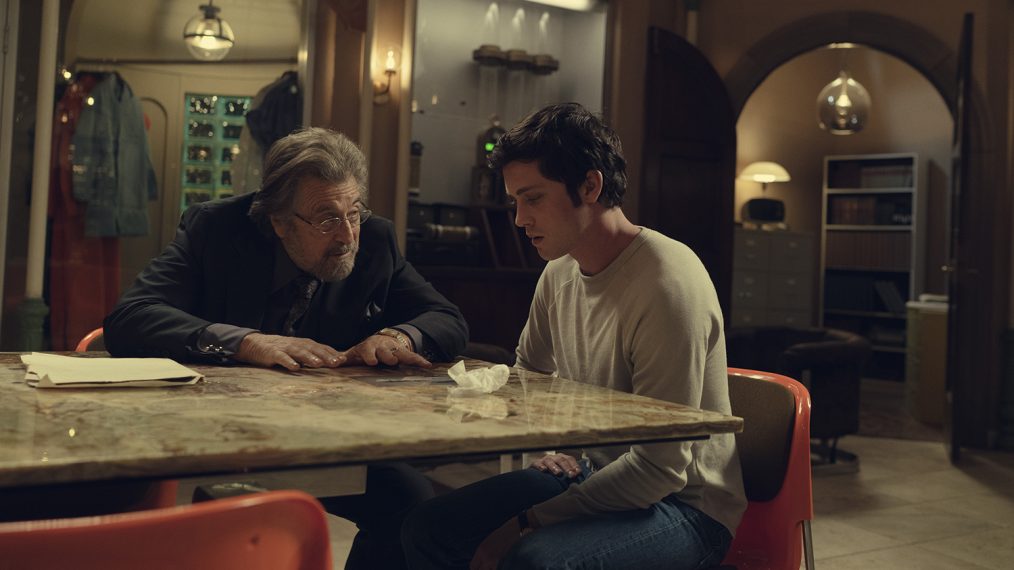 During the second part of ‘Hunters,'(Episodes 6-10) the series engages its viewers by slowly raising the bar. The show has demanded tons of patience from viewers and the eighth episode turns out to be a giant payoff. Do not miss this Al Pacino and Logan Lerman starrer at any cost. And once you jump in, do not let go! You will not regret it.

Murray’s funeral scene deserves an entire article. But we’ll stick to providing the exact dialogues of the Rabbi: “It’s no secret that in the shadows of the Shoah, Murray turned away from God as he asked “how can God exist?” The irony is that the answer to the question is Murray. A man like this is the greatest evidence of Hashem. Not the burning bush, not the great Leviathan, but a man who ushered others to safety during that subway accident last night. A man who came to my office last year, unbeknownst to Mindy and as a final gift to his faithful wife said, “Rabbi, when she’s finally succeeded in nagging me to death, I want the service in shul. I want a Jewish ceremony. Not because I believe in him, but because I believe in her.”  Rest. In. Peace.

A police officer comes to Biff’s house. Biff runs away from his house (there are two dead bodies in the house). On the other hand, The Colonel finalizes plans for the attack. It is estimated to kill 12 million people. The biological weapon is going to be introduced as corn syrup and will be present in a high percentage of consumable goods. The Colonel proceeds to insult Leich for not having killed Meyer’s team like she had asked him to.

Meyer asks Roxy to return to the team. She refuses. Jonah thinks that people around him keep dying and he must be somehow responsible. Meyer consoles Jonah and tells him why he thought he was unfit to be his grandfather. One night at the concentration camp, Meyer was dragged to the woods by the Wolf. Ruth was held at gunpoint and Meyer was blackmailed to kill 11 innocent Jews. This incident troubled him deeply.

Sister Harriet finds out that the biological pathogen, to be introduced in corn syrup kills people after 6 weeks. There is no cure for it. Morris goes to visit her mother at the hospital. She is sleeping. Morris expresses herself to Maria (she is a nurse). Morris’ mom wakes up shortly, having heard Morris’ conversation. She accepts her sexuality.

Tobias makes fun of Leich. Leich kills Tobias. The team discusses ways to stop the attack. They find out that Wernher “Rocket Man” von Braun  is on Schindler Corp.’s board. He is a Nazi who becomes a part of NASA and becomes somewhat of a celebrity.

A parody of a game show is depicted with the host asking the question, “Why do we hate Jews?” The players answer with a bunch of stereotypes. Returning to the team meeting, the team discusses how Rocket Man died a month ago but Morris thinks he faked his death.

Jonah and Meyer meet Simon Wiesenthal, a man who hunts Jews and brings them to justice through legal means. He gives them information regarding the Rocket Man’s whereabouts. Mindy starts talking to herself followed by hallucinating Murray. After a fantastical scene involving Aaron, she hands mercy to Kenneth. She kills him with one bullet instead of making him suffer. Joe, Jonah and Meyer go to the Rocket Man’s house.

Jonah threatens to torture him by electrocution. He seems uncharacteristically sinister. Even after the Rocket Man tells them the corn syrup plan, Jonah electrocutes him, thinking that he is not sharing everything.

In the reviews for the previous episodes of ‘Hunters,’ I had mentioned how the series seems to be spending too much time on exploring the ethical implications of killing Nazis cold-bloodedly. However, the eighth episode changed my mind. I am glad that they painstakingly developed that theme.

One of the reasons that the first half of the show feels sluggish is because viewers have been made too accustomed to the “aesthetics of violence.” Watching stylistic violence has made us immune, and robotic towards watching some truly heinous things. A death is not as shocking anymore. Blood does not elicit a sense of disgust.

In many ways, the persistence of ‘Hunters’ towards developing the idea of a moral compass should be commended. If popular, the series could kick-start a new age of aesthetics: one of peace and little violence. The scene between Simon Wiesenthal and Meyer is the best example of this conflict. Plus, Jonah finally being cold-blooded does not make one punch the air, as it would have, had such a scene appeared in the first half.

‘Hunters’ has drastically changed my viewpoint and that is the biggest compliment any piece of art can get. The series has been a learning experience and it deserves all the patience to unfold. Moreover, Murray’s funeral scene made me burst into tears and I am not someone who cries while watching something. The eighth episode is triumphant throughout and has multiple top-notch moments.

Read More: Where Was Hunters Filmed?