Into the Labyrinth Ending, Explained 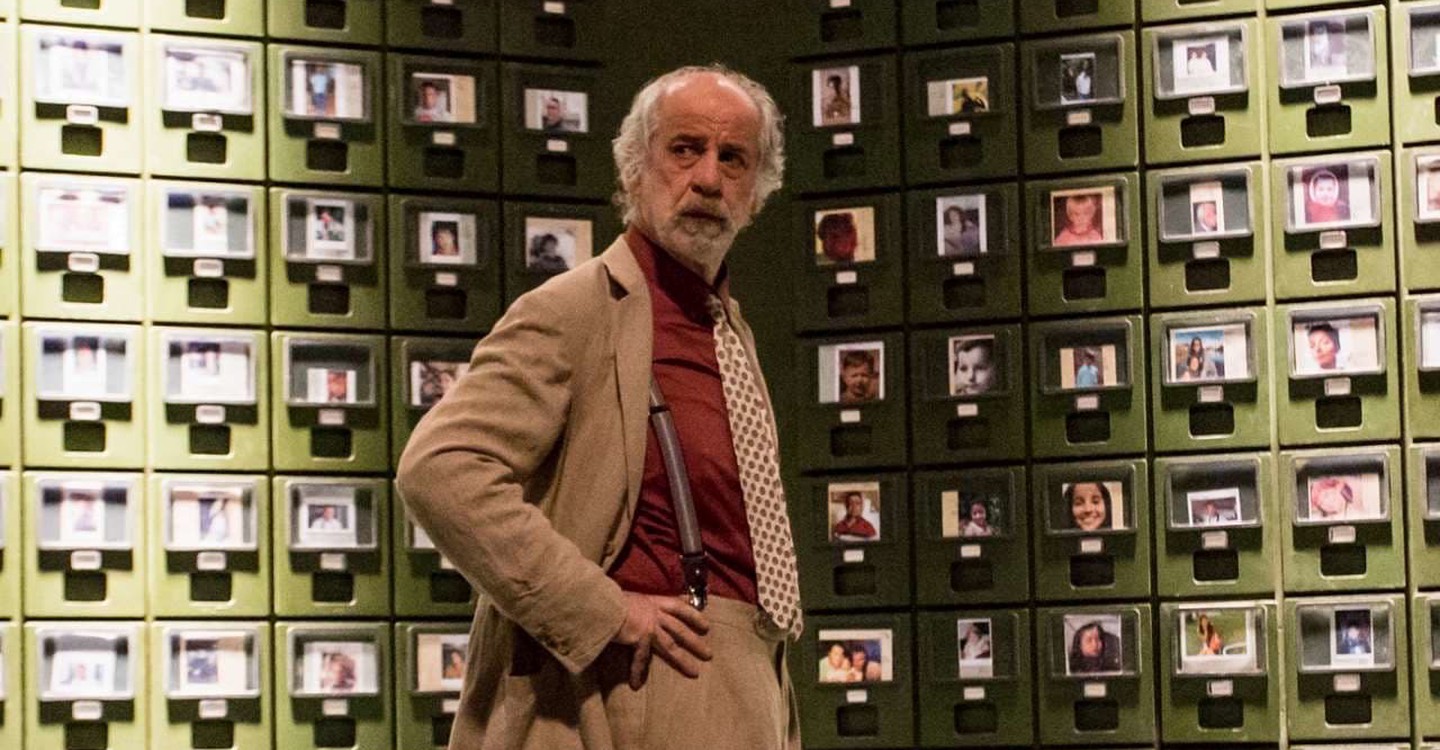 ‘Into the Labyrinth’ (original title: ‘L’uomo del labirinto’) is a mind-bending Italian thriller in which director Donato Carrisi, who also penned the novel that the film is based on, takes viewers down a dark and dreamlike rabbit hole of abductors and serial killers. The film stars Dustin Hoffman and Toni Servillo as the men looking for answers.

While Hoffman, a criminal profiler, looks for them in the victim’s mind, Servillo looks for answers by following the mysterious kidnapper’s past. The result is a roller coaster ride that refuses to be predictable at any turn. If the ending of ‘Into the Labyrinth’ left you with questions and goosebumps, we’ve got the answers for you and some good comedy to help with the goosebumps! SPOILERS AHEAD.

Into the Labyrinth Plot Synopsis

‘Into the Labyrinth’ starts with the abduction of 15-year-old Samantha Andretti whilst she is on her way to school. She is picked up by a mysterious man with large, glowing red eyes. 15 years later, she is found in a swamp, believed to have escaped from her kidnapper. Through subsequent interrogations by a criminal profiler named Dr. Green (Hoffman), we learn that Samantha was kept imprisoned in a labyrinth wherein her kidnapper would make her play games, rewarding her with food and water if she won.

However, as she notes, the games did not lead anywhere or help her get closer to escaping. As the audience, we realize that they were merely there for the entertainment of her abductor. An old, terminally ill debt collector, Bruno Genko (Servillo), is also on the trail of Samantha’s kidnapper and slowly unravels an insidious trend of child kidnappings which result in the children growing up to become kidnappers themselves.

Initially on the hunt for someone named “Bunny,” who has created a childish-looking comic featuring a rabbit, he eventually discovers there are multiple “Bunny’s” with the comic being passed on from one Bunny to the next as they abduct and subsequently criminalize their victims. The comic itself is discovered to contain dark and disturbing images when looked at with a mirror.

Things begin to spiral out of control when Genko realizes that the man he suspects to be Bunny is innocent and the real Bunny, Robin Basso, is pretending to be a victim of abduction and blackmail under his new name, Peter Lai. Before Genko can tell anyone, he collapses because of his heart infection but manages to record his findings on his voice recorder.

Meanwhile, Samantha (who is actually Mila) steps out of her hospital room only to realize that she is not in the hospital but still in the labyrinth, that Dr. Green is actually her tormentor, and most importantly, that she is not Samantha, which is what she (and the audience) have been led to believe the whole time. Mila is, in fact, a police officer who has been missing for 2 days.

Into the Labyrinth Ending: Who Are Dr. Green and Bunny?

As Mila confronts Dr. Green about being her kidnapper and asks him what he will do next, he calmly replies that he will inject her with another dose of psychotropic drugs, which will make her forget everything so they can start all over again, as they have many times. He mentions that it is his “favorite game.” Meanwhile, we see the real Samantha still in the hospital and learn that she is still in a partial coma and is unable to communicate. We also see the real Dr. Green, a much younger man, who mentions that Samantha will forever remain trapped in her nightmare.

Fortunately, before he dies at the hospital, Genko drops his tape, which is picked up by the hospital staff, leading to the arrest of Samantha’s kidnapper, Robin Besso. Mila is also able to briefly disable her kidnapper and finds her way out of the labyrinth, emerging from a remote wooden hut surrounded by snowy mountains. We then realize that she is the police officer Mila Vasquez who has been missing for a few days.

Just as she emerges from the hut, she remembers her daughter’s name, signifying that her memory is slowly returning, and starts running away from the hut. In the closing scene of the movie, we see both Dr. Green (the kidnapper) and Genko sitting at a bar as news of Samantha’s discovery and Mila’s disappearance plays in the background. The former mentions that he designs labyrinths, which seems to confuse Genko as he walks out, leaving the kidnapper sitting alone, smiling to himself.

The old man pretending to be Dr. Green remains nameless throughout the movie as we mostly see him in his interactions with Mila, pretending to be a criminal profiler. The only other times we see him are when Mila sees him in his “office” in the labyrinth, where he is making notes of their conversation, surrounded by many tapes, mannequins, and even a surgery chair, and when he briefly speaks with Genko at the bar.

From what we can gather, he is a highly efficient and sadistic serial kidnapper who has taken many victims, as is proven by the large number of tapes in his office and the elaborate setup that torments his victims. Given his demeanor and fascination with labyrinths, he is most likely highly educated and possibly a respected member of the community, keeping his dark and sadistic hobbies well hidden. We also briefly see a sketch resembling his face on Mila’s desk, telling us that she was on his trail but ended up getting abducted by him.

The real Dr. Green, of course, is the young doctor briefly seen in the hospital examining Samantha. Bunny is not just one person, but refers to the person who, kidnapped and introduced to the dark comic as a child, is now a serial killer and kidnapper. The current Bunny, Robin Besso, was kidnapped for 3 days as a child, after which his parents gave him up for adoption, and he was later found burying rabbits alive at his foster home. During most of the movie, he is portrayed as Peter Lai, a respectable dentist with a family, until Genko discovers that he is, in fact, Bunny.

Before Besso, Bunny was a man named Sebastian, a sexton at a church near the spot where Robin Besso was abducted as a child. Sebastian, whilst speaking to Genko, mentions that he was abducted as a child and given the Bunny comic. It is not clear whether Samantha will continue the Bunny legacy and become a disturbed kidnapper, but since she is most likely not Besso’s only victim, the Bunny legacy will likely be carried on by one or more of Besso’s other victims.

It is interesting to note that though the movie focuses on one heinous kidnapper, near the end, we realize that there is another completely different and possibly more dangerous kidnapper on the loose in the form of Dr. Green. The parallel storylines, which pretend to be one storyline for most of the film, show us the origin story of one kidnapper (Bunny) whilst giving us details of how the other kidnapper (Dr. Green) torments his victims. It is fitting and very chilling to realize that even if one kidnapper is apprehended, other twisted ones are still hiding in plain sight. This is also a callback to the name of the film, wherein “Labyrinth” emphasizes the dark and confusing world of criminals that the investigators must navigate.

What Happens to Samantha and Mila Now?

Samantha, after her traumatic kidnapping and 15-year imprisonment, during which she was given psychotropic drugs, seems to be in a partial coma at the hospital and is unable to communicate or move. The real Dr. Green mentions that she will probably never be normal again and will be “forever trapped in a nightmare.” It is symbolic that right after the real Dr. Green mentions this, we see Mila discover that she is not in a hospital but still inside the labyrinth. The labyrinth, apart from being Mila’s prison, also signifies Samantha’s mind inside which she is trapped.

Mila, though we see her escape and begin to recover her memory, is not out of danger yet. Considering that she knows the location of Dr. Green’s (the kidnapper) lair and what he looks like, it is unlikely that he will let her escape so easily and endanger himself getting caught. We also see Samantha’s feet seriously injured, something that is emphasized twice, once when she steps on glass and second when she leaves bloody footprints in the snow as she tries to get away. This hints at the fact that she is still very vulnerable and will likely be caught by her kidnapper again.

Are Samantha and Mila’s Abductions Connected?

Samantha and Mila’s abductions are most likely not connected as they are kidnapped by different men and kept imprisoned in very different places: Samantha on a boat in the middle of a swamp, and Mila in an underground labyrinth located in a snowy, mountainous region. The only common thread that we see in both the kidnappings is the intense mental trauma that they are both put through.

Whereas Mila has suffered vivid hallucinations that have made her forget almost all of her reality but still allow her to function and communicate, Samantha is said to be permanently impaired and cannot even speak, being trapped within a nightmare in her mind. The “labyrinth,” apart from its obvious connotation in the movie as Mila’s prison, also emphasizes the labyrinth of the mind that both women, and possibly many other victims, are inescapably trapped in.

The reason that the two kidnappings, despite not being connected, are shown in parallel is to explore their effects on the victims. Director Carrisi has created more than a storyline. He has created a nightmarish world of abductors and serial kidnappers within which he describes the permanent effects that being kidnapped has on the victims, something that is referred to as being “infected by the dark.” On multiple occasions in the movie, it is noted how, when those that are held hostage finally escape, they are reborn and are not the same person that they were before.

This is also seen within the “Bunny” storyline, which seems to have been going on for multiple generations, with a disturbed victim growing up and kidnapping or traumatizing a child who then grows up disturbed, forming a never-ending cycle. Another concept explored is that of the “sadistic console,” which describes the kind of criminal Dr. Green is. A “sadistic consoler,” as a police officer in the film chillingly describes, is one that abducts but doesn’t kill their victim, instead wanting to get their victim to love them.

This seems to be a play on the widely known Stockholm Syndrome and can be seen in Dr. Green’s gentle treatment of Mila, even though he has kidnapped her. Even when she finds out and confronts him with the fact that he is her twisted kidnapper, he remains polite. We also see Dr. Green purposely tormenting Mila by calling her and pretending to be from the pizzeria which she had described just moments before.

‘Into the Labyrinth’ explores the myriad ways in which criminals perform the act of kidnapping and the long-lasting effects it has on victims. The overarching theme of the movie is, therefore, abduction, a point further emphasized by the dramatic missing persons department, also called “Limbo,” that is frequently portrayed in the film.