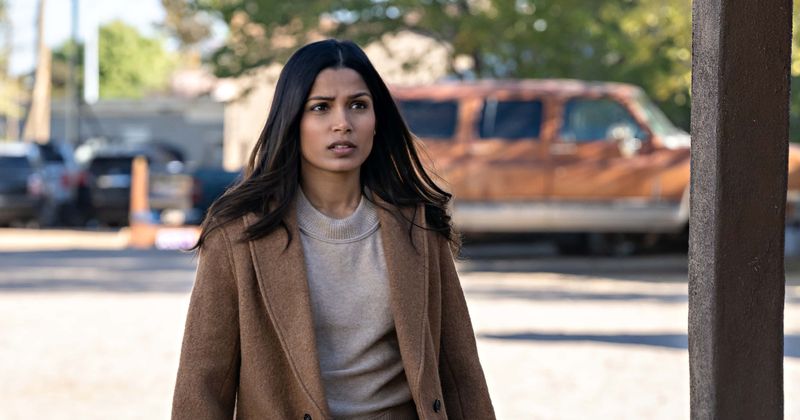 How well do you know your nearest ones? Directed by Adam Salky and based on a script written by Chris Sparling, ‘Intrusion’ is a slow-burning and scary home invasion thriller movie that turns the genre on its head, while attempting to ask this essential question. The story revolves around a seemingly perfect husband and wife who move into a lush villa in the middle of nowhere. A break-in incident mars some of the peace of their serene abode. After probing further into the mystery, the wife discovers that the house unearths some deep dark secrets.

With beautifully articulate cinematography, a sobering plot, and stellar acting on the part of Logan Marshall-Green and Freida Pinto (of ‘Slumdog Millionaire’ fame), the film holds enough twists to engage genre fans. If you seek to revisit the devastating finale of the movie, let us go back to the scene of intrusion. SPOILERS AHEAD.

Husband and wife Henry and Meera live in a state-of-the-art villa in the middle of a vast mountainous landscape in Corrales, New Mexico. They have moved in from Boston, Massachusetts, where Henry worked as an architect. He has designed his own house. On the other hand, Meera is a therapist by profession, although she has her own trauma as a cancer victim to resolve. Henry takes Meera out one night for dinner, but they return home to find out there’s been a break-in.

The incident instills fear in Meera. Like a loving husband, Henry reinforces a security mechanism on all the entrances with a centralized access point – he can lock and unlock doors by tapping his cellphone app. However, the measures are not enough to deter the intruders, and they make their way into the home dead at night. Henry is seemingly prepared for this moment, as he has a gun hidden in a vase. He takes the gun out and mugs up the courage to face the goons.

He lets Meera down with a rope and urges her to escape. As Meera flees, the delinquents have seemingly captured Henry. But Henry comes out alive from the conundrum, killing off all the intruders in the process, barring one. Meera gets upset when she finds her husband being nonchalant about the murders, but she is in for another devastating surprise about Henry. The revelation makes Meera reassess their seemingly perfect relationship.

When the police embark upon the investigation of the break-in incident, they find a suspicious pattern. All of the invaders belong to the same family – all of them are brothers to Christine Cobb, a local girl who has been missing for some time. The family in question is from the poverty-stricken Eagle Point area of the town. The revelation raises questions in Meera’s mind, as it would in the sense of any rational being. Meera does not want the housewarming party to happen after the incident, as she is traumatized by Henry’s wrath on the intruders.

The intruders are dead from the encounter, barring one still fighting for his life at the hospital. However, Henry thinks that the housewarming party would do them good, and Meera would be able to take her mind off the seeming burglary. On Sunday night, Henry goes out with the excuse of buying supplies for the party, and after attempting to call Henry, Meera follows him with her car. She sees Henry veering off the road towards the hospital, and the following morning, the sheriff gives her the news of the last intruder’s death.

This coincidence sends Meera off on a sprawling mission to uncover the truth. The home invasion trope turns on its head as Meera realizes that the threat is much closer to the home. Scouring Henry’s office, Meera finds an envelope with Henry’s stamp addressed to one Dylan Cobb. She also enables the tracking device to discover that Henry has occasionally visited Eagle Point, the neighborhood where Christine Cobb once lived with her now-deceased brothers. Meera goes to the same community where she is threatened by a man who was among the suspects for the break-in. Following the trail of Dylan Cobb, she retrieves a camcorder. But after the encounter with the man, the camera incurs some damage.

Back at home, Meera looks at the video – which is a confession of Dylan Cobb. However, she cannot hear much since the camcorder is damaged. She takes the trouble of buying another video cam to listen to the video. In the confession, Dylan claims to know the identity of his daughter’s abductor, despite what others may think. Shocked and desperate for the truth, Meera goes to Henry’s office and finds a pen drive. The drive contains the blueprints and construction images of the house. Scouring the heap of documents, Meera comes across a photo of Dylan Cobb. Dylan was a worker who helped in the construction of the house. Following a restless night, Meera confronts Henry about the findings.

Henry makes a case about him falsely showing to his superiors that he made the house himself. According to Henry, this stance saved him a lot of money that would otherwise be spent paying the workers. Although Henry makes Meera think that the case is about a working-class grievance against an affluent employer, Meera is not convinced. However, she comes to realize her fault and gives her consent for the party. But at the party, Meera resumes her investigation after listening to the complete confession of Dylan Cobb.

Dylan says that his girl is in Henry’s office, and it does not seem like a far-fetched claim at that time. Scouring the cabinets in his hubby’s office, Meera retrieves the blueprint of the house and discovers a hidden passage. In a dramatic revelation, Meera goes down the secret stairs to see her worst fear coming true. The dungeon shelters Christine Cobb. Henry has custom-built the underground complex to hold people (read poor teenage girls) captive. With some help from Meera, Christine flees the scene at the end, while Henry gets his due.

Is Henry Dead or Alive? Is He A Psychopath?

Henry is a cold and composed character who reminds one of Patrick Bateman’s menacing eccentricities in ‘American Psycho.’ The resemblances are unmistakably there, with some classic shots that directly hark back to the earlier movie (consider the ominous tracking shot from the back). At first glance, Henry comes off as empathetic and understanding – in other words, a perfect gentleman. However, as the story moves forward, the cracks and fissures in his character become visible.

Henry admits that his sadistic nature is a sickness in the final confrontation, much like Meera’s cancer. At this association, we realize that Henry is devoid of any humane emotions. Henry uses Meera’s battle with cancer as an excuse for his abduction and abuse of Christine. As Meera was sick, Henry seemingly went through a lot and thus chose to abduct teenagers as a side hobby.

Christine divulges to Meera that Henry occasionally comes to the dungeon and sits on the chair before Christine with a baseball bat. He only has one sentence to say – “I decide when.” There is just something in his character that does not sit well with the audience right from the beginning, and later we come to know that his “loving husband” nature is a façade. Under the veil of a loving husband, he comes off as a sadistic, erratic, and aberrant personality.

While he tries to normalize his actions, the audience cannot sympathize with his repressed desires. However, in the final confrontation, Henry gets his due, and it is a long time coming. Meera bashes Henry on the head with his Boston souvenir, and in the final scene, he becomes inanimate. Although it is not explicitly told, the finality suggests that Henry is dead. After the death of Henry, Meera sells off the property and drives off into the horizon.