Iron Chef Brazil Season 1: Where Are They Now? 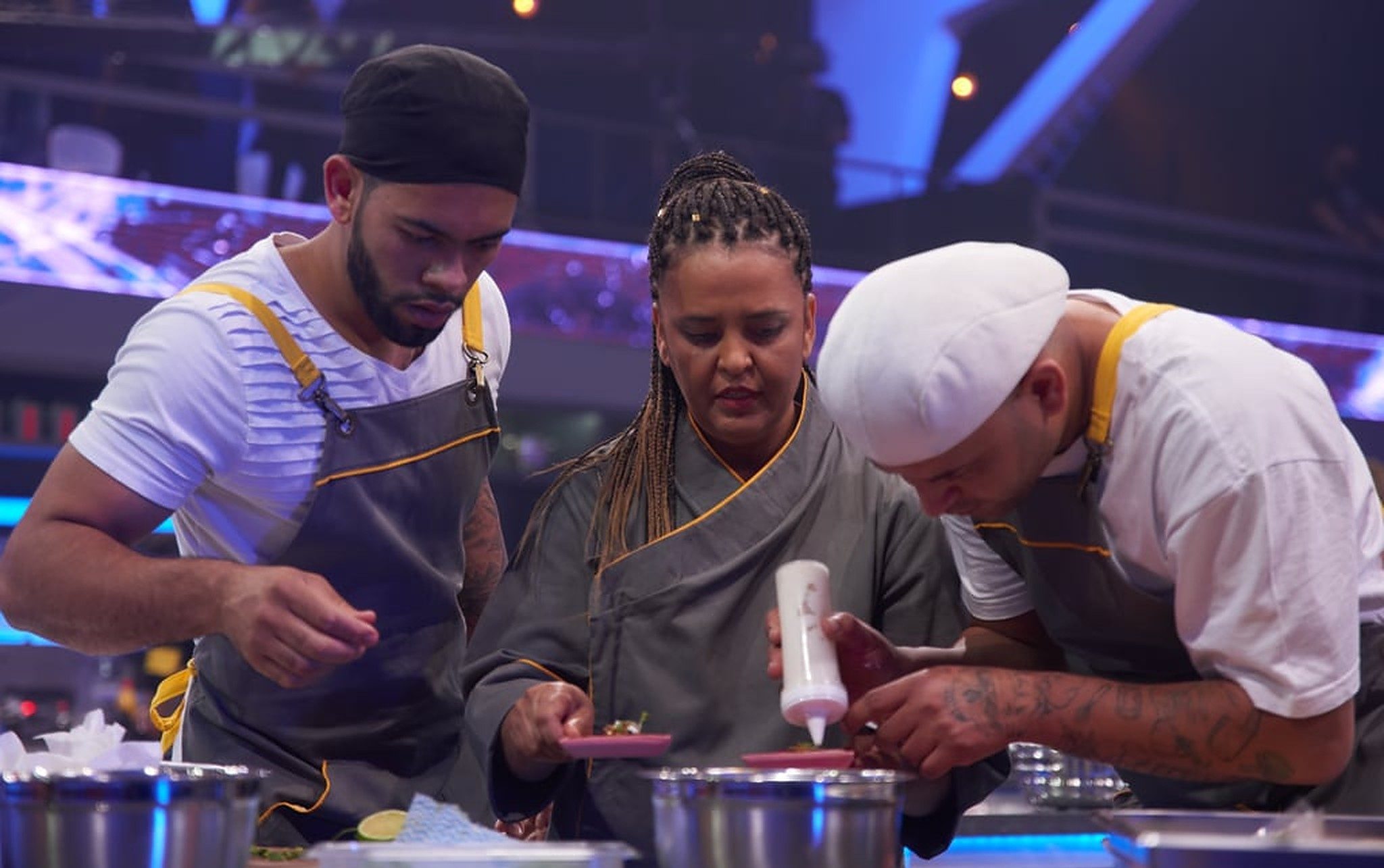 ‘Iron Chef: Brazil’ is an interesting competitive cooking show that takes the best and brightest from Brazil’s culinary industry and pits them against rising stars who have just started to make a name for themselves. While the stalwarts are grouped as the Iron Chefs, they are faced by the challengers in several themed battles throughout the season. Ultimately, the challenger who defeats his Iron Chef with the most amount of points gets to compete against five of them for the trophy in the season finale.

Season 1 of ‘Iron Chef: Brazil’ provided us with quite a few thrilling moments as we witnessed Iron Chefs impressing us with their mastery or challengers besting the stalwarts through sheer determination and technique. Nevertheless, with cameras now turned around, fans are curious to know where the cast members are at present. Well, let’s find out, shall we?

Where Is Chef Bel Coelho Now?

Bel Coelho found her passion for cooking from a young age and graduated from the Culinary Institute of America before working with some top chefs at popular restaurants. Additionally, she even decided to gather knowledge from local sources and traveled to several Brazilian cities to learn more about regional cuisine. Currently, she seems to be based in São Paulo, where she owns and operates her restaurants Cuia and Clandestino Restaurante. Additionally, Bel hosts the show ‘Receita de Viagem’ on TLC Discovery.

Where Is Chef Carole Crema Now?

An expert at baking and sweet dishes, Carole Crema, surprised all with her incredible dishes on ‘Iron Chef: Brazil.’ A graduate of Thames Valley University, she further studied at The Mosimann Academy in London and Instituto La Cultura Alimentari in Milan. Moreover, she has authored the book ‘O Mundo dos Cupcakes’ and appears as a judge on the TV series ‘Que Seja Doce.’ Carole seems to be currently based out of São Paulo, where she runs her restaurant and offers cooking classes for people who want to work on their baking skills.

Where is Chef Felipe Schaedler Now?

A master of fish and seafood, Felipe received the Order of Cultural Merit in 2012 and was featured in Forbes 30 under 30 list in 2014. He seems to divide his time between São Paulo and Manaus and has several popular restaurants. Felipe’s flagship restaurant, Banzeiro, has two branches in São Paulo and Manaus, while the Iron Chef also runs the Manaus-based Moquém do Banzeiro, which offers a fine-dining experience in a casual setting. On the other hand, he is quite happy in his relationships as he has built a life surrounded by family and friends and can often be spotted sharing the memories he makes on social media.

Where Is Chef Giovanna Grossi Now?

One of Brazil’s most celebrated chefs, Giovanna Grossi, got the chance to represent Latin America in 2016’s Bocuse d’Or when she was just 23 years of age. Over the years, she perfected her craft and earned the prestigious position of a Bocuse d’Or judge. Currently, Giovanna likely resides in São Paulo, where she runs her flagship restaurant, Animus Restaurante. Additionally, she appeared in the Forbes 30 under 30 list and currently holds the position of president of Bocuse d’Or Brasil.

Where Is Chef Rodrigo Oliveira Now?

One of the most popular chefs in Brazil, Rodrigo Oliveira, is in a happy relationship with his partner, Adriana Salay. Besides, the chef resides in São Paulo, where he owns and operates the celebrated and award-winning restaurants, Mocotó and Balaio IMS. Additionally, in 2021, Rodrigo expanded his culinary empire and opened the Brazilian-themed restaurant Caboco in Los Angeles, through which he hopes to introduce Brazilian soul food to the United States.

Where Is Chef Thiago Castanho Now?

Thiago Castanho is a brilliant chef known best for combining traditional Brazilian cooking techniques with a modern style. Interestingly, he and his brother Felipe discovered their love for cooking when their father established the seafood restaurant, Remanso do Peixe in Belem, Brazil. Thiago seems to be living in Belem, where he still has a hand running his father’s restaurant. Apart from this, the chef has studied the Amazonian region’s cuisine for 15 years and recently even participated in a live cooking show in the Brazil Pavilion at Dubai’s Expo 2020.

Where Are Chefs Lisiane Arouca and Fabrício Lemos Now?

Husband and wife duo Lisiane and Fabrício share a beautiful dynamic inside and outside the kitchen. While their chemistry makes it easier for them to work together, the couple also enjoys a wonderful personal life surrounded by family and friends. At present, Lisiane and Fabrício reside in the city of Salvador in Bahia, where they run Grupo Origem, wherein they own and operate several popular restaurants, including ORI, Origem, Gem Bar, and Omí.

A brilliant chef in his own right, Adriano De Laurentiis’s passion for cooking is made quite apparent through the mouthwatering creations he shares on social media. The young chef is quite private about his personal life, but from the look of it, he presently resides in São Paulo, Brazil, where he heads his flagship restaurant, Cais. As of February 2020, Adriano was in a relationship with Juliana Alves.

Where Is Chef Bianca Barbosa Now?

Hailing from a close-knit family, Bianca has maintained a solid bond with her parents and holds them responsible for the success she has achieved to date. Furthermore, she appears to enjoy a wonderful personal life and is a loving mother to an adorable 5-year-old. Besides, Bianca describes herself as a chef and bar owner and currently resides in Rio de Janeiro, where she owns and operates her establishment, Bar Kalango.

Interestingly, it took Ieda some time to discover her passion for cooking, and she completed her course in Gastronomy when she was 42 years old. However, she never let her age stop her from living her dreams and was determined to reach the very top. Currently, Ieda is happily married, a mother of one, and lives with her family in São Paulo, where she runs her popular restaurant, Casa de Ieda.

Where Is Chef Michele Crispim Now?

Michele Crispim stepped into the limelight when she competed and won ‘Masterchef: Brazil’ season 4. Although she was a commercial manager before embarking on a cooking career, she soon embraced her passion for gastronomy and began passing one milestone after the other on the way to success. At present, Michele seems to be residing in Brazil and is involved with the Rede TV show ‘Cake Boss’ as well as ‘Esse Doce Tem História’ on GNT. Moreover, she has been gathering quite a fan following as a chef and food influencer on social media.

Where Is Chef Paolo Rocha Now?

A resident of São Paulo, Brazil, Paolo now works as the pastry chef at several top-end restaurants, including President, Çá-Vá, Lvtetia, and Buteco. Besides, he loves sharing his creations on social media and is involved with the show ‘Esse Doce Tem História’ on GNT. Not just that, fans would be delighted to know that in August 2022, Chef Paolo announced that he and his partner, Stella Kiss, were about to welcome their first child into this world.

Where Is Chef Rafael Gomes Now?

Although Rafael began his culinary journey in the United States, he currently shuttles between Paris and Brazil as his cooking empire is spread over two continents. The incredible chef owns and operates two branches of his restaurant, Itacoa, in Paris and Rio, along with the Rio-based pork specialty restaurant, Porquinho. Besides, the chef announced that he would soon be opening his fourth restaurant, Tiara, which would provide a fine-dining experience. Additionally, viewers would be delighted to know that Chef Rafael is currently in a relationship with his partner, Fernanda Rubatino, and is focused on taking his career to new heights.

Where Are Walkyria Fagundes and Ygor Lopes Now?

Although Walkyria and Ygor started their respective culinary journeys independently, they met in São Paulo and soon commenced a fulfilling relationship. Currently, the couple has made the city their home and put their skills together to serve incredible food. Walkyria and Ygor now own and operate their restaurant, AE! Cozinha, which has been growing in popularity since its inception in 2019.