Netflix’s Iron Chef Season 1: Where Are They Now? 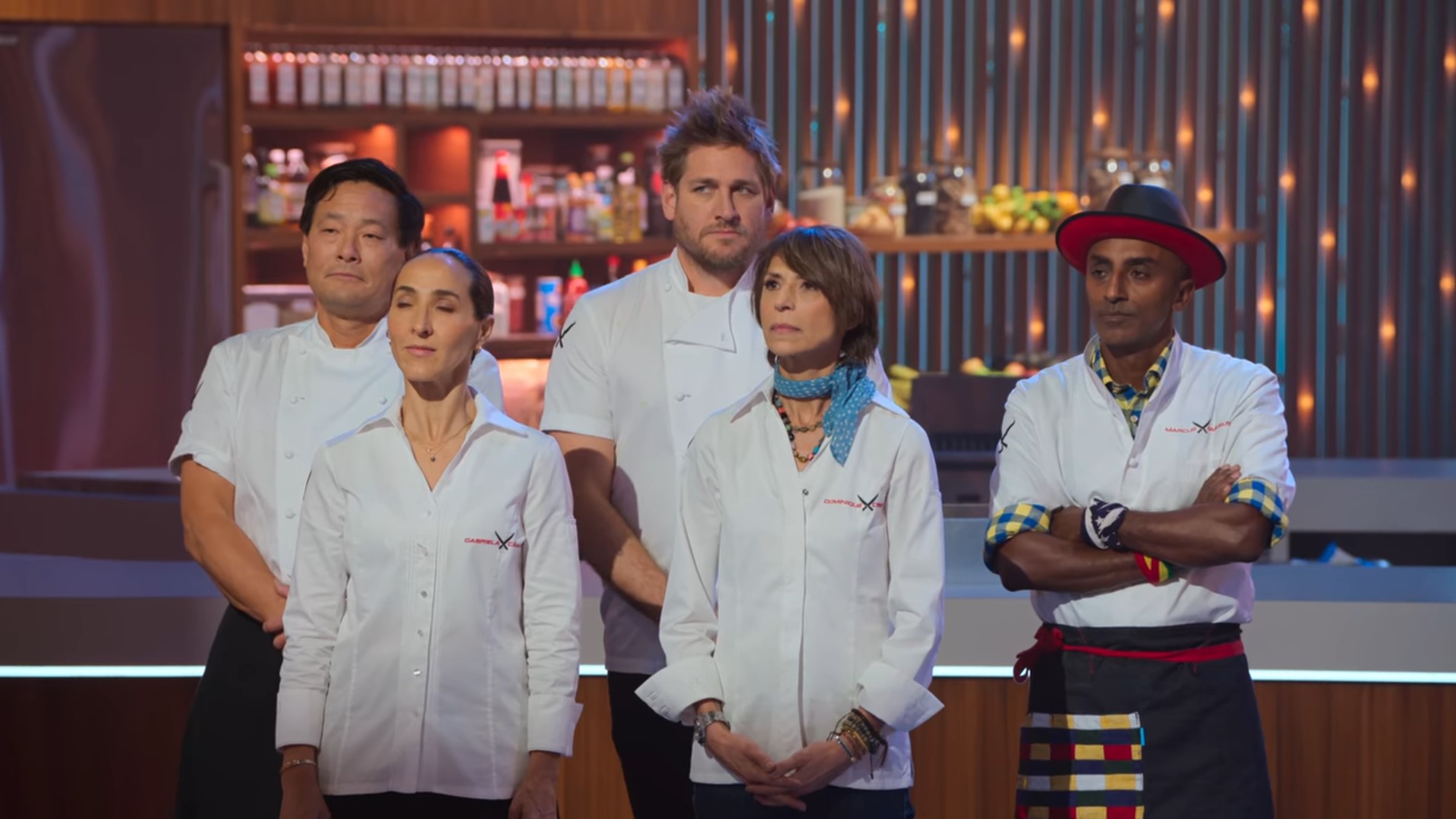 Borrowing elements from the original Japanese TV show titled ‘Iron Chef,’ Netflix’s ‘Iron Chef: Quest For an Iron Legend’ brings together a group of icons from the food industry and has them go up against promising challengers determined to earn further fame. Each episode features a fierce cook-off between an Iron Chef and a challenger, where they are asked to stick to a specific cuisine and incorporate a secret ingredient in all their dishes. Ultimately, the challengers have their performances evaluated, and the one with the most points gets to take on all the Iron Chefs in a fight for the Iron Legend title.

While season 1 of ‘Iron Chef: Quest For an Iron Legend’ introduced us to five stalwarts in the food industry, we also got to meet several promising challengers who have taken the world of food by storm. Nevertheless, with the cameras now turned away, let’s find out where the cast is at present, shall we?

In an effortless display of mastery and skill, Ming Hao Tsai took on two chefs at once in the live Sturgeon challenge and still came out on top. Currently, Ming Tsai is based out of Boston, from where he runs MingsBings, a company that produces delicious plant-powered pockets. Additionally, Tsai partnered up with Goldbelly and Yellowstone Club to increase his reach as a chef. Interestingly, the Iron Chef is also quite an active social worker, as he currently serves as the Chairman of the National Advisory Board for Family Reach, a non-profit that helps cancer patients with their treatments.

The first and only woman in the US to win three Michelin Stars, Dominique Crenn wowed everyone with her mastery over the art of cooking. Currently, she is based out of San Francisco, California, from where she runs her three-Michelin-starred restaurant, Atelier Crenn. Additionally, she owns and runs Bar Crenn, an upscale wine bar located adjacent to her signature restaurant. Besides, Dominique’s popularity and talent paved the way for the chef to bag a seat at the table at the top.

The celebrated chef has appeared on several popular TV shows, publications, and YouTube channels. In 2021, Dominique Crenn received the World’s 50 Best Icon Award. Although she has been diagnosed with breast cancer in the past, the French chef seems to be well on the way to recovery. Moreover, Dominique’s personal life is pretty blissful, as she is engaged to actress Maria Bello.

Marcus Samuelsson is a resident of Harlem, where he serves as the head chef of his restaurant, Red Rooster. He is also a partner at the Madison Square Garden restaurant, Streetbird Express, and is a co-founder of the Harlem EatUp! Festival. Moreover, Apart from running several restaurants under his command, Marcus also operates the Marcus Samuelsson Group, through which he offers once-in-a-lifetime culinary experiences. The Ethiopian-born Swedish-American chef’s determination and tenacity earned him the success he enjoys today, and we hope he keeps thriving in the years to come.

Gabriela owns and operates a host of fine dining restaurants, including the Mexico-based Contramar, Entremar, Caracol de Mar, Itacate del Mar, and her signature restaurant in San Francisco named Cala. Interestingly, apart from authoring the cookbook ‘My Mexico City Kitchen’ in 2019, Gabriela also had a documentary titled ‘A Tale of Two Kitchens’ made on her life. Moreover, in the same year, the Mexican Chef also got an opportunity to be a part of the Mexican government’s Council of Cultural Diplomacy. Gabriela currently divides her time between the US and Mexico but still finds time to host an online class on Mexican cuisine.

Like most other Iron Chefs, Curtis Stone also has an expansive culinary empire. He heads popular restaurants like Gwen, Maude Restaurant, the Dallas-based Georgie, which also doubles as a butcher’s shop, and The Pie Room by Gwen. Additionally, the Australian chef dipped his toes into the life of an entrepreneur and currently heads the event management company Curtis Stone Events, as well as Cook With Curtis, a company through which he launched his non-stick line of kitchenware. As far as his personal life is concerned, Stone is happily married to Lindsay Price, and they are proud parents to two adorable kids.

Where Is Chef Mason Hereford Now?

A post shared by TURKEY AND THE WOLF/mason h (@turkeyandthewolf)

Mason is based out of New Orleans, where he owns and operates his restaurants, Turkey and The Wolf and Molly’s Rise and Shine. Both restaurants are known for their casual yet retro flair and serve some good comfort food, including burgers, sandwiches, and pizza. Moreover, the sandwich maestro has also been featured on several renowned TV shows and publications, as his biggest claim to fame were his unconventional sandwiches. Besides, from the looks of it, Mason has built a happy life surrounded by his family, and we wish him the best for the years ahead.

Where Is Chef Esther Choi Now?

Based out of New York City, Esther Choi runs her popular Korean eatery, Mokbar, which has three branches in Chelsea Market, Brooklyn, and Midtown. Moreover, plans are also in motion to take Mokbar out of NYC, as Esther wants to expand into the neighboring state of New Jersey. Besides Mokbar, the Korean chef is closely involved with the NYC-based cocktail bar, Ms. Yoo, and she also runs a popular YouTube food channel with a significant fan following.

Where Is Chef Curtis Duffy Now?

Curtis Duffy resides in Chicago, Illinois, where he keeps himself busy as the Executive Chef of his own two-Michelin Star fine dining restaurant, Ever. While Curtis is supported by his business partner, Michael Muser, in running Ever, the Michelin Starred chef started Rêve Burger in 2021, which will, unfortunately, close its doors in July of 2022. Curtis is also a proud father and has built a happy family with his wife, Jennifer Duffy. Witnessing Curtis’ successful life is quite inspiring, and we hope success never eludes him in the long run.

Where Is Chef Claudette Zepeda Now?

Claudette previously worked as the Executive Chef of Alila Marea Beach Resort Encinitas’ poolside bar, The Pocket, and their global restaurant, Vaga. However, she gave up the job in 2022 and got comfortable in a consultant role with the same resort. Moreover, she was an integral part of the 2022 Aspen Food and Wine convention and currently resides in San Diego with her husband, son, and daughter.

Where Is Chef Yia Vang Now?

Currently, Yia Vang runs the popular Minneapolis-based pop-up restaurant Union Hmong Kitchen, through which he upholds the Hmong culture by making food that helps build conversation and community. His efforts at combining culture and tradition with food were also recognized as the James Beard Foundation chose him as one of the finalists for their Best Chef: Midwest award. Besides, the Hmong chef is also ready to turn to a new chapter in his life as his signature restaurant, Vinai, will open its doors in 2022. Born in a Thai refugee camp, chef Vang’s rise to the top is quite inspirational, and we hope he finds success in all his future endeavors.

Where Is Chef Gregory Gourdet Now?

Gregory currently resides in Portland, Oregon, where he launched his live-fire restaurant, Kann, which combines fine dining and modernity with authentic wood-fired Haitian cuisine. In 2022, Gregory won the James Beard Foundation’s Best General Cookbook award for his book ‘Everyone’s Table Cookbook.’ Although the celebrated chef of Haitian descent has a happy personal life, he had a health scare in December 2021, when he was diagnosed with a meniscus tear. Nevertheless, we are delighted to report that Gregory is now well on the way to recovery after undergoing a double meniscus surgery.

Where is Chef Mei Lin Now?

Chef Mei Lin is currently based out of Los Angeles, California, where she runs the chicken restaurant, Daybird. Moreover, she also owns and operates the company UMAMEI, through which the chef sells self-made chili oil and XO sauce. Mei Lin’s career skyrocketed after she was crowned the winner of ‘Top Chef’ season 12, and we hope she finds all the success she wants in the years to come.

Read More: Where is Netflix’s Iron Chef: Quest for an Iron Legend Filmed?