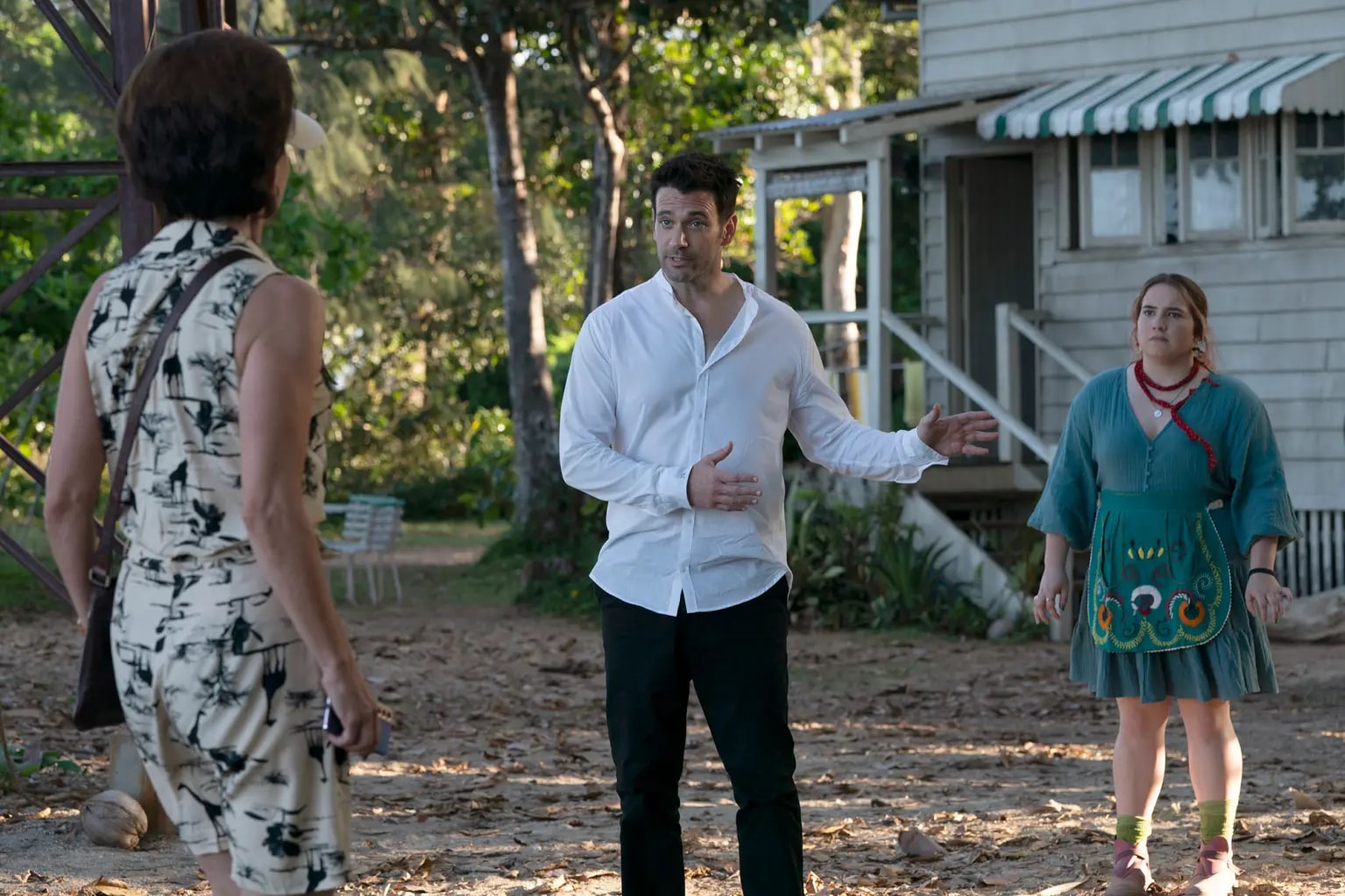 A lost soul inadvertently finding themselves in a remote but picturesque town and then undergoing a process of self-discovery while helpings the townsfolk is almost a tired trope. Countless films and TV shows have been made on a similar subject matter. There is even a show where a man pretends to be a pastor to hide from a dangerous group of people — TV Land’s ‘Impastor,’ starring Michael Rosenbaum. But what sets Peacock’s comedy-drama series ‘Irreverent’ apart from that 2015 show or any other similar project is that the former oozes this earnestness that has been lacking from TV for a long time.

The plot of ‘Irreverent’ revolves around Paulo Keegan (Colin Donnell), an elite mob negotiator from Chicago, Illinois, who is forced to travel to Clump in Queensland, Australia, and become the reverend of the local church after he ends up killing his boss’ son. As much as he is reluctant to embrace his new circumstances, he ends up being a force for positivity in the beach town. Here is everything you need to know about the ending of ‘Irreverent’ season 1. SPOILERS AHEAD.

In Clump, a minister is eaten by a salt-water crocodile while officiating a wedding ceremony by the sea. In two years, this is the third minister to be killed in Clump in a bizarre incident. As the residents wonder whether another minister will ever come to Clump, the scene shifts to Chicago, where Paulo tries to negotiate with one of the rivals of Lorenzo, his boss. It almost works, as the man agrees to take $1.8 million to end the feud. But then, Lorenzo’s son Guido makes his presence known and starts shooting. While the others are shot, Paulo succeeds in going behind Guido and hitting him with a brick, killing him.

It doesn’t take Paulo long to realize that he is a dead man walking. No matter how many times he has proven his worth to Lorenzo, he will not forgive his son’s death. And also, there is Lorenzo’s wife Antoinette to consider, who terrifies Paulo more than even her husband. After consulting with his friend Louis, Paulo decides to go to the other side of the world, which happens to be Australia. On his way there, He meets Mackenzie Boyd ( P. J. Byrne), a priest whose wife has run away with her used-car salesman of a lover when she was supposed to board the flight to Australia with her husband.

A grief-stricken MacKenzie begins talking to Paulo on the plane as their seats are right next to one another. They later discover that they are staying at the same hotel, which MacKenzie claims is fate. After a night of heavy drinking, Paulo discovers Mackenzie is gone and has taken the money with him. The only thing the man has left behind is his clerical attire.

Having no other option, Paulo decides to go where Mackenzie was originally heading, Clump, believing that he can find more about the man from his things which have already arrived in the town. Meanwhile, Lorenzo and Antoinette send Farah, the best assassin on their payroll, after Paulo.

Arriving in Clump, Paulo initially doesn’t know what to do. He has never been religious and doesn’t know any of the scriptures. His life experiences have left him with such a realistic view of the world that even pretending to have the inherent optimism of a preacher is tiresome for him.

Despite this, Paulo succeeds in keeping up the pretense, primarily due to his unmatched negotiation skills. In each episode of the first season, he has to deal with a different problem. Regardless of what it is, he manages to solve the issues in one way or the other — be it officiating a wedding or a funeral, settling a blood feud, or stopping the church from being sold to a man who intends to use the property to set up a cell tower.

Paulo also makes friends. He befriends Daisy (Tegan Stimson), a young woman who has been allowed to live on the church property by successive ministers because she doesn’t have a home of her own. As she figures out Paulo isn’t who he says he is, she eventually becomes his partner in crime. Paulo also grows close to Piper (Kylie Bracknell), the sharp and brilliant local sheriff. While she already has a boyfriend, with whom she gets engaged about halfway into the series, there is clearly a sizzling attraction between her and Paulo, though they both seem reluctant to act upon it. Just as all this is happening, Mackenzie has a time of his life at a five-star hotel in a resort town.

In the series finale, Paulo and Mackenzie’s lies catch up to them as Farah arrives in Clump. Piper figures out the identity of the man who saved her during her confrontation with the biker gang and walks out of her wedding. And Daisy takes control of her life.

As mentioned above, Farah is the assassin Lorenzo and Antoinette send to kill Paulo after the latter kills their son Guido. Lorenzo even realizes that it is probably not Paulo’s fault, but Guido is ultimately his son.

In Australia, when Mackenzie steals the money from Paulo, he takes his clothes as well. Mackenzie later loses the same money when his wife, Charmaine, hoodwinks him, forcing him to use Paulo’s credit card. This leads Farah to find Mackenzie, who spills everything — from the fact that his wife took the money to the whereabouts of Paulo. Farah subsequently grabs Charmaine and heads to Clump. However, Charmaine is killed due to the extreme heat after Farah forces her into the car’s boot following a failed escape attempt.

Farah survives an attempt on his life by Mackenzie and being buried alive. He eventually arrives in Clump and takes Daisy hostage. He nearly kills both Paulo and Piper, but Mackenzie manages to kill him this time after driving him against the bell tower of the church with the car, causing the giant cross that has been serving as a receptor to fall on the assassin.

However, the ending sequence reveals that Antoinette, having not heard from Farah in a while, has decided to take the matter into her own hand.

With the $1.8 million gone, Louis advises Paulo to find an alternative way to get some money to pay for the forged documents required for his permanent disappearance. In the course of the season, Paulo establishes a business relationship with Agnes, the local grower of Chop-chop or illegal tobacco, using the church to hide the product. Daisy, who comes to know about the entire operation, becomes his partner. Paulo later encounters the biker gang that Agnes sells Chop-chop to after convincing her to raise the price of her product. He helps Piper deal with the gang after she arrives to arrest them without any backup.

In the season finale, Piper figures out that it was Paulo who ensured that police raids wouldn’t find Agnes’ product. She also realizes that he was the one who saved her from the biker’s gang after orchestrating the entire thing. However, just as she confronts him, Farah arrives. The season ends on a cliffhanger involving what Piper’s next action will be.

It’s quite apparent that Piper is an exceptional police officer who does her duty regardless of whom she is pitted against. But this seems like a special occasion. After all, Paulo’s presence in the town has had a mostly positive impact on Clump, despite his secret rise as a crime lord. Moreover, Piper doesn’t know certain aspects of the story yet, including Paulo’s deal with the head of the biker gang. And Paulo is not likely to share that information with her unless he absolutely has to. So, all things considered, Piper will probably not arrest Paulo.

Who Is the Leader of the Biker Gang?

Toward the end of the season, a big revelation is made involving the mysterious leader of the biker gang. We keep seeing its members speaking to someone over the phone, and we know that these people have a leader to whom they answer.

After the arrest of the gang, Sergeant Rahane (Sachin Joab), Piper’s boss, comes to speak to Paulo, and it becomes clear rather fast that he is the man who the bikers answer to. Moreover, Rahane has found out exactly who Paulo is and instructs him to leave Clump and never come back. However, as always, Paulo manages to negotiate his way out of the situation, convincing the other man to give him a month to prove to him that he can run the business more efficiently than the bikers.

As Clump, Paulo comes to be known as Mack, short for Mackenzie. Even though Farah is dead, Paulo knows that others will come after him. If Piper doesn’t arrest him, the most sensible thing for him will be to leave Clump. But he has evidently grown fond of the town and the people there, especially Daisy and Piper. Plus, Paulo has the plans he made with Rahane. So, even though he knows that Lorenzo and Antoinette might send more people after him, he probably isn’t going anywhere.

Read More: Where is Irreverent Filmed?