Is Garsa Fwip Dead in The Book of Boba Fett? Theories

In the ever-expanding ‘Star Wars’ universe, new and fascinating characters are regularly getting introduced. With ‘The Book of Boba Fett,’ the creators explore the world of crime in the galaxy far, far away. We get glimpses of the criminal underbelly of the galaxy in the original trilogy through Jabba the Hutt and his organization. In the final episode of season 2 of ‘The Mandalorian,’ Boba takes over Jabba’s organization with the help of Fennec Shand. One of the first places Boba visits after he assumes control is a cantina called the Sanctuary, run by a Twi’lek female called Garsa Fwip (Jennifer Beals). In episode 6 of ‘The Book of Boba Fett,’ titled ‘Chapter 6: From the Desert Comes a Stranger,’ an explosion takes place at the Sanctuary with Garsa, her staff, and patrons still inside. If you are wondering whether she survives in ‘The Book of Boba Fett,’ we got you covered. SPOILERS AHEAD.

Garsa is introduced in the pilot episode of the series. She runs a successful cantina in the city of Mos Espa on the desert planet of Tatooine and knows how to deal with criminal elements of the city diplomatically. When Boba shows up at her establishment with Fennec and two Gamorrean guards, Garsa receives him graciously. Her two assistants take the helmets from Boba and Fennec for “cleaning.” When they return, Boba’s helmet is filled with coins.

Mos Espa is brimming with criminal elements. To operate a successful business there, a merchant has to be on good terms with whoever running things. Garsa is evidently well aware of this. She places the Sanctuary under Boba’s authority, not only placating Boba but also ensuring that smaller criminals will not accost her establishment. 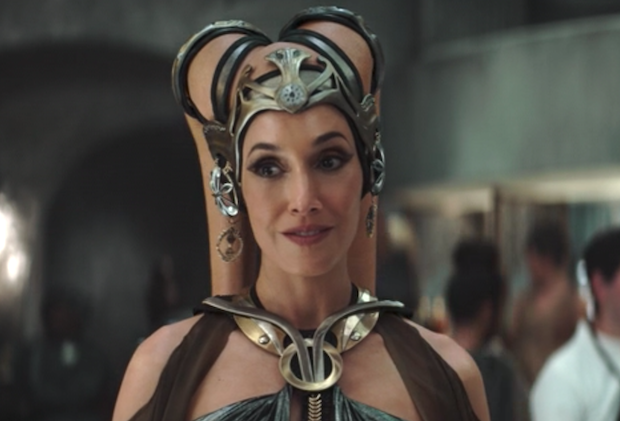 However, as the war between Boba and the Pyke Syndicate becomes inevitable, she and the Sanctuary get caught in the crossfire. When two Syndicate members visit the Cantina, she instructs her assistants to pay them the same way they did Boba. However, one thing that the Syndicate doesn’t lack is wealth. It quickly becomes apparent that they are not there to collect protection money. As they depart, they leave a canister behind. It explodes, leaving the fates of Garsa and others in the establishment uncertain.

With this attack, the Syndicate has virtually begun the war. It’s a message to Boba and those under his protection that the former bounty hunter can’t protect anyone from the Syndicate. In terms of the narrative, the message will be amplified if Garsa is dead, which, in turn, will make it harder for Boba to find allies. If she does become one of the first casualties of this war, it can potentially trigger a series of back-and-forth terrorist attacks between the warring parties.

Contrarily, Beals is a prominent TV actress, and Garsa seems to be a genuinely interesting character. The producers might not be willing to let go of either of them this early in the series. It’s possible that Garsa’s apparent death is a classic case of misdirection, and she might be revealed to be alive in the next episode.

Read More: What Is the Rancor in The Book of Boba Fett, Explained