Is Grant Cardone Married? Does He Have Kids? 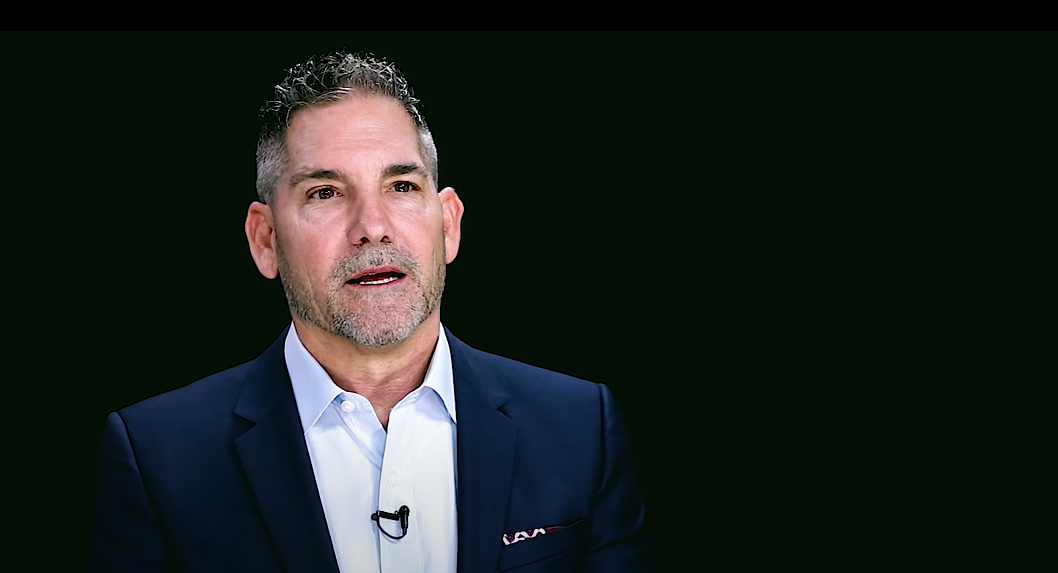 Grant Cardone is a mega-rich real estate mogul, self-made businessman, TV personality, bestselling author, and sales trainer. Leaving behind a life of drug addiction, Grant worked hard, almost obsessively, towards his goals and became a millionaire by the age of 30. Now, at age 62 and more than 35 years into his career, Grant is the high-flying CEO of seven privately-held companies, including (but not limited to) Cardone Enterprises, Cardone Acquisitions, Cardone Training Technologies, The Cardone Group, and Cardone Capital.

Grant regularly appears on channels like Fox News, MSNBC, and CNBC. Grant is not shy about sharing the secrets of his success and often hosts talks and seminars about doing well in business. He has also shared his methodology through several books that he has authored such as, ‘Sell to Survive,’ ‘The Closer’s Survival Guide,’ ‘The 10X Rule’, and ‘If You’re Not First, You’re Last.’

The successful entrepreneur was born in Lake Charles, Louisiana, on March 21, 1958, to Curtis Louis Cardone and Concetta Neil Cardone. He has a twin brother named Gary, and they grew up with three other siblings. Grant is an active member of the Church of Scientology. If you’re curious to know more about the business magnate’s family – who his wife is and if they have children – then you’ve come to the right place. Here’s everything that you need to know.

Grant Cardone is married to a Spanish-born actress and former model Elena Lyons. Elena was born in Madrid, Spain, on June 27, 1973, as Elena Rosaia. Like her husband Grant, Elena had a traumatic childhood experience and a troubled young-adulthood in which drugs and alcohol abuse featured heavily. At the tender age of 13, Elena witnessed her best friend, who lived in the house opposite her own, getting burned in a tragic fire. Despite the neighborhood’s best efforts to quell the flames and save Elena’s friend and her mother, they both died, leaving Elena in unresolved, unchecked grief. 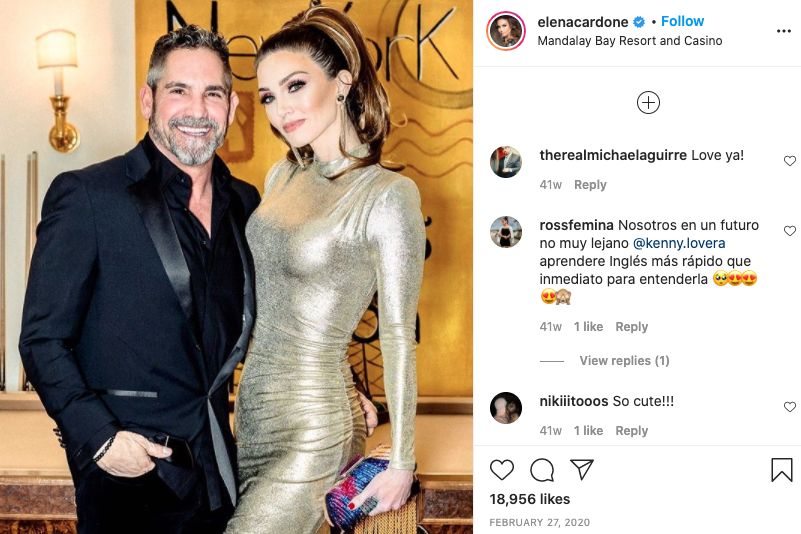 The grief she buried inside bubbled up later in her early twenties and catapulted her into the darkly seductive and degenerative lifestyle of drugs and alcohol addiction. Luckily, Elena was strong enough to fight her addiction and emerge victorious. Originally a New Orleans native, Elena moved to Los Angeles to pursue a career in modeling and acting. She has acted in ‘Saved by the Bell: The College Years’, ‘USA High’, ‘CSI’, ‘Two and a Half Men’, ‘Days of Our Lives’, and ‘The Young and the Restless’ (among others). 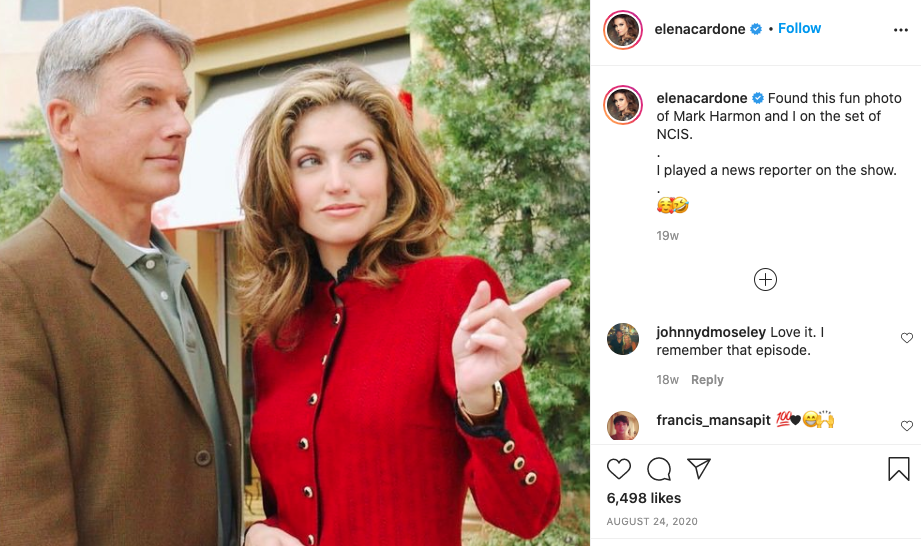 Elena is also a skilled competitive sport shooter, author, businesswoman, event producer, and public speaker. Her non-fiction book, ‘Build an Empire: How To Have It All’, is a bestseller. She trains and mentors both men and women on how to have and maintain an excellent career and marriage. Elena also hosts her own podcast – ‘Women in Power’. She is often the influence behind many of Grant Cardone Enterprises’ business ventures.

When she first met Grant Cardone in 2003, Elena wasn’t too sure about dating him, even though he already knew she was “the one”. Elena has jokingly said, in one of her talks, that she wasn’t about to go out with a “short, annoying man”. But they did go out and ended up getting married only a year later, on July 4, 2004. More than 16 years later, the ambitious and driven couple is still going strong. The husband and wife duo co-host ‘The G&E Show’ together and live in Miami Beach.

Yes, Grant and Elena share two kids, both beautiful girls named Sabrina and Scarlett. Their oldest, Sabrina, is 11 years old, while the younger one, Scarlett, is aged 9. Despite running an empire, Grant and Elena are very hands-on parents and make sure to spend quality time with their children every day. The family of four also has two cats appropriately named Cash and Flow. 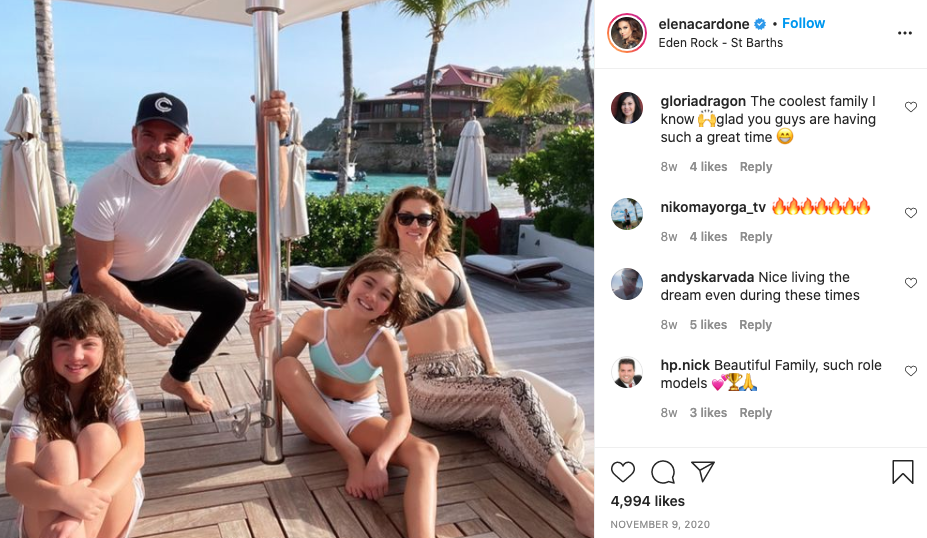 Read More: Is Kevin O’Leary Married? Does He Have Children?