Is House of Secrets: The Burari Deaths a True Story?

Netflix’s latest offering, ‘House of Secrets: The Burari Deaths,’ is created by Leena Yadav and offers an insight into what happened in the Bhatia home in Burari, India, in 2018. The show deals with an investigation into a disturbing case, exploring the aspects of mental health and the sensationalist nature of media coverage. The details of this incident gripped the whole nation while the authorities tried to get to the bottom of how eleven people of the same family were found dead. So, let’s find out more about this case then, shall we?

Is House of Secrets: The Burari Deaths a True Story?

Yes, ‘House of Secrets: The Burari Deaths’ is based on a true story. The three-part docuseries explores the infamous deaths in Burari. In July 2018, the police were alerted to a crime that stunned the residents of Delhi, India, where Burari is located. The Bhatia family was well-respected in the community, and on that morning, they were found dead in what eventually turned out to be a ritualistic death. Eleven members that included three generations were found in the house. They were blindfolded and gagged with cotton in their ears. Some of them had their limbs bound as well. 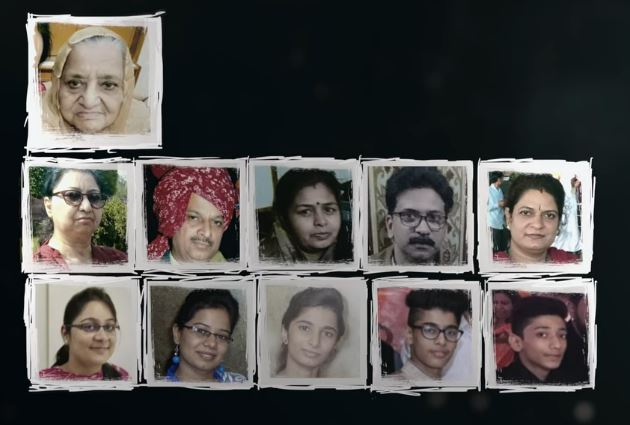 Narayani Devi, the matriarch of the Bhatia family, was found in the bedroom, and it appeared that she had been strangled to death. Also found were two of her sons and a daughter: Bhavnesh, Lalit, and Pratibha. But the tragedy didn’t end there. Bhavnesh’s wife, Savita, and their children Neetu, Menaka, and Dhruv were dead along with Lalit’s wife Tina, their son Shivam, and Pratibha’s daughter, Priyanka. The ten of them were found hanging from an iron grill with stools around them. Almost all of their limbs were bound. Their ages ranged from 15 to 77 years.

There were no signs of forced entry, but the authorities couldn’t find a suicide note at the scene either. Initial investigation revealed that the family owned a couple of businesses close by and were beloved within the community. While religious, people who knew the Bhatia family didn’t notice anything out of the ordinary with them during the time leading up to the incident. But a closer look at their past revealed some unsettling secrets the family held. After Bhopal Singh, Narayani’s husband, passed away sometime in 2007, Lalit, the youngest son, was deeply affected.

Lalit had become quite introverted and turned to spirituality. He offered prayers to trees and eventually told his family that his father’s soul was visiting him. According to Lalit, Bhopal gave him instructions on how to lead a better life. Bhopal had also told him to worship a banyan tree so that the family would do well. Once the religious family began to do well financially, they did believe what Lalit told them was true. The authorities also found 11 diaries that gave them more information regarding the family. The diaries had rules mentioned, and the family members had to follow them. It had minute details, even including their mundane activities.

Furthermore, security footage showed that no outsider was involved in the death. In the days leading up to the incident, some family members were seen carrying stools and wires into the house. They were later used in the deaths. The writings in the diaries also mentioned a ritual and led the authorities to believe that the family didn’t think they were going to die. It was a “thanksgiving ceremony” that lasted seven days, ending in the hanging. However, the family believed they were going to be saved.

The family also hoped to carry out the ritual yet again for another family member dealing with a few problems. The notes also mentioned them practicing blindfolding themselves, binding their limbs, and tying a noose around their necks. In the end, the police believed that this was possibly a case of shared psychosis, with Lalit’s beliefs being passed on to the family, eventually leading to the deaths.

Read More: Where Are the Surviving Members of the Bhatia Family Now?