Is Joe Exotic Sitll Married? Where is His Husband Now? 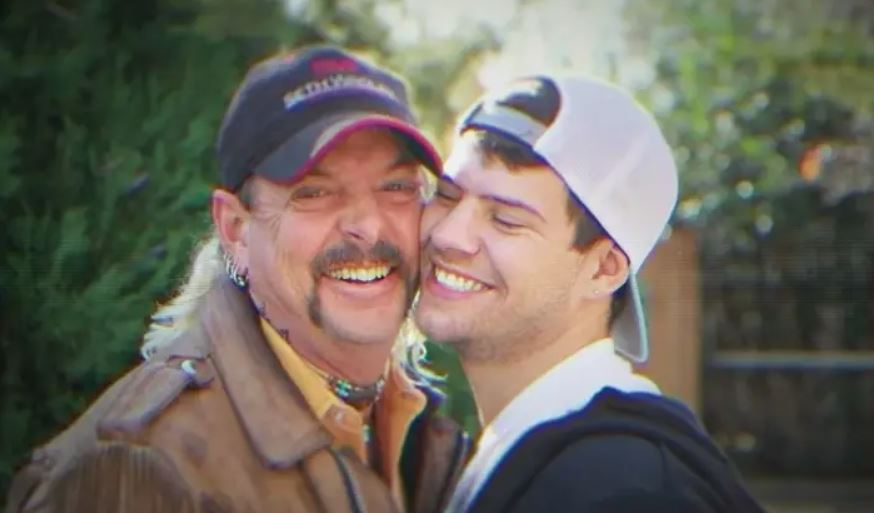 The intriguing and controversial life of Joe Exotic, also known as the “Tiger King,” has been examined in many shows over the last few years, including Netflix’s record-breaking ‘Tiger King: Murder, Mayhem, and Madness’ and ID’s ‘Joe Exotic: Tigers, Lies, and Cover-up.’ As a recognized public figure, businessman, zookeeper, and convicted offender, Joe (born Joseph Allen Schreibvogel) made a name for himself in a fashion few others ever could. Yet, the most captivating aspect has always been his relationships, so let’s find out more about his husband Dillon Passage, shall we?

Joe Exotic’s first spouse, 23-year-old Travis Maldonado, accidentally shot himself on the grounds of GW Zoo on October 6, 2017, to the sheer horror of his legal husband of two years. However, only a couple of months later, on December 11, Joe tied the knot with a then-22-year-old Dillon Passage in a ceremony where Travis’ mother served as a witness. This new couple had first met at Joe’s Safari Bar, roughly two miles away from the zoo, and had returned together, never to part again — at least at that time. Their energies matched, so they decided to stick by one another.

According to Variety, Dillon struggled with a prescription pill addiction, but Joe helped him get better through his support and experience. “Joe made me feel like there was reason to be alive,” he announced. Therefore, when the zookeeper was arrested and condemned to federal prison, Dillon tried his best to stay by him. He openly supported his husband for a while, but cracks slowly started to appear, and on March 26, 2021, Dillon announced that he and Joe were seeking a divorce through his Instagram profile.

“In November of 2017 I met Joe who was there for me during a difficult time in my life,” he penned. “After just 9 short months he was arrested and, for the last two and a half years, we have been apart. I’ve always stood by his side and will continue to always love and support him.” Then, Dillon admitted to the divorce and added, “We are on good terms still and I hope it can stay that way. I will continue to have Joe in my life and do my best to support him while he undergoes further legal battles to better his situation.”

Since Dillon Passage’s announcement, there has been a little back and forth between him and his now estranged husband (their divorce has not been finalized as of writing). The most prominent one has been the latter blocking him on social media platforms after he took to Instagram Live to share his “truth.” Dillon alleged, in the video below, that Joe was pretty controlling and partook in “manipulation” and “emotional abuse” to ensure that he had limited social interactions or friends. His spouse, he implied, liked the dependency.

Dillon said, as seen above, “I started to realise I was another animal in a cage that Joe wanted to control, that he could come to when he wanted to play,” before adding that Joe would harass him from jail if he ever missed one of their scheduled phone calls. “If I didn’t answer…Joe would lash out at me and threaten to take things away from me, threaten to get me in trouble for things, and he would call me a million times…Eventually, I grew tired of it. I wanted to leave, so I did.”

Despite all that, Dillon still says that he’ll support Joe through everything. From what we can tell, the Florida resident and animal lover appears to be extremely happy today and has a boyfriend much closer to him in age, John. While introducing him to us, Dillon wrote, “I’ve planned on keeping my relationship private for personal reasons but lately I’ve been having a hard time…and John has been my rock and helping me get through it all.” Even Joe has a new partner, Seth Posey.

Read More: When Will Joe Exotic Be Released From Prison?