Is London Hughes Dating Anyone? Who is Her Boyfriend?

London Hughes is a famous British comedian and TV presenter. Before rising to fame as a bawdy comic, she exhibited her talent through hilarious sketches, sometimes writing as many as 25 a week. Starting her television career from being a daytime host on adult TV station Babestation, she went on to win the 2009 Funny Women Award at Comedy Store, a popular club in West Hollywood. In 2010, the comedienne wrote and starred in a BBC comedy entitled, ‘Laughter Shock.’

London’s ribaldry sense of humor has made her a household name, and her vivacious 2019 stand-up show ‘To Catch a D*ck’ got her nominated as the first British Black woman for the Dave Edinburgh Comedy Best Show. Often basing her comedy sketches and stand-ups on her experiences, London has hardly ever shied away from talking about her dating life in front of an audience. After the same boldness fetched her a Netflix comedy special ‘London Hughes: To Catch a D*ck,’ we got intrigued to dive into this aspect of her life!

Born in 1989, London Hughes’ family actually named her Dionne, but the artist later changed it to her childhood nickname. Her mother is of Jamaican and Cuban descent, while her father is of Puerto Rican, Spanish and Nigerian ancestry. She loves and adores her mother and never misses a chance to express it on her social media accounts!

In other news, it’s my mum’s SIXTY SIXTH birthday today! I’ve included this picture of us at her wedding a month ago. What a gorgeous, generous, youthful looking queen! And my mum’s pretty great too 🎉 pic.twitter.com/E48Ya0Wc4Z

London is extremely proud of her father’s adoptive mother, Doreen, and paid a glowing tribute to her on her 93rd birthday. The comic revealed how her grandmother and grandfather, Bill, were the “first white people” in Sussex to adopt a black baby. London’s great grandfather was Enos Knibbs, a West Indian cricket umpire from Jamaica. She has also confessed that Doreen’s mother was such a “massive racist” that she was disowned after she decided to tend to London’s dad due to his ethnicity.

This is the woman who in 1995 had a go at the staff at Gamley’s toyshop in Crawley because they didn’t sell any black baby dolls or black Barbies for her black granddaughter to play with.

She is a hero ❤️ pic.twitter.com/OQSykc0uEk

However, Doreen did not care for it. Coming from such a culturally rich ancestry, London wished to make it big professionally and started on children’s TV. With the rise in her success graph, London was offered a lifetime opportunity to find true love on E4’s ‘Celebs Go Dating’ in 2018. Was she successful in this millennial attempt, or is she still single? 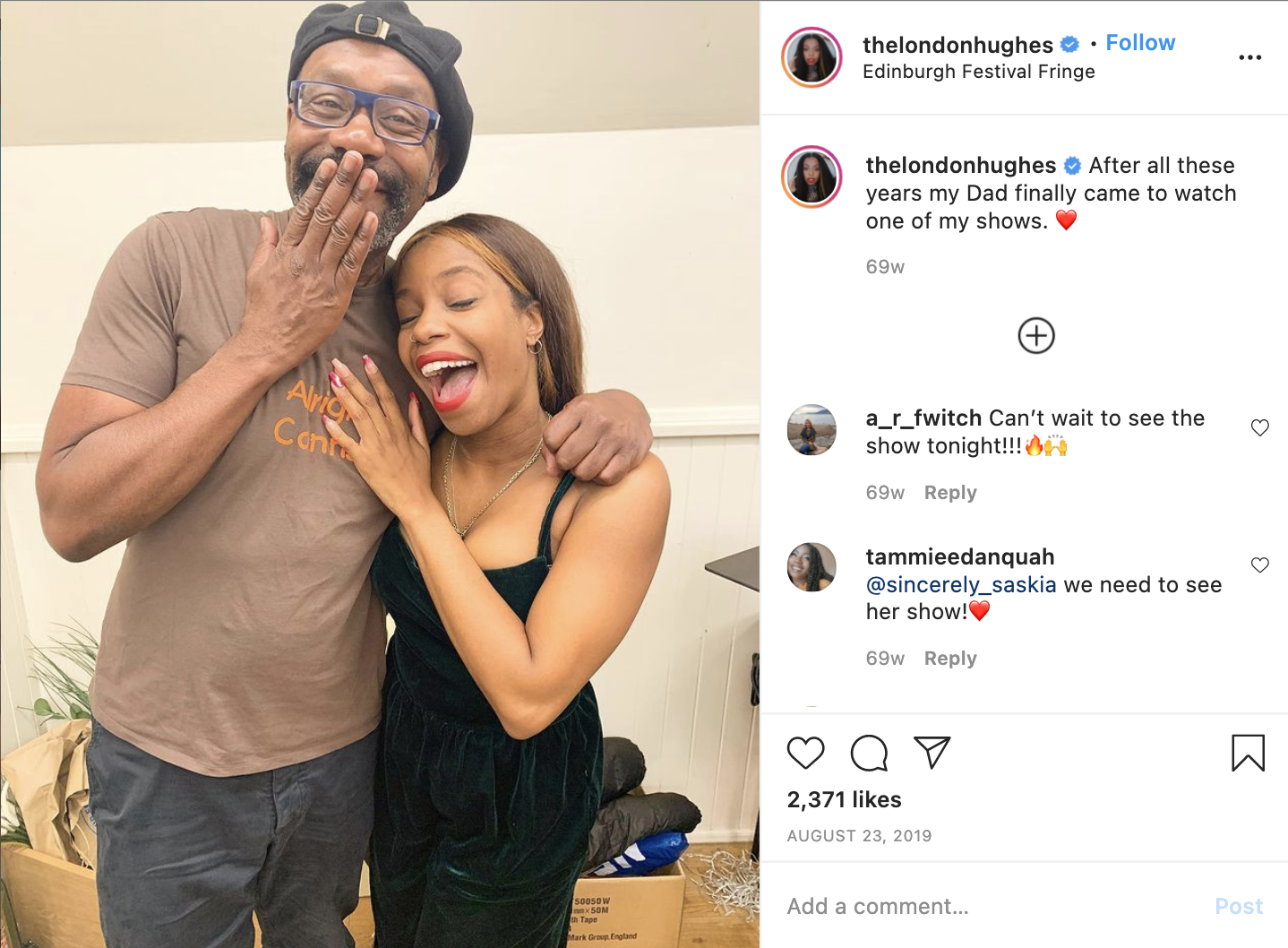 London Hughes has admitted to being a single woman during a fun chat with Below The Joke in March 2019 and from the looks of it, her relationship status has not altered as yet. Thus, she clearly failed to find the one on ‘Celebs Go Dating’ and often slyly hints at her “single” relationship status through comical captions on her social media accounts posts. London has disclosed to her followers that she previously dated a fellow comedian, Tommy Holgate. They met almost a decade back at the Edinburgh Fringe Festival and instantly fell for each other. 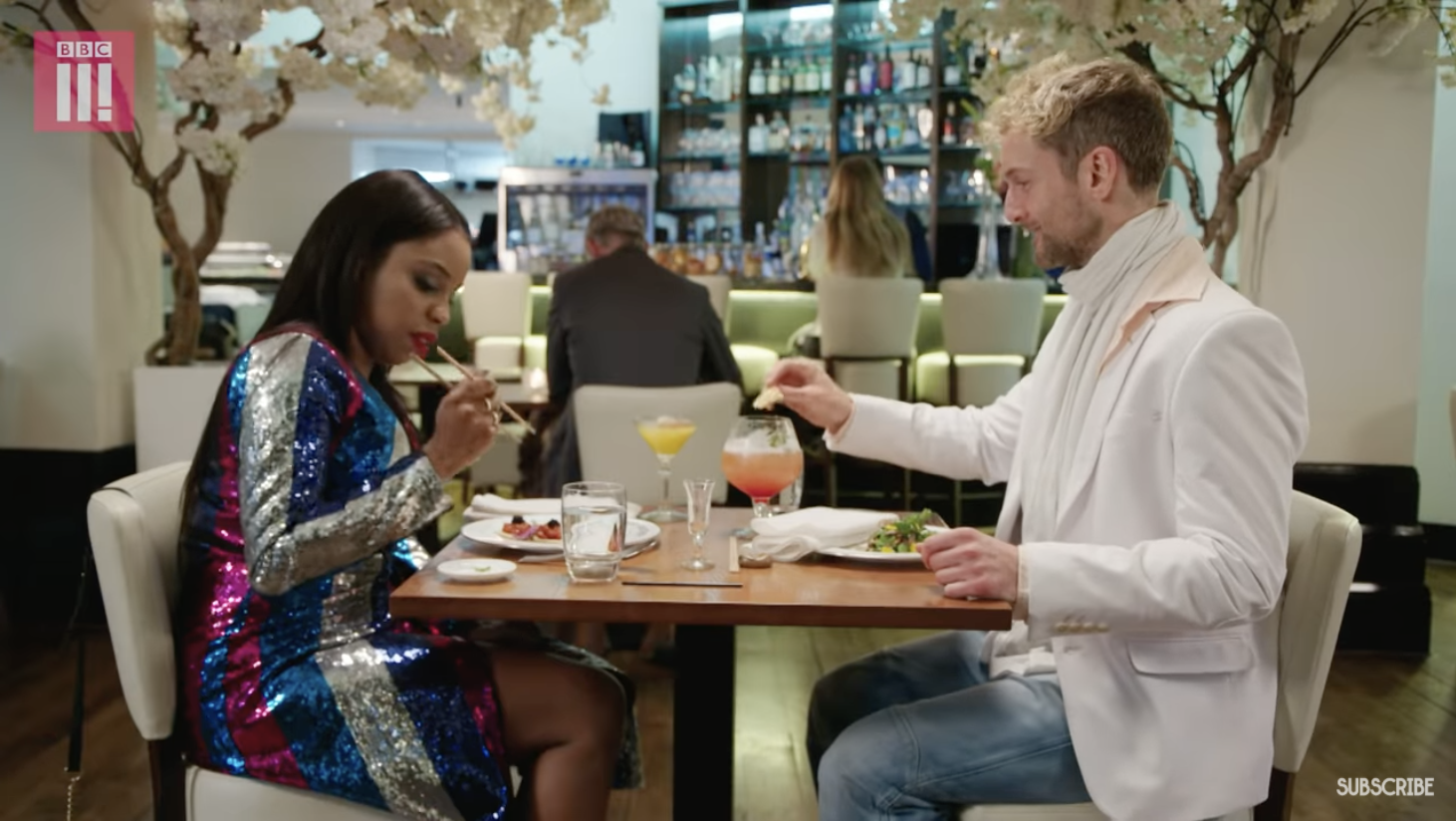 She got pulled towards his unconventional hairstyle, a “massive blonde afro.” But his blond and curly hair could only keep the relationship going for nine months, after which they mutually decided to part ways. The former couple had appeared on ‘Celebrity Eating With My Ex.’ During the filming, they realized yet again that Tommy’s insecurity from London’s talent and quick rise in the comedy industry was apparently the reason for the end of their relationship.

My boyfriend's back from America! So..Today I mainly took selfies that made us look like a cool interracial couple 😎 pic.twitter.com/W4WdrgGtZp

Though he was reportedly her first boyfriend with whom she had been physically intimate, it was not enough to save the relationship. She is known to have dated another man around 2015 (pictured above), but it is believed that this too ended within a year though London has never come out in the open to talk about it.