Is Vir Das Married? Does He Have Children?

Indian actor, musician, and comedian Vir Das started his career in standup comedy when he was a student at Knox College in Galesburg, Illinois. His first standup special, called ‘Brown Men Can’t Hump’ debuted at the Knox’s Harbach Theatre. Since then, he has written, directed, and starred in several standup specials. He has also been a TV show host on an Indian Channel, Zoom, and Top Drive – Getaway for Star World. As part of his music journey, Vir Das’ comedy rock band, Alien Chutney, released their first album in 2012.

He was also the first Indian comic to have his own standup special (‘Abroad Understanding’) on Netflix. His film debut was in the Bollywood movie ‘Namastey London,’ and since then, he has appeared in popular films like ‘Love Aaj Kal,’ ‘Delhi Belly,’ and ‘Go Goa Gone.’ In 2017, Vir Das was named one of “Variety’s 10 Comics to Watch for.” Das can easily be credited for starting a culture of standup comedy in the English language in India. With a global fan-following, Das has left a prominent mark in the genre of comedy. Let’s find out more about the personal and professional life of the comedian!

The 41-year-old actor was born in Dehradun in Uttarakhand, India. Raised in Nigeria, where he went to the Indian Language School in Lagos, his family moved to India reportedly after the assassination of Nigerian general Murtala Mohammed. At the age of nine, Das was sent to a boarding school. His parents placed grave importance on Indian values, which they wished for Das to inculcate during his boarding school years.

Besides Vir Das, his family has also been a part of the media industry. His mother, Madhur Das, who was a teacher in Dehradun, took up a mass communication course after the Dases moved to Africa. Upon returning to India, she dabbled in filmmaking and produced documentary films along with her daughter, Vir Das’ elder sister Trisha, who worked as a director on the films. Together they produced the critically acclaimed film ‘Fiddlers on the Thatch’ based on the children of Kalimpong.

The quiet and reserved Madhur Das left this profession after her daughter’s marriage and started working with WWF-India as their director. Vir Das was heavily influenced by his father, who got him into the habit of reading newspapers, a habit that Vir Das claims to possess to this day. He also has a bulldog named Doctor Watson, who he often posts on his Instagram account. 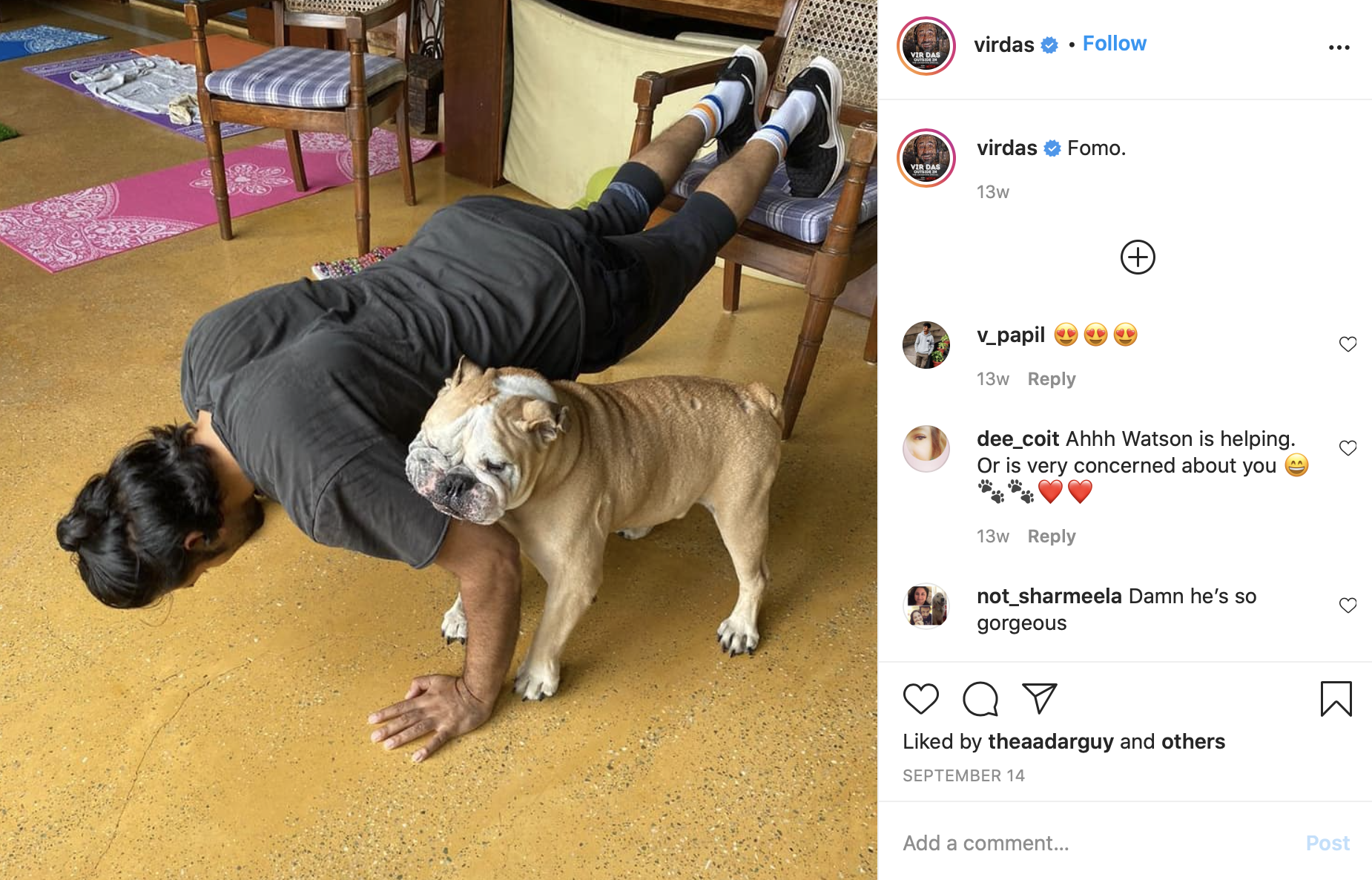 It might be heartbreaking for some fans to learn that Vir Das is, in fact, a married man. In October 2014, he married his girlfriend of five years, Shivani Mathur. Their love story began when Das first met Shivani at his housewarming party, which she had gatecrashed. Shivani, an event manager, was introduced to Das through mutual friends. She has been handling Das’ shows since the two first got together.

Completely in awe of her, Das said in an interview, “She is very honest and grounded and apart from the public life that people perceive me to be, she knows the real me. I don’t have to crack jokes with her, she understands my sense of humor and she makes me laugh more.” On one occasion, Das has also stated that he regrets the thirteen relationships he had before he met her.

Their October wedding took place on a private beach in Sri Lanka with only close few close friends and family. Both Shivani and Vir have busy schedules, which is why they held a quiet ceremony where the use of cellphones was strictly prohibited. The couple does not have any kids. The comic did, in fact, quite contradictorily, tweeted this on his account in 2019.

I'm going to tell my kids….not to have kids.

Read More: Beth Stelling From Girl Daddy: Everything We Know