Jerry Sandusky: Where is the Serial Rapist Now? 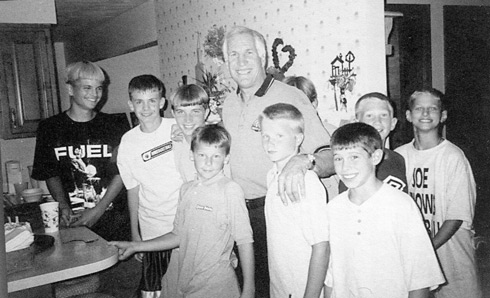 Image Credit: The Most Hated Man in America

Investigation Discovery’s ‘Murder Under the Friday Night Lights: When Rules Don’t Apply’ chronicles the Penn State child sex abuse scandal where a former assistant coach, Jerry Sandusky was convicted of raping multiple minor boys. He ran a children’s charity organization and used it as means to get in touch with vulnerable boys, grooming them and sexually abusing them. If you’re interested in finding where Jerry is now, here’s what we know so far.

Who is Jerry Sandusky?

Gerald “Jerry” Arthur Sandusky was born on January 26, 1944, in Washington, Pennsylvania, to Arthur Sandusky and Evelyn Mae. His father, Arthur, was a celebrated name in the sporting history of Washington, managing to win the Pony League World Series championship and serving as a director of Brownson House. Due to his unparalleled contribution to Washington’s sporting history, Arthur was inducted into the Pennsylvania Sports Hall of Fame in 1989. 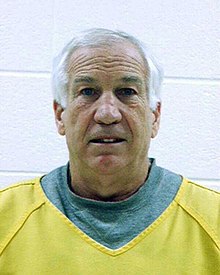 Jerry went to Washington High School, and his friends described him as “a very good student with a good sense of humor.” He was a notable athlete, playing basketball, football, baseball, and javelin. One of his childhood friends and teammate, John Liptak, said, “When he (Jerry) stepped on the football field, he was all business. He would drive himself, I could see how he turned out to be a great coach. He had all the tools.” Another teammate, Bob Riggle, recounted, “He worked hard at being an athlete. He was very methodical and by the numbers.” However, he was a “loner” despite being a handsome and famous athlete.

According to his autobiography, Jerry had a personal code known as “Jer’s law,” which he allegedly abided by in his childhood. It consisted of basic moral rules, including committing mischievous acts but safeguarding everyone’s safety, never disrespecting teachers, and always speaking the truth if caught breaking the rules. In many ways, he identified with the titular character of ‘Forrest Gump’ (1994), with news reports stating how he confided his love for Forrest to one of his sexual harassment victims by sending them letters. He also signed at least one of the letters, later released in the public domain, as “Forrest Jer.”

Jerry played for the Penn State team Rip Engle as a defensive end from 1963 to 1965. He married Dorothy “Dottie” in 1966 while working as a graduate assistant under Joe Paterno at Penn State. He also earned B.S. degrees in health and physical education in 1966 and 1970, respectively. After brief coaching stints at different college teams, he returned to Penn State in 1969 and remained an assistant coach until his retirement at the end of the 1999 season.

After his retirement, Jerry focused on the children’s charity, The Second Mile, which he found in State College, Pennsylvania, in 1977. His work with foster care children earned him numerous recognitions, including a letter from President George H. W. Bush in 1990 and an Angels in Adoption award in 2002 by the then U.S. Senator Rick Santorum. However, Pennsylvania’s ‘beloved’ coach’s murky crimes soon became public and garnered national attention after a Central Mountain High School student made sexual abuse allegations against Jerry.

In 2008, the Pennsylvania Attorney General’s Office launched a probe, and it soon became apparent after the investigation discovered Jerry had been strategically sexually abusing vulnerable boys from 1994 through 2009. According to court documents, Jerry approached vulnerable boys and employed child grooming tactics leading to incremental touching – a classic move of pedophiles. He was indicted on 40 counts of sex crimes against minors on November 4, 2011, by a grand jury.

Court documents state how erstwhile Penn State graduate assistant, Mike McQueary, walked in on Jerry allegedly sexually abusing a minor boy in the locker room showers at the Lasch Building in 2002. On November 5, 2011, he was arrested and charged with seven counts of involuntary deviant sexual intercourse, eight counts of corruption of minors, eight counts of endangering the welfare of a child, seven counts of indecent assault, and other offenses. Penn State banned him from the campus the following day.

Where is Jerry Sandusky?

Jerry was charged with an additional 12 counts of sexual crimes against children and arrested for the second time on December 7, 2011. After posting the $250,000 bail, he was released and placed on monitored house arrest as he waited for his trial. His trial commenced at the Centre County Courthouse on June 11, 2012, with the prosecution bringing forth eight witnesses sexually abused by Jerry when they were minors. All the victims claimed they met him through his charity home and were sexually abused in his basement or locker room shower. 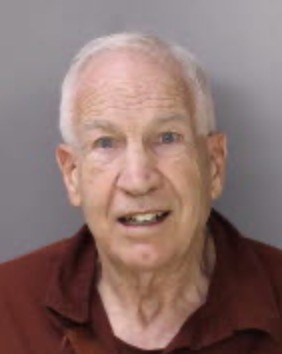 As the jury began deliberating, one of Jerry’s six adopted children, Matt Sandusky, also alleged being a sexual abuse victim of his father on June 21, 2012. The jury convicted Jerry on eight counts of involuntary deviate sexual intercourse, seven counts of indecent assault, one count of criminal intent to commit indecent assault, nine counts of unlawful contact with minors, ten counts of corruption of minors, and ten counts of endangering the welfare of children the following day.

On October 8, Jerry issued an audio statement from jail, proclaiming his innocence. He was sentenced to 60 years in prison and would be required to serve a minimum of 30 years before being eligible for parole. For Jerry, in his late 60s, it was essentially a life sentence as he would not be qualified for a parole before October 2042. The court also declared him a sexually violent predator in Pennsylvania, meaning he would be required to report his address to the police every three months and participate in a court-approved counseling program for the rest of his life.

Jerry was sent to Camp Hill state prison in Cumberland County for pre-imprisonment evaluation before being transferred to Greene state prison in Franklin Township on October 31, 2012. He was moved to SCI Somerset in March 2017 and incarcerated at SCI Laurel Highlands near Pittsburgh two months later. Since May 2017, Jerry, 78, has been serving his sentence at the minimum security facility there for ailing and senior inmates.

According to news reports, Jerry’s defense counsel has been attempting to secure a new trial to have a well-known psychologist and repressed memory specialist, Dr. Elizabeth Loftus, testify in his defense. They believe most victim testimonies against Jerry have been allegedly based on repressed memories. However, Jerry’s quest for a new trial continues with the court dismissing all his appeals till now.