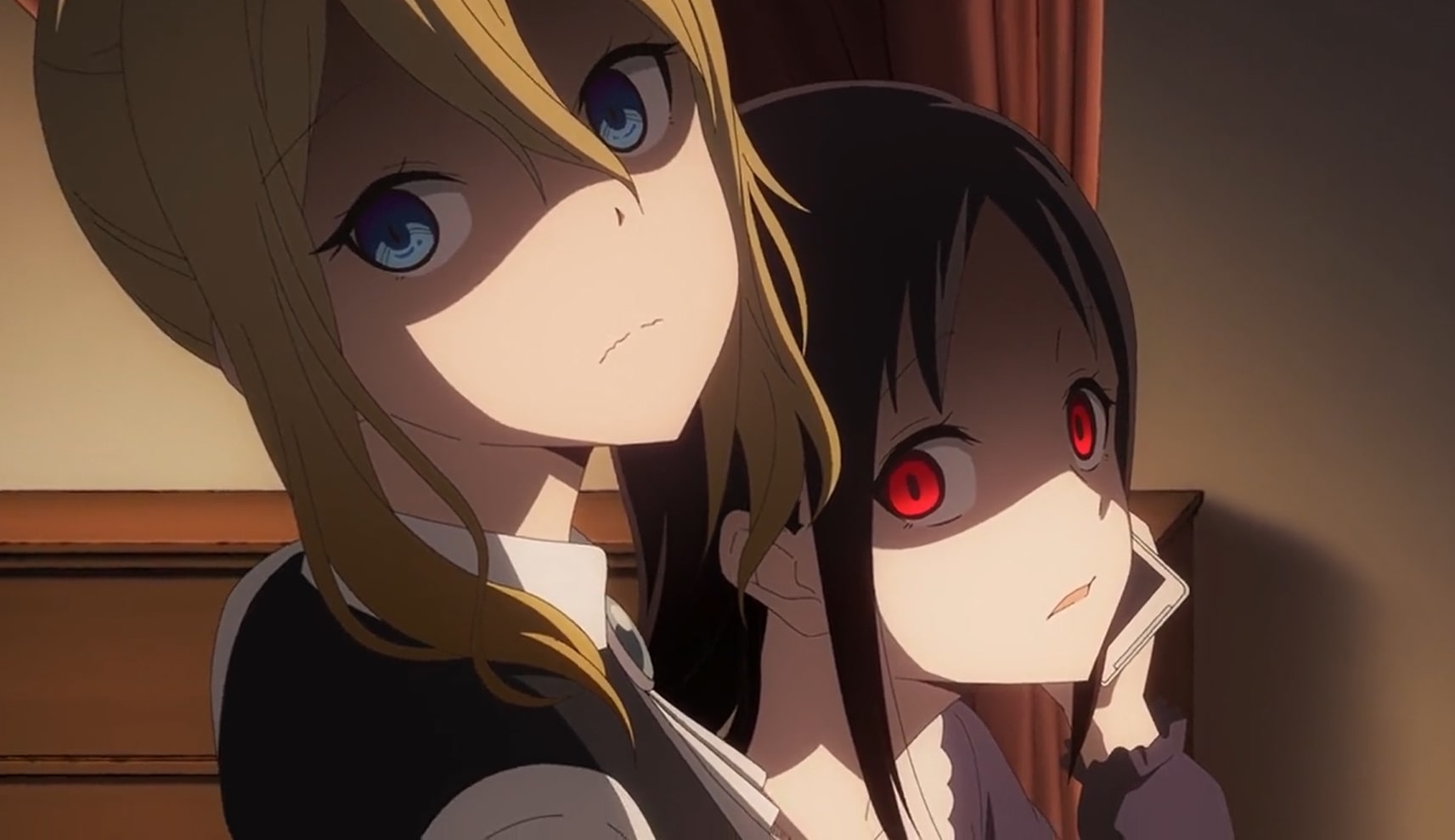 In the highly anticipated first episode of ‘Kaguya-sama: Love Is War’ season 3, Ishigami and Iino have a tussle while the rest of their friends are busy in assembly. Kaguya finally gets her own smartphone and starts using the Line freeware app to text others. However, she is utterly clueless about the read receipt feature, which almost leads to some embarrassing outcomes. Here is everything you need to know about the ending of ‘Kaguya-sama: Love Is War’ season 3, episode 1. SPOILERS AHEAD!

With the rest of his friends busy in the assembly, Ishigami studies all by himself when Iino suddenly arrives in the hall. She is visibly annoyed by his presence and does not hesitate to let him know of the same. Ishigami is understandably upset by her needless comments and immediately claps back. However, their verbal exchange is short as Iino puts on her headphones and begins to study. Soon the entire hall is reverberated by healing sounds, and Ishigami realizes that Iino has not inserted the headphone jack correctly into her smartphone.

Initially, Ishigami thinks of letting her know, but since he himself is enjoying the calming music, he changes his mind. However, this turns out to be a bad decision as he gets to hear embarrassing songs and motivational speeches that Iino would never want anyone to hear. So, when their friends return after the assembly, Ishigami tries to distract them with small talk. However, when that does not work, he knowingly puts on a headphone without plugging in the audio jack and plays an embarrassing song with the hope that Iino would check hers’ as well. Sadly, that does not work either, as she ends up pressing play without checking the headphone.

Sometime later, Kaguya joins Line after getting her own smartphone. Shirogane texts her, but instead of replying immediately, she just checks the message and pretends to be busy. She is obviously not aware of the read receipt feature, and when Hayasaka learns what Kaguya has been up to all this time, she is also afraid to tell her the truth. Meanwhile, Shirogane texts her again, and Kaguya again chooses not to respond. That’s when she tells Hayasaka that she has been doing it for two hours, which naturally makes the latter worry even more.

By this time, Shirogane realizes that Kaguya most likely does not know about the read receipt feature and calls her to tell her that. If his theory turns out to be true, it will be proof that she was staring at her phone waiting for his messages all this time, which in turn confirms that she is into him. However, just when he completes his explanation, Hayasaka explains that Kaguya’s messages are screened by the household staff. So technically, she never saw his texts personally. Shiogane is shocked by the explanation and cannot come up with any convincing argument that she is lying. 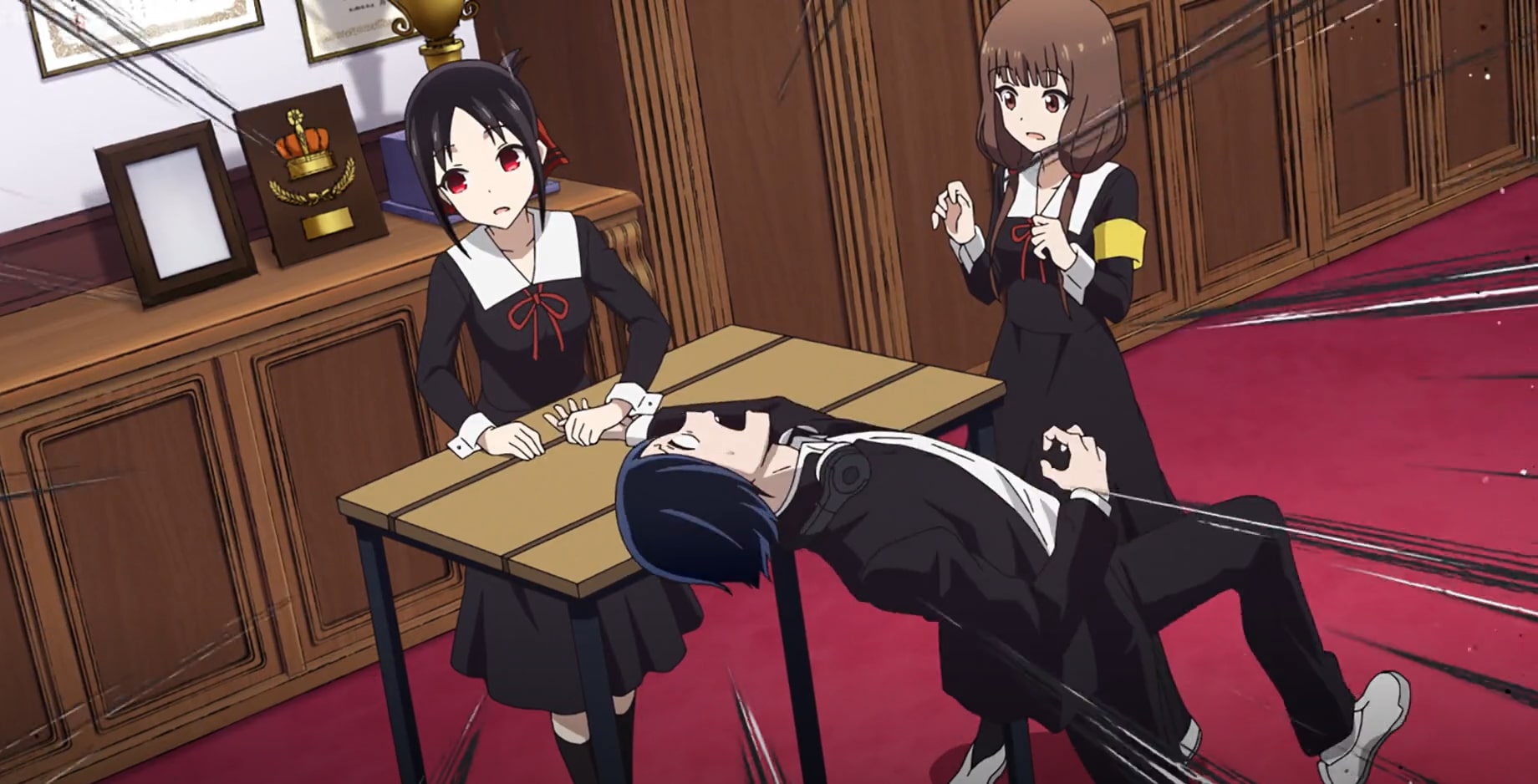 Hence, his suspicion of Kaguya being into him turn out to be untrue from his perspective, although he is painfully close to the truth. The following day, Fujiwara and Ishigami have an argument after the former struggles to carry heavy boxes to the hall. The former calls him weak, and Ishigami makes a sexist reply that he is at least stronger than the girls. His comments infuriate Fujiwara, who claims that she works really hard on her fitness and can easily defeat him in an arm wrestle. When the altercation spirals out of control, everyone decides to organize an arm-wrestling tournament to find out who is the strongest among them all.

Kaguya, Shirogane, Fujiwara, and Ishigami are declared the four participants in the student council arm wrestling tournament. The first match is held between Ishigami and Kaguya. The former assumes that it will be an easy match and puts all of his strength to end it as soon as possible. However, he is shocked to realize that he cannot even succeed in turning Kaguya’s hand at all. Just moments later, Ishigami feels an incredible force on his hand, and before he can fully comprehend what is happening, he realizes that he has lost the match. 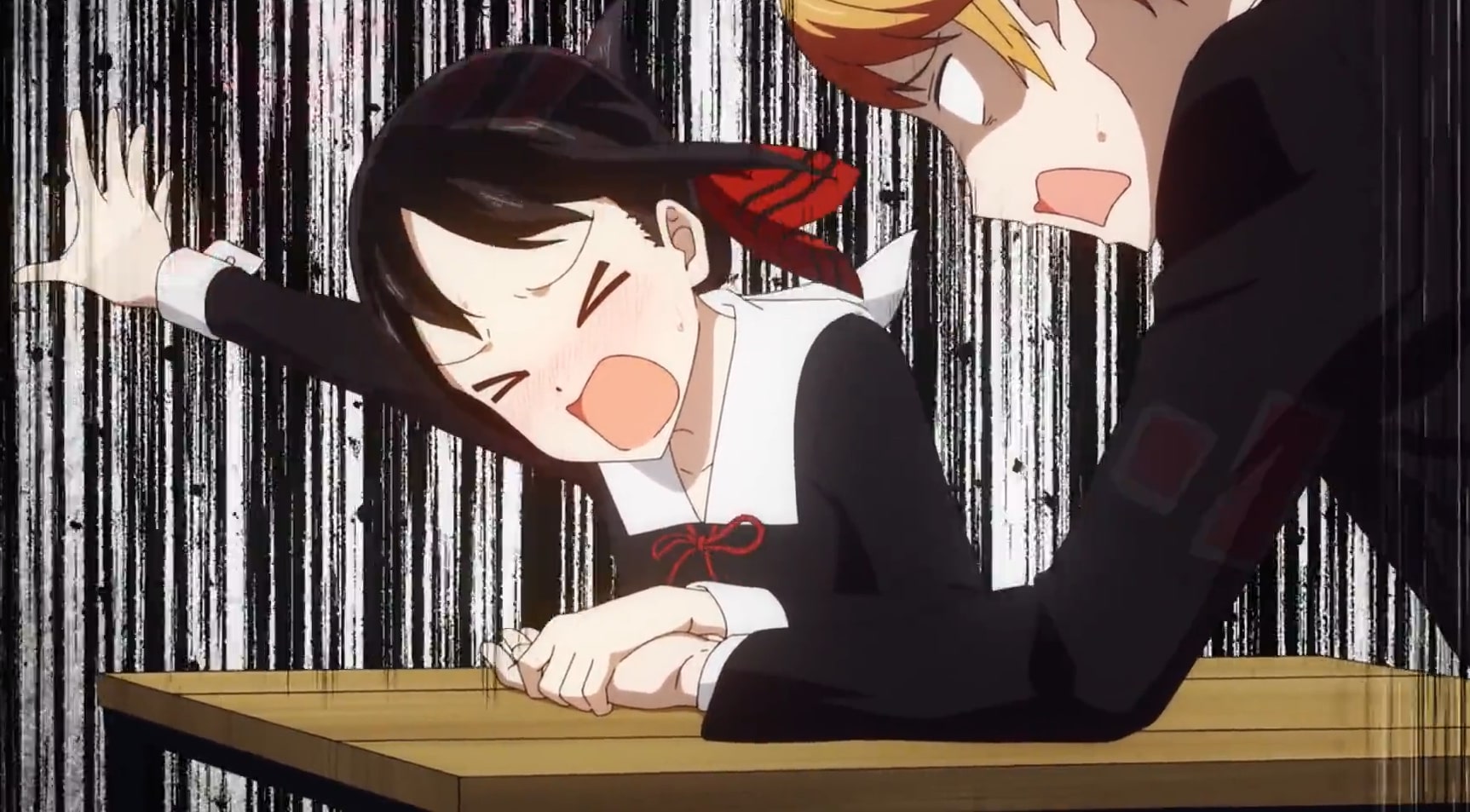 In the second game, Fujiwara also puts a valiant fight, something no one has predicted. However, the student council members soon notice that she has been keeping her hands in a specific position that gives her an advantage over Shirogane. When the hands are readjusted, she loses in an instant. Shiogane and Kaguya reach the finals, and both of them are excited that they will get to hold each other’s hands.

When the match begins, both just use enough force that keeps their hands in the balance so that they can hold onto each other’s hands as long as possible. After a long time, their hands get sweaty. That’s when Kaguya, who was about to voluntarily lose, uses a little too much force and ends up winning the student council arm wrestling tournament.