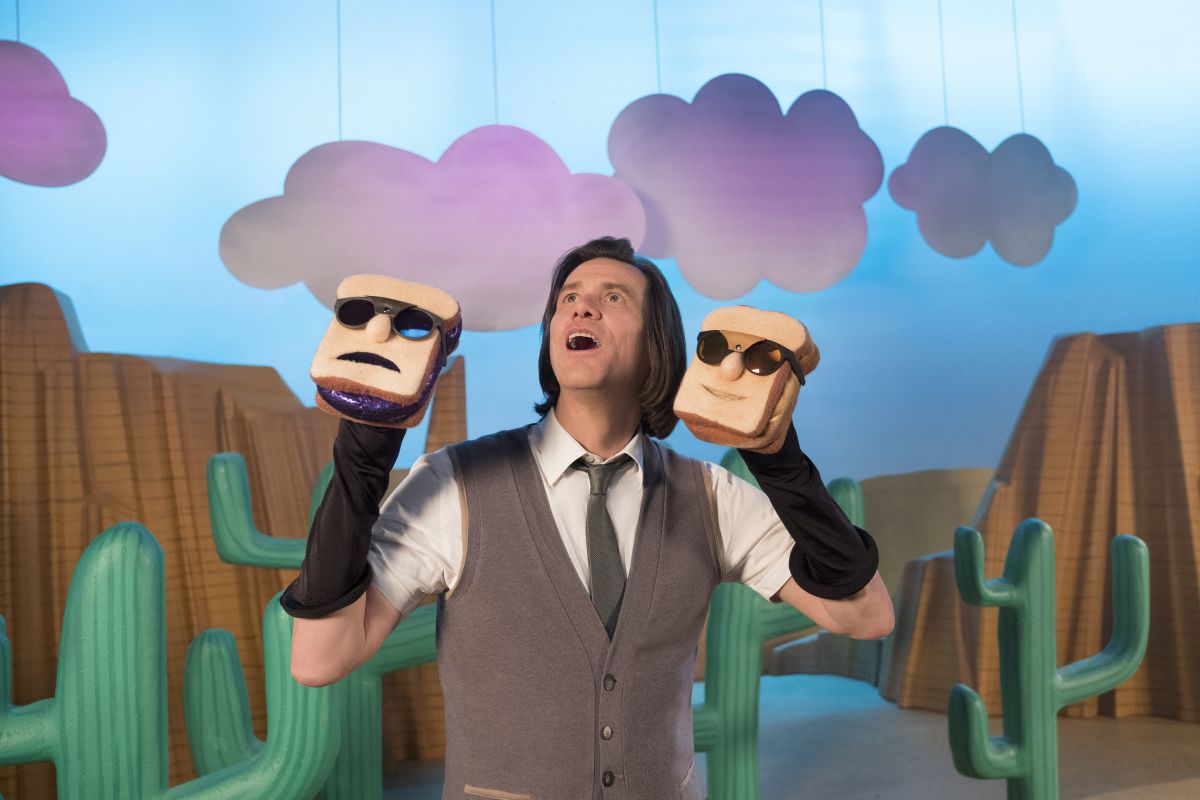 Don’t let the title of Jim Carrey’s television show, ‘Kidding’ fool you. It presents quite a bleak and heart-breaking tale, under the guise of a children’s television show. The series has been acclaimed for providing a poignant exploration of life and sadness with its inventive premise.

Jim Carrey stars as Jeff Piccirillo, the presenter of long-running children’s show known as “Mr. Pickles’ Puppet Time” which is similar to the actual television series, ‘Mister Rogers’ Neighborhood.’ However, Piccirillo suffers from depression and grief despite presenting a jovial face for “Mr. Pickles’ Puppet Time.” He is saddened over the premature death of his son, Phil and his separation from his wife. Plus, he also has a troubled relationship with his father.

A reviewer on Rotten Tomatoes, Keith Watson has described the show’s exploration of a difficult topic in this manner: “It’s hard to imagine anyone else commanding our empathy so well as he walks the line between joy and pain, tearing at our heartstrings then nudging us in the ribs with a chuckle. The effect is unsettling – and meant to be.”

While some critics have pointed out the fact that the show is difficult to watch, its juxtaposition of colorful, children’s TV “joy” with the grief of its protagonist remains to be a quality storytelling technique. The show marks another collaboration between Carrey and Michel Gondry. The two had previously worked alongside each other for the 2004 movie, ‘Eternal Sunshine of the Spotless Mind.’ Gondry had directed that film and serves as the executive producer for ‘Kidding.’

If you are wondering where was ‘Kidding’ filmed, we have got you covered. Read on.

Many of you might be wondering where ‘Kidding’ is filmed. The show is set in Columbus, Ohio where Carrey’s character is depicted to live. Apart from that, the story also takes place in Los Angeles occasionally. So, has the show actually been filmed in Columbus and Los Angeles? Or have the makers used another location and passed it off as the setting of the show? Continue reading to find out.

‘Kidding’ may be set in Columbus, Ohio but it is not actually filmed there. Instead, it is filmed in and around Los Angeles, California. The series’ makers employ a combination of location filming and in-studio shooting.

Jim Carrey was spotted filming "Kidding" In Los Angeles. He was wearing a puppet head modelled after his own character "Jeff Pickles". Check all photos.

A large chunk of ‘Kidding’ is filmed at Sony Pictures Studio in Culver City. It is a state-of-the-art production facility that houses sixteen soundstages and is recognized for its cutting-edge facilities that allow filmmakers to effectively shoot scenes that heavily require the use of visual effects.

However, apart from filming in the studio, ‘Kidding’ also features several scenes that have been filmed on location in and around Los Angeles. For instance, according to local sources, filming for the television series had been carried out on 3011 Miner Street in Los Angeles.

Moreover, in the first episode of the series, Carrey’s character can be seen attending a late-night talk show with Conan O’Brien. This scene had been filmed on a set at the Warner Brothers Studios in Burbank, California.

The makers of the show have been quite creative with the way the television series is filmed. Several scenes of the show involve Carrey in a puppet costume, thanks to the show-in-show format of the series. Plus, there are also some vibrant, visually appealing frames that can be spotted.

A scene that was filmed as a one-shot, one-take exercise in the third episode of the first season has received particular attention from viewers and critics alike. It portrays a woman having her life transformed due to Piccirillo’s show. The creators worked on choreographing the scene on a Saturday and spent the entire day doing so. Have a look at the following video which shows a side-by-side comparison of the scene and its making: