Where is Leah Messer From Teen Mom 2 Now?

MTV TV reality show “16 and Pregnant” filmed the day to day life of Leah Messer as a ‘knocked up’ teenager who had made the tough choice of keeping her baby, and in her case, babies. Her transition from a reckless teen into a proud and responsible mother of three daughters is astounding. With a brief history of drug addiction and a train of broken relationships, Leah has emerged as a quintessential single mother who is solid as a rock. Here is everything we know about the show’s most interesting contestant! 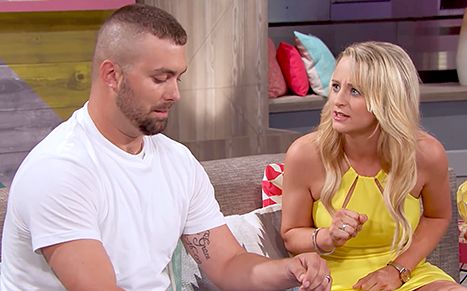 Leah Messer’s journey on “Teen Mom 2” started on a better note than most. Her then-boyfriend, Corey Simms was supportive and the two seemed to be on the same page as far as their relationship was concerned. Leah Messer had a pair of twin girls with Corey by the time she turned 18. She starred in the American reality show in 2010 with her daughters, Aliannah Hope “Ali” Simms and Aleeah Grace Simms born in 2009. Ali was diagnosed with a rare form of muscular dystrophy in 2014. It is a genetic disease that causes progressive weakness and loss of muscle mass.

Leah is seen sacrificing everything to look after her daughters and complete her graduation side by side. But along the way, her relationship with Corey takes a backseat. They continually bicker, unable to find a peaceful way to co-parent Ali and Grace and eventually about custody or visitation rights. The two separate in 2010 after which she starts dating Jeremy Calvert by August of 2011. After almost eight months of courtship, Jeremy proposes Leah, and the couple gets married on April 4, 2012.

Both seem perfectly happy with each other and feel stronger together after Leah going through a miscarriage in 2011. They have their first child, Adalynn Faith “Addie” Calvert, on February 4, 2013, but sadly, Leah suffers from postpartum depression for which she is prescribed anti-anxiety pills. Her fans see Leah picking up nasty fights with Jeremy about his working away. By the end of the 6th season, Leah is asked by the court to take drug tests due to her hyperactive behavior and she takes the unfortunate decision to officially end the marriage.

After three years of marriage, the two get legally divorced on June 8, 2015, with Leah gaining complete custody of Addie and Jeremy having only visitation rights. They seem to be on amicable terms and do not have any bad blood between them.

Where is Leah Messer Today?

A lot has happened since the last time the mother of three daughters was seen on the screen. Leah Messer recently made a profound confession about her addiction to drugs after delivering her third child. The pain killers that were prescribed to her, after Addie was born, were taken in copious amounts as Leah liked feeling numb and almost like a “zombie”. Her addiction and the depression combined to mess up her normal temperament and this culminated in her having suicidal thoughts.

Unleashing the stigma that surrounds drug addiction, Leah feels “cathartic” after undergoing a month-long treatment program. She got the help she desperately needed from the producer of the MTV series. The rehab picked her up from the lowest point and helped her recognized the strength that her daughters’ love instilled in her. Afraid to lose her daughters in the process of recovery, she kept this information away from mainstream media for as long as possible.

She has come out a new woman who has known the darkest corners of herself and has kept the faith to bring light back into her life and that of her daughters. Inspired by the same idea, she has penned down her life experiences and got it published as a book titled, “Hope, Grace & Faith”, which are the middle names of her three daughters.

Read More: Where is Chelsea Houska From Teen Mom Now?