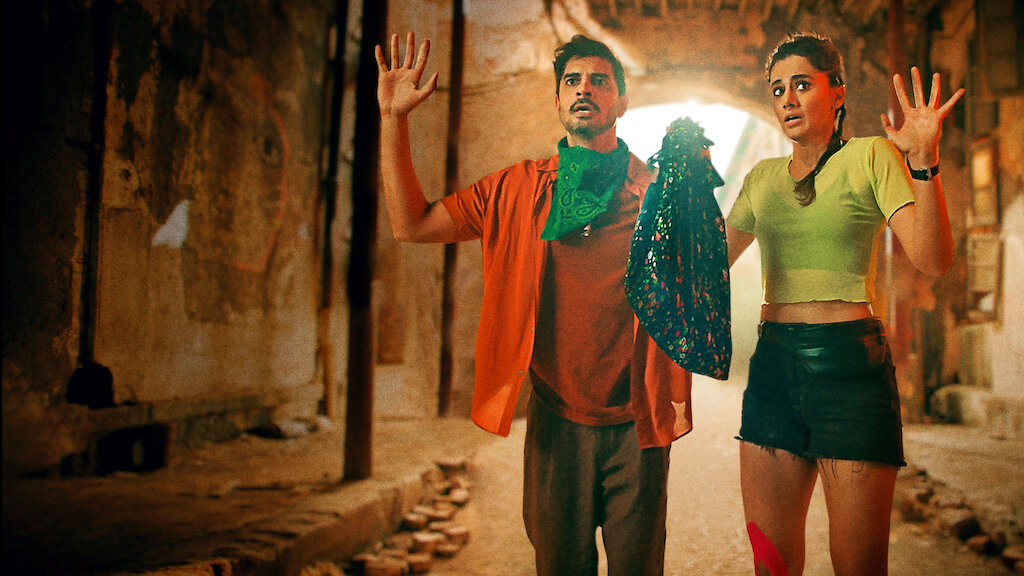 Netflix’s ‘Looop Lapeta’ is a fast-paced Hindi language thriller and the Indian remake of the 1998 German thriller ‘Run Lola Run.’ The story follows Savi (Taapsee Pannu) as she desperately tries to save her slightly bumbling boyfriend, Satya (Tahir Raj Bhasin), from the mob. The film’s format is intriguing and keeps throwing Savi back to the beginning of the narrative every time she fails to save Satya.

The frantic young woman’s mission touches the lives of multiple colorful characters along the way, irreversibly changing each of them. By the end, Savi gets tantalizingly close to getting everything she’s trying to get and more. But does she make it? A lot goes down in the final moments of this roller coaster ride, so let’s take a closer look at the ending of ‘Looop Lapeta.’ SPOILERS AHEAD.

The story opens with former athletic runner Savi, who has languished in a melancholy state ever since an injury ended her sports career. When a small-time hustler named Satya stops her from committing suicide, the two fall deeply in love. Wanting to forget her shattered dreams, Savi gets into using drugs and spending days in bed with her lover. Satya, meanwhile, is revealed to be a chronic grifter, perpetually looking for a quick way to make it big. On multiple occassions in the movie, Savi (and even her father) stress that someday Satya is going to get into deep trouble, and it seems like that day happens to fall on our heroine’s birthday. 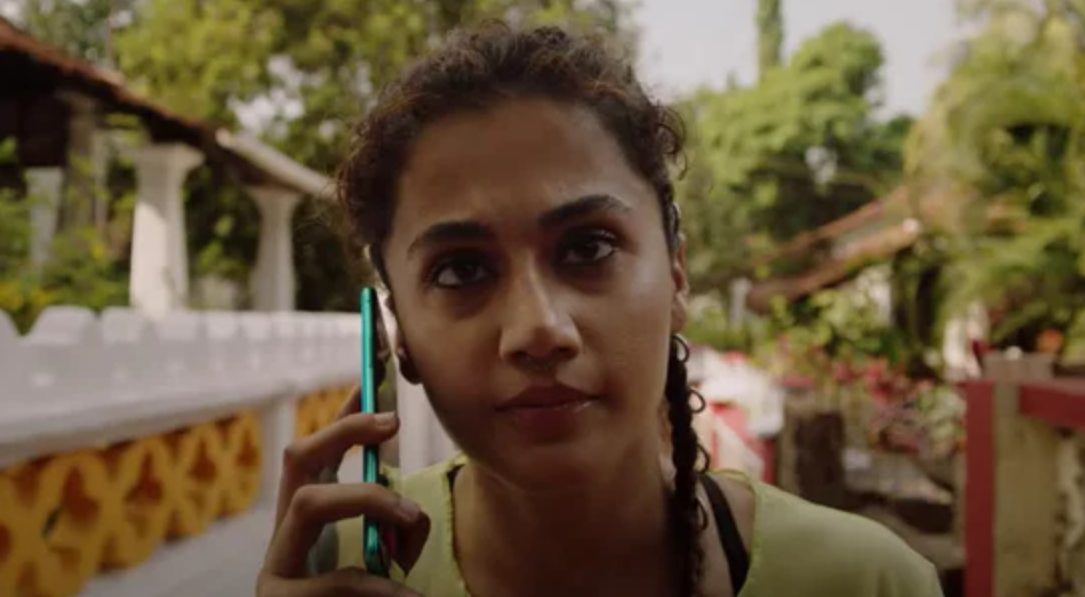 On the fateful day, Savi finds out that she’s pregnant before getting a call from Satya, who explains that he’s in deep trouble. As it turns out, the bumbling boyfriend has gone and lost a significant amount of money that belongs to a ruthless local gang leader. Scared senseless, Satya then attempts to search for the money before finally deciding to rob a jewelry store to recoup the money and save his skin. Savi, meanwhile, starts on a surreal run across town as she tries to reach Satya before he does anything stupid.

On the way, Savi’s paths cross with a heartbroken taxi driver named Jacob and a dogged policeman that relentlessly chases her. The frantic girlfriend also has an argument with her father. Finally, she arrives at the jewelry store, where Satya’s botched robbery is underway. As it turns out, two other young men have decided to burgle the store at the same time. Satya is subsequently shot dead by the shop owner, and Savi breaks down, crying hysterically.

We are then taken back to a quick sequence of Savi and Satya lying in bed at home before the loop is reset, and Savi finds herself back at the beginning of the day. However, she still remembers the events that now lie ahead of her, and sure enough, she gets a call from a panicking Satya. The series of events once again plays out, but slightly differently. However, in the end, Satya is once again shot, this time by Jacob.

Once again, the loop resets. However, this time Savi realizes that she must fix her mistakes if she wants to succeed and break out of the repetitive loops. She once again embarks on her frantic run across town but takes a detour this time and helps Jacob reunite with his lover. In return, Savi gets a few envelopes of money which she uses to gamble at a casino. Against all odds, she wins big. Meanwhile, Satya is unaware of the time loops and is constantly surprised by how his girlfriend inexplicably knows certain things are about to happen. 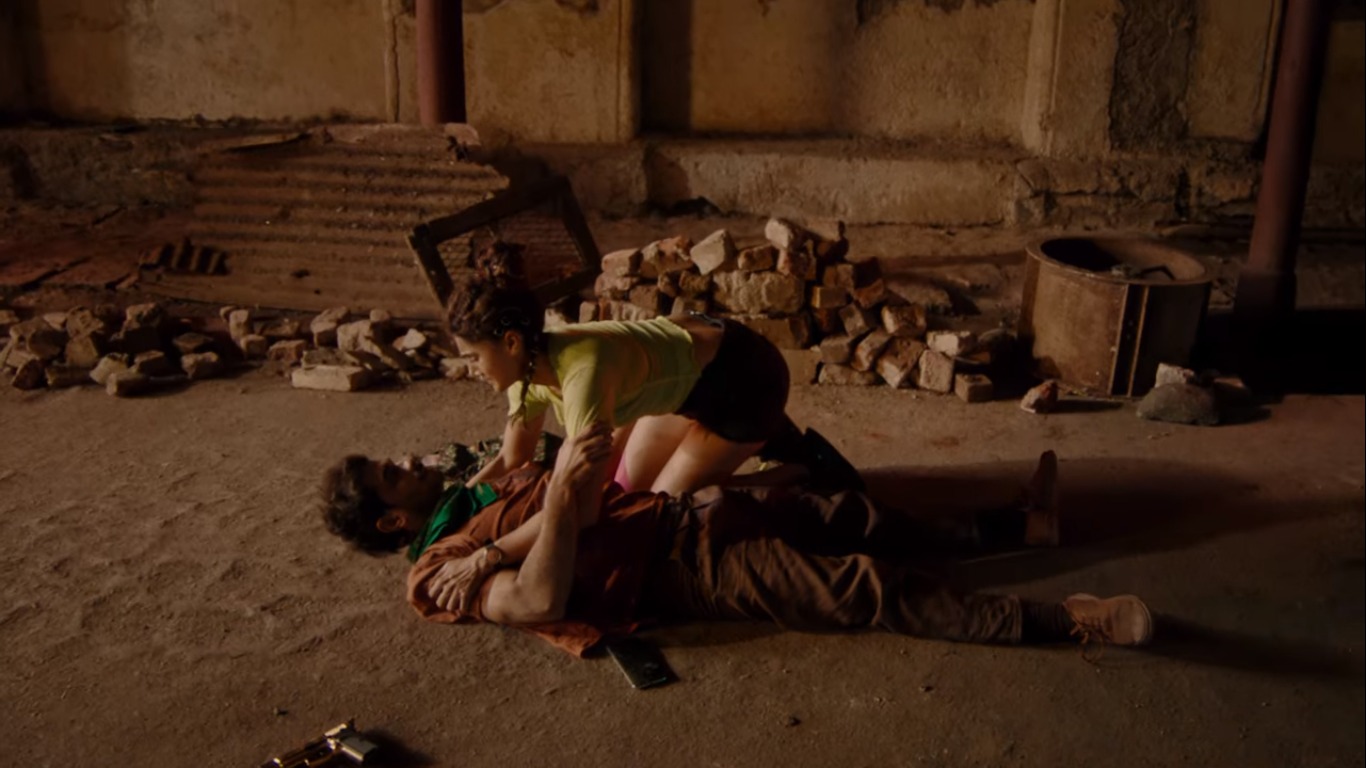 Not knowing Savi has won, he burgles the store but again gets caught up with the other thieves who simultaneously try and do the same. This time, however, Satya comes away with the money. As the film closes, Satya and Savi meet, each holding a bag of money, one of which they give back to the ganglord. Then, as the couple hugs, the man that initially stole Satya’s bag money walks past. As the film closes, Satya notices the man with the bag and runs after him, dragging Savi along.

And so, the film closes with our heroine once again running, chasing down money. However, the one significant difference is that this time, her lover is with her. The entire narrative follows Savi trying (multiple times) to save Satya on her own. At the end of the first two loops, Satya is shot — first by Mamlesh, the jewelry store owner, and then by Jacob, the heartbroken taxi driver. The third time around, as Satya escapes from the jewelry store with the stolen money, Mamlesh fires at the desperate thief but misses, instead shattering a police car window. Thus, after dying in the first two loops, Satya eventually survives the last loop and is, therefore, alive at the end of the movie.

The structure of the narrative sees Savi essentially go through the ordeal three times, thus allowing her to get better at beating the enormous odds with each successive try. The first loop ends with her neither getting the money nor saving Satya’s life. The second time around, after doing a line of cocaine, Savi embarks on a frantic path which ends with Satya successfully stealing the money but then getting shot by Jacob. The third time around, Savi gets the money and saves her boyfriend, essentially completing her journey. Ironically, the film then closes with her embarking on another chase, but this time with Satya (who is now her fiance) beside her.

How Does Savi Get the Money?

The theme of Savi’s story seems to be her beating astronomical odds, and nowhere is this more apparent than in the film’s climax. She uses the money that Jacob and Julia give her for reuniting them to place a single “all-in” bet on the roulette table. Since this is the third loop, Savi is now aware that she has been given everything she needs to succeed. All she has to do is find it. 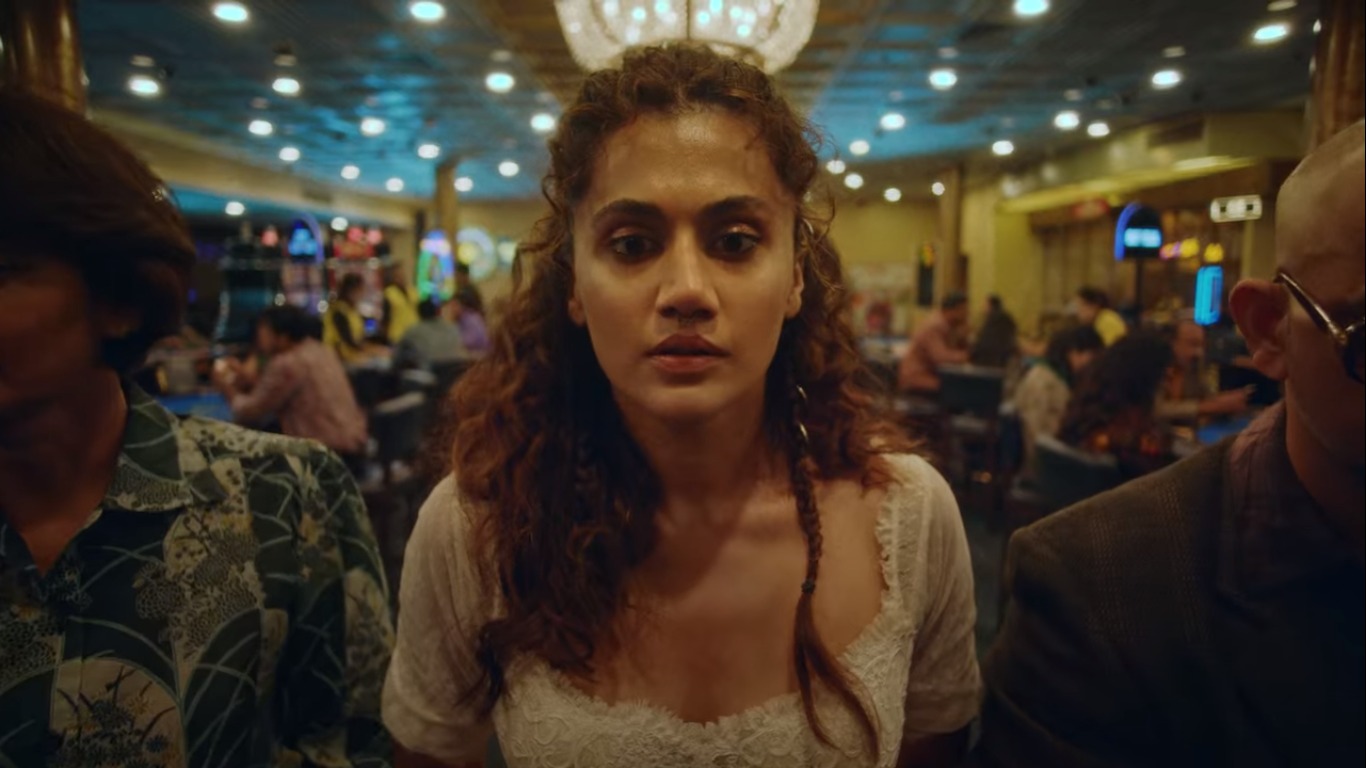 Thus, the one number that comes to her mind is 8, which symbolizes the time in the morning that the loop resets to every time. Savi’s narrative (repeatedly) starts with her in the bathroom at 8 A.M., so she decides to pick the number. The film’s surreal nature makes it very easy to go along with Savi winning big — which she does — and walking out of the casino with huge bundles of money.

Do Satya and Savi End Up Together? How Much Money Do They Have?

Yes, Satya and Savi end up together and get engaged at the film’s closing after the latter proposes to the pleasantly surprised former. Notably, in the third loop, which is when Satya survives and the two get engaged, even Savi’s father comes around and agrees to give her dodgy “featherweight boyfriend” a chance. 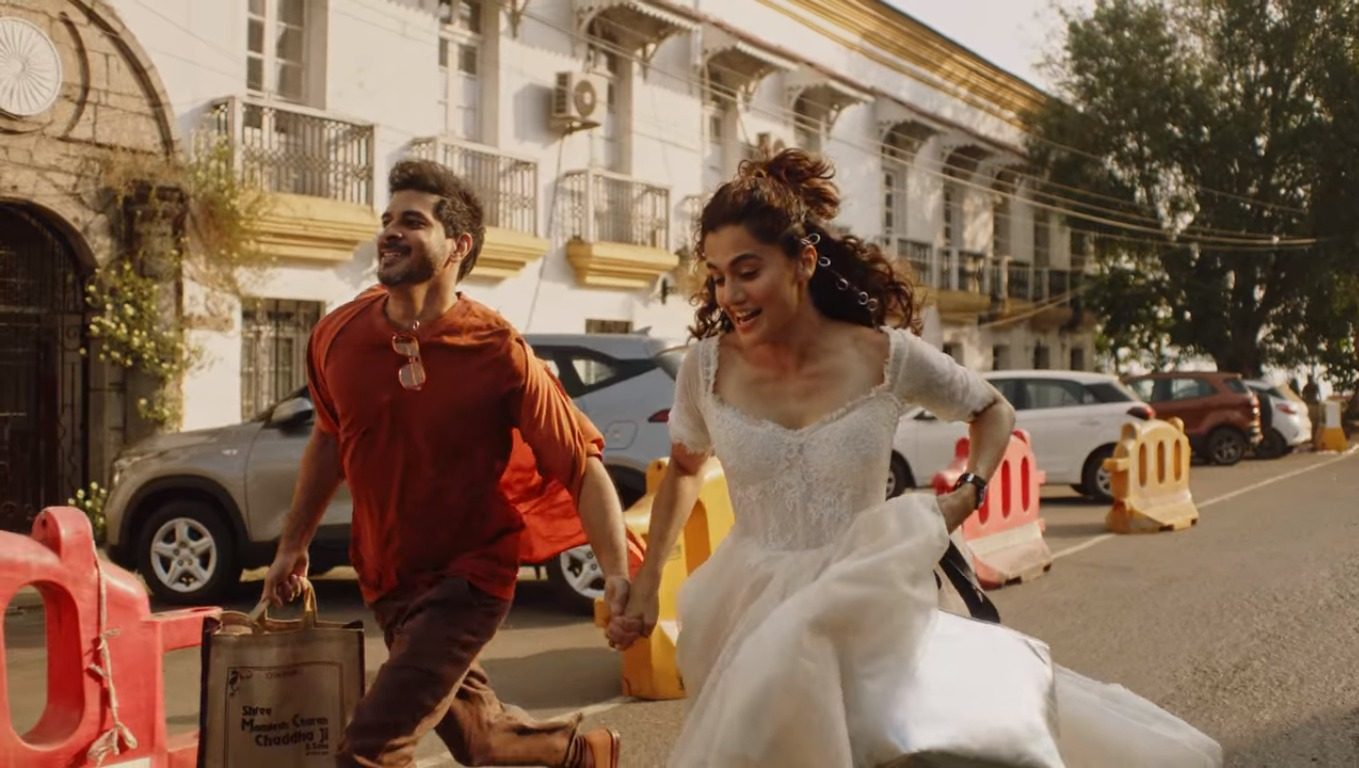 However, as the film’s closing shows, ending up together might not be as blissful as it sounds, and soon after getting engaged, Savi finds herself being pulled by Satya as they once again embark on a breathless chase, this time after the man that initially stole the bag of money from Satya. In fact, in the second loop, while advising Julia against marrying Jacob, Savi ominously portends how getting caught up with the wrong man results in repeating one’s mistakes and getting stuck in a loop.

Ironically, this could end up happening to our heroine — a point that is stressed when the ganglord says that Satya is to return for another assignment the following day. However, Savi and Satya’s new engagement also has a lot going for it. Apart from the baby that’s on the way, they also close the third loop with a nice chunk of money. Though Satya has to return the 5 million rupees (about $66,000) he steals from the jewelry shop to the gang lord, the couple gets to keep the money that Savi wins. Considering she planned on repaying Satya’s debt with the money she won at the casino, Savi’s bag also likely contains around 5 million rupees. 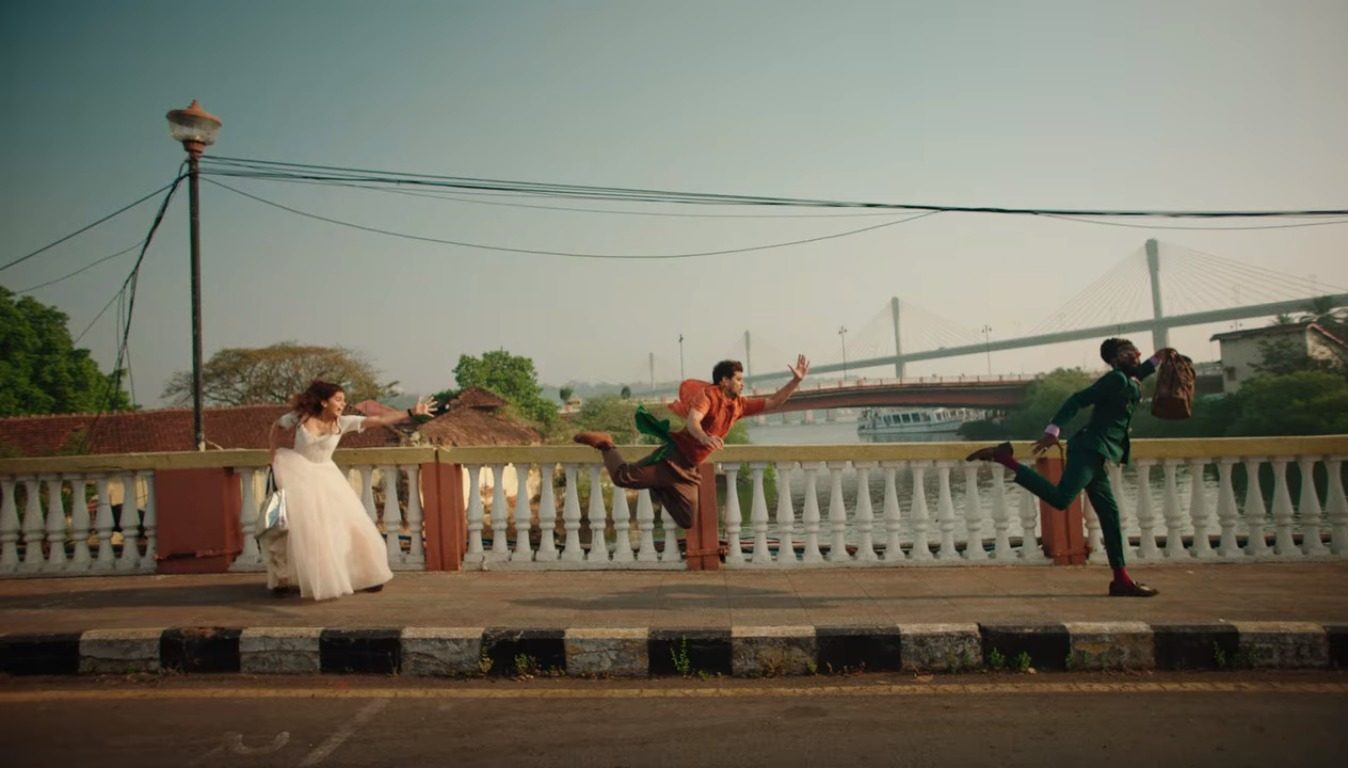 The question remains whether they can recover the bag from the man they chase in the film’s closing scene. If they do, this adds another approximate 5 million to their kitty, bringing it up to a nice round 10 million rupees (minus the relatively small amounts the thief spent on his swanky new suit.) Of course, if they cannot catch the man who stole the bag, Satya and Savi still end up with about 5 million rupees, which isn’t too shabby.

Read More: Is Looop Lapeta on OTT, Netflix, Prime, Hotstar? Where to Watch it Online?