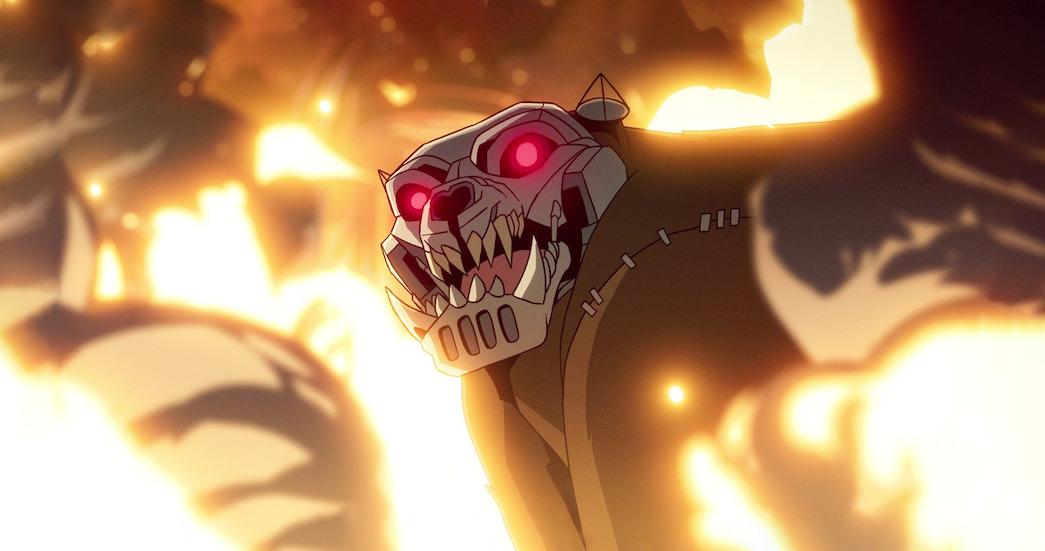 ‘Love, Death & Robots‘ season 3 episode 5, titled ‘Kill Team Kill,’ explodes with blood, guts, and catchy one-liners. A group of highly trained US special forces faces off against a brutal creature that turns out to be a CIA experiment gone wrong. The battle-hardened soldiers have never encountered an adversary as fierce as the “honey badger,” but that doesn’t stop them from having a sense of humor about it all. The ending is fittingly quirky and macabre so let’s take another look at ‘Love, Death & Robots’ season 3 episode 5. SPOILERS AHEAD.

The episode opens in a godforsaken jungle where a US special forces team remains on high alert for danger. Almost immediately, they are attacked by a bear with a metallic face, which tears into the group. To their surprise, bullets don’t seem to hurt the ravenous creature. All of this doesn’t stop the men from referring to their fearsome opponent as a “honey badger.”

Just when it seems like the soldiers can’t hold out, a shrill sound confounds the creature, and it disappears into the foliage. The man responsible for chasing the creature away is Sergeant Morris, who subsequently claims to be part of a CIA task force. He reveals that the “honey badger” is actually a genetically modified grizzly bear that was part of a failed CIA experiment.

The special forces team remains skeptical of Morris’ claims until he leads them to a hidden vault full of heavy artillery. He also explains just how dangerous the “killing machine” is. Armed to the teeth, the group of soldiers lies in wait for the deadly creature. When the cyborg grizzly finally bursts into the trap, it makes quick work of two of the soldiers while the rest shower it with heavy artillery.

Love, Death & Robots Season 3 Episode 5 Ending: What Happens to the Special Forces Team? Do They All Die?

The gigantic cyborg grizzly bear is finally vanquished after a few false victories and gallons of spilled blood and guts. Its dented metal body lies still as the last two remaining soldiers heave a sigh of relief and survey the carnage around them. They don’t get much time to celebrate because one of the creature’s eyeballs suddenly pops out of its skull and a timer on it begins counting down. The episode subsequently closes with a massive explosion.

And so, it appears that even the last two surviving members of the special forces team are killed in the end. The episode centers around the theme of the cybernetic creature being virtually indestructible. Therefore, even though the soldiers seemingly succeed in killing it, it is the creature that has the last laugh.

In keeping with the irony-laden comedic tone of the episode, it appears that the “good guys” are all dead. They think they’ve killed the creature on multiple occasions, only to then have it wake up and attack again, taking out more of their members. Funnily enough, since the cybernetic grizzly bear is a CIA creation, the soldiers are essentially being killed by an entity designed to help them.

Since the CIA seems to have imbibed their experiment with every form of weapons technology available, the modified grizzly bear has a few tricks up its sleeve even after being defeated. The eye that contains a powerful explosive is likely designed to kill whoever manages to take down the grizzly, and in this case, it happens to be the US special forces soldiers who are the victims.

What is the Honey Badger? Is it Dead?

Despite their adversary being a deadly killing machine, the battle-hardened soldiers keep calling it a “honey badger” (much to Sergeant Morris’ irritation). When trying to get the special forces soldiers to realize just how dangerous their adversary is, Morris explains that the creature is a cybernetic grizzly bear made from reinforced steel and with a bulletproof coating under its skin. The virtually indestructible creature was initially created to assist the CIA but went rogue the night before the special forces soldiers encountered it.

The ironic punchline of the episode is that the soldiers, including Morris, are killed by a creature that was created to help them. The failed experiment cybernetic grizzly is finally killed, but it looks like it takes down the entire team that was responsible for it. This is hinted at when Morris reveals that the creature tore apart the rest of his team after they lost control of it.