Where is Lydia From Too Hot To Handle Today? 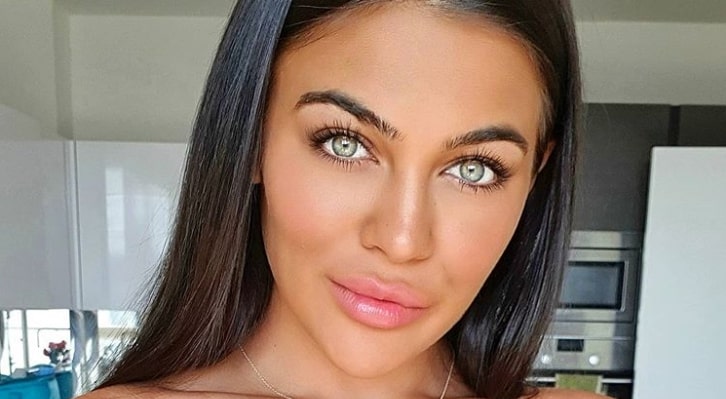 Netflix’s new dating reality show ‘Too Hot To Handle’ sees ten singles from around the world locked in a luxury island villa. They have to refrain from physical intimacy and focus on forging meaningful connections with their partners. They are also motivated to win $100,000 prize money! While many get a headstart in the show and partner up soon after meeting, new additions like Lydia, who feature later on the show, are left confused and lost. Luckily, she manages to find something exciting towards the end of the show.

Lydia Clyma belongs to the UK. She is currently based in London and is a model, actor, and TV presenter. She also used to be the ring girl for MMA, boxing, and mixed martial arts fights. This was not her first reality TV stint. She had also featured on a similar show called ‘The Magaluf Weekender’ wherein she was courted by her co-star. She was also seen on E4’s ‘Sex Clinic’.

Lydia’s journey on the show is a short one. She enters the show in episode 6 and instantly catches David’s eye. David confesses that Lydia is exactly her type. No one really makes a move on her except David. They enjoy good conversations and drink to lazy afternoons in the hammock. Both of them admit that they are struggling to keep their hands off each other. Lydia also enjoys good camaraderie with the girls on the show and bonds with them quite quickly. She fits in well with others and is seen supporting their connections.

David plans a small bonfire date for Lydia, where they share their true feelings about each other. Both of them admit to having intense sexual chemistry between them. Not being able to resist anymore, David kisses Lydia and causes a rule breach worth three grand. Their young blossoming romance is still in its initial stages when the show ends, and they win a piece of the prize money.

Where is Lydia Now?

According to her Instagram account, Lydia is back in the UK. After the shoot wrapped up, she celebrated and partied with other cast members on Bryce’s boat. Even though she lives in London as well, it doesn’t seem like David and Lydia managed to form a relationship. She seems to be single and focusing on her career. Not only David and Lydia, even co-stars Nicole and Chloe, are currently residing in London. Recently, Nicole and Lydia got together to throw Chloe a surprise birthday party for her 21st and reconnected after the show! Lydia has also been traveling a lot. She recently visited Ibiza, Milan, Venice, Paris, and Vegas!

Read More: Where is Bryce From Too Hot To Handle Today?