Where Is Maggie Nichols Today? 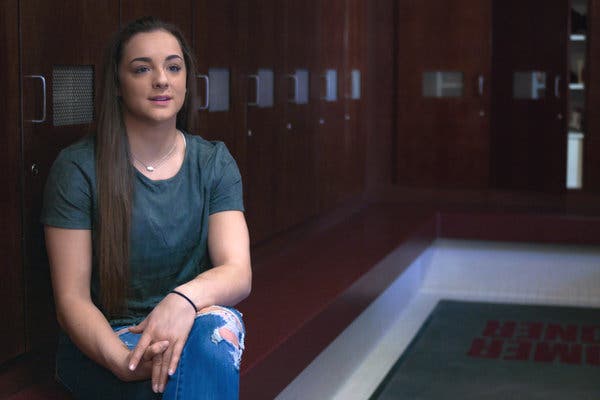 An investigation by the Indianapolis Star, which began in 2016 with help from survivors, police, and attorneys, brought a USA Gymnastics (USAG) doctor, Larry Nassar, to justice. He had molested hundreds of young girls and had put a strain on their psyche that we can’t even begin to imagine. But, it turns out, the assault on the girls went much deeper than that, and the Netflix documentary, ‘Athlete A,’ gives us the horrifyingly meticulous report of the true toxic culture in USAG.

‘Athlete A’ – named after Maggie Nichols, who was one of the first people to come out with the accusations against Nassar publicly – unpacks not just the sexual assaults but also how the other athletes are trained to obey and follow every command that is given to them by the USAG coaches and staff members. It’s is named so because that is the alias that was used to protect Maggie’s identity when the case was in the public eye and in court.

Who Is Maggie Nichols?

Margaret Mary Nichols was born on September 12, 1997, in Little Canada, Minnesota to Gina and John Nicholas. When she was little she used to jump from cribs and balance on little ledges, so as soon as she was old enough, she joined gymnastics classes to be in a safer environment, and fell in love. She fell in love with the sport, the elegance, and the grace, so, she worked hard to be one of the best in it.

By the time Maggie was 10, she was already under the eyes of national coaches, and in 2013, she got the opportunity to be on the senior national team as an elite gymnast. She trained under Bela and Martha Karolyi and represented the United States in various international competitions, including the 2015 World Artistic Gymnastics Championships, where she won a gold medal with the team and an individual bronze medal for the floor exercise. At the USA Gymnastics National Championships, Maggie was the bronze medalist in the all-around, the uneven bars, and the floor exercise in 2014, and a silver medalist in the all-around in 2015.

Before suffering from a meniscus tear and going through an operation in early 2016, she was a contender for the U.S. women’s gymnastics team at the 2016 Rio Summer Olympics, which was her dream. Maggie was just second best after Simone Biles. Unfortunately, in July 2015, she had openly complained about Larry Nassar and his behavior towards her during treatment, so when that combined with her average performance on selection day, she wasn’t even selected as an alternative for the team. Crushed, heartbroken, and not even close to receiving justice, she retired as an elite gymnast.

Where Is Maggie Nichols Now?

After retiring, Maggie went on to be a collegiate artistic gymnast for the University of Oklahoma. She started participating in the NCAA and was the ninth to complete the Gym Slam for them, and the first gymnast to have achieved that feat twice. On March 12, 2020, after a few extremely successful years as an NCAA Gymnast, she retired from that as well. In April, Maggie became the first recipient from Oklahoma to win the AAI Award. Her abuser had received the sentence he deserved along with a public tongue lashing from his victims, she was completely in love with the sport again, and so, she was finally ready to move on.

Now, Maggie wants to coach instead of compete. And, from her past experiences, it’s evident that she would break the cycle and care for the children and the gymnasts just as much as she does for the sport. She hoped to work as a student coach for the Sooner, while she completed her degree at the University of Oklahoma, but it seems unlikely now because of the COVID-19 pandemic. She has also publicly indicated that she is interested in writing a book and maybe working in sports broadcasting in the future. (Featured Image Credit: Netflix / Athlete A)