How Many Oscars Has Meryl Streep Won? And How Many Did She Deserve? 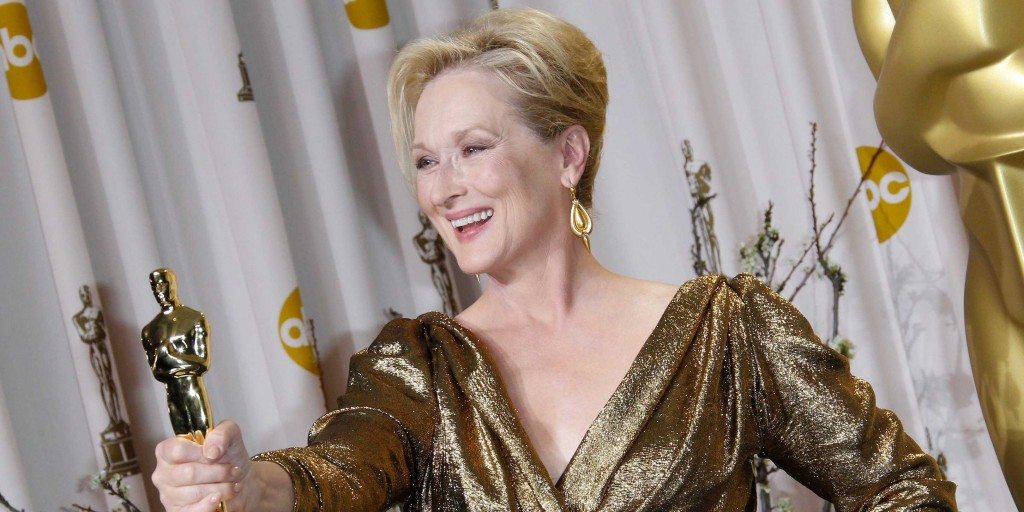 As Meryl Streep possibly marches towards her 20th Academy Award nomination, a Best Actress nod for her wonderful performance in Florence Foster Jenkins (2016), a surprise box office hit this past summer, I thought it might be interesting to go back and look at her nominations and wins.

I have always believed if someone gave the finest of the year, they should win, no matter how many times they had won previously, no matter if they won the year before, if they do great work, if they give the finest performance of the year, then the Oscar should be theirs. Even Marlon Brando famously refusing to accept his Oscar for The Godfather (1972) should have won the year after for Last Tango in Paris (1973), one of the great film performances of all time!!

There were twenty eight years between Streep winning her first Oscar for Best Actress, and her second. Twenty eight years. An entire generation of film goers had read and been told this woman was the greatest actress in film history yet had not seen her win an Oscar!! They saw Sally Field win twice, Jodie Foster win twice and Hilary Swank win twice, but not Streep, not even once. For nearly thirty years, Streep sat in the audience as lesser actresses walked to the podium  for lesser performances, as sentimental awards were doled out, and as the nominations were racked up.

And of course, even the great Streep has been victim to fine work being snubbed, though only a couple and yep, I took a look at those too.

THE DEER HUNTER (1978): Her performance as Linda is exceptional when one considers she created the role on set, and refused to portray the character Cimino had written, which was non-existent. She was very good in a tight ensemble where the bulk of attention went to the men. YES.

KRAMER VS KRAMER (1979): She won the Oscar for supporting actress, well deserved, one of the great film performances of all time. In addition to the Oscar she won wards from the Golden Globes, New York Film Critics Circle, the Los Angeles Film Critics Awards, and the National Society of Film Critics.YES.

THE FRENCH LT.’S WOMAN (1981): Brilliant work from Streep. Katherine Hepburn won the Oscar for On Golden Pond (1981) but it should have been Jessica Lange for her non-nominated work in The Postman Always Ring Twice (1981). YES.

SILKWOOD (1983): Incredible transformation, and a well deserved nomination. Shirley MacLaine was the deserved winner for Terms of Endearment (1983). YES.

OUT OF AFRICA (1985): The LA Film Critics gave the actress their award for Best Actress, she was runner up in New York Film Critics voting, and then lost the Oscar to a sentimental choice, Garaldine Page. She should have won…period. YES.

IRONWEED (1987): Again a great piece of acting in a tough, depressing film opposite Jack Nicholson. Holly Hunter should have won the Oscar for Broadcast News (1987) rather than the winner, Cher in Moonstruck (1987). YES.

POSTCARDS FROM THE EDGE (1990): A wonderful comedic performance from Streep and she knocks us out at the end of the film displaying stunning singing talent. She and Shirley MacLaine make a great team as a drug abusing daughter, and her famous Mom. Streep was nominated, lost to Kathy Bates in Misery (1990) though it should have been to Anjelica Huston in The Grifters (1990). YES.

THE BRIDGES OF MADISON COUNTRY (1995): She might have won for this luminous performance opposite Clint Eastwood who directed the film. Streep dominates the film with a perfect performance as an Italian woman living in Iowa on a farm, and bored out of her mind. She lost to Susan Sarandon for Dead Man Walking (1995) a fine piece of acting, maybe a bit of a sentimental award, though it is a tough choice to argue. Maybe Streep, maybe not. YES.

ONE TRUE THING (1998): As a woman dying of cancer she is perfection and I say this as a man who watched his wife die of cancer, in my arms eventually. She has it all here, the concern for everyone but herself, and that strength women have which men lack. Gwyneth Paltrow won for Shakespeare in Love (1998) but it should have been Cate Blanchett’s year for Elizabeth (1998). YES.

MUSIC FROM THE HEART (1999): A curious nomination, and maybe one that was not deserved. She is good no question, she is always good, but also the least of the nominees, and there were a couple of performances not nominated that surpassed hers. Hilary Swank won for Boys Don t Cry (1999) and rightly so. NO.

ADAPTATION (2002): For her superb performance as writer Susan Orleans, Streep should have easily won for supporting actress, as it was the best of the year and among her finest performances. She lost to Catherine Zera-Jones in Chicago (2002). Seriously? YES.

THE DEVIL WEARS PRADA (2006): Her icy Miranda was a thing of pop culture brilliance and a magnificent creation that earned a well deserved nomination. But this was the year Helen Mirren was crowned in The Queen (2006) and rightly so. YES.

DOUBT (2008): As a righteous, potentially vicious Mother Superior type, she lashes out and accuses a priest of wrong doing with a child and follows through the consequences. Her breakdown in the yard at the end shows she has doubt, leaving her questioning herself. She lost the Oscar to Kate Winslet in The Reader (2008) who deserved to win for Revolutionary Road (2008) that same year. YES.

JULIE VS JULIA (2009): The New York Film Critics again honored Streep with their Best Actress award for her superb performance as Julia Child and she seemed Oscar bound. And she should have been. Sandra Bullock took the Oscar for The Blind Side (2009)..a crime, because it should have been Streep winning. YES.

THE IRON LADY (2011): Here I am in a quandary. She won, her performance was terrific, but it was not better than Tilda Swinton in We Need to Talk About Kevin (2011) who should have won but was not even nominated. Streep was good, outstanding as the elderly Thatcher, but Swinton, well, she was on another plane. YES.

AUGUST – OSAGE COUNTY (2013): Again portraying a woman dying of cancer, the matriarch of a troubled southern family, she is a twisted, vicious woman who even her own family dislikes. Again, she is brilliant, but Cate Blanchett won and she should have for Blue Jasmine (2014) one of the screen’s great performances. YES.

INTO THE WOODS (2014): As the witch Streep is having a blast, and she is very good, but it is a questionable nod at best. Miss Arquette won the award and so she should have. NO.

She should have also been nominated for:

PLENTY (1985): Her seething performance as a vicious woman who will do whatever it takes to survive during the war, Streep is remarkable. But the Academy allows a single nomination in acting categories and she was nominated for Out of Africa (1985).

THE HOURS (2002): In a stupid error by the studio, her name was not put forward for a nomination and it did not happen. It should have, because the rest of the cast was nominated and she was the lead. She should have been nominated, and it is shameful she was not.

THE MANCHURIAN CANDIDATE (2004): An effective and chilling performance as a politician grooming her son for the Vice Presidency and eventually the top office, she is a clear eyed zealot.

THE PRARIE HOME COMPANION (2006): As one half of a sister singing duo, with a daughter on the rise, Streep is terrific, folksy and spot on as a mid-level celebrity who is comfortable with where she is in her life.