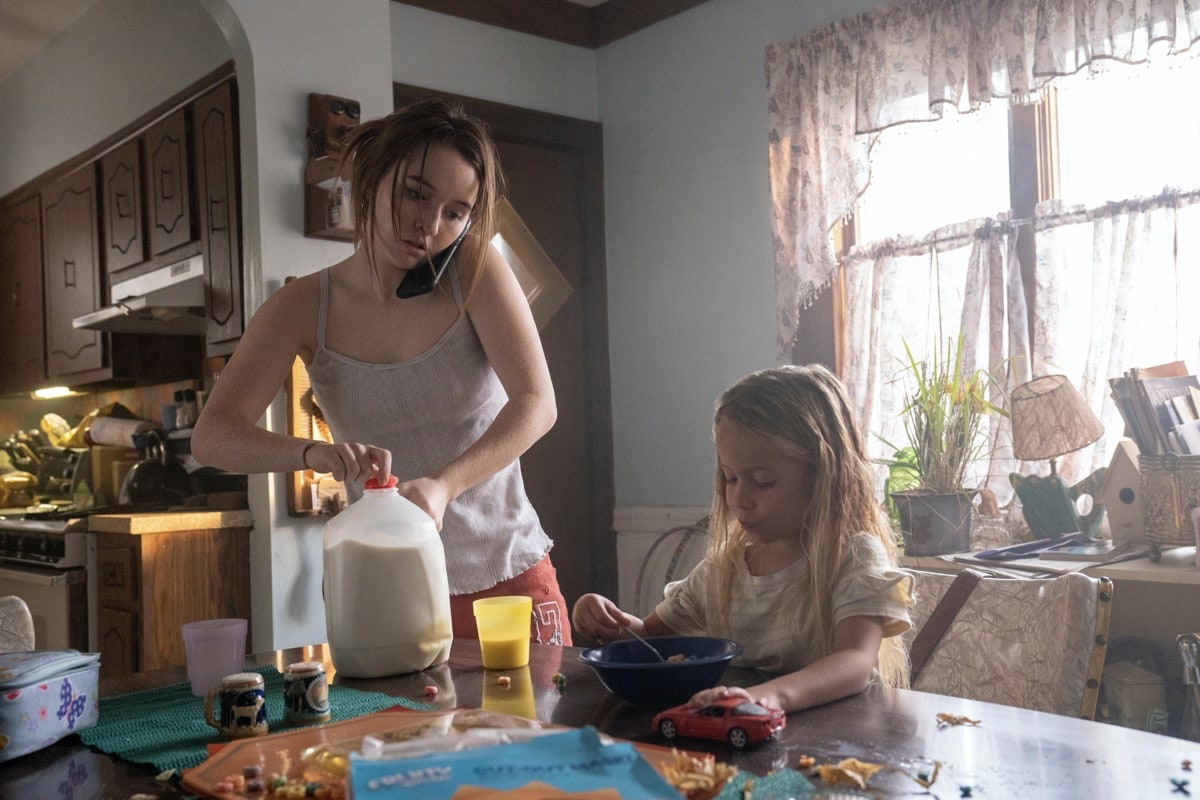 The first half-hour of the pilot episode of ‘Monsterland’, Hulu’s anthology series, cleverly deceives its audience about the nature of the show. While the trailer clearly enunciates its horror and fantasy aspects, the series premiere is so riddled with serial-killer clichés that it makes us wonder about the nature of the monster(s) mentioned in the title. About two-thirds of the way into the episode, however, there is a big revelation that not only results in various life-altering decisions taken by the protagonist, Toni (Kaitlyn Dever) but also commemorates the show’s unmistakable plunge into the supernatural.

Using specific slices of Americana, ‘Monsterland’ explores some of the uncharted corners of speculative fiction, all the while maintaining the basic humanity of its characters. The series is based on the collection of short stories ‘North American Lake Monsters’ by Nathan Ballingrud, with episode 1 being the adaptation of ‘You Go Where It Takes You.’ SPOILERS AHEAD!

Titled ‘Port Fourchon, LA,’ after the town where the story is set, ‘Monsterland’ season 1 episode 1 revolves around Toni, a young mother who is struggling to make ends meet. She works as a waitress at a diner where food is so bad that even the staff has no problem openly admitting it. At home, her daughter, Jack, has these violent and increasingly regular episodes in which she screams and bites people and even chases other children with scissors. Her attempt to introduce Jack to her biological father ends horribly, with her battered and bruised, and Jack nearly drowned.

In flashbacks, we are shown the time of her pregnancy and how she contemplated abortion. She does not have access to the necessary meds, and her sole guardian, her grandmother, is deeply religious. Her friend tells her about another effective, albeit painful method. With a television blaring in the background with a pastor sermonizing about Jonah the Prophet, another teenage girl prepares to insert a large, medieval-esque device into her, but Toni ultimately opts out of the procedure because of the overwhelming pain. Back to present-day, troubled by all her issues, she wonders if she had made the correct decision all those years ago.

In the opening scenes of the episode, a schoolgirl is killed by the enigmatic drifter (Jonathan Tucker) we come to know as Alex. We are led to believe that he is the Blind Butcher, the serial killer about whom the other characters are learning on the news. He comes to the diner where Toni works for a meal and pays her $100 just to talk to her. All her life’s disillusionments have taught Toni to build a nigh-impenetrable wall around herself. In this instance, it helps her realize that something is definitely unconventional about the man sitting opposite her. With his dated facial hairstyle and eyewear, he appears every bit a serial killer. Their conversation is abruptly cut off when her temporary babysitter shows up at the diner with a screaming Jack.

But this is not the last time she will see him. Alex later gets her address from the other waitress and appears at her doorstep, amid a storm, asking for shelter for the night. Reluctant at first, Toni knows that she can’t decline the $1000 he is offering in return. When she sees the boxes marked with names of women in the trunk of his car, she becomes suspicious and weary and asks him about their content. Later, she surmises that he must be a fugitive and inquires about who he is running from. In neither instance, she gets an answer. The power cut adds to the dark and disturbing atmosphere of these scenes. Alex seems to have a connection with Jack, who is generally uncomfortable around men.

Driven by her loneliness and the memories of the disastrous evening with Jack’s father, Toni sheds her clothes and steps into the shower with Alex. They have sex, and afterward, while Alex is sleeping, she takes his keys and goes to investigate what is really inside those boxes. Before she can open one, Alex shows up. However, instead of attacking or even berating her, he encourages her to look inside a box. When she does, its content horrifies her. Alex pulls out a knife and skins his own face off, prompting Toni to lose consciousness.

The following morning, Alex can’t be seen anywhere. In his stead, there is a woman who refers to herself as Alice. She explains to Toni that she is wearing a synthetic skinsuit or an “alternative” that lets you “appropriate another physique and human experience.” She had been working with someone named “Mr. Grey,” who, according to her, is obsessed with humanity. Together, they have killed several people, the real Alex and Alice being two of them, but Mr. Grey’s appetite has no limit. After he kills and assumes the identity of a 15-year-old girl, Alex/Alice is finally forced to act.

The young girl we see Alex drown in the opening scenes is, in fact, Mr. Grey and not the girl herself. But Alice is not sure if she has really killed him and feels that she is being followed. When Toni asks why she doesn’t give the skinsuits back to him, she vehemently rejects the idea, stating that they have freed her from her previous life, in which she lived in a small town and had a bad job.

Accepting the Monster Within

It is likely that this parallel between Alex/Alice and Toni is what made them interested in her in the first place. Toni feels claustrophobic and trapped in her life as well, especially since becoming a mother when she was still a teenager. When Jack started showing her violent tendencies, things only got worse. She can barely keep the lights on at her home, so she can’t even contemplate getting her daughter the much-needed psychiatric help. Throughout the episode, she reminiscences a couple of times about riding a bicycle, which seems to be her only happy memory from recent years.

After Alex/Alice departs, Toni leaves the town as well with her daughter and the thousand dollars from earlier. She tells Jack that they will have new names and new lives from now on. During a stop at a roadside diner, she introduces herself as a nurse from Denver to a fellow patron, explaining in detail how her daughter loves to play in the snow. But her carefully-and-intricately spun illusion is shredded when Jack starts having one of her episodes.

Back in her car, Toni comes to a startling realization. She will not be truly free while she has Jack and all the responsibilities of being a mother to a troubled child. She makes a decision that bounds to have a lifelong effect on both her and her daughter. She takes a sleeping Jack from her car and puts her inside a stranger’s, leaving the $1000 with her. The closing scenes focus on Toni’s face, as a smile of relief slowly replaces the tears of grief.

As Alex/Alice told her earlier, “Sometimes, you have to live with what you have done in order to live.” Toni commits such a profoundly disturbing act, so she can pursue her own happiness and have a fresh start to her life. It’s incredibly selfish as well as remarkably human. That is essentially the premise of the entire series, that anyone can be a monster, provided the fitting circumstances.