Mural Painter on Shark Tank: Everything We Know 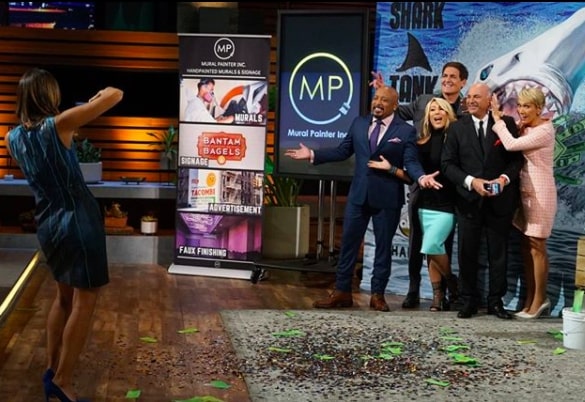 ABC’s ‘Shark Tank’ has been bagging deals after deals for 11 seasons now. The show that started in 2009, has been iconic in setting itself apart on a model inspired by ‘Dragon’s Den’. Though the panelists are not famous for their kind words, their smart eye for potentially good business has managed to grasp its viewer base.

The show has been the route to fame for several aspiring business models that have started small. It has also given due recognition to brands that may have not cut a deal but have certainly gotten the viewer’s attention. After all, in a reality show, fame and recognition can come in many forms.

Mural Painter: Who Are They?

Emily Strauss founded the company with an aim to take art to corporate heights. The company advertises its client brands through mural paintings often painted on the outside of a building. The company was originally called ‘Design Team NYC’. It operates by cutting contract deals with client companies to create indoor and outdoor mural paintings for them. The company has its branches in NewYork, Austin, and Chicago.

Mural Painter: What Do They Do?

They have three definite processes through which they put a business contract into action. First, the clients are required to submit a potential design or idea, which is then further designed and crafted into a plan by ‘Mural Painter’. The last step involves putting it into action by painting them. The prices of the mural painting depend on the size of the artwork. One can only imagine the extensive work that goes behind a mural that spans over several storeys of a building. The company has a team of expert project managers and artists to conduct their business.

All the murals are hand-painted to perfection and does an elaborate job. Their company website has a portfolio of all the murals they have worked on. These range from interior wall murals to exterior building walls that span over ten floors. The company hosts several mural events that aim to attract more clients and create awareness about the scope of such a business.

The company is also quite active on their social media. They are vocal with their business on Instagram, Facebook, and Twitter. Their clients include some popular brands like Taco Bell, Hershey, FX, Warner Bros, WeWork, Google, and Nike. Taco Bell has even given a testimonial for their work on their website that goes:

“ You guys did a FANTASTIC job. The client is very happy. Thanks for moving things around for us to get this up so quickly.”

The company has not only extended its doors to the corporate but also smaller projects that people may have in mind like a wall of a house. If the client demands such a service, then an artist can be hired on a day’s basis. Check out their video below: