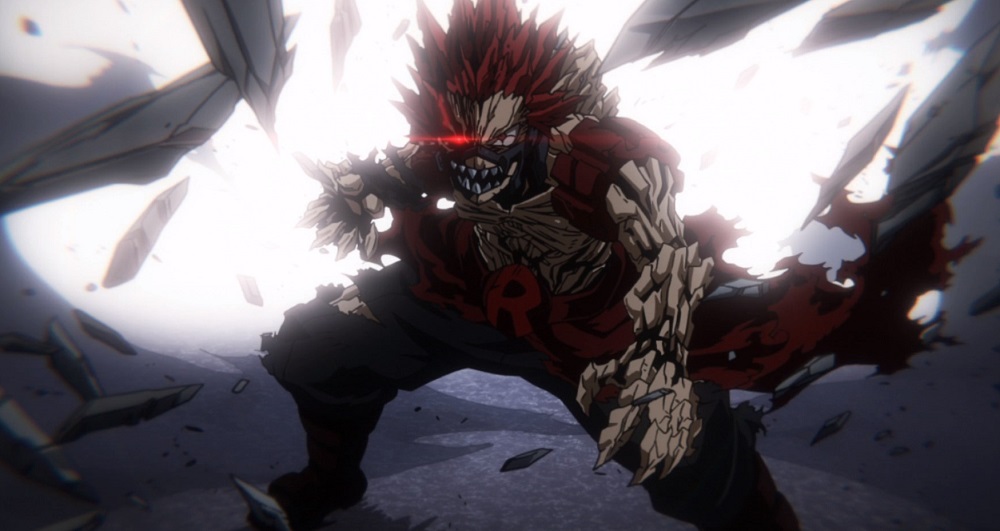 A few seconds in and I was almost starting to wonder if I’m watching the right anime or not. If you’ve seen any of the previous seasons of ‘My Hero Academia’, at this point, you know exactly what to expect from this show. So far, at least till episode 4, the animation quality was certainly as good as the previous seasons but there was nothing exceptional about it. But episode 5, right off the bat, starts off with some out-of-this-world visuals that prepare you for all the other glorious action scenes that follow.

Undoubtedly, Episode 5 is the best episode of this season so far, not just because of its opulent production value but also because of how it treats its characters.

Two giants from opposing villain groups brutally fight one another, and while they’re at it, they don’t bother worrying about the collateral damage that they’re causing. Worried cops call out for heroes who are the ones who can stop them. This is when Nejire Hado, a third-year student at the U.A, steps forward and lashes out on the monsters with her quirk. She is soon accompanied by two first-year heroes, Uravity and Froppy, who use their unique quirks to tame the beasts. Soon, peace is restored as the heroes are effortlessly able to overpower the villains. Turns out that all three girls are actually working under Rank 9 Dragoon Hero Ryukyu. After the battle, Uravity and Froppy gratefully thank her for giving them the opportunity to work with her and she tells them about how they might later even get to work with other heroes.

In the meantime, Tamaki and Kirishima roam around the streets with their mentor, Fat Gum, to make sure that everything is in conformity with the law. While Fat Gum, as always, goes on feasting on some snacks, Kirishima expresses how he’s really having a ball working with him. That’s when they spot some friction between two small-time criminal groups and they rush to the scene to bring things under control. Tamaki uses his unique quirk and octopus tentacles to come flying out of the tip of his fingers. He then uses this to beat the hell out of some of the bad guys while Fat Gum just uses squishy globulus body to defeat them. With awe, Kirishima just admires the two heroes from a distance.

Once they are done defeating the gangsters, a man from the onlookers takes out a gun and fires right at Tamaki. Raged by this, Kirishima chases him down and corners him at the end of a street. Tamaki ends up losing control over his quirk after being shot at. Meanwhile, Kirishima tries to teach the man a lesson, but to his surprise, after shooting up a quirk-enhancing drug, huge metallic blades spring out of his body and even Kirishima’s hardening quirk is not able to stop him. This is when Kirishima starts looking back at his past and one defining memory unleashes his true form—”The Unbreakable Red Riot”. With this, he is easily able to overpower the bad guy and also ends up saving the lives of many innocents around him.

Back at the academy, while young heroes celebrate their work-study wins and also boast about how they defeated villains, Deku still struggles to forget about his first meeting with Eri.

What does it truly mean to be a superhero? While some might say that it’s all about wearing a cape and looking good while saving the lives of others, being a hero is a lot more than that. “It’s all about not willing to fall.” That’s what this episode is all about. Instead of focusing on Deku this time, the episode brings light on the work-study of the other first years at the academy. Emphasizing on Kirishima’s character, it shows how freakishly strong he can become when he is able to truly push himself beyond his transcendent limit. Kirishima, after becoming “The Unbreakable Red Riot”, proves it to himself that he is no less of a superhero than anyone else around him, and for once, he is able to make a name for himself without being under Bakugou’s shadow.

Apart from that, Episode 6 also shows how, unlike the villainous antics of all small criminal groups, Overhaul is planning something much bigger. The quirk enhancing and diminishing drugs make the entire storyline a lot more scalable. We can only imagine how these drugs will further be able to bring out the best, or should I say worst, in the heroes and villains. Moreover, though Deku plays a very small role in this one, it seems like he is still struggling with the demons of his past and is desperately seeking an opportunity to prove himself. Eri’s character still comes off as a mystery but her future relationship with Deku is starting to become quite apparent.

More than anything else, it’s the impressive action scenes of Episode 5 that completely blow you away. Studio Bones is just raising its standards with each episode and it’s also quite surprising to see how the animation style of this anime is starting to look a lot like that of the original manga. From the opening scene where the two giants raise havoc on the city to Red Riot’s outrageous transformation, the action scenes of this episode were almost in par with that of ‘Attack on Titan‘. Hopefully, we’ll get to see more of these in the future.