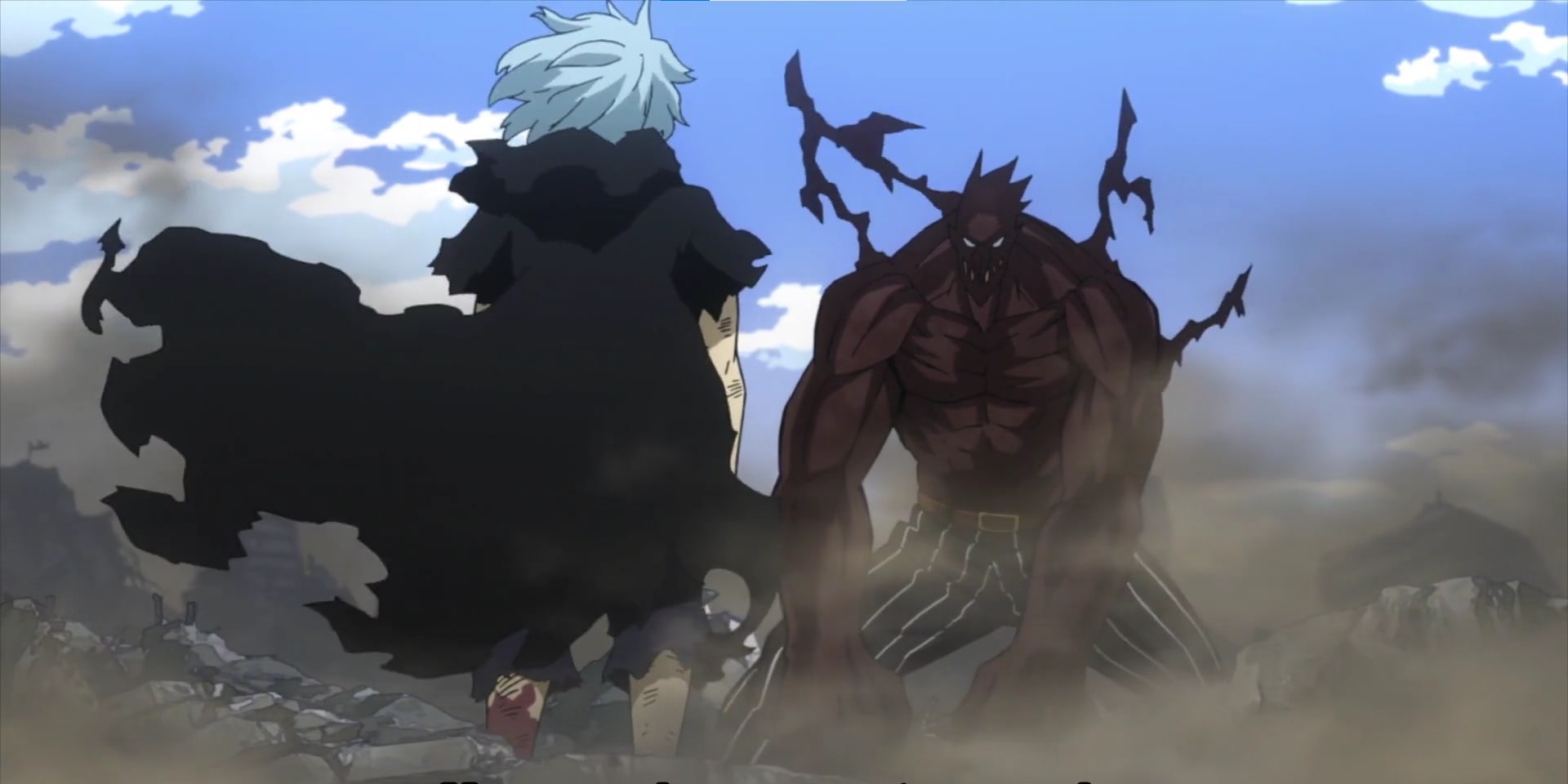 In the penultimate episode of the fifth season of ‘My Hero Academia,’ the Revival Celebration of the Meta Liberation Army comes to a sensational end. Tomura Shigaraki receives his name in the past, and he embraces his true self in the present. Re-Destro learns his place in the grand schemes of things, and both the MLA and the League are reborn as something fundamentally different. Here is everything you need to know about the ending of ‘My Hero Academia’ Season 5 Episode 24. SPOILERS AHEAD.

The 24th episode, titled ‘Tomura Shigaraki: Origin,’ begins by continuing with the story of Tomura’s childhood, when he was still known as Tenko Shimura. As his memories start to return to him, the adult Tomura remembers walking on the streets after killing his family and people recoiling from him. He wonders what would have happened if someone had reached out to him, be it a pro-hero or a civilian.

Ultimately, it’s All For One who extended his hand to Tenko and took him back to his headquarters. There, he convinced Tenko that his ability was not a bad thing. The supervillain told the young boy that the latter had to use his power because his urge to destroy things was much stronger than him. If he didn’t let it out, it would continue to overflow his body and show up as an itch. Following his suggestion, Tenko killed two delinquents who had tormented him when he was living on the street. Later, All For One gave him the hands of his latest victims as gifts to celebrate his rebirth. When Tenko appeared before his mentor wearing all the hands, the latter gave him a new name, Tomura Shigaraki. With Shigaraki being his own family name, All For One effectively makes the young boy his successor.

In the present, Tomura has finally remembered everything. He killed his father because he wanted to, and the deaths of his mother and the others made his heart lighter. It was destruction for destruction’s sake. He tells Re-Destro, for whom future and destiny of blood are arguably the two most important things, that future is immaterial as he takes his father’s hand off his face and destroys it. While those hands always made him sick, they brought him a sense of calmness. Now, for the first time, he feels that he doesn’t need them. Meanwhile, Gigantomachia rushes toward Tomura while shouting, “Master’s successor.”

My Hero Academia Season 5 Episode 24 Ending: Who Wins the Leaders’ Fight? Why Does Re-Destro Amputate His Legs?

Tomura eventually wins the fight between himself and Re-Destro. When Re-Destro increases his Stress Quirk to 100% and tries to attack Tomura, the latter easily blocks it, but the resulting explosion destroys a part of the city. For Re-Destro, his Quirk has always been a means to an end. He wants to actualize Destro’s vision of society and uses his powers to that effect. Initially, he has a hard time understanding Tomura, who wants to destroy everything.

However, as their fight continues, Re-Destro realizes that Tomura represents the ultimate goal of Destro’s ideology, which is complete liberation. As he recognizes this, he subconsciously starts to feel joy and happiness, which recedes the potency of his Quirk. So, he puts on Claustro, the Detnerat-Patented Burden-Amplifying Steel Pressure Mechanism, which increases his stress level to 150%. But having undergone suffering and reawakening, Tomura partially destroys the suit of armor. And then he touches the earth, and everything around him obliterates. The decay affects Re-Destro’s legs, and he is forced to amputate them to save himself.

Afterward, as Trumpets uses Incite to order the remaining MLA members to attack Tomura, the leader of the League of Villains instills pure fear in their hearts with one look, nullifying the Quirk’s effects. Re-Destro realizes that fighting beyond this point will only result in pointless deaths and kneels before Tomura. As everyone, including Gigantomachia, silently watches, Re-Destro declares Tomura as the new leader of the MLA.

Why Don’t the Pro-Heroes Know about Deika City? What Is the Paranormal Liberation Front?

One week after the Revival Celebration reports carefully edited and changed by Skeptic and his puppets convince people and pro-heroes alike that an attack by a group of villains was the cause of the Deika City disaster. According to the reports, the civilians rose up against the villains and took them down with the help of the pro-heroes. Several residents and all the villains died during the battle. Rikiya Yotsubashi or Re-Destro, the CEO of the Detnerat Company, was in the city at the time and suffered severe injuries. His legs had to be amputated.

Tomura’s victory over Re-Destro grants him access to vast wealth and influence. In an event attended by many members of the group formerly known as the MLA, Re-Destro officially recognizes Tomura as the grand commander of the MLA. The League and the MLA subsequently merge under Tomura’s leadership, becoming the Paranormal Liberation Army, a name that Re-Destro and Spinner came up together.

Tomura then proceeds to announce Twice, Himiko, Spinner, Dabi, Mr. Compress, Re-Destro, Skeptic, Geten, and Trumpet as his lieutenants. He also declares that the PLA will seek to reject the concept of “villain” and expand the interpretations of the meta-framework. It’s a new day in the ‘My Hero Academia’ universe. The League has been reborn as a political entity.