Tournament arcs are quite common in anime. The general belief is that the creators use them as fillers, especially when they have written themselves to a corner. And that is true to a degree, but in an anime like ‘My Hero Academia,’ which uses them quite often, they are legitimate plot devices that take the story forward. In season 5, the Joint Training Arc provides the audience a moment to reminiscence about what the anime is truly about before it makes its inevitable turn towards darker directions.

In episode 9 — titled ‘Early Bird!’ — match 4 begins between Katsuki Bakugou, Kyouka Jirou, Hanta Sero, and Rikidou Satou of Class 1-A and Setsuna Tokage, Yousetsu Awase, Kojirou Bondo, and Togaru Kamakiri of Class 1-B. The match ends in less than 5 minutes, with Bakugou’s team scoring a flawless victory. The next and the last match of the session subsequently begins, with Midoriya on one side and Shinsou on the other. Here is everything you need to know about the ‘My Hero Academia’ season 5 episode 9 ending. SPOILERS AHEAD.

The other three members of the Class 1-A team are unsure about Bakugou’s plan, but he tells them to shut up. Internally, he asks Midoriya to watch him. The Class 1-B team reflects how balanced the opponent team is, so they decide to bring the battle to them. Vlad King is as boisterous about his students as ever and equally biased. He declares that while the two teams are now tied, Class 1-A only won the first match because of Shinsou. Denki and some of the other Class 1-A students protest against this, but Aizawa reminds them that they wouldn’t say the same thing if this were a real fight. 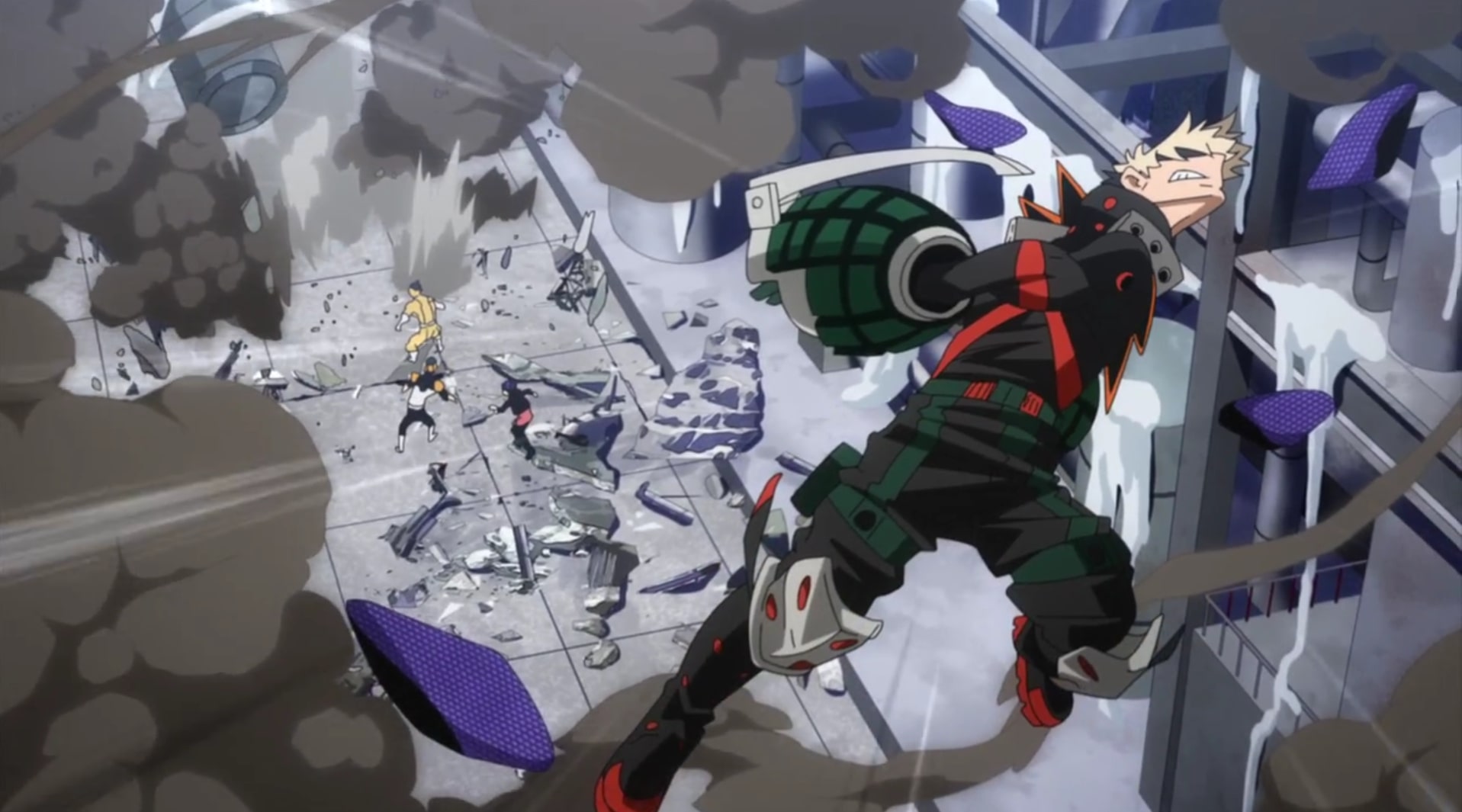 Bakugou’s plan involves him taking the lead and going upward while the others follow him. The others question this plan. They want to make full use of Jirou’s Earphone Jack Quirk and counterattack. Knowing that this is what the opponent team is likely expecting, Bakugou convinces his team to follow his plan. He is as condescending and brash as ever. And his ultimate goal to become a hero even greater than All Might hasn’t changed. But he has learned the value of cooperation. The Class 1-A team puts on a dominating performance and wins the match 4-0. The episode ends as the teams get ready for the 5th and final match. This time, it’s the Class 1-B team which will have five members.

My Hero Academia Season 5 Episode 9 Ending: How Does Bakugou’s Team Secure Such a Flawless Victory?

Like Midoriya, Bakugou has grown up idolizing All Might. However, his idea of heroism vastly differs from Midoriya’s. Bakugou highly values winning and earnestly believes that heroism and the ability to win are inherently the same. This belief serves as the foundation of who he is. During match 4 of the joint-training session, he tells his team that he will save them and asks them to do the same for him. Clearly, he has matured a lot and has finally started to understand the value of teamwork.

At one point, Jirou and Hanta are nearly taken out when Kojirou traps them with his Cemedine Quirk, and Kamakiri drops large pieces of pipes on them after slicing them up with his Razor Sharp Quirk. Rikidou decides to sacrifice himself for his teammates. But before he can intervene, Bakugou arrives and destroys both the pipes and the glue. Later, Rikidou uses his Sugar Rush Quirk to free Bakugou from a trap created by Yousetsu.

Hanta and Jirou capture Yousetsu, while Rikidou does the same to Kojirou. Bakugou subsequently takes out Kamakiri. This leaves Setsuna as the only member of the Class 1-B team still active in the combat zone. She still can’t believe how much Bakugou has changed. They thought that Bakugou would act on his own as ever, and his team would be forced to follow him. Setsuna wanted to find an opening in that makeshift dynamic and exploit it.

When that plan proves to be unfeasible, she fails to come up with a backup plan. This also serves as a contributing factor for her team’s defeat. As Vlad King later points out to them, unlike Honenuki, she is not fluid with her tactics, and that ends up costing her team the match. Hanta figures out how Setsuna’s Quirk works and pushes her toward Bakugou, who defeats the remaining member of the Class 1-B team with a Zero Distance Stun Grenade.

Why is Midoriya’s Team Worried About Him?

In match 5, Izuku Midoriya, Ochako Uraraka, Mina Ashido, and Minoru Mineta of Class 1-A is set to take on Neito Monoma, Yui Kodai, Reiko Yanagi, and Nirengeki Shouda of Class 1-B. In match 1, Shinsou was part of the Class 1-A team. This time, he goes into the combat zone as part of the Class 1-B team. Midoriya’s teammates are worried about him as his Quirk has been acting up lately. But he assures them that it is working fine now. After what happened in match 4, Midoriya knows that their opponents will especially target him and starts to plan accordingly. 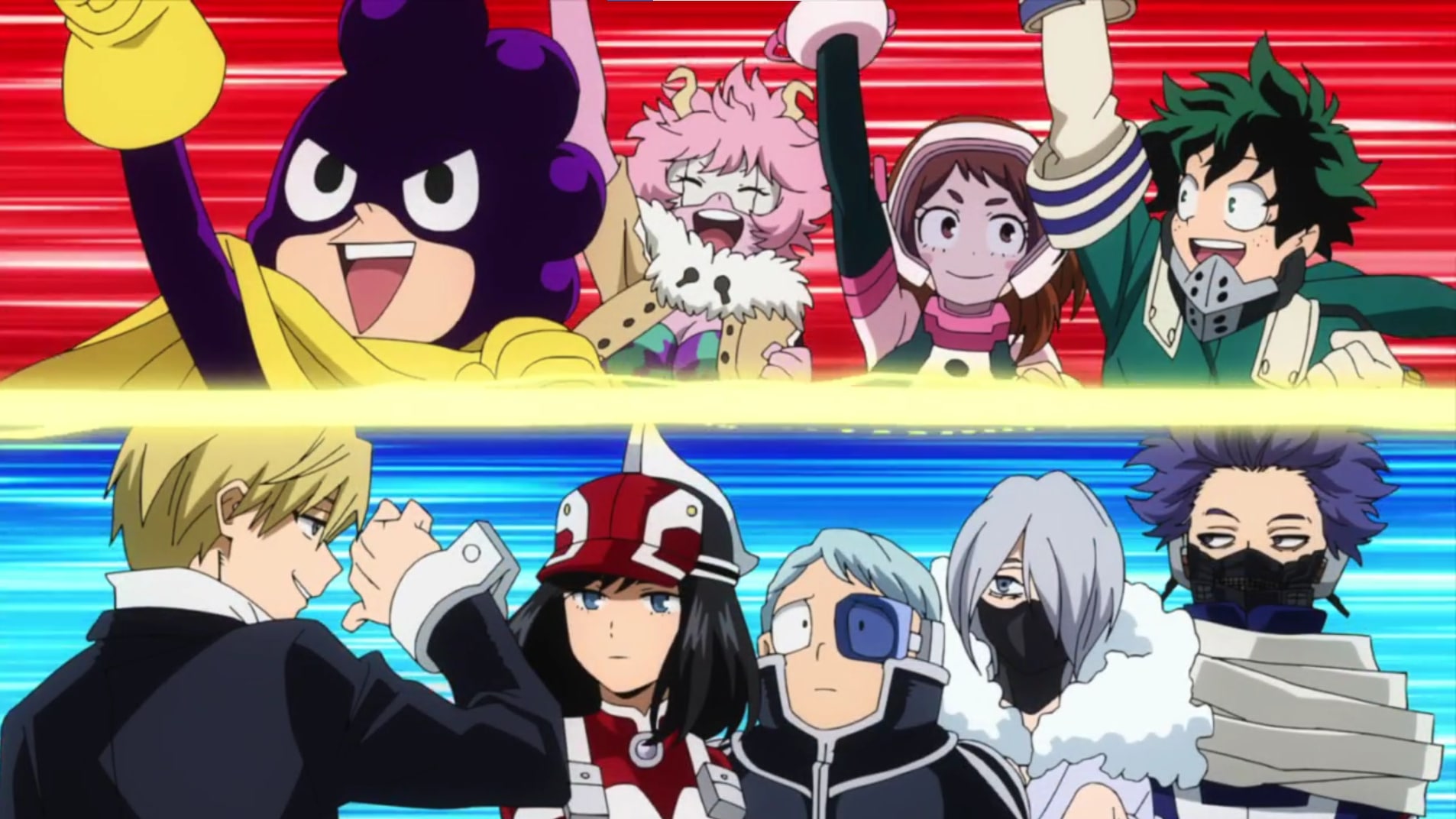 He and his teammates know it’s not just Shinsou that they have to be worried about; Neito is an extremely powerful opponent as well with his Copy Quirk. Midoriya draws inspiration from his conversation with Bakugou after match 4. The latter taunted him that he (Bakugou) was leaving him behind. Midoriya’s optimism quickly spreads among his teammates, who have been afraid that they are drastically outmatched, and uplifts their spirits.