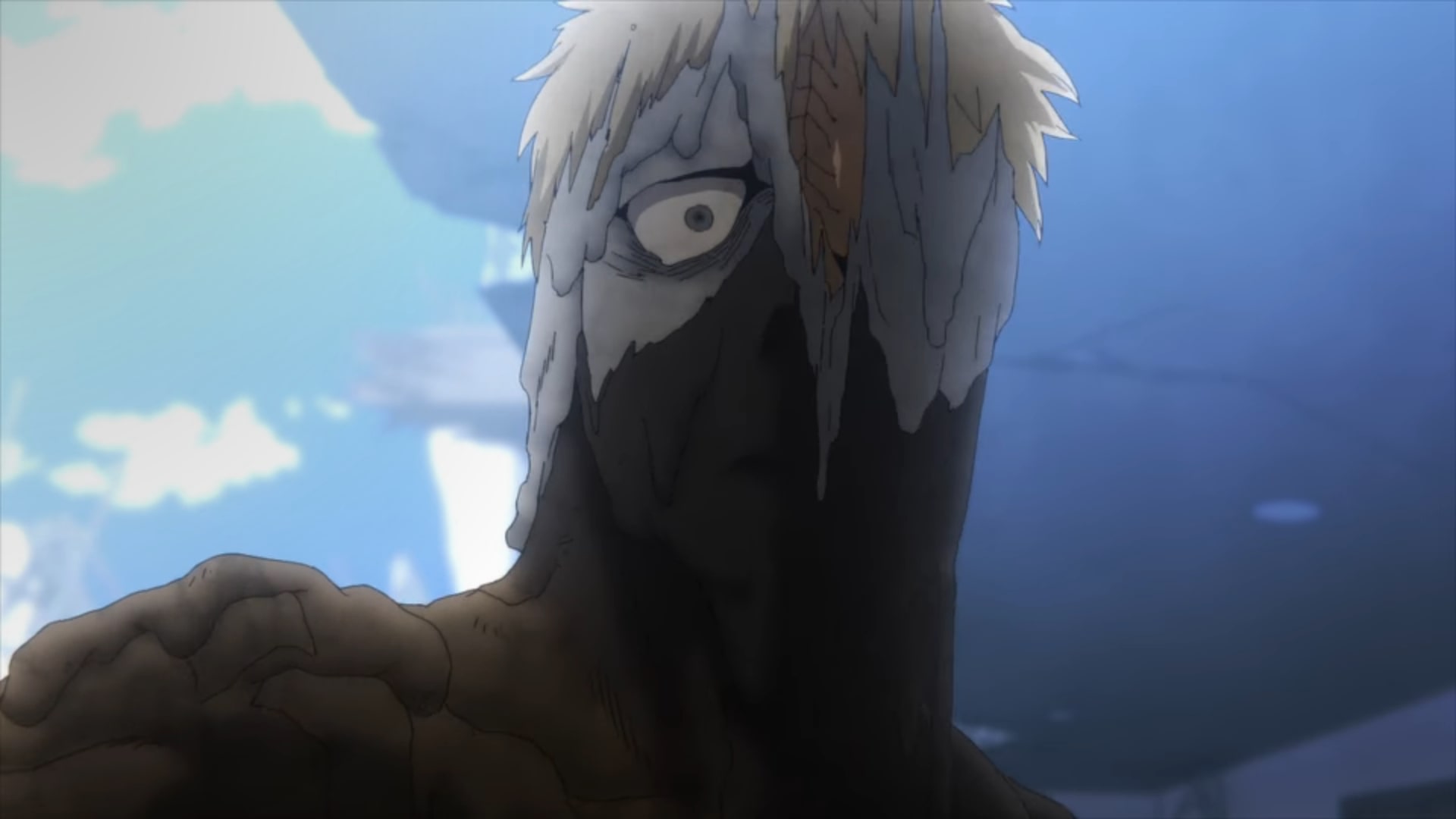 In the third episode of ‘My Hero Academia’ season 6 titled ‘One’s Justice,’ the heroes manage to destroy much of Gunga Mountain Villa and seal all passages connecting outside- surrounding the villains from all directions. Meanwhile, Twice finally learns that Hawks has been leaking crucial intel, which made the ambush on the Paranormal Liberation Front’s secret hideout possible. Here is everything you need to know about the ending of ‘My Hero Academia’ season 6 episode 3. SPOILERS AHEAD!

Kamimari absorbs and in turn redirects all the current unleashed by the unnamed PLF commander’s Supreme Discharge Thundernet attack. The long-range power could potentially have been very dangerous but Kamimari saves the day and gives the heroes the opening to continue the ambush. Soon, half of the Gunga Mountain Villa is destroyed while the passages connecting outside are effectively sealed- cornering the villains. Oblivious to all this, Re-Destro waits for the arrival of Mr. Skeptic’s regiment for the meeting. 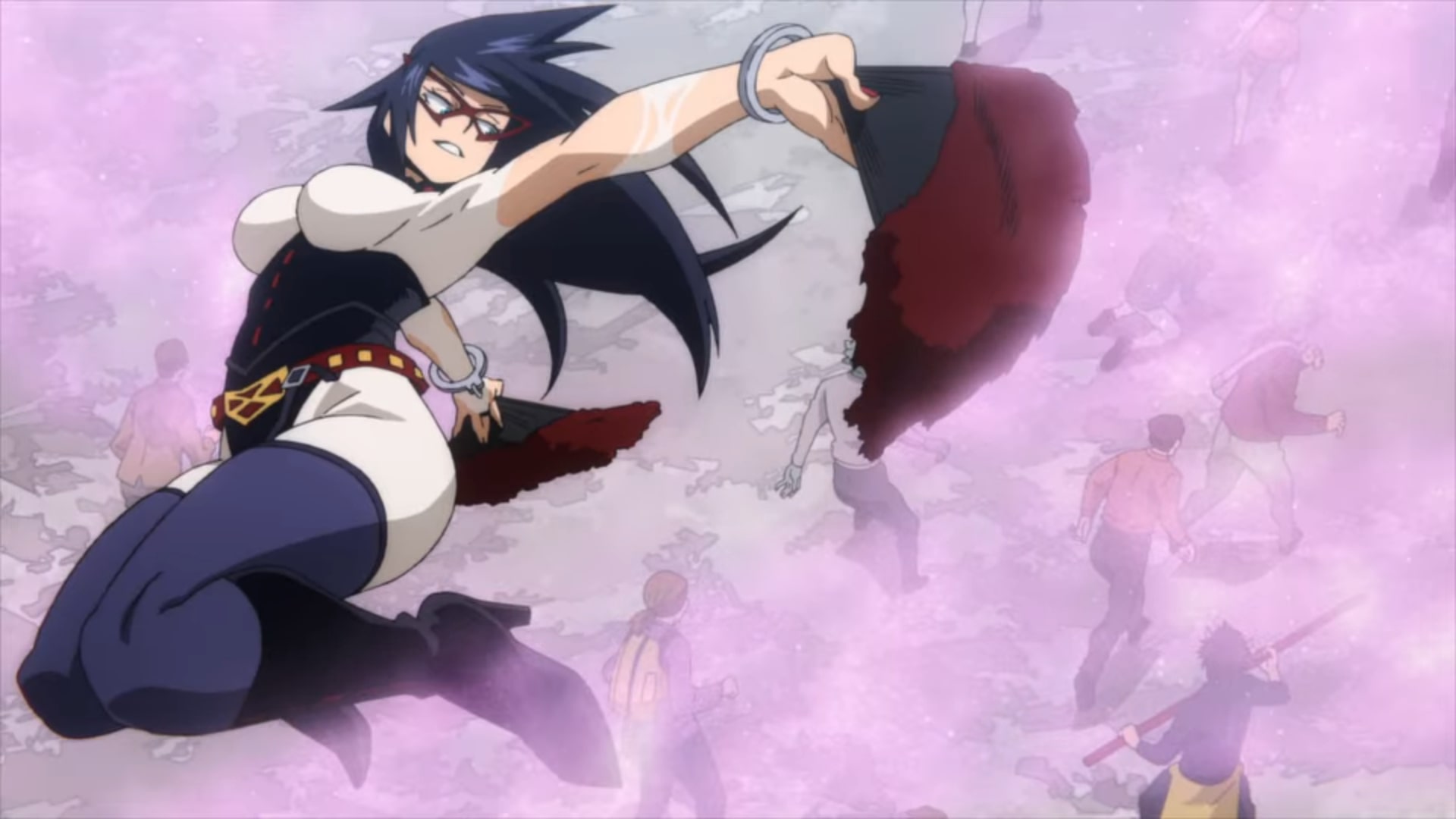 One villain suddenly rushes in calling Re-Desto’s name with a distressed look on his face. As soon as he can catch his breath, the villain explains that countless heroes have ambushed the villa. He goes on to explain that they have not only managed to destroy half of the villa but the exits are also sealed. Meanwhile, the unnamed PLF commander fighting outside decides to use many million volts of current against Kamimari. But moments before he could do it, Shinya Kamihara uses the Thousand Sheet Pierce attack to open a small hole in his lung, which effectively incapacitates the villain.

Midnight then takes it over from there and uses her Somnambulist Quirk to put the villain around her to sleep. Meanwhile, Hawks has managed to successfully restrain Jin Bubaigawara (Double). While the villain is shocked by the betrayal, the Pro-Hero tries to explain to him that he will be handed out to the police. Hawks try to argue that he still has a chance to leave his criminal past behind with the Pro-Hero’s help.

Unfortunately, Jin is least interested in Hawks’ offer and is instead disappointed that he let his friends down again. Jin recalls how Magne died after he brought Overhaul to their base and it seemed like history was repeating itself now. Outside the villa, Fatgum explains to Fumikage that there are passages inside the premise that are not sealed right now, so they must be closed as soon as possible. While Suneater fights the villains, Fatgum immediately takes his place at one of those entrances and Tokoyami goes inside to use Ragnarök to seal the super-long passage. 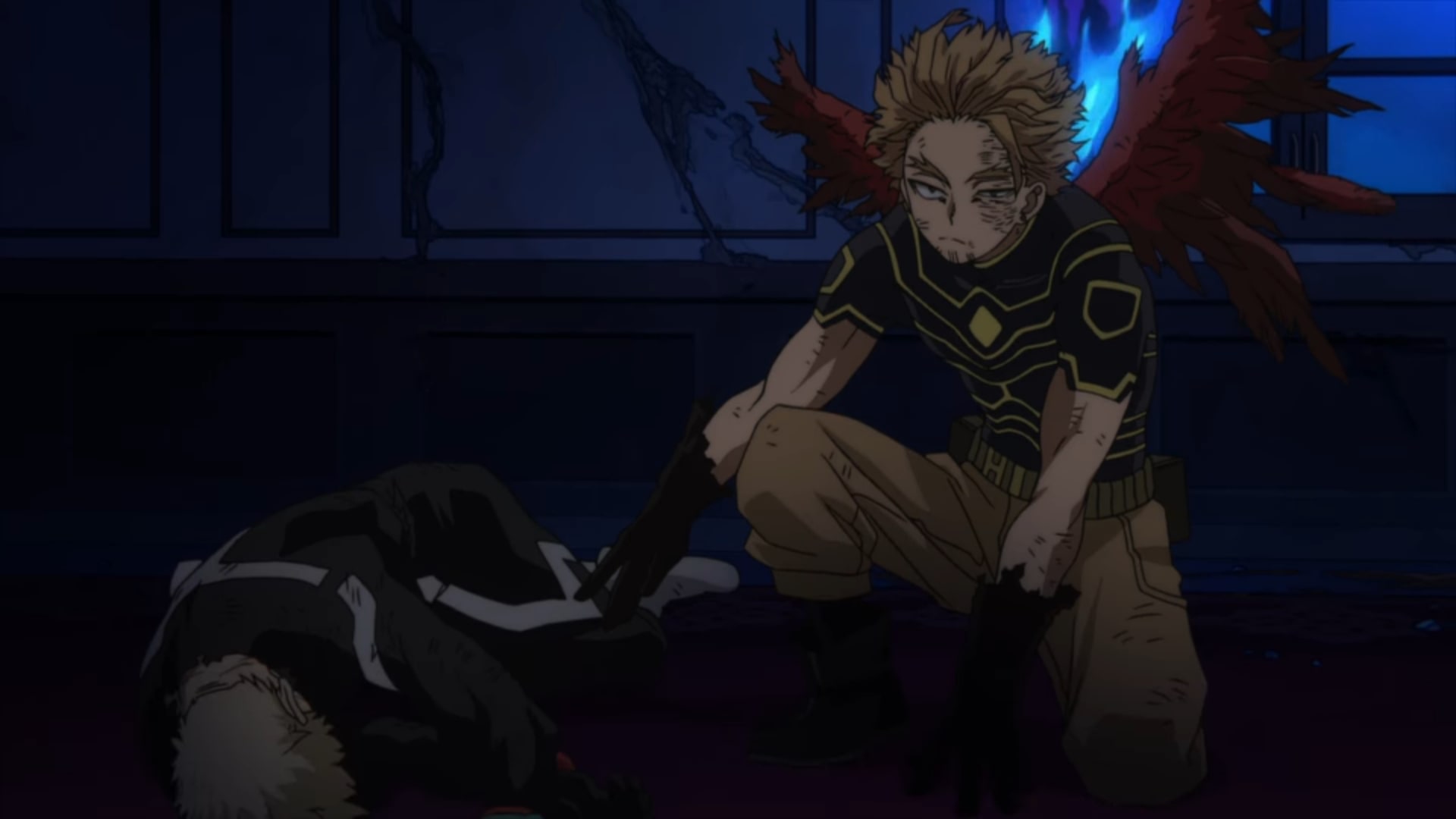 Although Re-Destro tries to stop him, Ragnarök manages to invade the secret passage and reports back to Fumikage that there is a dangerous monster with the villains. Luckily, none of the villains inside the facility are expected to fight back until they get orders from their leader, who is luckily taking a nap right now.

After learning that he has been betrayed again, Jin becomes furious and is determined not to accept his arrest as Hawks has suggested. He uses his Twice Quirk to make multiple duplicates of himself, hoping to overwhelm the Pro-Hero. Unfortunately, Hawks is too powerful, and using his feathers, he starts destroying one clone after another. He knows that Jin is not going to give up now, which means that he would have to kill him. When Jin springs toward Hawks with the hope to surprise the hero and take him down. 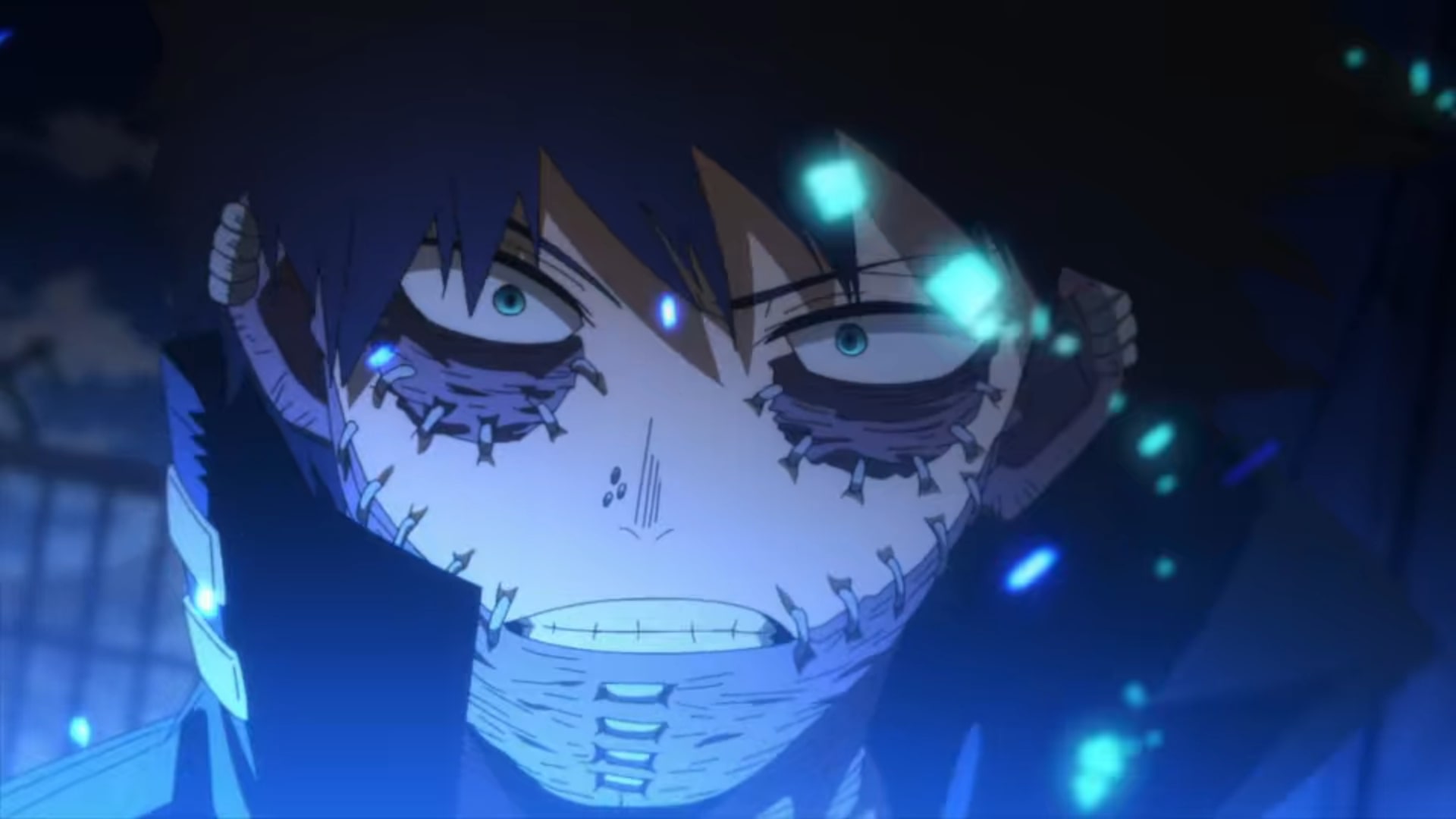 However, Hawks is too quick for him and easily strikes the villain again. As Twice falls to the ground, the Pro Hero climbs on his chest and is about to kill him. Luckily for Jin, Dabi has overheard everything and was waiting for the right opportunity to attack. He suddenly enters the hall and unleashes his flames injuring Hawks. But the harm is nothing compared to what happens when Dabi uses his powers again and the Pro Hero loses almost half of one of his red wings. Dabi confesses that unlike Twice he never trusted Hawks from the start.

Meanwhile, the Pro Hero mentally calculates all the possibilities. He feels that Jin is too injured to move, but out of nowhere, the villain makes a duplicate that restrains the hero. As Twice distances himself from the Pro Hero, Dabi uses the opportunity to attack Hawks, who is pushed out of the villa through the window. But it turns out, the Pro Heroes using his superior speed manages to go all the way around and enter the hall again through the door. Dabi tries to attack him again with his flames but Hawks manages to save himself this time. 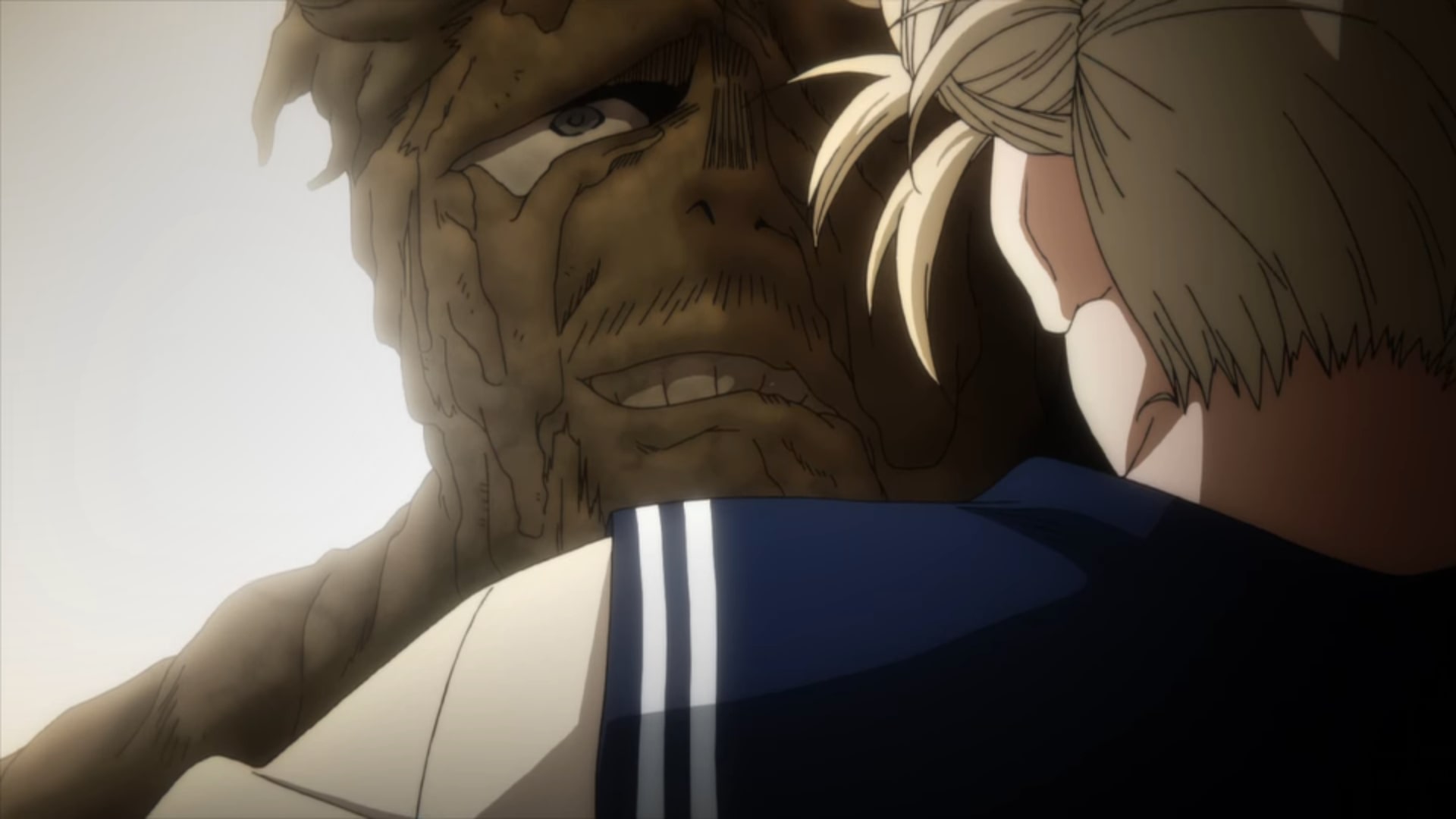 Meanwhile, Twice is in terrible shape, but still determined to continue fighting. When a hero catches Mr. Compress and Himiko, Jin stabs him in the neck multiple times, killing him on the spot. However, for some strange reason, his body begins to melt, revealing that he was just a duplicate. It turns out that Jin has passed away due to his injuries and in his last moments, the duplicate expresses gratitude for the life he has had and everything that the villains have done for him.