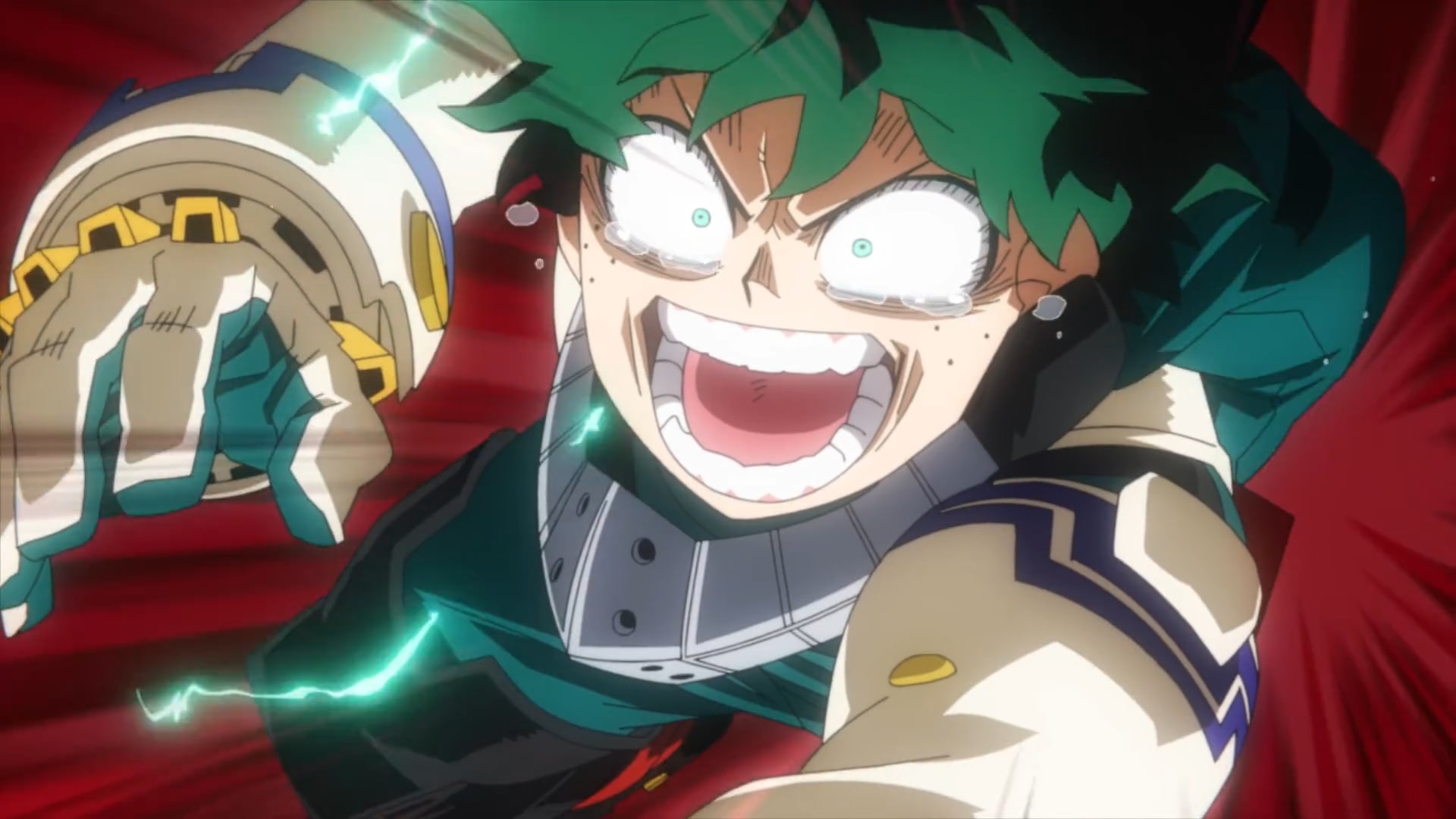 In the eighth episode of ‘My Hero Academia’ season 6 titled ‘League of Villains vs. U.A. Students,’ Gigantomachia continues to rush towards Jaku City with the original members of League of Villains on his back. However, students of the U.A. High School refuse to run to safety and prepare to take down the giant villain under Momo Yaoyorozu’s leadership. In the meantime, Deku with others tries to restrain Tomura who has a sinister idea up his sleeve. Here is everything you need to know about the ending of ‘My Hero Academia’ season 6 episode 8. SPOILERS AHEAD!

As the Pro Heroes fail miserably to stop Gigantomachia, the responsibility of taking him down falls on the shoulders of the U.A. High students. Instead of turning their backs and running away, which they could have, the young heroes decide to take down the giant villain themselves despite knowing the risks involved. When Gigatomachia finally reaches them, they manage to make him fall to his knees and even use explosives effectively to break his seemingly unstoppable run toward Jaku City. 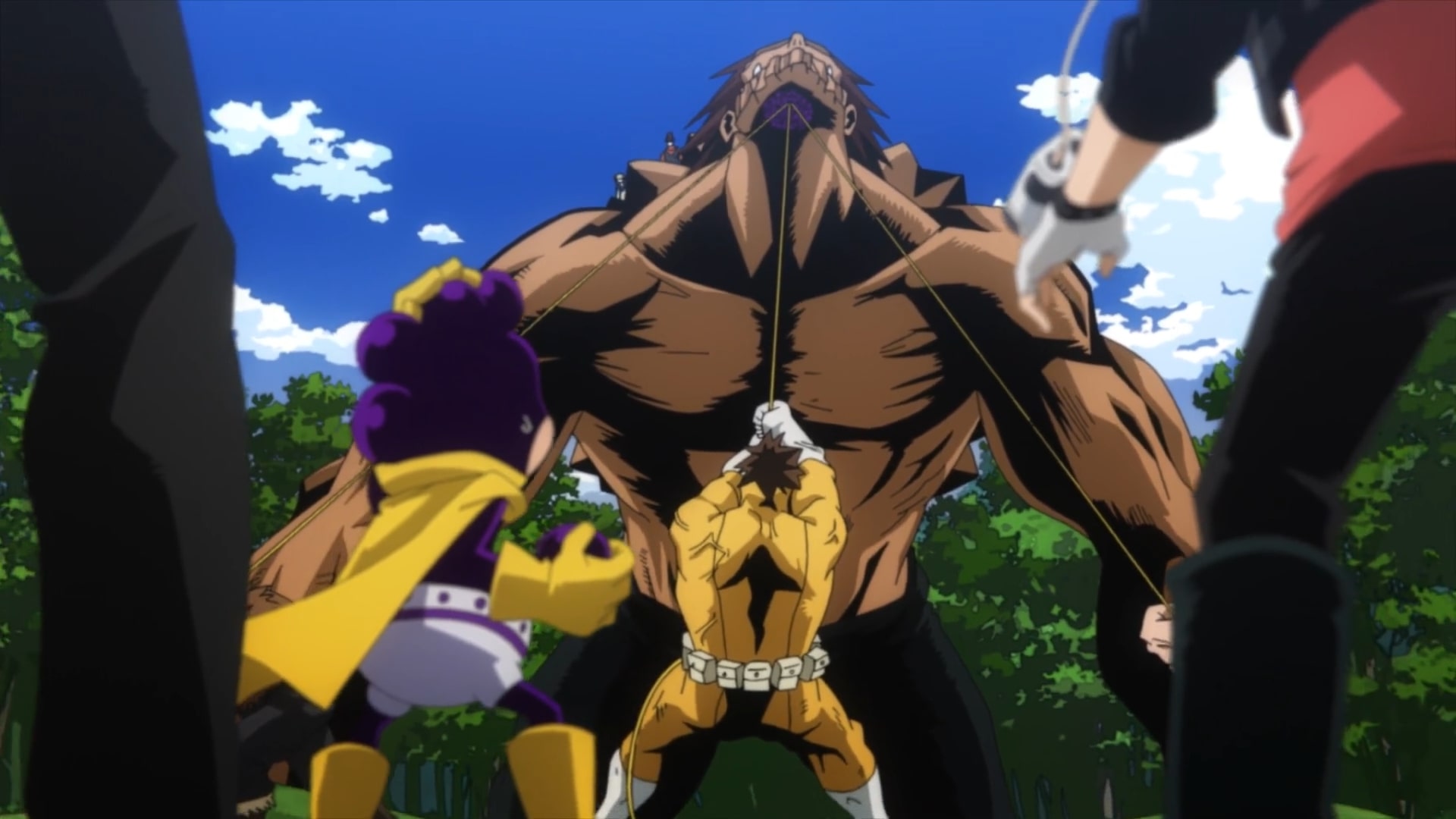 Unfortunately, the original members of the League of Villains who are on Gigatomachia’s back show no mercy and their counterattack is devastating. Moments before that, the students have tried but failed miserably to put sedatives in Gigatomanchia’s mouth to put him to sleep. In the meantime, the struggle continues in Jaku City with Tomura injured but unwilling to give up. He tells the Heroes that they turn a blind eye to their own families and hurt them to save others.

Shigaraki mocks their intentions and argues that people like him who were cast out by the Hero society and left to rot have now emerged to destroy the very system that never cared for them. His short speech gives Endeavor some time to regroup and without paying any attention to his words, he unleashes a blast of fire to attack the villain.

As Mina is about to fling the sedative in Gigantomachia’s mouth, she recalls their previous encounter when she was just a middle schooler. That memory shakes up her resolve momentarily and she ends up losing the grip on the canister in her hand. In the meantime, Gigantomachia manages to fling Midnight from his back and is about to crush Mina when Kirishima pushes her away. Tetsutetsu takes her to safety while the Red Riot confidently rushes for the attack. 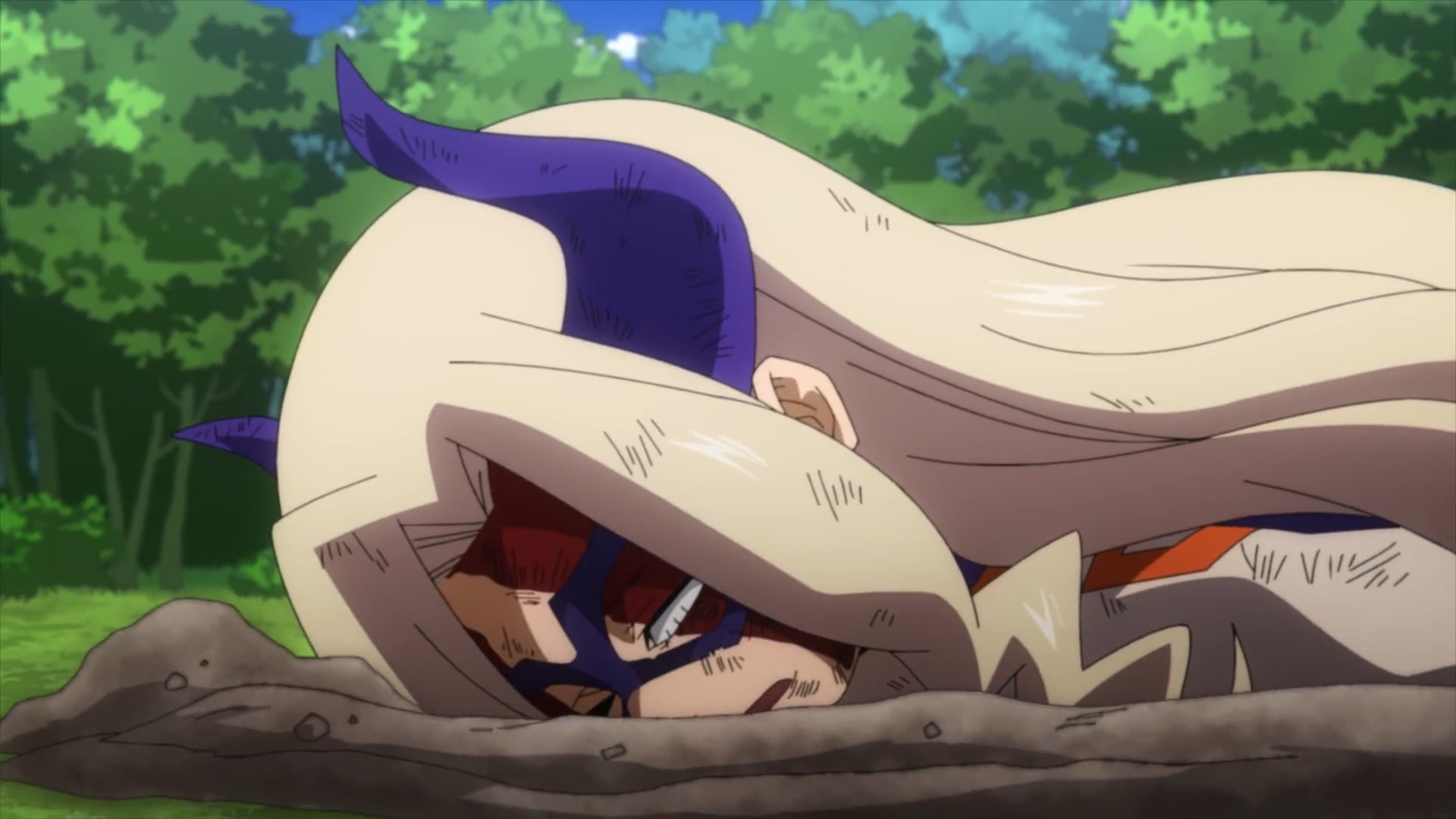 Although Himiko breaks the canister in Kirishima’s hand, it turns out that he caught Mina’s bottle of the sedative as he pushed her out of harm’s way and throws it in Gigantomachia’s mouth. Once the job is done, Kirishima escapes unharmed thanks to Setsuna who comes to help him at the right time. Although Midnight was thrown violently to the side by Gigantomachia it turns out that she only lost consciousness and is not dead.

Does Gran Torino Die? Does Aizawa Lose His Quirk?

As Tomura jumps and manages to emerge largely unscathed by Endeavor’s blast of fire, he appears to be heading toward the Pro Heroes’ direction. However, Gran Torino uses this opportunity to land a dropkick on his back and Shigaraki falls face first on the ground. He tries to jump away to create some distance from the villain but Tomura grabs his leg and crushes it before slamming the Pro Hero on the ground. 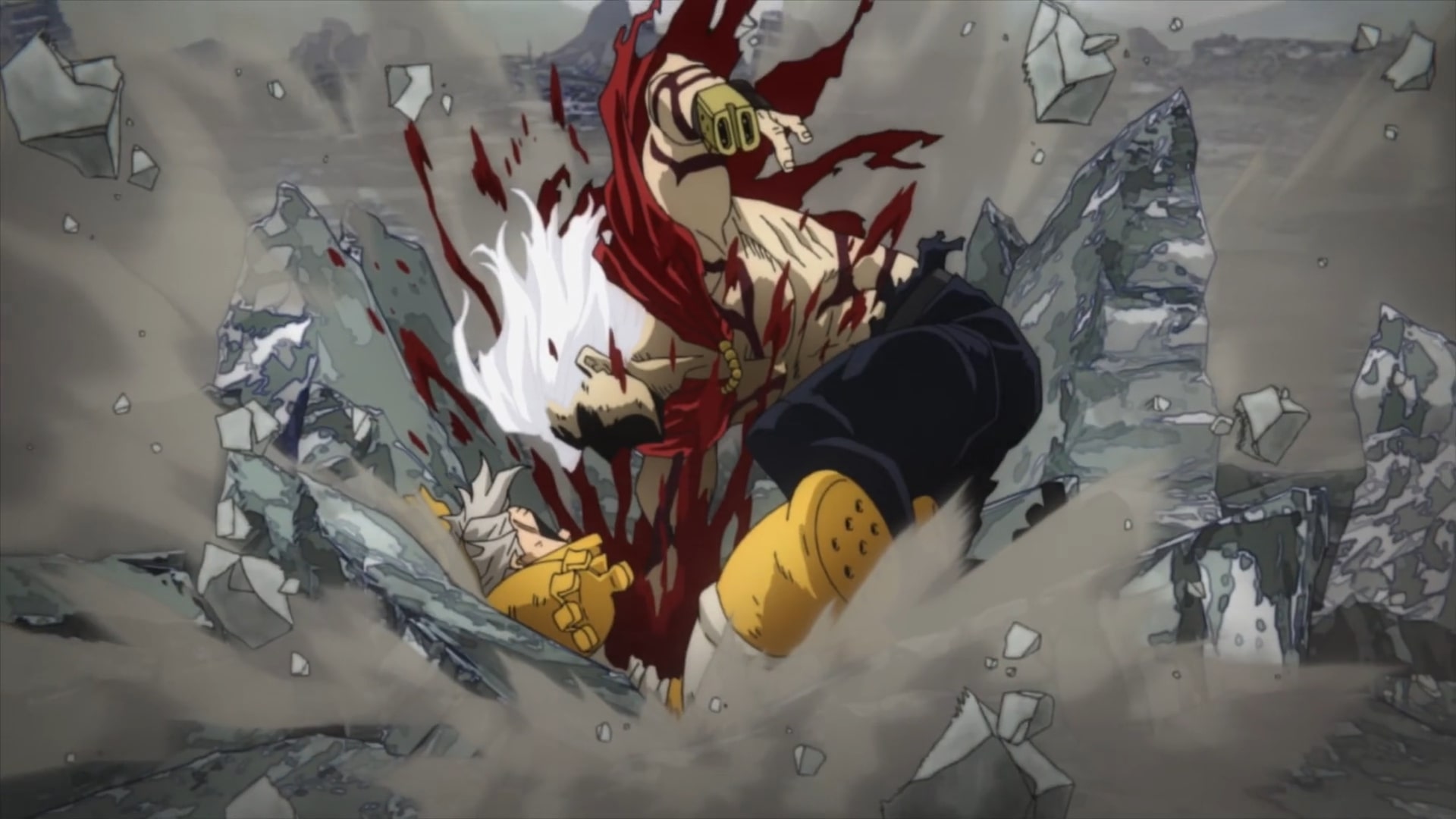 Before Bakuogo, Deku, or Endeavor could stop him, the villain brutally punches right through Gran Torino’s chest, leaving him in a pool of his own blood. It is obvious that the Pro Hero is seriously injured and the viewers must be wondering if he dies following the brutal beating. Although the episode does not shed light on his fate, one look at the manga clarifies that Gran Tarino is still alive and will surprisingly be seen fighting more in the Paranormal Liberation War Arc.

As Deku, Bakugo, and Endeavor are rushing to help Gran Tarino, Tomura Shigaraki shows his superior speed. Instead of attacking the trio, he leaps toward Aizawa. Luckily, Ryukyu intervenes and stops the villain just in time. Tomura is relentless and digs through her hands so that he can use the Quirk-Destroying bullets on Eraser Head that he has been carrying all this time. At this point, an emotionally-charged Deku vowing to never forgive him tries to use Blackwhip to restrain Shigaraki.

When that doesn’t work as he expected he goes as far as using 100% Wyoming Smash to take down the villain but Tomura bites down on his arm to stop the incoming attack. As soon as the right opportunity presents itself, Shigaraki throws the bullet and manages to hit Eraser Head’s right leg. The episode ends there on an inconclusive note without offering any answers. However, the Pro Hero knows that if the effect of the bullet spread through his body, he will lose his quirk. 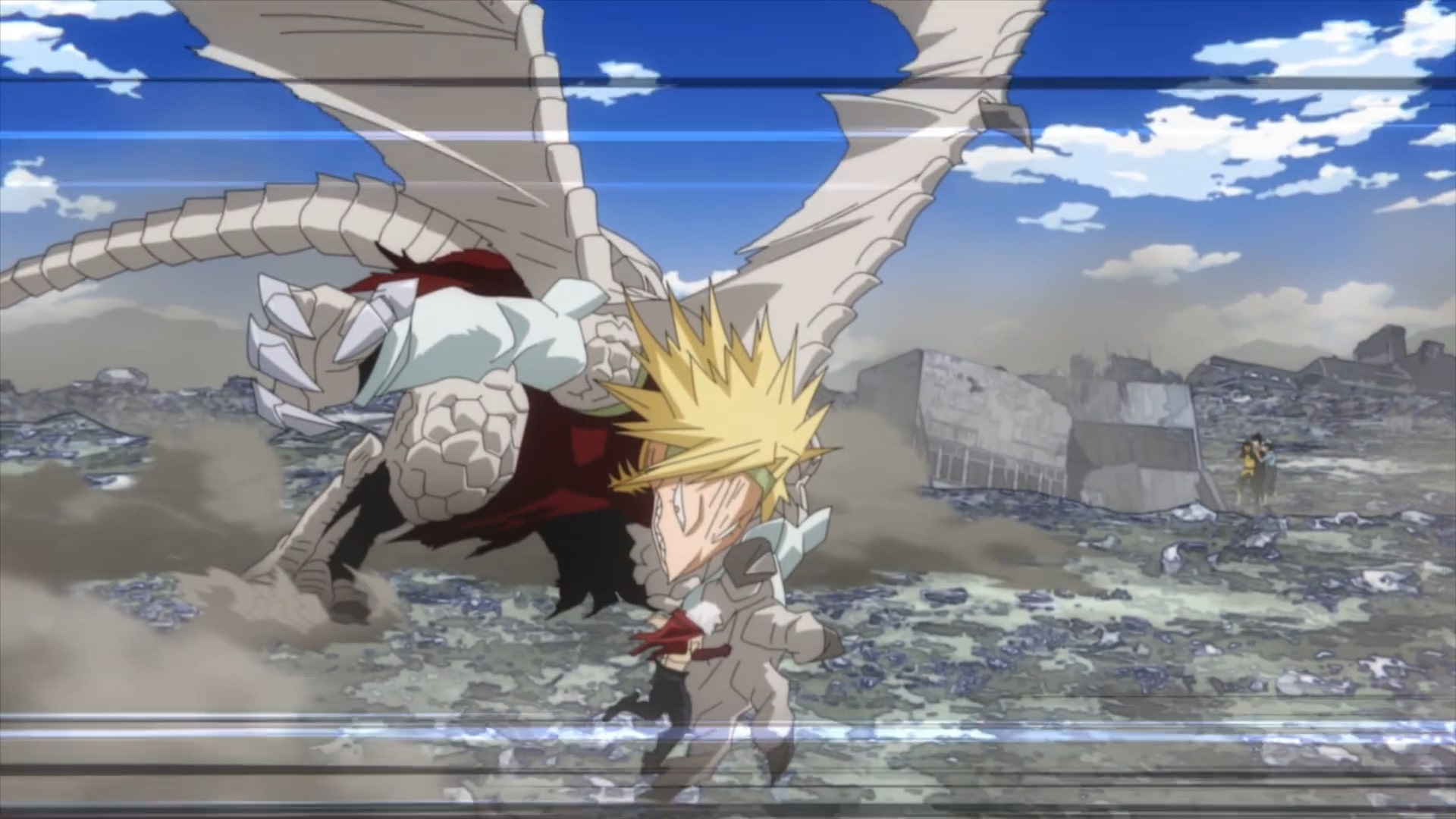 In Kouhei Horikoshi’s ongoing manga series, Eraser Head comes up with an interesting idea in the moment of crisis to avoid everyone’s worst fear from turning into reality. Before the bullet can take away his quirk, Eraser Head will cut his right leg in the upcoming episode and manage to keep his powers which will stop Tomura from his using decay wave at least at that moment.