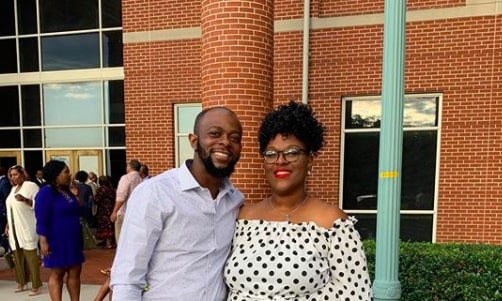 ’90 Day Fiancé’ has always had a way of gripping its audience through the lives of partners who aspire to come together with their K-1 visa. The couples who are separated by the differences in culture are united through the affection in their hearts. Though this may sound ideal, it need not always stay that way. Seasons of conflicts, negotiations, and happiness have taught us that this journey, as fascinating as it may look, isn’t a bed full of roses. It takes real grit to ride out the storm together. To keep it together, for better or worse.

Narkyia and Olulowo met on a dating site for plus women. They two had an instant connection that led them to get together. At the time, the two also had one child each from their previous partners. The trouble in paradise began when Narkyia found out that Olulowo had been lying to her regarding the whereabouts of his stay and about the mother of his son. This led to some severe rifts between the two. It was quite the dicey ride as Narkyia believed she was probably being catfished. Olulowo had even told her that he was a Nigerian Prince, which turned out to be completely baseless and untrue. If trust is the foundation of a relationship, then they saw their core problems, rooted right there.

However, many of us were left stunned when they did decide to walk down the aisle. They were able to put aside their differences and unite. The couple even broke it off at one time, after which they eventually got back together. After a while, they got their families to get to know each other. Needless to say, they invested steadfast in their relationship.

Absolutely. The two are very much married and living together. The couple seems to have put aside their differences to come together. They have endured the storm and seem to be making their married life work. Narkyia, as of recent, is on a regime to lose weight. All her recent posts are about her journey in this process. The two also do not seem to be lacking entertainment as Narkyia posted a video of Olulowo dancing at her cousin’s wedding. It isn’t just Olulowo grooving to the tunes but also their whole family in the multitude of Tik Tok videos they post.

They even have a unique hashtag to capture the essence of their relationship, ‘#lowkey.’ The genius hashtag seems to be a mash-up of both their names. What is public life without some backlash? It must be the criticism the couple received on the show that led to some insecurity on Narkyia’s part. She clearly seems to be over this as they are too busy with their personal goals and spending time with their families.

The next best news for everyone who rooted for them is that the couple is pregnant! That’s right; they are on the foothills of parenthood. Narkyia published a post that confirmed this.

Olulowo is no less enthusiastic about being the ‘baby daddy’ and kicked off some dance moves in a Tik Tok video they posted. He is also not shy about being vocal about his love for his wife. He often posts pictures of them together. His posts are usually in admiration for his wife and partner, Narkyia. In more ways than one, the love and commitment flow both ways.

In their most recent post, they seem to be on a hunt for baby names. These two have really outgrown their days on the show to the next phase in their lives.

Read More: Are Yamir and Chelsea From 90 Day Fiancé Still Together?