A botched robbery in Indianapolis, Indiana, led to the death of an expectant father and a beloved member of the society. Nathan Trapuzzano was gunned down while on his routine walk in April 2014 and Investigation Discovery’s ‘See No Evil: The Long Walk Home’ delves into this very case. Through security footage that provided the first lead regarding the case, the authorities were led to the culprit later on. So, let’s find out more about what happened then, shall we?

How Did Nathan Trapuzzano Die?

Nathan Benjamin Trapuzzano was born in May 1989. The Pennsylvania native did well in academics and other activities while growing up. Nathan graduated from Ball State University in Indiana with a degree in classical studies but later took up work as a computer programmer at a community college there. The 24-year-old was married to Jennifer Swihart and was eagerly awaiting the birth of his daughter when tragedy struck.

Sometime before 6 AM on April 1, 2014, Nathan was out on his morning walk in Indianapolis, something he did every day. This time, he was attacked by someone attempting to rob him. However, Nathan was shot once in the abdomen with a .40-caliber firearm and was left for dead. He was rushed to a local hospital, where doctors performed emergency surgery. However, Nathan was declared dead at around 7:40 AM.

Nathan was found in the parking lot of a local tire shop. The investigators learned right away that the store had surveillance cameras that caught some of what happened. There seemed to be two suspects, with one acting as the lookout. The other one followed Nathan before pulling out a gun and forcing him into the parking lot, where he was eventually shot. However, the footage was grainy, and identification was not possible.

Within hours of Nathan’s murder, the police were led to a then 16-year-old Simeon Adams, who was admitted to the local hospital with a gunshot wound to the neck. He had a difficult upbringing and an extensive criminal history. Simeon lost his mother when he was just over a year old in 1998, and later on, his father served time in prison for various offenses. Growing up, Simeon was arrested for battery and theft, but the charges were dismissed with the victim failed to show up for court proceedings.

Simeon also had trouble staying in school. Then, in December 2013, he was arrested for stealing a car and crashing it. He was suspected of another attempted burglary at the parking lot of a local strip club a few hours before Nathan was shot. The police believed Simeon was also responsible for another shooting that occurred on March 30, 2014. Teenager Erick Douglas was shot in the groin and leg after an argument with Simeon. Shell casings collected at Erick and Nathan’s crime scenes appeared to connect the incidents.

Furthermore, Simeon had violated his probation 13 times and was not at home when his probation officer came to check on him several times. However, Simeon was supposed to be on house arrest at the time. The probation officer, though, did not file for an arrest warrant after the third violation, something that could have possibly prevented the shootings. Over a week before Nathan’s death, Simeon was also suspected of robbing a gun store. Witnesses identified Simeon as the person in the surveillance videos from the strip club incident and Nathan’s robbery.

Where is Simeon Adams Now? 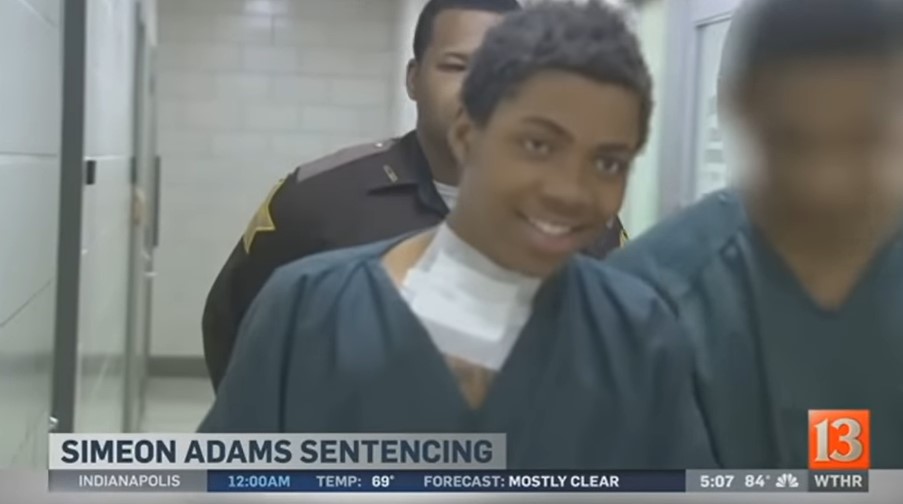 The authorities learned that Simeon also confessed to a friend regarding Nathan’s murder. According to the statement, Simeon asked Nathan to strip, and as the 24-year-old reached for his shoes, Simeon shot him in the abdomen. In June 2015, he pled guilty to Nathan’s murder and was later sentenced to 55 years behind bars. In October 2015, Simeon was sentenced to 12 years (to be served consecutively) after pleading guilty to aggravated battery and carrying a handgun without a license in the shooting of Erick Douglas. Prison records indicate he remains incarcerated at the Miami Correctional Facility in Bunker Hill, Indiana. The earliest Simeon could get out of prison is in 2055.