‘Natural Born Killers’: The Best Tarantino Film Not Made by Tarantino 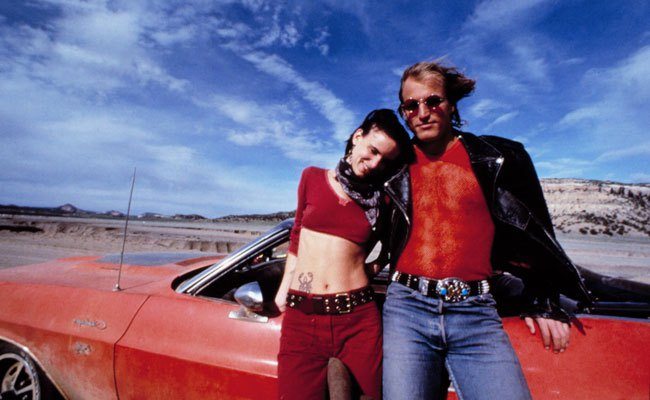 A close up of a rattlesnake is among the first images we see, deadly, poised to strike. The metaphor will come to view very soon.

Nothing Woody Harrelson did as dim bulb bartender Woody on Cheers for several seasons prepares us for the powerful performance he gives as deranged Mickey in Oliver Stone’s astonishing Natural Born Killers (1994), one of the most controversial films of the nineties, and among the finest. With blazing blue eyes, a wild intensity not seen before, Harrelson brings such menace to Mickey, such a sense of hatred for the entire human race that he is entirely frightening from the moment we first lay eyes on him eating pie in a small desert café while his equally dangerous girl Mallory (Juliette Lewis) dances to the music of a juke box. Together they are electrifying, a modern-day Bonnie and Clyde hitting the road to do murder because they like it and because they can.

Oliver Stone’s Natural Born Killers was written by Quentin Tarantino before he exploded into American film with Pulp Fiction (1994), but then Stone announced he wanted to direct and having a great more power than Tarantino at that time, it was given to him. He saw to it that the film underwent massive re-writes, so much so that Tarantino was relegated to just story in credits. Make no mistake, this is Tarantino writing, once again using Badlands (1974) as his reference and the Jean Luc-Godard theory that a film can be made with a guy, a girl and a gun.

An incendiary, shocking film with sudden outbursts of violence, and two characters who are devoted to one another but nothing else, it was a seething masterpiece made to provoke debate and controversy. And oh how it did.

The film explores how killers are turned into celebrities either during their run of killing or their trial, how the press elevates them in the eyes of the public despite their often horrific crimes. Look at Charles Manson? There was a time he was the most famous man on the planet for talking his followers into killing those they slaughtered. I remember watching in horror as the Bernardo/ Homolka killings were made public in Canada, though you had to read the American papers to know anything because court reports were banned in Canada.  They remain two of the most famous people in Canadian history having murdered two school girls in the most horrific manner. Homolka, who cut an infamous deal is out, the mother of free, walking the streets a free woman.

In many ways, Natural Born Killers is a vicious black comedy, a searing satire, speaking out about what could be considered a sickness in society on celebrating criminal behaviour. The film makes no bones about the fact we are fascinated by evil, making the host of a TV show as psychotic as our two criminals. Yet even The King of Comedy (1983) does this, with Rupert becoming a celebrity after kidnapping talk show hot Langford and appearing on his show, it is by no means something new. 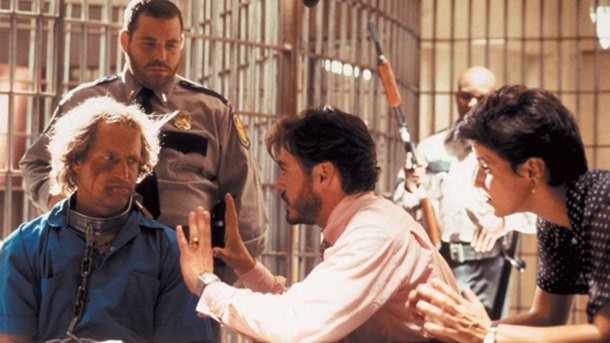 Mickey takes Mallory out of her home where her abusive father molests her regularly, killing her parents before he takes her, and across the country they go murdering anyone and everyone along the way because it is fun. They kill because they can and because they find it fun, a blood lust. Making their way across the country they slaughter everyone who crosses them and some who do not. When they kill a kindly Indian who raises rattlesnakes, they are bitten several times and flee to a drug store for anti-venom as the police converge outside the pharmacy. Though they put up a great gunfight, they eventually are taken and jailed. One year later, Wayne Gale (Robert Downey Jr.) a popular talk show host is preparing to go into the prison to interview Mickey, which will serve to make the killer only more famous than he already is. Taking advantage of slack guards during the shoot, Mickey charms them, catches them down and grabs a gun and opens fire, killing the guards and taking hostages. Her reunites with Mallor in the middle of a prison riot, kill the cop who out them behind bars, and make their way out of the prison to freedom, Gale along with time, gleefully firing a weapon, killing people, screaming he has never before been alive. Yet even though he helped Mickey escape, a killer is a killer and Gale cannot be left alive. The end credits role over scenes of the two killers on the road in their family van, children all around them, happy, now a family.

The film is like a pail of scalding water dropped on you, intense, lacerating, with dislikable characters throughout, but like Alex in A Clockwork Orange (1971), characters you cannot take your eyes off. Harrelson dominates the screen with a powerful screen presence and intelligence behind the eyes, however dark and calculating. Lewis is equally superb, frightening in her ability to lash out like a man, smashing grown men in the face, grabbing a weapon and killing without hesitation, screaming all the while. She is like an over excited lynx attacking her prey, just remarkable. Rodney Dangerfield is brilliant, drop, dead brilliant as her father, a lecherous, ass grabbing pig of a man who routinely abuses his daughter for the fun of it. Incredible casting. Tommy Lee Jones is superb as a ferret like warden, and Downey Jr. excellent as the vain, fearless Wayne Gale.

As he did with JFK (1991), Stone uses different stocks of film, 8mm, 16mm, 35mm as well as video and animation to tell his story. The editing is fast paced, like a music video, with images telling a great deal of the story.

A dark, brilliant work of art.