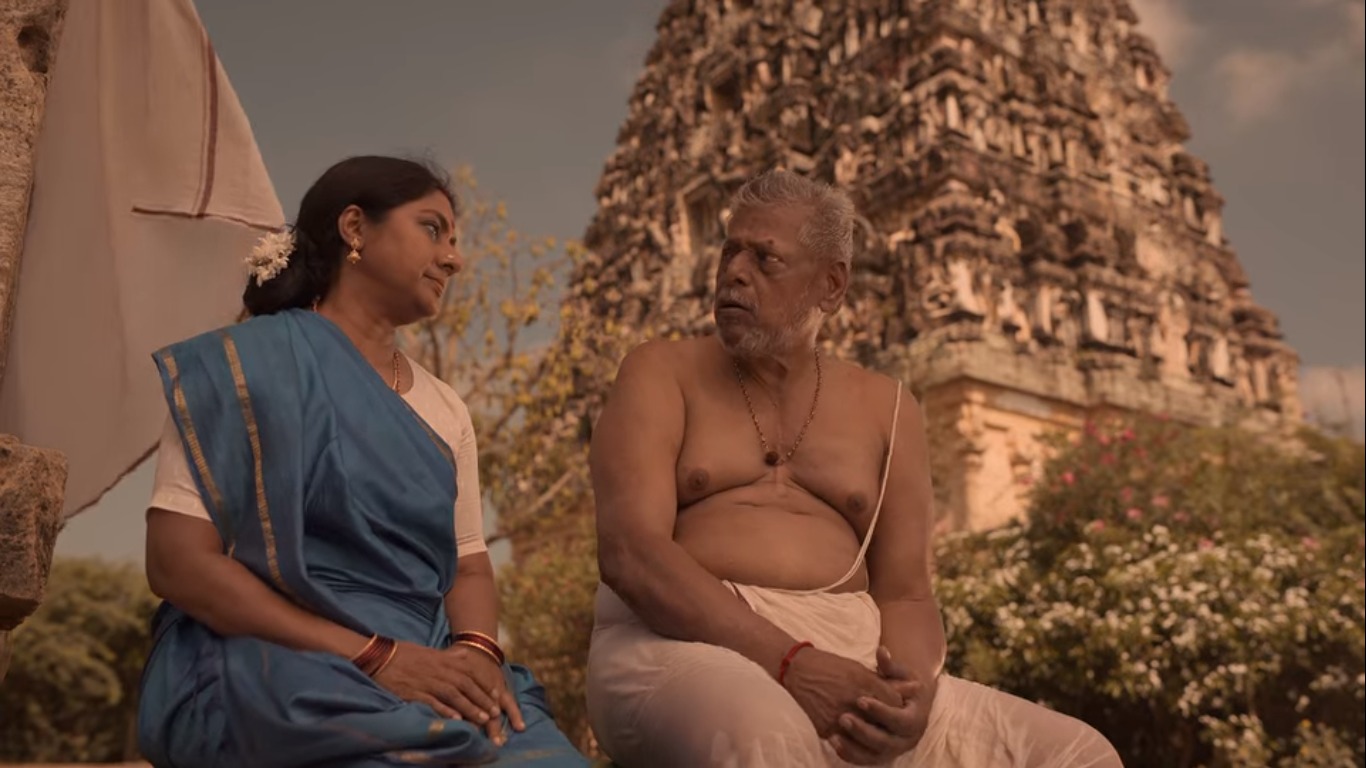 Netflix’s ‘Navarasa’ is an Indian anthology series that explores the complexities of various emotions through 9 stand-alone short films. Episode 4, titled ‘Payasam: Bheebhatsa,’ examines disgust in the unlikely surroundings of a wedding. The central character is the layered and embittered Samanadhu (Delhi Ganesh), who commits some truly unspeakable acts that seem justified in his twisted mind. Let’s dive into the nuanced story of ‘Navarasa: Payasam’ and find where the surprisingly effervescent emotion of disgust shows itself. SPOILERS AHEAD.

The episode opens with the aged Samanadhu, who everyone in the village merely refers to as “Subbu’s uncle,” rushing to perform his morning prayers on the riverside. When asked his name by a passerby, he grumpily retorts by saying there’s no point in learning his name as he will be called Subbu’s uncle anyway. As Samanadhu performs his rituals, his wife chides him for being bitter. We then learn of the uncle’s jealousy towards his successful nephew, who the whole town reveres for his financial success and philanthropy. 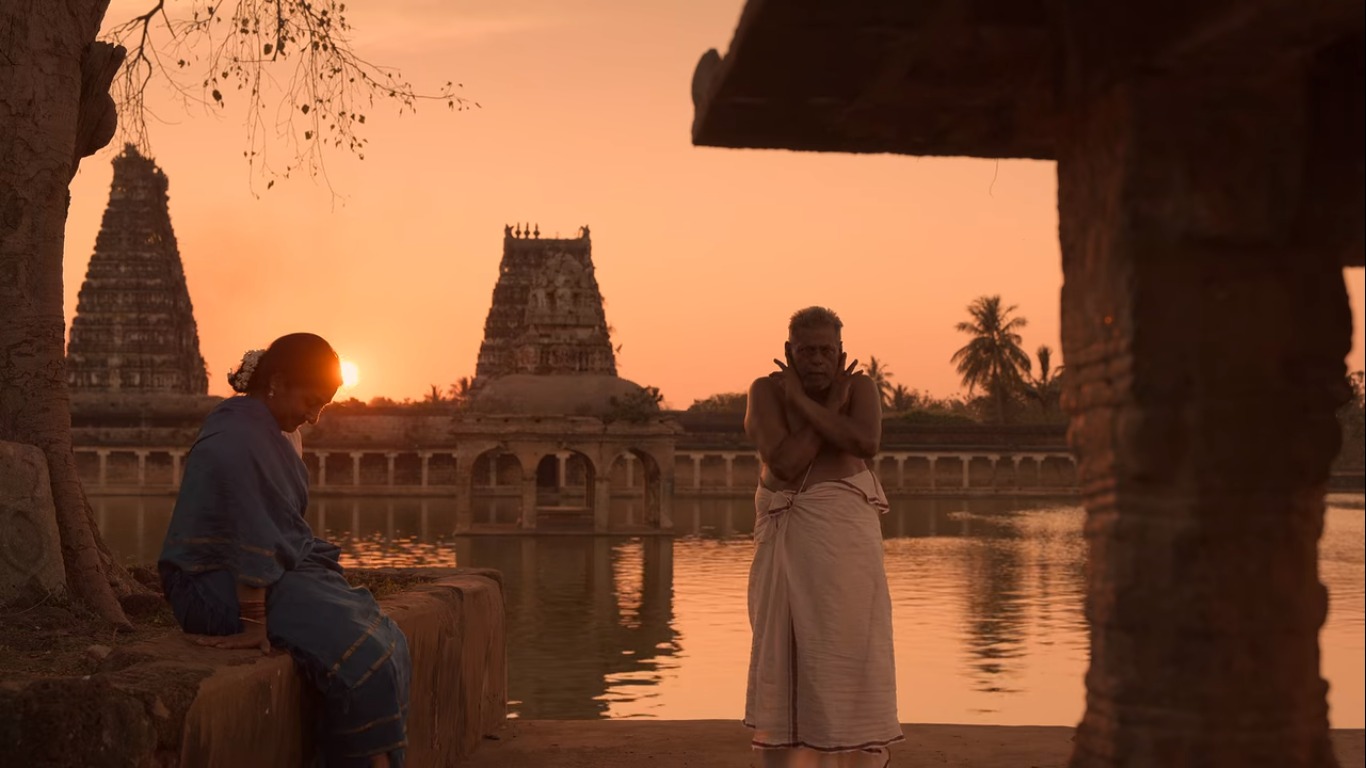 The uncle remains bitter, calling Subburayan unhealthy and pompous, as he performs his penance. The conversation between husband and wife continues, and we find that Subburayan has given his uncle land and financially helped Samanadhu’s children. As his wife reminds him of all the good his nephew has done, it is revealed that she is dead and that her bitter husband still vividly remembers her and continues to have conversations with her.

He finally resolves to go to Subburayan’s daughter’s wedding, which he was so far going to skip out of spite. His daughter and son, Bhagyalakshmi and Natarajan, revere their cousin Subburayan and help diligently with the wedding while also fretting about the whereabouts of their father, who is late to the ceremony.

Samanadhu finally arrives late at the wedding ceremony and remains bitter throughout. He chides his children for acting like slaves of their rich cousin. Amidst the ceremony, he again complains to his wife about how luck has favored his nephew, who has successfully married off all 7 of his daughters, while Samanadhu’s only daughter was widowed merely 3 months after her marriage. He finally asks his wife’s apparition to go away and sneaks into the kitchen. While the cooking staff is busy watching the wedding ceremony, he upturns the pot containing the ceremonial sweet dish— payasam. 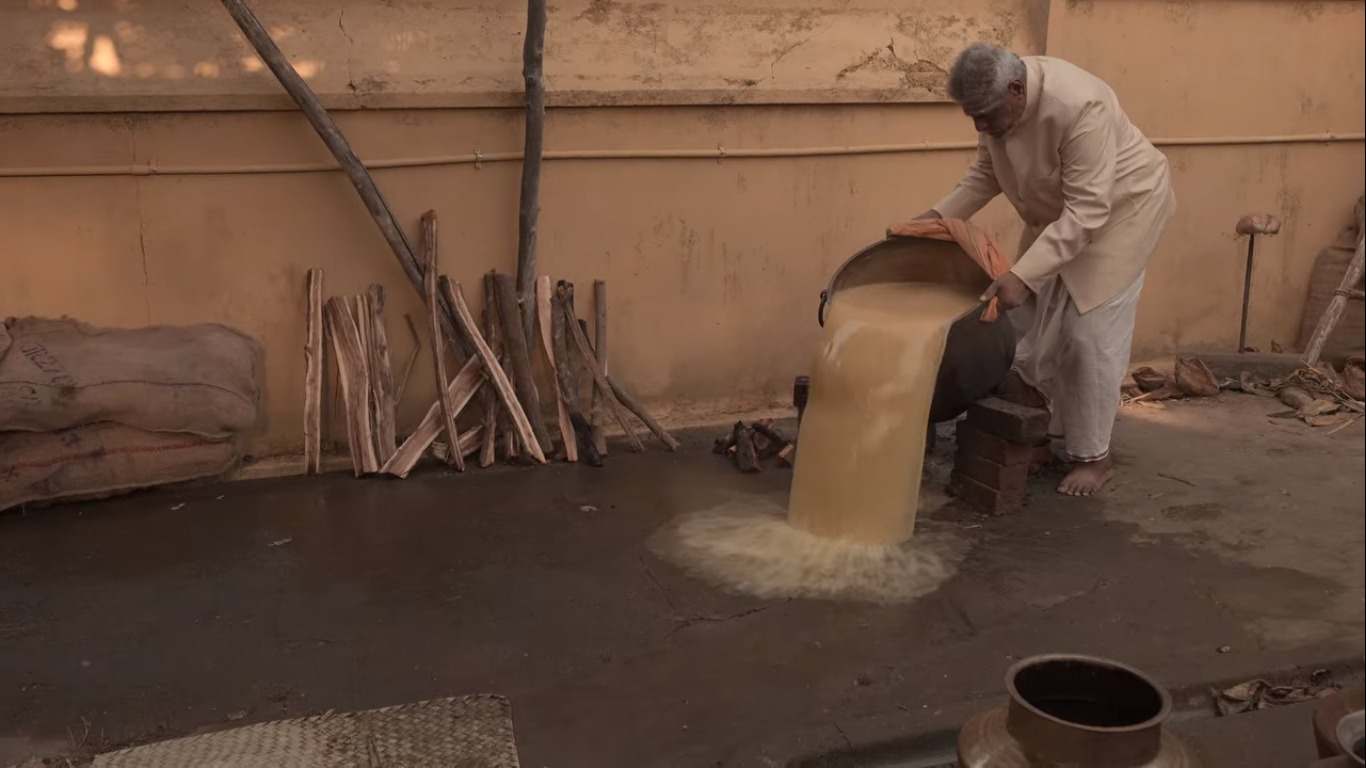 When the head chef, known for the sweet dish, returns to the kitchen and is aghast at the spilled payasam, Samanadhu reprimands him, saying that he noticed a dead rat in the pot. As the head chef quietly listens to the beratement, Samanadhu’s daughter Bhagyalakshmi looks on with an expression of disgust. Her father, unable to meet his daughter’s eyes, walks away, grumbling. The episode closes with Subburayan calling his uncle to bless the newly married couple, and Samanadhu obliges and throws flowers at the bowing young couple with the hint of a smile on his face.

Samanadhu’s disdain for his successful nephew is apparent from the episode’s opening scene and is built further as the story progresses. As we learn more about their dynamic, it becomes apparent that his hatred doesn’t stem from some particular wrong that Subburayan has committed. It is, in fact, jealousy of his nephew’s good fortune that most embitters the uncle. Throughout Subburayan’s seventh daughter’s wedding, Samanadhu is angered by the repeated comments of how perfect each of his daughter’s weddings has been. Therefore, tipping the vat of ceremonial payasam is our jealous central character’s way of ruining at least one aspect of his nephew’s otherwise perfect life. 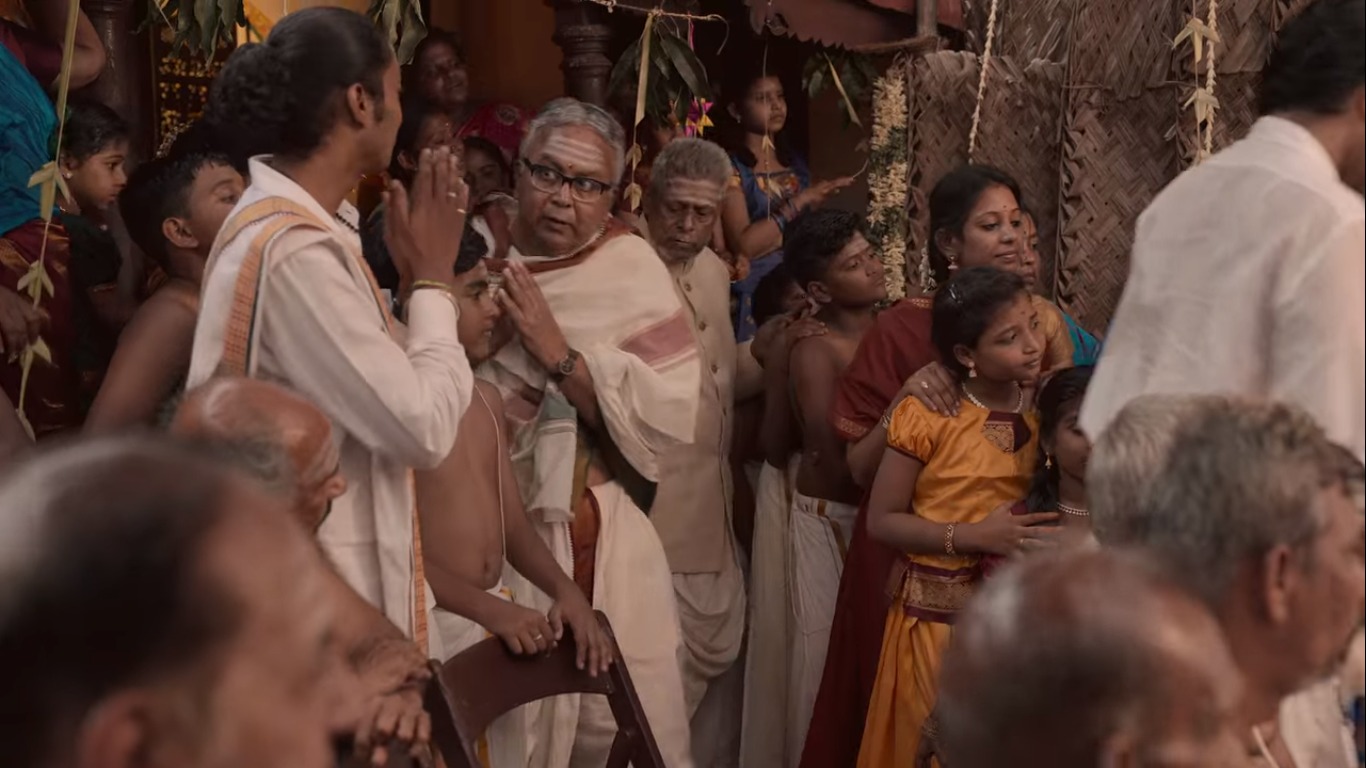 At a deeper level, since the payasam represents a healthy and happy marriage, the uncle may also be passing on some form of ill will to his nephew’s daughter’s marriage. He feels angry at his own daughter’s misfortune, who was widowed soon after her marriage. He cannot help but compare this to the seven successful marriages of his nephew’s daughters and most likely gets some satisfaction from his act of vandalism which he (likely) hopes will result in a less-than-happy marriage of the young couple he is called upon to bless.

Does Bhagyalakshmi Realize What Her Father Has Done?

The episode closes with Samanadhu’s daughter staring in disgust at her father and his handiwork. Though it seems like she might be reacting to his description of the dead rat he apparently found floating in the vat, it is more likely that she has figured out what her father has done, and the emotion on her face is in response to his petty act of vandalism. The biggest clue we get regarding this is when the father is unable to meet his daughter’s eyes, making it quite clear that at some level, he is embarrassed by his actions. 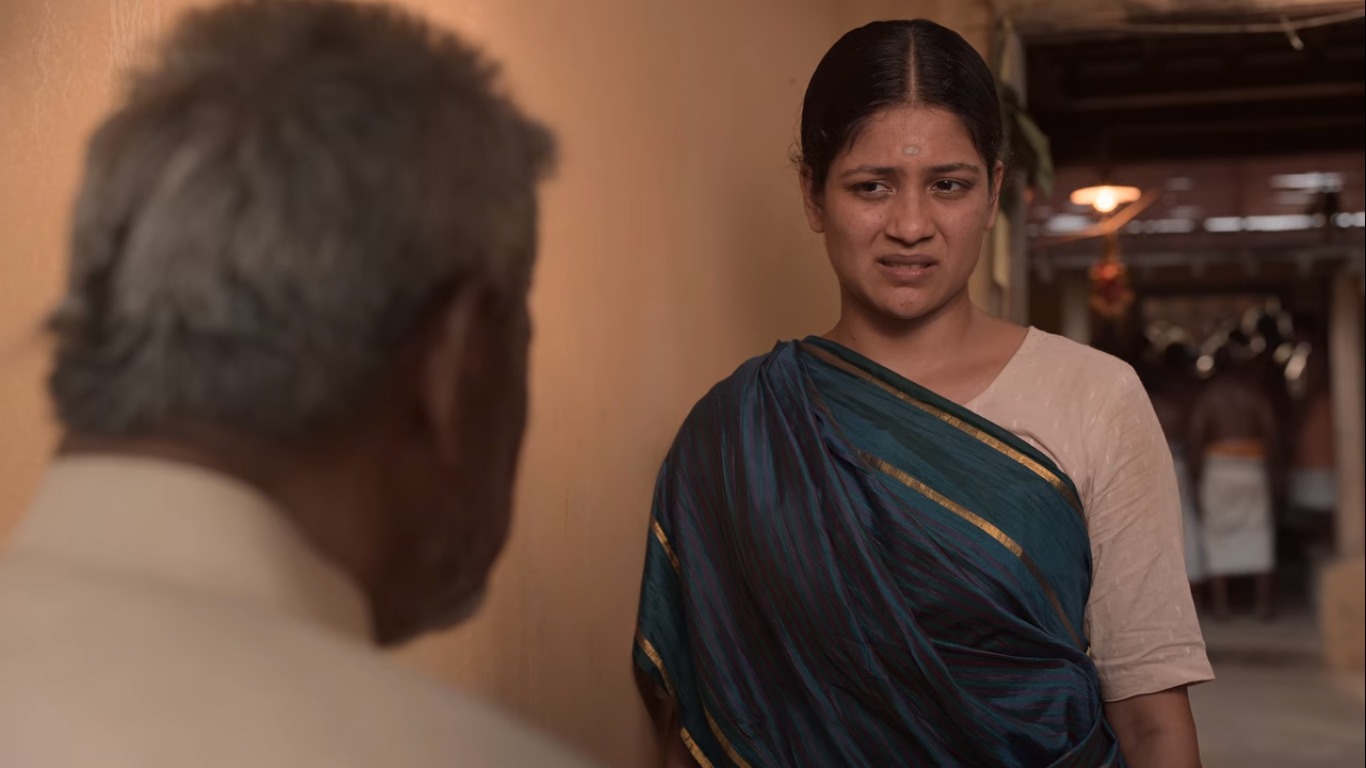 This is not missed by his daughter, who knows of Samanadhu’s hatred for his nephew and likely understands very well what has just occurred. Her question to her father regarding how he could pick up such a heavy vat by himself seems to be a pointed query aimed at his intentions. At face value, she seems to be asking why he would try to upturn the vessel himself instead of calling others for help, knowing full well that her father had to carry out the act alone because there was no rat in the payasam and he had merely fabricated the story to make the wedding unauspicious.

At a deeper level, she seems to be questioning just how deep his disdain and need to hurt his nephew runs. With her question, it seems like Bhagyalakshmi is actually questioning her father about how far he is willing to go just to show his spite and bitterness. It is this bitterness that she sees so clearly in her father at this moment, which is also the cause of her expression of utter disgust.