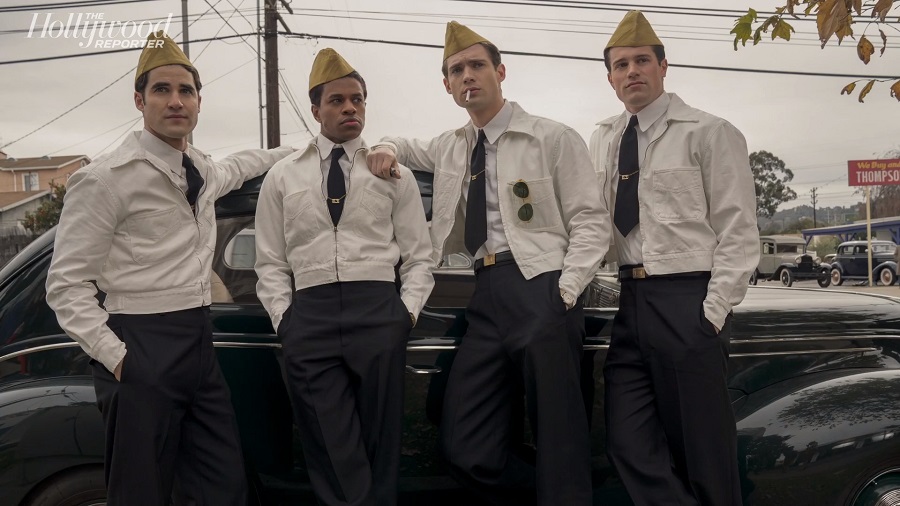 The first episode of Ryan Murphy’s ‘Hollywood’ is painted in the colors of the late 40s Hollywood, made brighter by the dreamers waiting to get their big break. It plays with their optimism, the promise of seeing themselves on the big screen, and the fame that they will have someday makes them hold on to their desires, even if they might not come true in the long run. But we want it to come true for them. We get indulged fairly quickly, and even before we completely know them, we are already rooting for them. Such is the allure of Hollywood and the undying hopefulness of the characters as well as the viewers that dreams do come true, just like in the movies.

The Second World War is over, and aspiring actors are flocking to Hollywood once again. One of these people is Jack Costello. After serving in the War, he has come to Tinseltown to try his luck and become a movie star. The pressure on him is not just of his own aspirations but also of providing for his pregnant wife. Every day, he stands at the gates of the studio, waiting to get picked out of the crowd. However, he doesn’t get his dreamy Hollywood beginning. Or at least, not yet.

He meets a man named Ernie West. He runs a gas station and offers Jack to work for him. However, there is a lot more on the plate than Jack had initially signed up for. He is forced to bend his morals to provide for his family. This also crosses his path with Archie Coleman, a young black writer who also dreams of breaking into Hollywood.

The series opens with the magical touch of Hollywood and its stardom and easily lures in the audience into what is undoubtedly going to be a much grimmer story than initially imagined. Murphy has a way of sneaking in these macabre touches to his stories, covering them in beautiful wrapping but not compromising with the reality either.

We witness the first turn of events for Jack when it is revealed that he has actually signed up for an escort service, and would have to do some unpleasant things. It is not really a surprise. We expected something like this, and that is what makes it all the more amusing. If you know what road you might have to take, would you start out on the journey at all? As a viewer, we might delve on this, but the show presents its answer fast enough and moves on to other parts of the story.

It also creates a divide in the portrayal of characters. While one of them is a white, straight male with who is initially hesitant to compromise, another is a black, gay man who has probably been around for longer, enough to know where he will have to set his dreams aside for a while and focus on survival. Like his other works, Murphy intends to go as deep as possible in the world of then-Hollywood, digging out all the things, not necessarily good, that have endured their way to the current scenario of Tinseltown.

It is too early to tell how farther ‘Hollywood’ probes into these matters and if it comes out of this as wonderfully as other works of Murphy. For now, however, we get the idea that it is going to be a fun ride. We see a story full of secrets that turn into delectable celebrity gossip. On the horizon, we see the situations that will further test the limits of the characters, questioning them how far they are willing to go for their dreams. And, in turn, posing the same question to the audience.

In the meantime, it keeps us involved with an engaging story with exciting twists and turns. The episode ends in a cliffhanger, and if this pattern continues for the rest of the season, the Netflix series will surely have the viewers jumping from one episode to another without a second thought. This surely makes it a promising prospect. After all, who doesn’t like to see a story about dreamers? The question that remains is whether or not the series will sustain with this momentum and keep us engaged till the end.

Read More: Is Hollywood Based on a True Story?