‘The Influence‘ or ‘La Influencia’ takes no time in setting up a creepy atmosphere where the horror is almost pervasive. However, the scares do not come as expected in horror movies. Instead, the film takes time to make the supernatural elements manifest themselves clearly. Moreover, ‘The Influence’ isn’t just a horror story. It is much more than that. The movie becomes a tale of family trauma, misplaced anger, rotting love, all of which are peppered with witchcraft.

Over the 99 minutes runtime, ‘The Influence’ is not afraid to take up and explore various issues under the guise of horror. In fact, by the time we reach the end of the movie, viewers are almost led to believe that ‘The Influence’ packs a deceptive twisted punch. We are going to elaborate more on that as we explain the ending of the film. 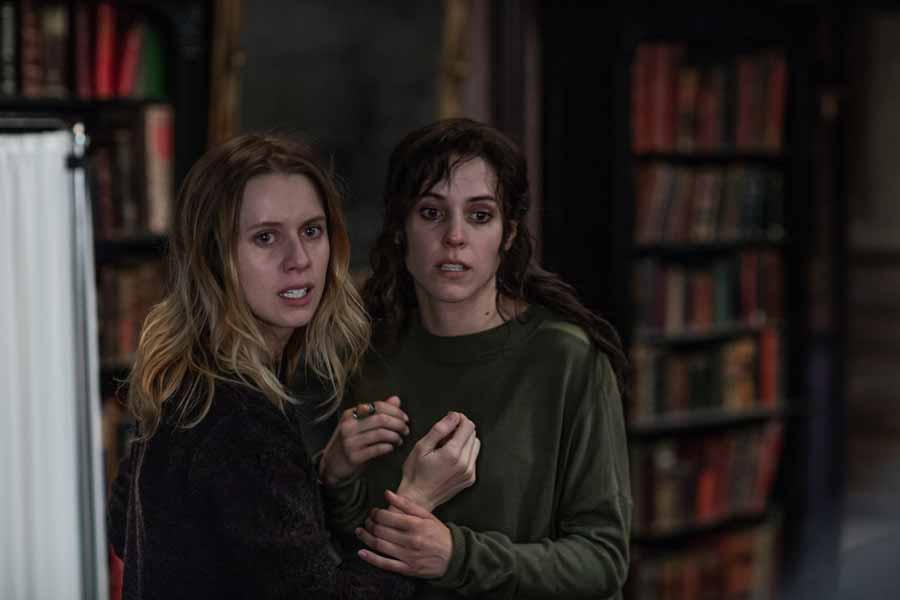 The story starts when Alicia goes back to her childhood home to care for her dying mother. She is accompanied by her husband Mikel and her young daughter, Nora. As we are introduced to the family, we understand that they are going through a rough patch financially. Mikel tries to find work desperately in the small town, finally getting a job unloading fish. Meanwhile, Alicia gets a job at the hospital as a nurse, while Nora has to face the challenge of adjusting to a different social circle in a new school.

However, the more pressing concern is Alicia’s dying mother, who seems to be on her last legs. While one would expect empathy at this point, it becomes abundantly clear that Alicia does not like her mother. As she reconnects with her sister Sara, she reasserts that she would never have come back to her childhood home if not to help her sister. The daughter’s animosity towards the mother becomes clear as the plot unfurls and we get to see flashbacks of the mother involving her young children in various esoteric practices related to witchcraft. The practices often involved harming the children as well, since we see the witch get one of Sara’s teeth and cut Alicia’s toenail in half.

In the present day, the witch lies comatose on her bed and seems helpless. However, through supernatural methods, she manages to establish contact with Nora, her granddaughter. As Nora’s interactions with her grandmother increases, she notices a strange young child lurking around her school. Eventually, she begins to befriend this child. Soon it becomes clear that Nora’s grandmother favors her when in a reading of the will it is declared that Nora is to be the sole heiress to all of her grandmother’s fortunes.

All the family members are taken aback and Alicia begins to suspect that the witch might have something planned for her daughter. She repeatedly tries to break her mother’s control over Nora, but we come to realize that Nora is under the influence of the witch completely. Moreover, she likes being close to her grandmother, believing that the old lady could mean her no harm. Meanwhile, strange occurrences keep happening and every member of the family is affected by it. Finally, the two sisters decide that witchcraft has no place in the household and they burn all of their mother’s belongings. Naturally, this does not please the witch and she sets her own plan in motion to get rid of her daughters.

Firstly, she brings Nora under her influence and using the other young child, she carries out the brutal murder of her own daughter and Nora’s aunt, Sara. The woman’s face is caved in with a spade for attempting to break the witch’s control over Nora. Then, she turns her attention to Alicia, the daughter she seems to hate more. Her plan is to let Alicia suffer by killing her husband and showing her how Nora is under the witch’s control.

Alicia is forced to face her deepest demons as a result of her mother’s actions. The strained relationship between Alicia and her mother becomes clear as we realize that the sisters tried to get the attention of their father, who happened to be the love of the life of the witch. Their games to grab the father’s attention resulted in his accidental death and the mother blamed the daughters for it. Despite admitting her fault, the witch is in no mood to forgive Alicia. It results in a violent final confrontation that is bloody and intense. Mikel and Alicia do their best to reclaim Nora from her grandmother’s influence. The film ends with the stark realization that love often mutates into horrific forms when mingled with grudges and resentment.

What is Nora and Her Grandmother’s Relationship?

It would not be a stretch to say that the relationship shared between Nora and her grandmother forms the crux of ‘The Influence’. In fact, the movie derives its title from the fact that the young girl comes under the influence of her grandmother. At the start of the movie, the relationship starts off innocuously enough. Nora displays a childlike curiosity to know more about her dying grandmother who is kept behind a locked door. However, her parents, knowing the truth about the old woman being a witch, prevent their daughter from getting too close to the comatose lady. The witch has other plans. She systematically begins to bring Nora under her control, by befriending her through the mysterious young child. Furthermore, she convinces Nora that grandmothers have the best interest of the grandchildren at heart.

Eventually, she gets Nora to put on one of the lockets and place a lock of her hair inside, allowing the witch to control her. Under her grandmother’s evil control, Nora grows aggressively more violent and her behavior becomes disturbing. There is a chilling scene where she brutally attacks a classmate. In yet another scene we see her axing a dog to death before smearing blood on her face and howling out to the night sky. Nora’s transformation from a quietly curious girl, to a dangerously silent controlled person, is akin to a possession almost. We learn that the witch has always liked to control the lives of children, getting them to do her deeds, but she specifically focuses on Nora, due to the relationship the young girl shares with her.

The witch acts out of love that has manifested itself as evil. She misses her dead husband and wants to make her daughters pay for his death. She does not bear any ill will towards Nora in particular. In fact, the young girl is a means to an end for her. The witch uses Nora as a vessel to carry out her deeds and the relationship changes the young girl irrevocably.

The ending of a horror movie is often the focus for a lot of readers, because who wants to watch a horror film that does not have a twisted ending. Moreover, a good ending to a horror movie would make for a rewarding experience even if the rest of the film does not quite live up to the mark. First off, the final stretch of ‘The Influence’ comes after a violent confrontation where Alicia and Mikel fight the witch for control over Nora’s life. The scene ends in Nora falling from a window in the house and injuring herself while the witch barely clings on to her life.

In the hospital, Alicia ensures that her mother will never control Nora again and turns all her attention to the young girl. In a dream sequence, we see Nora trying to convince her grandmother to be good and walk the path of light, but the evil has seeped deep within her and the old woman cannot let go of the darkness. More importantly, the old woman cannot let go of Nora either.

Nora tries to end her grandmother’s misery completely by ending her life, believing that the old woman would find a place in heaven and protect her granddaughter. Needless to say, things do not go according to plan. In a fantastically frightful scene, the woman grabs Nora by the neck and makes her face true evil, which is a grotesque form that her dead husband takes. The experience is enough to jolt Nora out of unconsciousness. When she wakes up she reiterates her love for her parents but at the end of the movie, we see her scratching the car seat with a finger in the same way her grandmother was scratching the hospital bed.

What does this mean, in the context of events as they have played out? It would go on to suggest that there is no happy ending possible for Nora. While the immediately evil influence of the witch seems to have ceased, the darkness she transferred into Nora is there to stay. It is not something that Nora will be able to get rid of. The twisted relationship between Nora and her grandmother seems to have left her irrevocably damaged and open to the dark forces that the witch commands throughout the movie. Ever since we see the literal darkness enter Nora in the witch’s bedroom, the end of the movie brings no respite for the character, because the darkness only seems to have grown stronger, although better hidden than before.

The evil traits Nora displays on the surface in the latter part of the movie seems to have disappeared. Perhaps it is because the grandmother’s influence is weakened. Nora even makes her case to the grandmother, believing she loves her. She tries to get the woman to protect her, but the witch shows her true colors. She is beyond redemption and is not in a forgiving mood either.

Although her influence over Nora may have weakened, the movie’s ending seems to suggest that it has not completely disappeared. Perhaps, it is another smart move from the witch who is biding her time before she can resume control over Nora and unleash her final vengeance on Alicia, her only surviving daughter.

A word must be said for the way ‘The Influence’ leaves the ending ambiguous. At first, it seemed as though it might go for the cliched happy ending that is common in horror stories. Mostly, joy arises at the end because the characters have gone through some trouble to exonerate the evil and we feel they deserve happiness. In ‘The Influence’, the characters are much more complex and though they have to tackle their demons, we are faced with an extremely unforgiving presence who is not willing to forgive and forget. Thus, it becomes clear that evil has only been momentarily quelled, not completely vanquished.

Read More in Explainers: In the Tall Grass | I am Mother