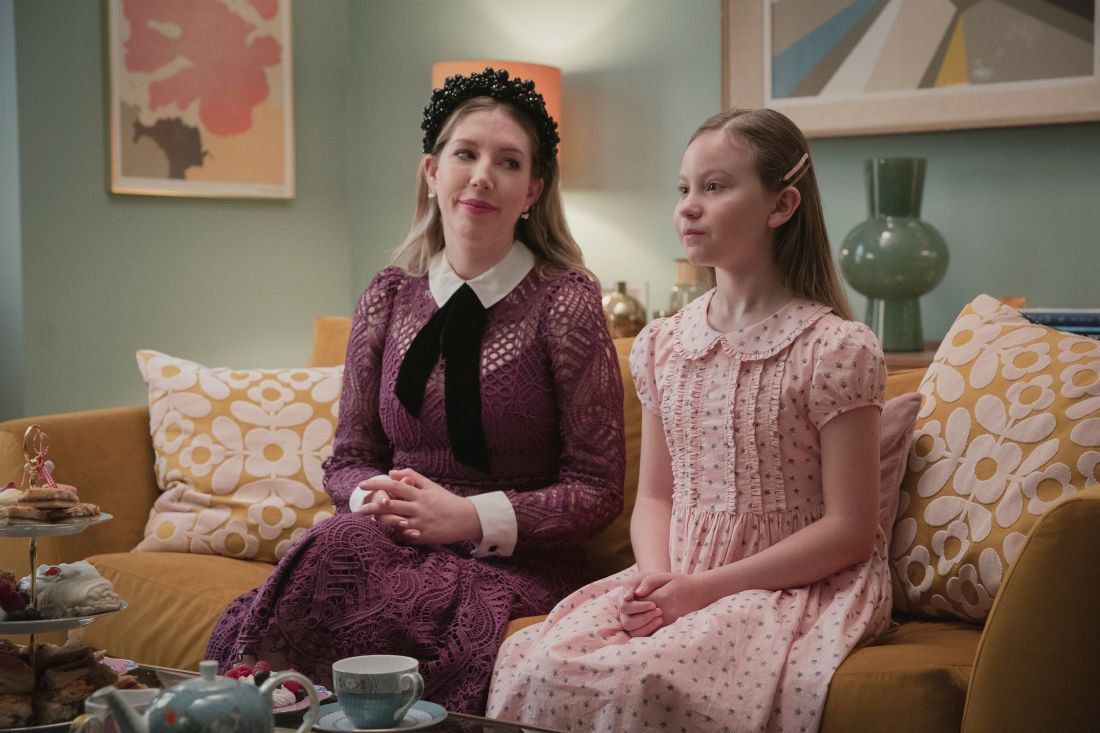 ‘The Duchess’ marks Katherine Ryan’s first foray into writing, producing, and acting in a series of her very own. In the brand-new Netflix show, Katherine stars as an alter-ego of herself – her character even shares the same name. The show also stars Katy Byrne as Katherine’s daughter, Olive; Rory Keenan as ex-partner, Shep; and Steen Raskopoulos as Katherine’s boyfriend, Evan.

Put together some havoc, bluntness par excellence, and brashness, with a touch of narcissism, and you’ve got yourself a reel-life Katherine Ryan. Katherine leads a content life as a single mother to Olive, whom she shares with ex Shep. Katherine and Shep hate each other’s guts – but manage to successfully conceal this from their young, impressionable daughter. Katherine’s short-lived relationship with Shep has scarred her to the extent of life-long commitment issues. She keeps current boyfriend, Evan, at arm’s length for fear of developing an attachment.

Both Olive and Katherine consider their two-person family to be a member short. Given Katherine’s aversion to fostering a serious relationship with Evan, she considers him an absolute last resort to fathering her second child. Instead, for Olive’s ninth birthday, Katherine gifts her a trip to a fertility clinic and the two go sperm donor hunting for Katherine. When nothing comes to fruition from the trip, Katherine is forced to change course. She is then struck by an outrageous thought: to ask ex-husband Shep to be her sperm donor. She figures that if their brief union could produce someone as perfect as Olive, there’s no harm in giving it another go. Shep reluctantly agrees, but his terms and conditions apply.

The only catch? Evan takes this as an affront to himself and breaks up with Katherine.  Katherine is inconsolable and struck by the Evan-sized void in her life. The knife is twisted in even harder when she learns that Shep has found love again and is engaged to the rich, like-minded Cheryl. The only consolation for Katherine comes when Cheryl convinces her and Shep to give sperm donation another chance.

A while later, when Katherine is at her lowest, she reaches out to Evan in desperation. Seeing Katherine express her vulnerability for the first time, Evan wastes no time in rushing to her aid. Eventually, they patch up. Once Katherine reconciles with Evan, all is well in the Ryan household – until, that is, Katherine learns she’s successfully been impregnated and Shep is baby-daddy to-be. Then, all hell breaks loose.

The Duchess: The Ending

The ending of ‘The Duchess’ is fraught with palpable tension and endless serenades from Shep’s former boyband. The six-episodes long series culminates in Shep and Cheryl’s wedding and a high-stakes showdown between Katherine and Evan. At the wedding, Katherine is left with no option but to come clean about the baby to Evan. Evan does not take this kindly, to say the least. He blows off steam by spilling the beans about Katherine and Shep’s hate-hate relationship to Olive and the rest of the wedding party. Katherine reaches a boiling point with Evan and ends their relationship then and there.

Katherine admits to Olive that she and Shep share their set of differences but affirms that those differences will never get in the way of the equation they both share with Olive. Katherine and Olive ride off into the sunset together and we later learn that Katherine eventually ends up having Shep’s baby.

Why does Katherine break up with Evan?

A running theme in the show is that of Katherine prioritizing her relationship with her daughter above everything and everyone. Throughout the series, Katherine is depicted as vicious and caustic towards the world, but nurturing and supportive of her daughter. She shares with Olive a unique understanding and equation, unmatched by every other relationship in her life. Katherine’s dedication and resolve towards raising her daughter well are intended to absolve Katherine of her miscreant behavior.

Katherine is fiercely protective of Olive, to the point of smothering her. When an adoption caseworker questions Katherine’s ability to raise a child well, she lashes out with all her might. When a hairdresser at a salon belittles Olive, Katherine instantly bulldozes her. While Katherine despises and loathes the very existence of her ex-husband, his doting and caring nature towards Olive is why she tolerates his presence. Evan, on the other hand, has crossed a line in the sand by infringing on hers and Shep’s relationship with their daughter. That, to Katherine, is beyond redemption.

What does the last scene symbolize?

The last scene travels nine months into the future to give us a glimpse of the newest addition to the Ryan family. The last scene can be translated into a teaser of what the upcoming season of ‘The Duchess’ could delve into.

Read More: Is The Duchess a True Story?