Netflix’s The Duchess: Recap and Review 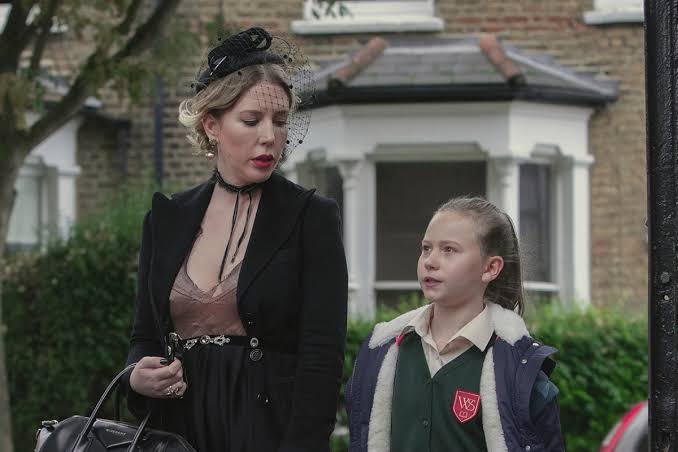 ‘The Duchess’, written by and starring comedian Katherine Ryan, revolves around a fashionable and turbulent single-mother modeled on and named after the comedian herself. The reel-life Ryan is fierce, brash, and has a no-filtered outlook on life and comedy. Apart from Ryan, the series also stars Katy Byrne, Rory Keenan, and Steen Raskopoulos.

Katherine’s world comprises Olive, her 9-year-old daughter, ex-husband Shep, boyfriend Evan, and friend and friend/co-worker Bev. Olive is precocious in some aspects but utterly guileless in others. She is exceptionally well-behaved and intelligent beyond her years, yet oblivious to the mischievous ways of adolescent life. Katherine’s ex-husband, Shep, is a libertarian conspiracy-theorist whose previous life as a boyband member thrust into the limelight has seemingly driven him to live off-the-grid in a rundown houseboat. His presence only serves to be a thorn in our protagonist’s flesh. Unbeknownst to Olive, Katherine and Shep constantly lob petty insults, criticisms, and threats at each other, but put on a united front for their daughter. On the other hand, Katherine’s boyfriend, Evan, is sweet, unassuming, and, in our protagonist’s opinion, too clingy for his own good.

The series begins on the momentous occasion of Olive’s ninth birthday. For her birthday, Katherine attempts to fulfill Olive’s wish of getting a baby sibling. Since Katherine is averse to having a baby with Evan and tying herself down, they head to a fertility clinic. To Katherine’s chagrin and disbelief, the doctor is of the opinion that, because of her age, she is more than likely to face trouble conceiving. The nail in the artificial insemination coffin comes when Katherine is offered some excessively young options for sperm donors. But instead of admitting defeat, our heroine finds a strange but workable solution. Katherine realizes that despite being a match made in hell, she and Shep produced and raised a marvel of a child together. If they could do it the first time, why not a second? She then comes to a difficult decision: to swallow her pride and ask Shep to be her sperm donor.

Things do not go quite as planned. In classic Shep fashion, he gives Katherine a stringent list of demands to be met if he is to be sperm donor to Katherine’s second child. In classic Katherine fashion, Shep is almost instantly rebuffed. When Evan learns of Katherine’s bold proposition to Shep, he considers it the final straw, effectively ending their relationship.

Katherine spends the next few weeks moping around and pining for Evan. To make matters worse, Olive’s been up to absolutely no good at school. Emulating Katherine and retelling her mother’s classic but highly inappropriate jokes to her schoolmates has landed Olive in trouble. Katherine leaves it to Shep to reprimand and talk sense into Olive. But when mother and daughter arrive at Shep’s houseboat, they discover that he’s not the only one there. Shep introduces Cheryl, his new fiance, whom he met and clicked with instantly, to the stunned Katherine. In his giddy excitement, Shep not only fails to admonish Olive but instead commends her for rebelling against her school.

Her daughter’s coming-of-age rebellion and Shep’s newfound happiness with Cheryl only serve to drive Katherine to her wit’s end. The only silver lining to her otherwise lousy week is that Cheryl is surprisingly (and, to Katherine, rather suspiciously) accommodating and even encouraging of Shep fathering Katherine’s baby. Cheryl convinces Shep to go ahead with Katherine’s plan, no holds barred. Cheryl begins to religiously deliver Shep’s sperm to Katherine, who soon grows tired of her eagerness.

While Katherine tries to have a second child, her first child is growing up within the blink of an eye. Distraught at the thought of her baby getting up to mischief with her classmates, becoming too big to hold her mother’s hand, and bravely deciding to chop off her locks, Katherine beseechingly reaches out to Evan for help. Evan is over the moon when Katherine finally admits she desperately needs him and runs a mile a minute (literally) to come comfort her. They vow to nurture their relationship and build a future, with kids that Evan will father, together.

But Katherine is in for the shock of her life. When she gets what can only be described as a pregnancy hunger pang, Katherine realizes that artificially inseminating Shep’s sperm worked. With no idea how to divulge this to Evan, she keeps mum. The awkward situation comes to a head at Shep and Cheryl’s wedding when Katherine is forced to reveal to Evan that she’s pregnant with Shep’s baby. Evan flies into a rage and, as revenge, confronts Katherine about the animosity between her and Shep in front of her daughter. Katherine considers this unforgivable and ends things with Evan once and for all. She explains to Olive that, despite all the bickering that she and Shep get up to, they’ll always respect and love her. Together, mother and daughter leave the wedding.

‘The Duchess’ borrows the now stale trope of an immoral, debauched central character from shows like ‘Fleabag’ and ‘Russian Doll’ which, incidentally, made much better use of it. To this end, Ryan’s punchlines are added purely for shock value, but end up taking away from the show more than adding to it. Some are all-out unconscionable, others fall flat, and a select few add zing and flavor to the series. Ryan’s stand-up roots shine through in certain punchlines that draw a much-needed laugh.

The show celebrates rather than mocks or makes a point out of our protagonist’s flaws. A good example of this lies in Katherine’s character development. Even the greatest of anti-heroes have moments of introspection that lead to character development and changes in their unscrupulous behavior – Fleabag, for instance, learns to accept her past, sins and all, and move on with better moral clarity. While ‘The Duchess’ does feature a fair bit of introspection, in the end, Katherine’s character arc circles right back to where it began. And the problem doesn’t end there. Most of the supporting character arcs end up being poorly fleshed out. Do Bev and her husband eventually spice up their sex life? Does Jane manage to overcome Millie’s disobedience? We never learn.

Luckily for ‘The Duchess’, Katy Byrne as Olive is the show’s biggest revelation, playing the role of molly-coddled adolescent learning to stand on her own two feet to perfection. The show is interspersed with rare moments of heart, often between Olive and Katherine and Olive and Shep. Rory Keenan is believable and entertaining in the role of washed-up boy-band member Shep. Ryan’s acting, too, is refreshingly good and her fashion sense, even better, but neither are nearly enough to offset the show’s many faults.

Ultimately, the show’s biggest Achilles’ heel is how forgettable it is. It suffers from a lack of imagination that ends up being irredeemable. Its overuse of the anti-hero trope to the point of spill-over, a distinct lack of character development, and little to no concrete vision make it just one among many dramedy releases that failed to strike a chord.

Read More: Where Is Netflix’s The Duchess Filmed?