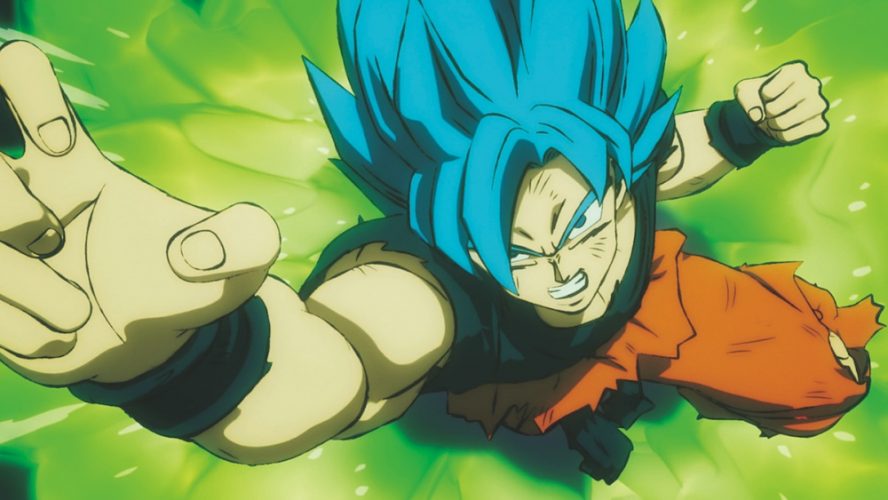 If you have been searching for the latest anime with English dubs then you have come to the right place. Today, we take a look at the list of best anime out there whose English dubbed versions are already available for streaming. Keep in mind that all of these anime originally released in previous years — some of them are even running right now. Without further ado, let’s dive into the list of new English dubbed anime that you can watch on Crunchyroll, Netflix, Hulu or Amazon Prime. 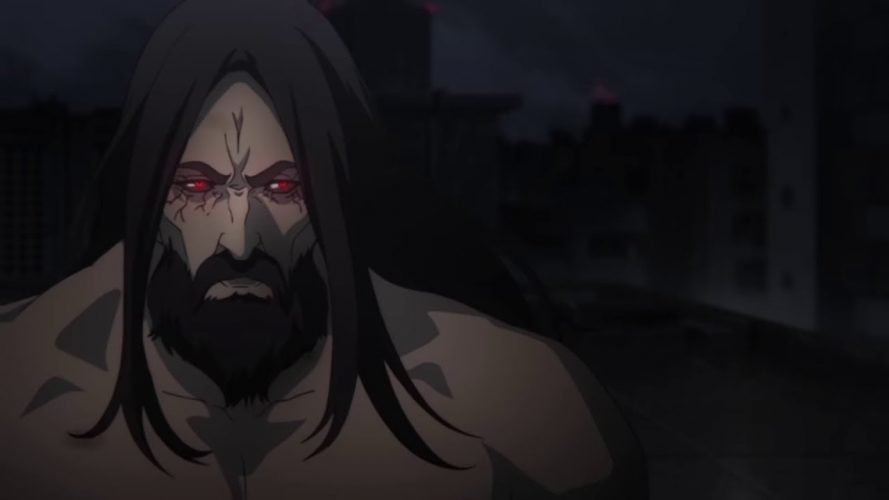 Look, I know ‘Tokyo Ghoul: re’ is not as good as its predecessors so there’s little hope for the second season to be good and to be honest, yeah, ‘Tokyo Ghoul: re 2nd Season’ isn’t that great. But still, there are lots of loyal fans of the franchise. If you are one of them and have been wondering if the English version was out yet then no need to wonder anymore. For viewers who have not yet watched ‘Tokyo Ghoul: re’, it takes place two years after CCG’s raid on Anteiku. Though CCG has got the upper hand now the problem of ghouls persist.

The ghouls have acknowledged the threat that CCG possesses and have become cautious. To completely get rid of the monsters CCG now has a new division which consists of human-ghoul hybrids, people who have undergone operations to have ghoul-like abilities. In the first season, we saw Haise Sasaki getting troubled by memories. The second season picks up from the end of the first season. 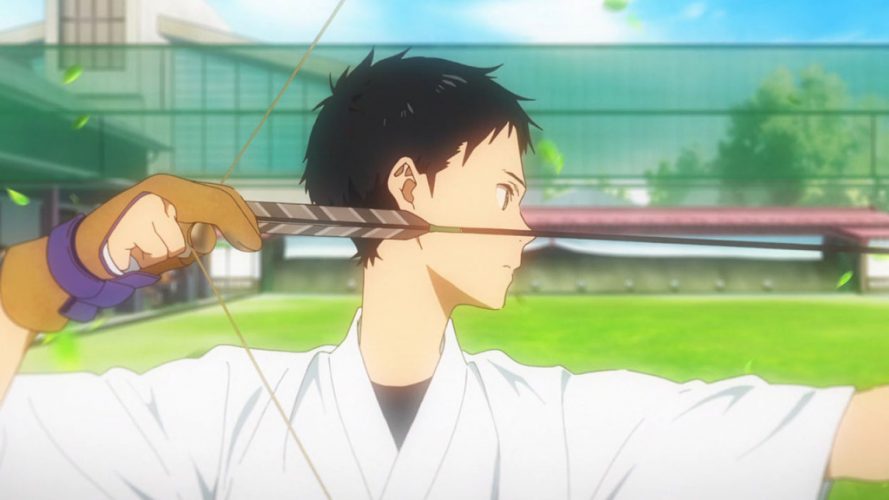 Sports drama is a popular theme in anime. Over the years, we have seen some great sports anime like ‘Free!’, ‘Ping Pong: The Animation’, etc. ‘Tsurune: Kazemai Koukou Kyuudoubu’ is a sports drama which revolves around the archery art, Kyūdō. The anime follows Minato Narumiya who used to love archery and was a practitioner of Kyūdō in his middle school. But after a certain incident, he quits altogether taking a vow never to return to the sport again. But when he enters high school his childhood friends start coaxing him into the sports again. Minato keeps on refusing but after he watches a mysterious man in an archery range in a forest he decides to get back into it.

Together he and his friends join their high school Kyūdō club and practice hard for winning the prefectural tournament. Kyūdō is a great sport. You will learn a lot about it in this anime. 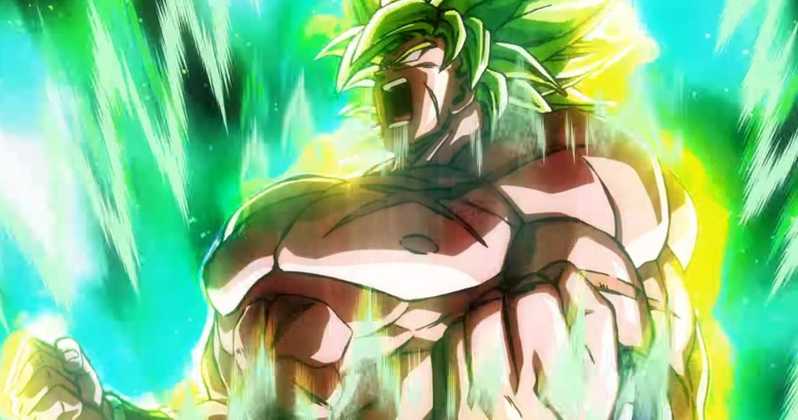 Yup, the Saiyans are back baby! Well, they were never really gone, to be honest. Every other year we see them transforming into a new form and kicking some alien ass. Broly the Legendary Super Saiyan is going to be the centre of attention in this movie. Though years ago we did have a Broly movie and we saw how powerful he was. But this time things are different since our heroes have the God form. They are surely going to kick him down easily but think again. It is Broly we are talking about.

The movie starts with a bit of history about the Saiyan race and the events that took place before the Saiyan home planet was destroyed. Most ‘Dragon Ball’ fans will be familiar with this history but anyways it is a trip down memory lane. Don’t worry if you have not seen the previous Broly films since it is not a sequel or anything. Goku and Vegeta will be facing Broly all fresh in this movie. 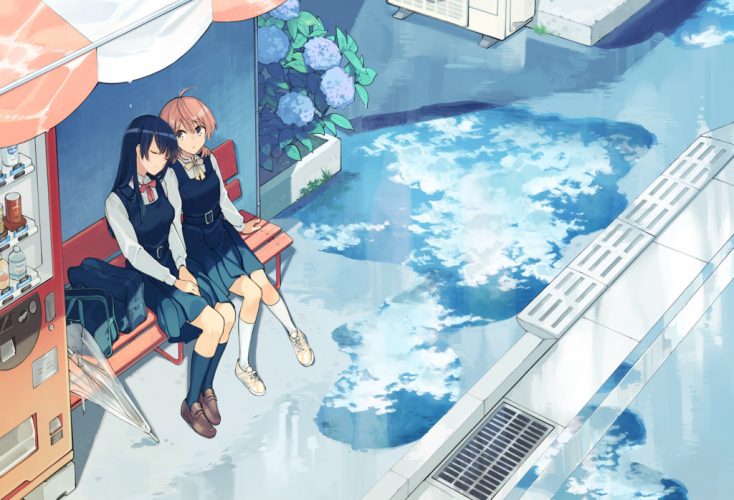 Now, it’s time for some romance anime. Although there were quite a few anime releases in the romance genre ‘Yagate Kimi ni Naru’ was by far one of the best. If you like romantic anime and have been looking for something which has an English version then go for ‘Yagate Kimi ni Naru’ without a doubt. It is a beautiful love story and the decent art and animation heighten the feel of this anime. Yuu Koito loves shoujo manga. She wants to experience love and hopes someone to confess their feelings for her. But when one of her classmates confesses his feelings for her Yuu does not feel anything. This incident confuses her and with it, she enters high school. There she encounters Touko Nanami, the beautiful student council president. Yuu sees the latter turn down a boy with maturity which impresses her.

Yuu wants to learn from her how to turn someone down politely but when the next one to confess to Yuu is Nanami herself what will she do? Has the love story she always wanted finally begun? 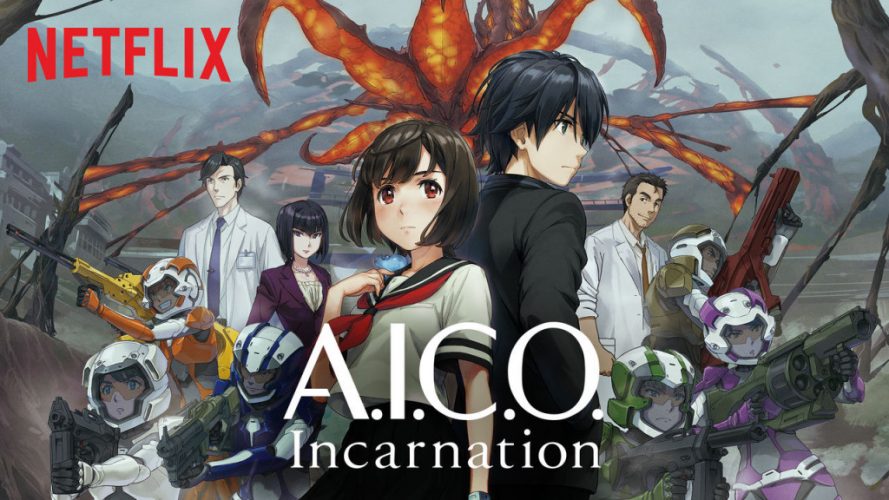 ‘A.I.C.O.: Incarnation’ is a sci-fi anime. The plot revolves around a girl by the name of Aiko Tachibana who is 15 years old. In the year 2035, her parents disappear following an incident that people dub, Burst. Scientists were trying to create artificially intelligent cellular organism but things did not go as planned and Matter, an AI, eroded Kurobe Gorge. Now there’s a prohibition in place to enter the research city. Aiko discovers that she might not be the real Aiko. Rather the real Aiko is trapped within Matter and she might just be a duplicate. To solve this mystery another student offers to help her and takes her to the main point which is where it all started. The show has a total of 12 episodes with each episode being 24 minutes in length.

Anime having music as a theme is really popular and for good reasons. The anime ‘Revue Starlight’ focuses on music and follows two girls as they strive to achieve their dream. The show will be a nice little break from your regular stuff and it isn’t that long either. There are a total of 12 episodes in the series and each episode is around 24 minutes in length. Karen Aijou and Hikari Kagura are close friends. They love performing and promise that they will become theatrical stars. Hikari moves to a different place but Karen remembers the promise and strives towards it. Years later the friends are reunited and they decide to fulfil their promise after getting an invitation to a mysterious audition. It seems that the girls’ dreams will finally be coming true but there’s a lot of competition from other girls with similar dreams. 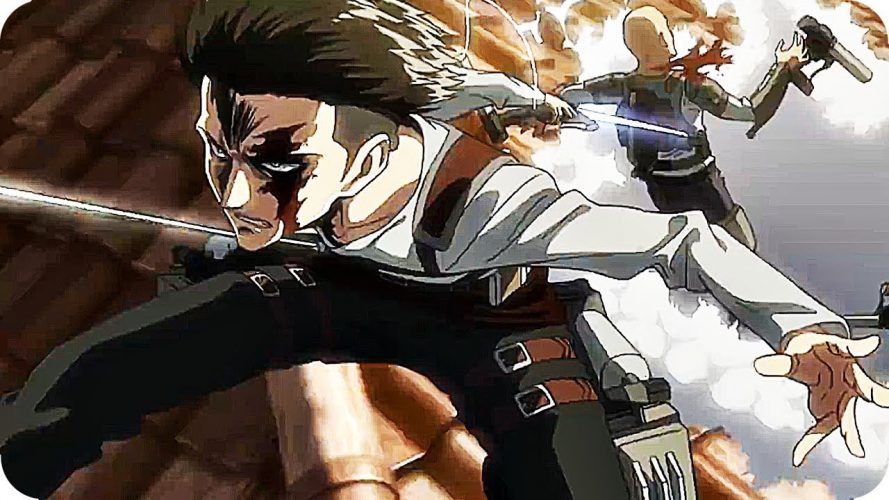 ‘Attack on Titan’ is one of the most popular anime right now. The series first aired in the year 2015 and has been going strong ever since, amassing a huge fan following. The anime is entertaining. The concept is not something new but the implementation is quite great. The art and animation of the anime are pretty decent too. The attention to detail when it comes to the fight scenes is decent. The story of this anime revolves around humans trying to fend off attacks from large humanoid monsters they call Titans who are slowly pushing humanity to the brink of extinction. As a last effort, humans create a special gear, the 3D manoeuvring gear, which allows them to fight the Titans. The first half of the third season released the previous year. For the second half, we might have to wait until April this year. 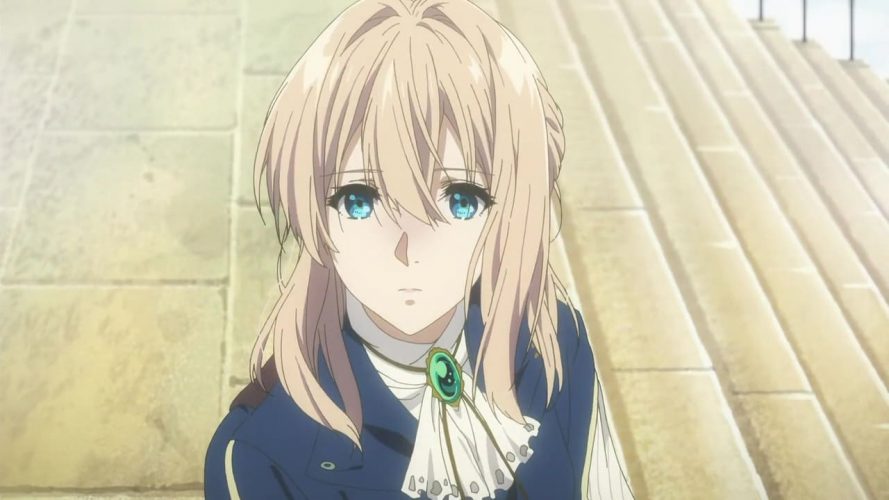 ‘Violet Evergarden’ is one of the best anime to come out in recent times. It is visually appealing, thanks to the decent art and animation job. The character designs are great too. It is entertaining and will hook you till the last episode. The story is nice and the characters are quite interesting. Violet Evergarden is a girl who was brought up as a tool for fighting in the Great War. She was trained to kill people and decimate enemy lines. But now the war is over and Violet does not know what to do. Living with a new guardian family did not work out for her and she starts working in postal service. There she sees an Auto Memory Doll working. The work of the doll includes transcribing people’s thought onto paper. Violet is somewhat moved by this and starts working as an Auto Memory Doll herself. This profession takes her on adventures which will finally lead to self-discovery. 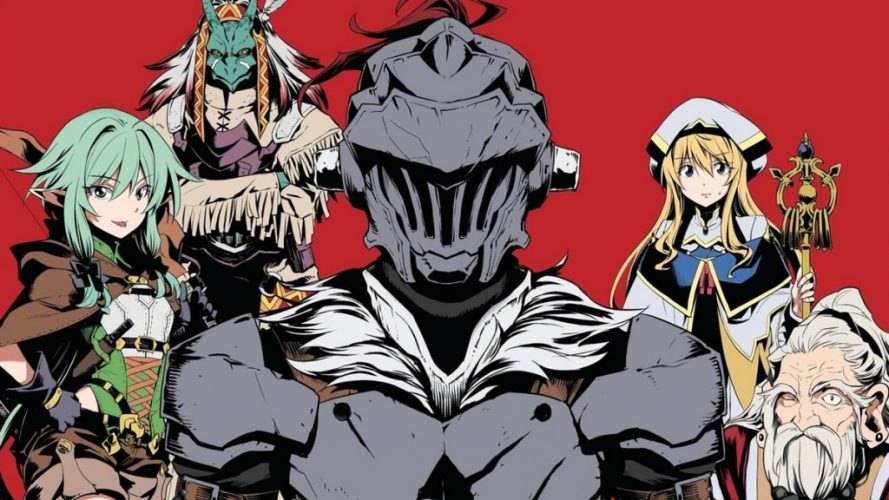 If you like you fantasy anime to be dark and having lots of violence and profanity then go for ‘Goblin Slayer’. From the first episode itself, you will realize what the show is going to be like. A young priestess wants to become an adventurer and assembles a group of people to go on her maiden adventure. But little does she know what lies beyond. As the party starts their adventure things go wrong as a bunch of Goblins attack them. This scene becomes violent as the Goblins hack them and rapes one of the members. But then a man by the name of Goblin Slayer comes to their rescue and decimates the monsters. He is a man who has vowed to kill zombies no matter what, without any remorse. 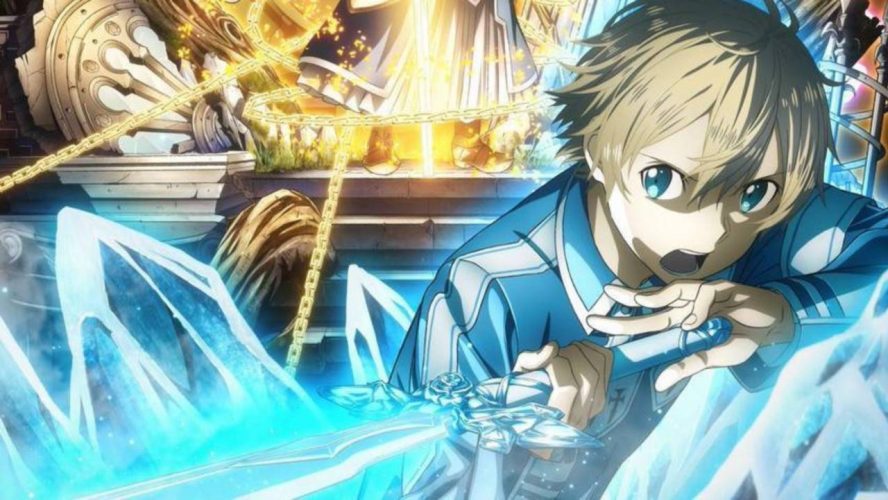 ‘Sword Art Online’ is a popular franchise in isekai genre involving games as a theme. If you are a fan of the franchise then you will enjoy this latest addition to the franchise, ‘Sword Art Online: Alicization’. The protagonist of this anime is Kirigaya Kazuto who finds himself in a virtual game-like fantasy world. But he has no memory of how he ended up here in the first place. Also, he does not seem to be able to log out. As he starts exploring the place searching for some clues he meets a boy by the name of Eugeo. Eugeo is an in-game character but he shows emotions like a normal human being. Moreover, our protagonist starts remembering childhood memories involving Eugeo which should not be the case since the latter is an NPC in a game. Also, he remembers a blonde girl by the name of Alice whose name he should not forget. 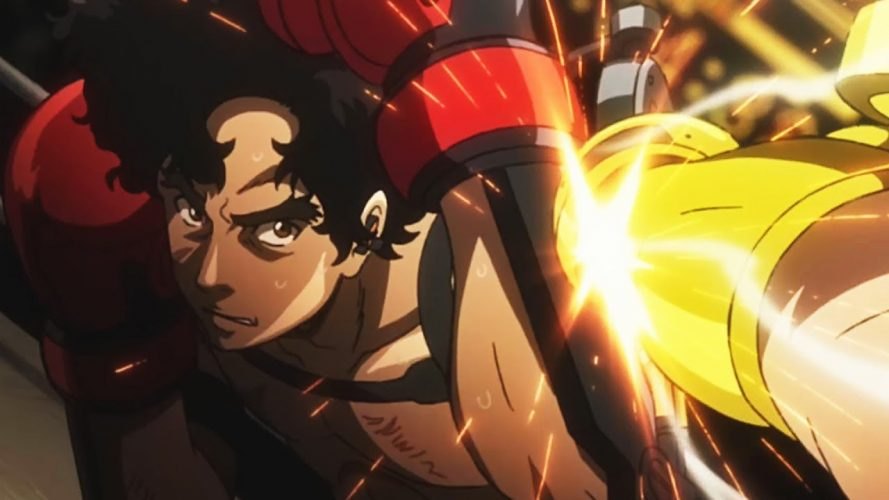 ‘Megalo Box’ is a great sports anime about boxing. The art and design of the anime will give you a nice feel. IT has a hip hop sort of vibe to it. The characters are quite nice especially the protagonist. If you were looking for a nice sports anime which has lots of action and is in English then go for ‘Megalo Box’. The story revolves around boxing which has evolved as a sport and has now become Megalo Box in which players wear extra gear to enhance their strength and agility. Follow the life of an underground boxer, Junk Dog, who enters the big leagues in the hopes of defeating the champion who defeated him in an underground match. Junk Dog is different from other boxers though. He does not wear any enhancing gear. 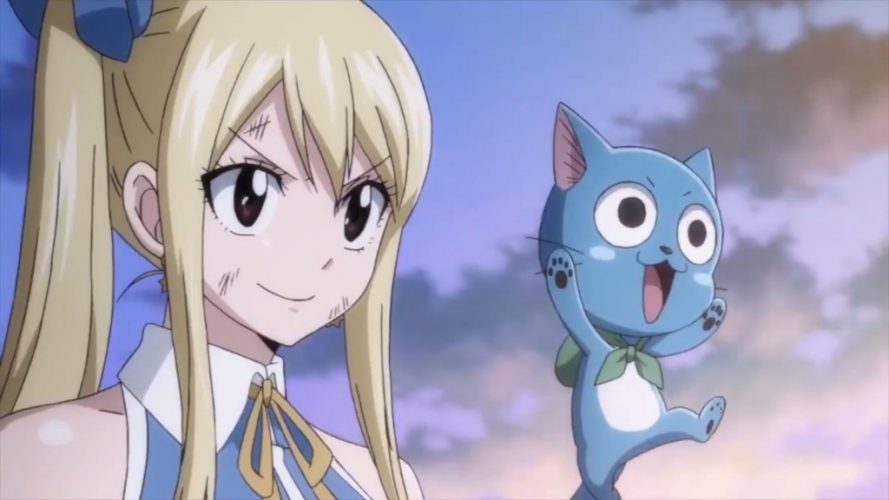 If you are a fan of the ‘Fairy Tail’ anime series then you will be happy to know that the episodes of the final season of the series which is currently going on are now available in English. So far the series finale looks good. For people who have not seen this anime yet then it is highly recommended that they do so since ‘Fairy Tail’ is one of the best fantasy anime out there filled with magic, action, and adventure. It revolves around the adventures of the Fairy Tail Guild which is a group of mages with great skills who take on various jobs.

Looking for an isekai anime in English. Then let me suggest you one of the hottest products in the market right now in that genre, ‘Tensei shitara Slime Datta Ken’. The story is quite fresh even though the premise is nothing different from various other such anime. Satoru Mikami is an ordinary man in his late thirties. He gets involved in an unfortunate incident where a passing robber ends up killing him. But instead of going to heaven or hell he ends up in a fantasy world reincarnated as a slime monster with great powers. Follow him on his adventures in this new world.