No One Gets Out Alive Ending, Explained 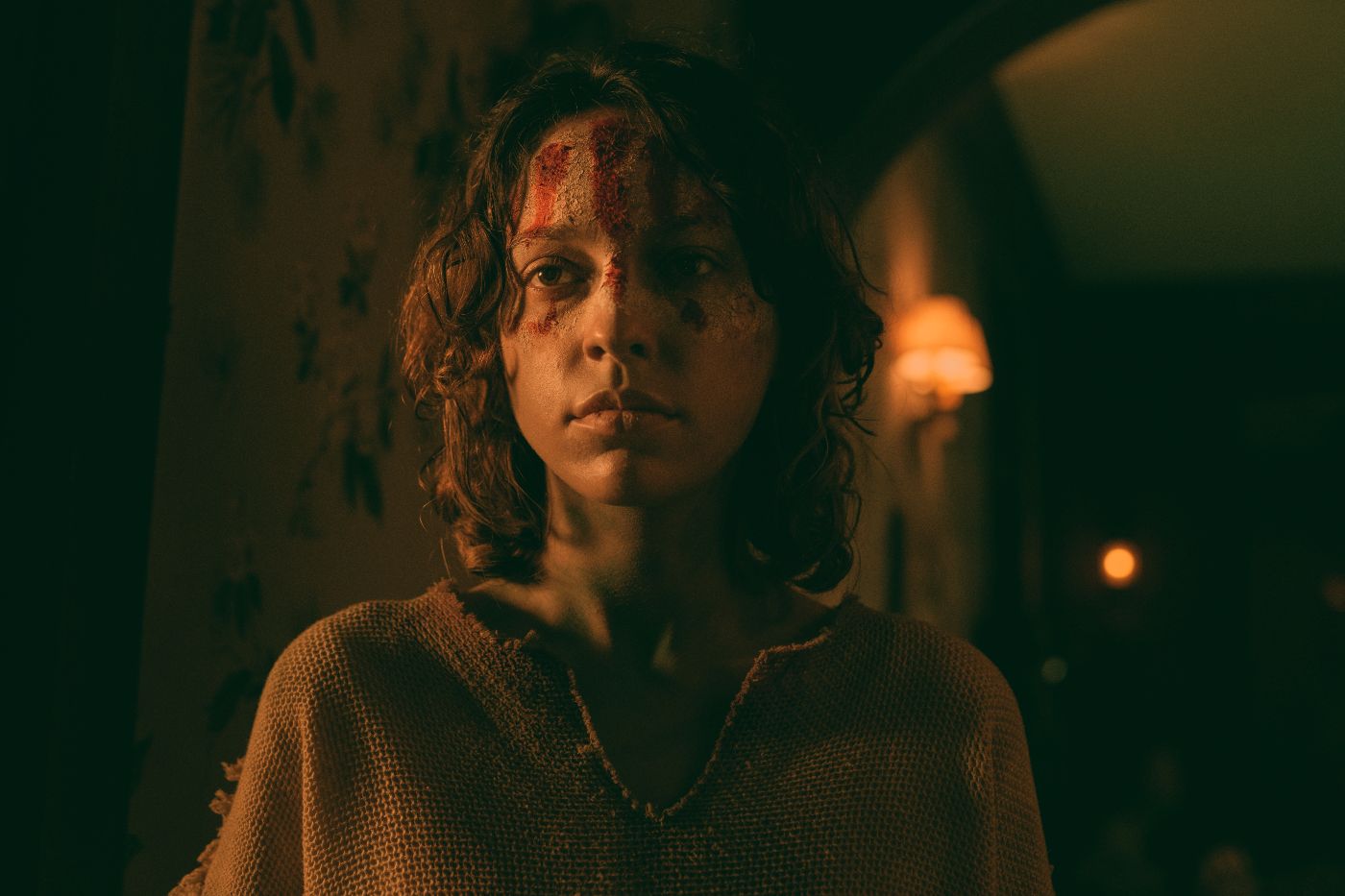 Like Adam Nevill’s 2014 namesake horror novel it is based on, ‘No One Gets Out Alive’ is an unflinching exploration of poverty set against the backdrop of distinctively supernatural and horror themes. Director Santiago Menghini takes it up a notch and introduces immigration and immigrant exploitation to the narrative. The film revolves around Ambar (Cristina Rodlo), a young Mexican woman who comes to Cleveland searching for happiness.

Circumstances force her to live at an old and dilapidated boarding house. It isn’t long before Ambar starts hearing the screams of women and chanting in an unknown language. She also begins to have vivid and disturbing visions, including those of her recently deceased mother. Here is everything you need to know about the ending of ‘No One Gets Out Alive.’ SPOILERS AHEAD.

No One Gets Out Alive Plot Synopsis

In the film’s prologue, a young woman named Simona is a resident of the Schofield Heights women’s boarding house. She admits to one of her relatives over the phone that she is having nightmares and wants to go home. Suddenly, she sees a box with intricate carvings that starts to rattle. A figure with glowing eyes then grabs her from behind.

In ‘No One Gets Out Alive,’ Ambar arrives in Cleveland in a shipping container. She finds a job in a clothing factory that hires undocumented workers like her. The manager of the hotel she is staying in tells her that she can’t live at his establishment any longer if she doesn’t provide legal identification. At her work, she sees a poster advertising Schofield Heights and decides to give it a try. She subsequently meets Red (Marc Menchaca), the house’s proprietor, who agrees to rent her the apartment even though he knows that she is undocumented. However, Red asks for a month’s rent as a deposit in exchange, and Ambar has no choice but to accept.

Ambar visits her mother’s cousin, Beto (David Barrera), to ask her if he can get her a better job. He tells her that she needs to be an American citizen to access those workplaces, prompting her to lie that she was born in Texas. Later, she tries to get falsified papers with the help of a colleague, but the said colleague escapes with the money that Ambar gave her. She gets fired when she shouts at her boss after learning that the colleague, Kinsi, has quit work.

The horrors of Schofield Heights are gradually revealed to her. Ambar begins hearing screams of women coming from the basement of the house. She comes across Freja, who is supposed to be the only other renter at Schofield Heights, and realizes that the other woman is traumatized. One day, Freja just vanishes. When she asks Red about it, he claims that she left the house.

Later, Ambar learns that Red has an older brother named Becker (David Figlioli), who suffers from mental health issues. Red has been taking care of his brother just as the latter protected him from their abusive father when they were younger. Ambar also meets Maria and Petra, Romanian immigrants who live at Schofield Heights and seem to have sexual relationships with Red and Becker.

Ambar also has visions and dreams so real that she can’t often discern them from reality. She keeps seeing the box from which a monstrous figure seems to emerge. She leaves the house and asks Red to give her back the deposit. He tricks her to go back to Schofield Heights, where the brothers lock her in her room. It is revealed that Becker has certain plans for her that involve an ancient Mesoamerican ritual.

No One Gets Out Alive Ending: What’s in the Box?

At the start of the film, silent footage shows the box’s retrieval from deep beneath the earth. While looking around in the study at Schofield Heights, Ambar discovers a photo of Decker and Red’s parents, Mary and Arthur Welles, with the box. She also finds a book called ‘Early Mesoamerican Rituals.’ Inside it, she finds an artist’s depiction of a sacrifice in front of the box. The already decapitated victims are shown lying on the steps leading to the box or on the altar. There is another depiction in the book itself that reveals who the entity inside the box is.

The entity is supposed to be Itzpapalotl, the Aztec skeletal warrior goddess who presides over the Tamoanchan, which, according to the mythological traditions and creation accounts of the Aztecs and other Late Postclassic peoples, is the paradise where the gods created humanity from the blood of the sacrificed and ground human bones taken from the Underworld of Mictlan.

The word Itzpapalotl can be translated to either “obsidian butterfly” or “clawed butterfly.” Her name likely derives from the obsidian or knife-tipped wings that she said to have. She is associated with a particular species of moth, Rothschildia Orizaba, from the family Saturniidae. This is why the moth/insect/butterfly imageries are prevalent in the film.

After bringing the box to their home, Arthur began sacrificing young, undocumented immigrant women to Itzpapalotl for her blessing. Mary initially helped him before Arthur sacrificed her as well. As mentioned above, Becker had mental health issues, and he and Red realized that they couldn’t afford his medical bills any longer. So, they came back to Schofield Heights. Their father was still alive then. But after learning what he had done, they killed him.

Soon enough, Becker became just like his father, and his mother’s role of a somewhat reluctant accomplice was taken up by Red. In return for the sacrifices to Itzpapalotl, Becker’s mental health issues started to recede. As Red tells Ambar, Becker believes that he would be fully cured after a few more sacrifices. Freja and Maria are killed as sacrifices to Itzpapalotl, along with all the other women that appear as ghosts with glowing eyes.

Did Ambar Kill Her Mother?

From what we see in Ambar’s vision from when she lies on Itzpapalotl’s altar in the basement of Schofield Heights, one of the conclusions that we can come up with is that Ambar killed her mother before coming to America. Her mother was severely ill, and Ambar took care of her, putting everything else in her life on hold. Whenever her mother got better, Ambar hoped that her life would go back to normalcy. And then, her mother became sick again.

This circle continued until Ambar apparently decided to break it and killed her mother by smothering her with a pillow on the hospital bed. This interpretation implies that what she sees on the altar is not entirely a dream but a vision mixed with memories. The voicemail from her mother that she keeps replaying throughout the film is the last normal communication between them. After that, Ambar went to the hospital and killed her mother.

A second interpretation of the dream can be that it’s entirely symbolic. Ambar feels guilty of not being there for her mother as much as the other woman needed and blames herself for her death. And the guilt and shame have manifested in her mind as a dream in which she literally kills her mother. The voicemail can be viewed as part of that package of pain — the last evidence of her mother’s love for her.

Why Does the Monster Spare Ambar? Does Ambar Leave the House? What Happens to Her?

As Ambar has the dream about her mother, Itzpapalotl approaches the altar, wraps her fingers around Ambar’s neck, and sees the vision that the mortal girl is having. To the Aztec goddess, the death of Ambar’s mother within the dream or the fact that Ambar has committed such an act likely becomes an offering, and she spares the girl. Ambar subsequently gets out of the basement, grabs a macuahuitl from the study, and attacks Becker and Red, who have been busy with the next sacrifice: Petra.

Ambar manages to kill Becker but not before the latter kills Petra and breaks Ambar’s ankle. To exact revenge on Red, she offers him as a sacrifice to Itzpapalotl. Before she leaves the house, Ambar sees him in a room with the same glowing eyes as the other victims. Her ankle and other injuries are then suddenly healed, making her realize that this is part of Itzpapalotl’s blessing.

No, Ambar doesn’t leave the house. She is an undocumented immigrant in a predominantly unknown city. Beto, her uncle and the only person who had been kind to her in the city, was killed by Becker. Ambar has nothing to her name and nowhere else to go. So, she decides to stay in Schofield Heights and become the new priestess of Itzpapalotl. This means that she will now find victims to sacrifice to the goddess and gain her heart’s desire through her offerings.