Can humans and monsters live together peacefully? With the Harlow genocide that is revealed to us in the previous episode, the answers become tougher than ever. Netflix’s ‘October Faction‘ successfully puts us in a deep ethical dilemma as it shows us the other side of the truth. Only, now, we don’t know which side to pick. If at all there can even be sides to pick from. To put our minds in ease (not), the ninth episode of ‘October Faction’ comes raging with all answers, revealing all the secrets the town had kept hidden.

Viv and Geoff realize that Alice is their biological mother. They were stolen from her as babies, and are in fact, warlocks. The two decide to side with her instead of Fred and Deloris, but they don’t want to hurt them. Viv says she wishes they could feel all the pain they have caused to the other creatures. Through Alice’s blood magic, she mentally tortures them to feel the pain of their own monstrosities.

The truth behind Dante, the mysterious monster is also revealed. Turns out, he is the reason Samuel has been captured by Presidio. Last October, Samuel tried to bring Seth back to life, using Harlow’s witchcraft. Dante, guilty of his own past sins, sacrificed his body for this. It also explains the summoning circle we found in Seth’s room initially.

We learn that Presidio is  working on something that could eradicate all subhumans forever, both Edith and Hannah will stop at nothing to achieve this. Meanwhile, Geoff and Viv go to the Gate Night with Alice. There they meet all their classmates, and both Geoff and Viv try to make amends with Philip and Cathy respectively. But this backfires. In frustration, Geoff reveals the lies of the students publicly.

Things eventually fall into place, with Geoff and Philip reuniting, while Viv realizes how good a friend Cathy is. But the episode ends with Alice returning, followed by an aerial shot that reveals a humongous summoning circle around the Gate Night. 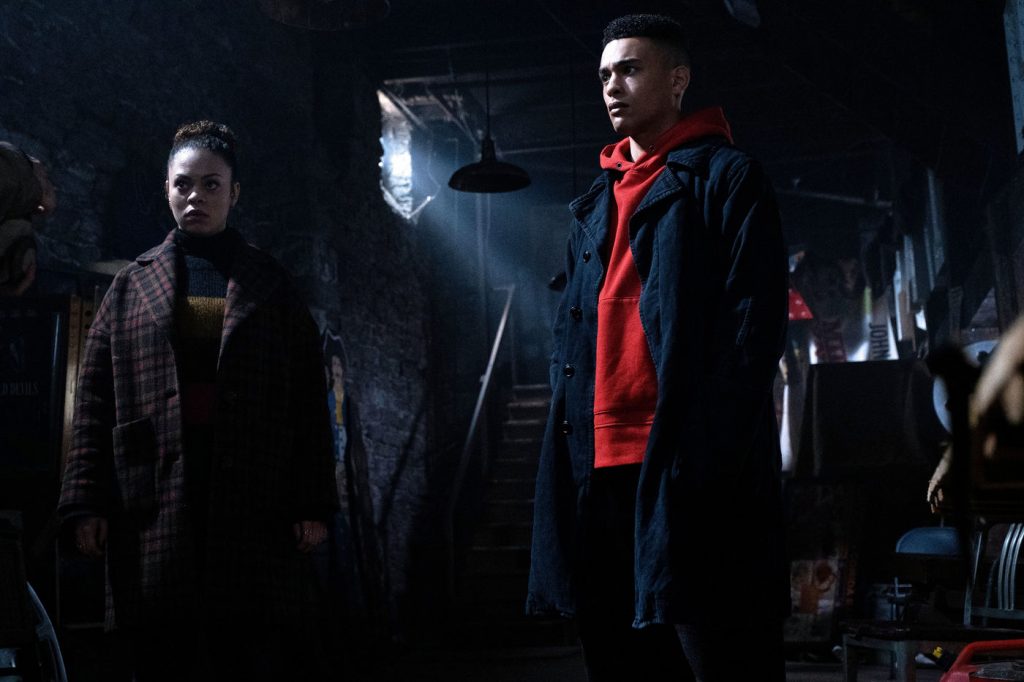 Ah, the episode that finally answers all our questions! I must say, the series definitely redeems itself as it progresses, taking a direction I certainly hadn’t predicted. But in retrospect, we see it coming right from the beginning, with the monster at the superstore, and then Alice picking out flowers from a field. It gradually and actively humanizes the monsters, while also making us realize that the humans were the real monsters all along. But of course, truth goes deeper than that. This is precisely where the last few episodes of ‘October Faction’ raise the bar when it comes to supernatural dramas.

‘October Faction’ does capture certain things really well especially in the way it portrays both monsters and humans. With each character, be it human, vampire or warlock, that we empathize with, the series successfully puts us in a deeper ethical dilemma. It reveals that there is no good and no bad, or rather, good and bad exist within one. Each character does what he/she does for a cause, out of power, revenge, and protection.

In many ways, ‘October Faction’ turns into any other war story, there are no heroes and no villains, everyone loses. Of course, it does this with its own share of family secrets, high-school drama, summoning rituals,and secret chambers to capture monsters, you know, the usual. But situations and illusions do make villains out of us. Maybe, Alice and Edith are after all the villains of this story, just like Seth, Samuel, Fred and Deloris were in others.

Another realization that hit me as I watched this episode was that Fred and Deloris are so much more interesting to watch than Viv and Geoff. Both their past and present selves. However, the younger Allens definitely have a lot more screen time. But its harder to dive into their narratives, as it feels hollow, and almost shallow. In fact, Geoff’s impulsiveness in the episode definitely manages to tick one off. But then, these are 17 year olds, what better can one expect of them. In contrast, the older characters, including the supporting cast, be it the Allens, Alice, Gina or Nadir, with their complex storylines and tragedies, definitely leave a bigger impact. With us slowly reaching the season finale, we can certainly expect a big showdown to take place soon. But we still don’t know whose side we’re on.