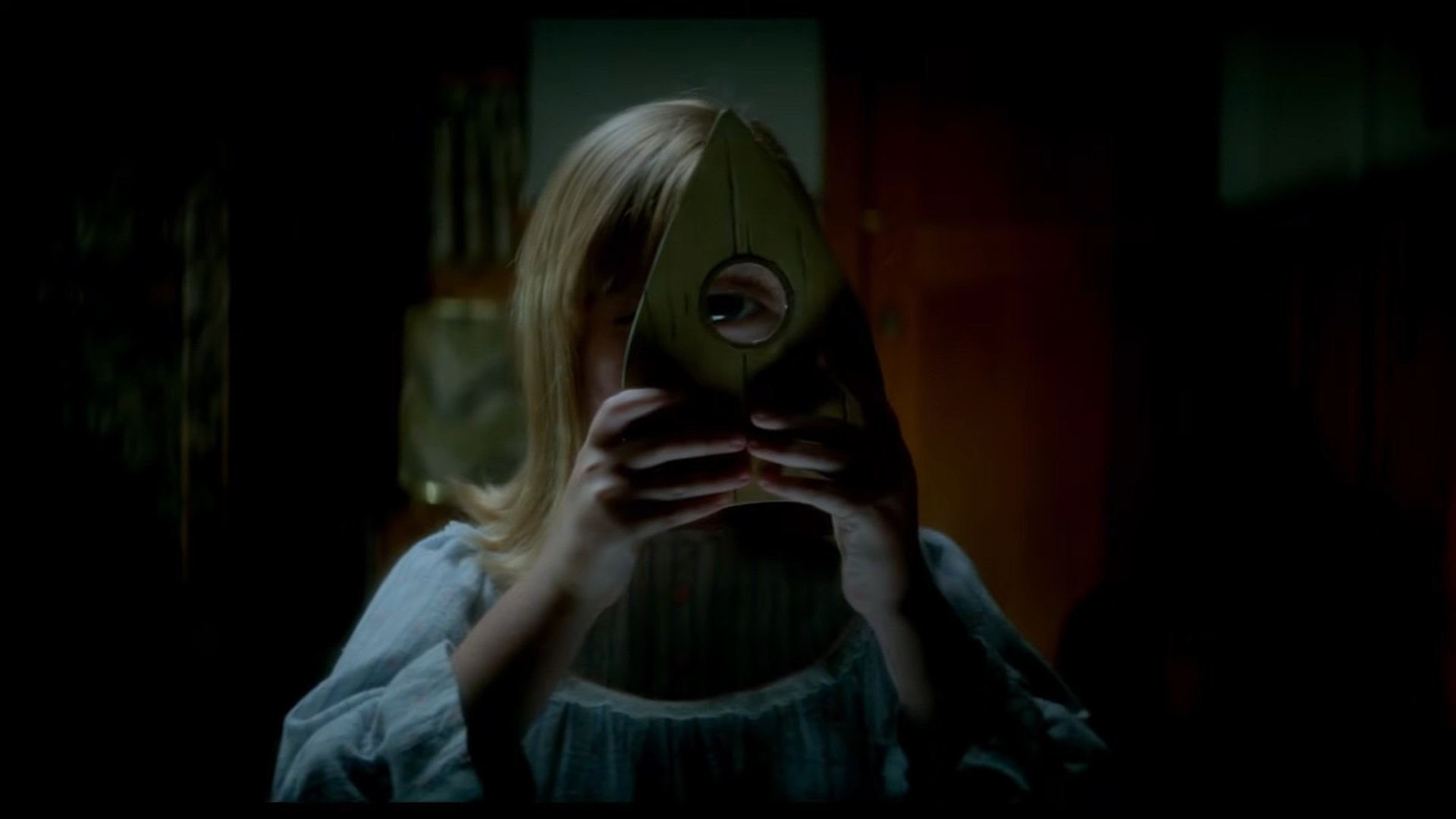 Directed by Mike Flanagan of ‘Oculus’ and ‘Gerald’s Game‘ fame, the 2016 horror-thriller venture ‘Ouija: Origin of Evil’ is a treat to your senses. The story, based on the game by Hasbro, takes us to the house of the single mother and spiritual communicator Alice Zander. Alice is a con artist who seeks to give people closure by theatrics and sleighs of hand.

After finding an Ouija board, Alice and her daughters start encountering real spirits. Gradually, the movie probes into a harrowing history of Alice’s family house. You may wonder what goes down in the fast-paced final moments. If the finale is bugging you, allow us to delve deeper. SPOILERS AHEAD.

The camera takes us to spiritual medium Alice Zander’s house in the first sequence. Mr. Browning and his daughter Jenny have come to Alice, hoping to establish a connection with Mary Browning, the deceased matriarch of the family. Mary indicates that she is rejuvenated in her afterlife and that she forgives her husband. However, she does not consent to mortgage the house to felicitate Jenny’s marriage with Don. Instead, we get an old-school jump scare, while the specter behind the curtains is later revealed to be Lina. 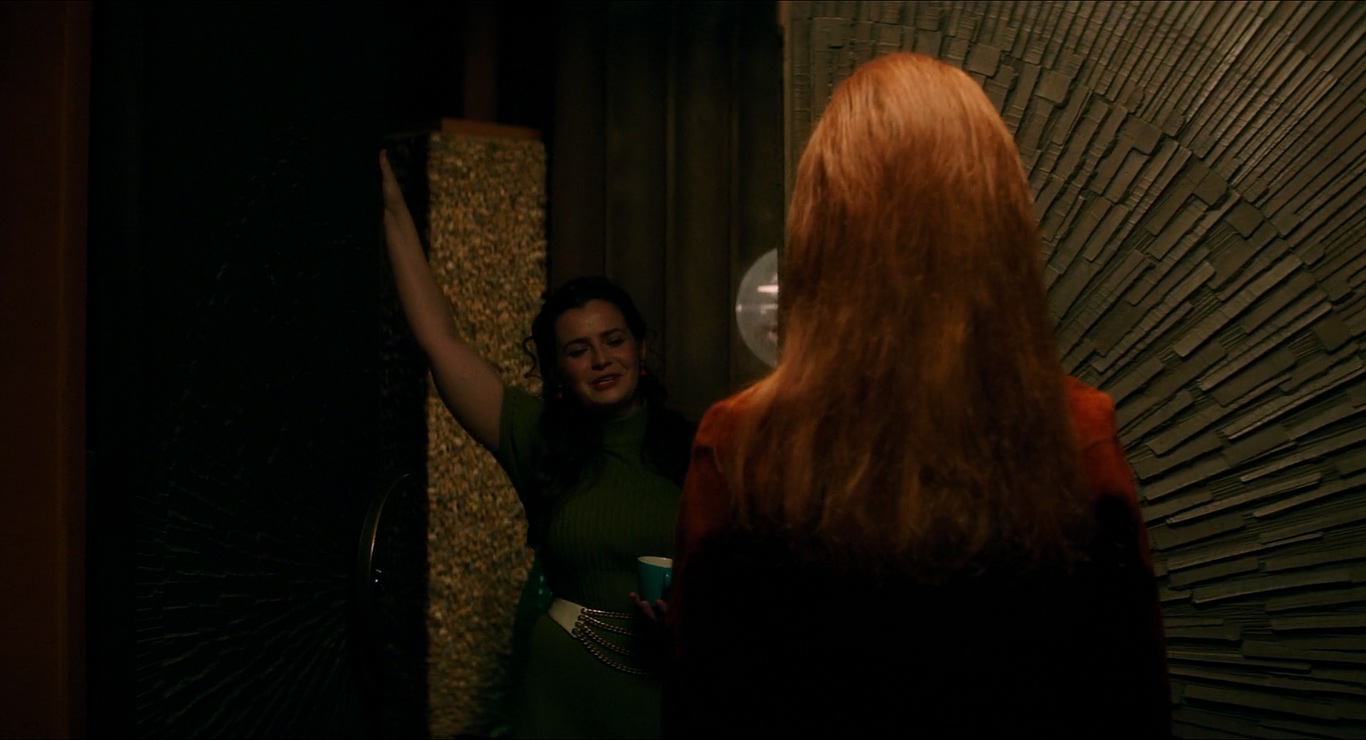 Lina sneaks out of her room late at night, visiting a wealthy friend who introduces her to the Ouija board. Lina thinks Alice should use the board to step up the game, and Alice visits a toy shop to procure an Ouija board. After getting the board, Alice performs a dummy session using magnetic belts on her thighs. Mysteriously, Doris responds to Alice’s questions, and we get the idea that she is possessed.

When Alice goes on a date with Father Tom to talk about the girls and the home, Lina calls over her high school crush Mikey. Mikey and Lina share a kiss, but on his way out, Mikey gets to know from Doris how it feels to be strangled to death. Alice receives a foreclosure notice, but Doris, convinced of speaking to Roger (the deceased father), brings out a wad of cash from the basement walls. However, Alice soon realizes that the spirit possessing Doris is not all that benevolent.

Ouija: Origin of Evil Ending: Who Is Marcus?

In the first scene where Doris is possessed, she introduces herself as Marcus. We realize that Marcus is among the spirits inhabiting the house, and the spirit uses Doris as a vessel. Afterward, Lina sees Doris writing a letter as if in a trance. Lina secretly takes the pages to Father Tom at the school. By reading Doris’s writing in Polish, Sister Hannah discerns the brutal truth about Marcus. 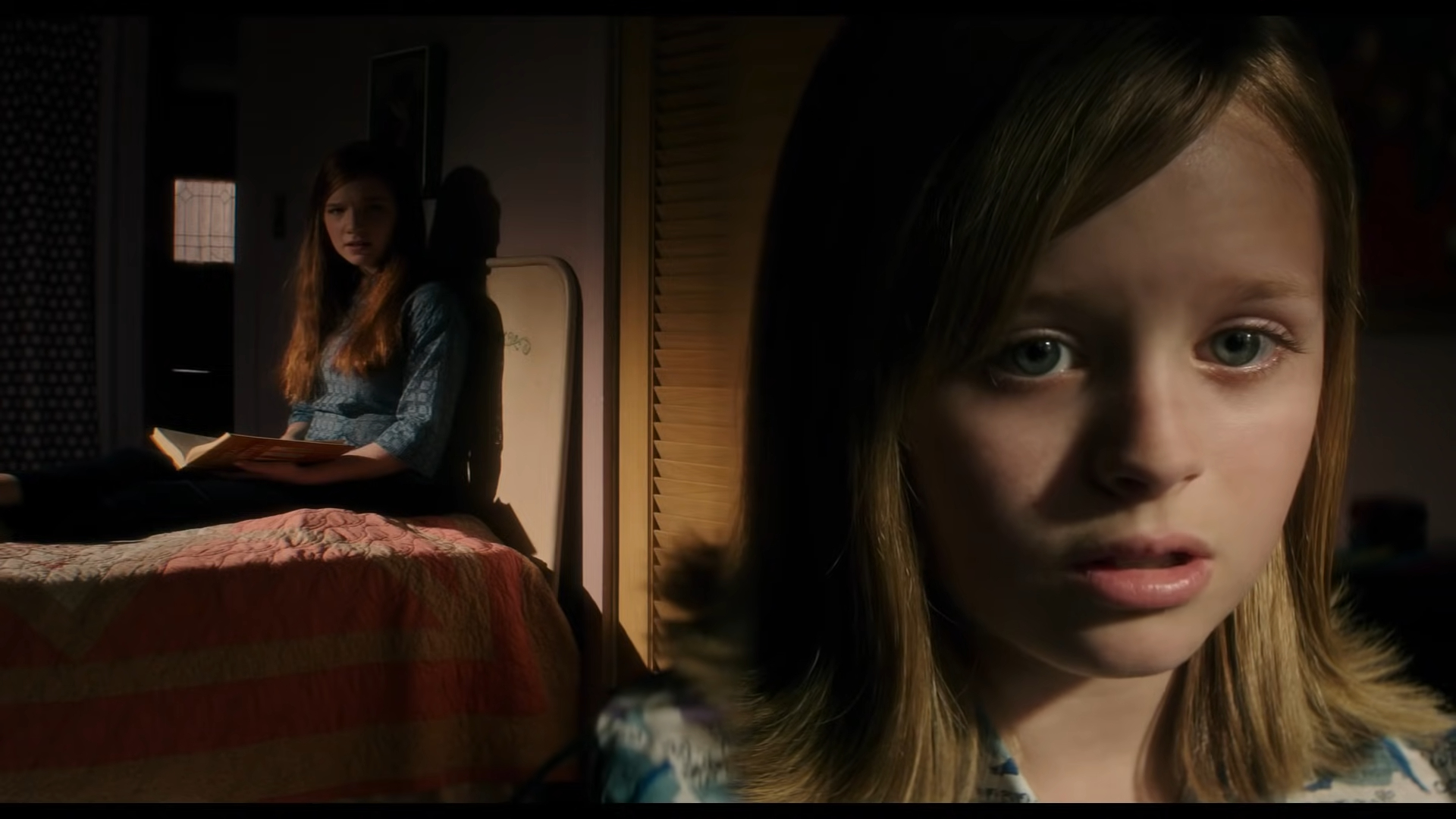 Marcus was a Polish soldier locked up in a German concentration camp. He got out of prison and came to the US. After living the homeless life for some time, Marcus wound up in a mental institution. Closely interlinked with Marcus’ history is that of the German doctor, who was familiar as the Devil’s Doctor for his association with the occult. After the war, the doctor came to the US, setting up a base in the same house as the one where the Zander family lives now. He recaptured Marcus and several others, continuing experiments on them from the comfort of the basement (where Doris had found the money earlier).

The doctor cut out the tongues of the victims, severed their vocal cords, and sealed their mouths. As a result, the victims could not even make a sound when people socialized and mingled upstairs. As Father Tom tells Alice and Lina, the letter graphically describes the death of Marcus and goes on to reflect upon the damning afterlife of the inhabitants of the basement.

Are Doris and Alice Dead or Alive?

The final scenes unfold some disturbing visuals, and if you have closed your eyes by the time, you may have missed a scene or two. After discovering Doris’ talent as a vessel, Alice uses her in the seances. Father Tom comes for a visit, hoping to speak to his wife, Gloria. Doris delivers a compelling planchette session, even speaking in a female voice on one occasion. However, Father Tom realizes that while Doris can read his mind, she cannot communicate with spirits outside the house. While Gloria’s middle name was Catherine, Father Tom deliberately thinks of his mother’s middle name, Lynn. Influenced by the thought of Father Tom, Doris misreads the bit. 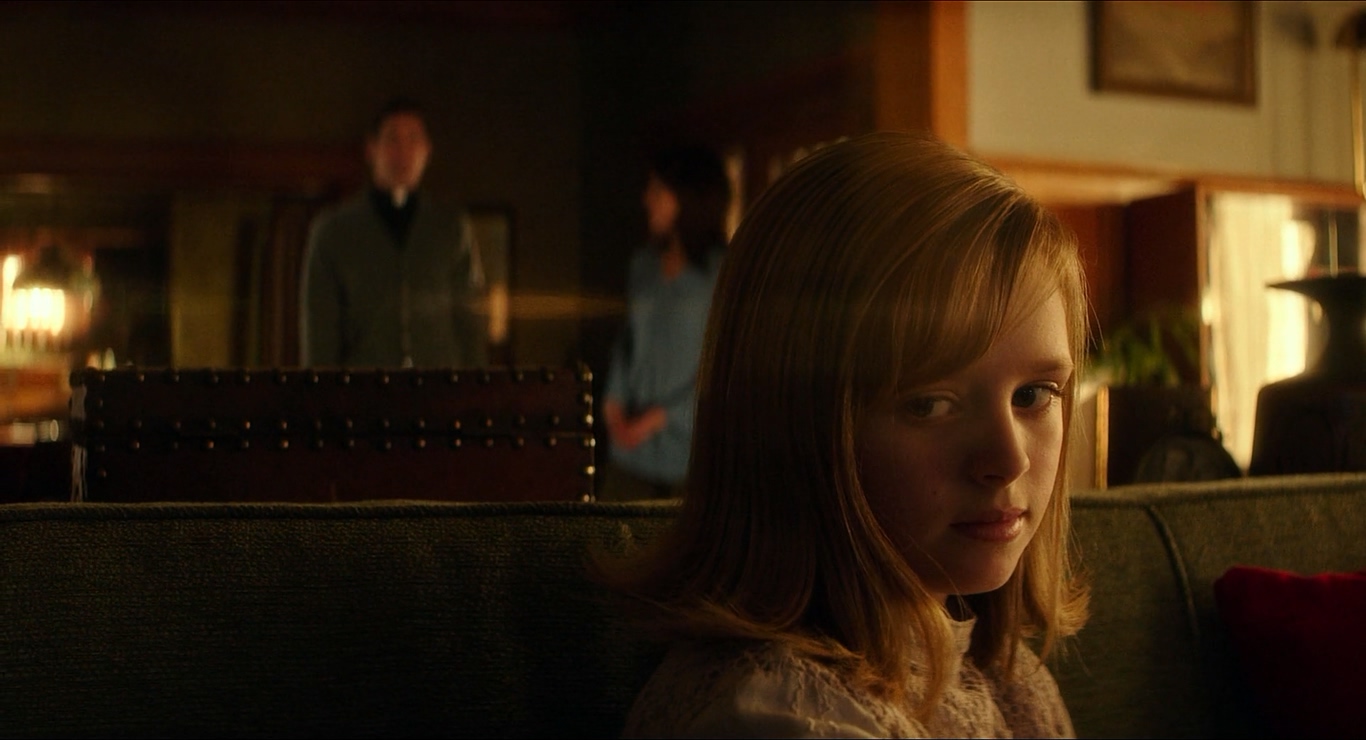 Afterward, when Father Tom is busy speaking with Alice and Lina, Doris welcomes Mikey into the house. She takes Mike to the basement and goes on to strangulate and kill him. When the party comes downstairs, they discover Mike hanging from the ceiling. Doris and Father Tom encounter in the basement, and Father Tom comes back possessed with the news that Doris has become part of the walls. Doris seemingly dies in the cellar, while Father Tom goes on to kill Alice with a knife. However, he comes back to his senses shortly before committing the murder, but that does not save him. Doris’ ghost gets to him, and he falls from the stairs, dying instantly.

Meanwhile, Doris uses Lina as a vessel and Alice volunteers. In the following moments, Lina stays in the in-between realm, catching a glimpse of her dead father, who sealed off the doll’s mouth to stop the voices. On the other hand, the possessed Doris goes on to bind Alice with shackles. She contends that she wants their voices. In the meantime, Lina comes back to the mortal realm, sealing off Doris’ mouth. History repeats itself as Lina experiences some protest from the other spirits inhabiting the house. Although she is successful in her endeavor, the spirits seemingly possess Lina as well. A white-eyed Lina then proceeds to stab Alice with a knife, effectively killing her.

Where Does Lina End Up? Is She Still Possessed?

In the aftermath of the sinister night, Lina seemingly ends up at a mental institution. The doctor contends that Lina has stayed there for two months. Lina lives in a state of delirium, and the doctor subtly reminds her of how she killed her mother. Doris’ body is missing. Lina cryptically replies how Alice wanted to know that the family was not alone after Roger’s death, concluding how Alice has the answer in her afterlife. In reality, the Zander family was always surrounded by the spirits in the basement. Thus, Lina knows what she is talking about, but the doctor does not have a clue. 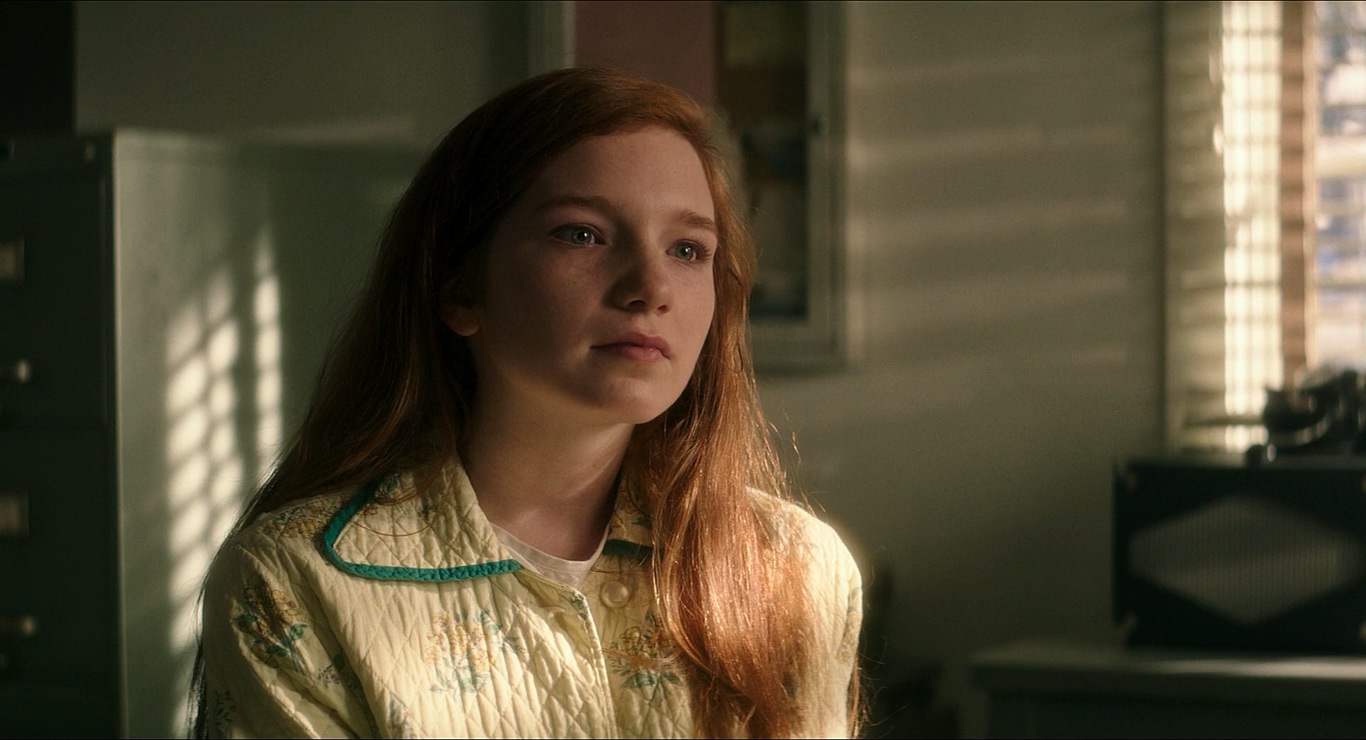 Lina then returns to her room and draws an ad-hoc Ouija board with blood. Lina, who still seems to be under some possession, communicates with Doris. On his nocturnal visit, the doctor sees Lina sitting with Doris in the room. As he comes back to ensure what he saw, we get another jump scare, which is probably the most dread-inducing in the entire movie. Doris’ ghost comes crawling through the ceiling upside down, and we sense that the doctor does not get a happy ending. On another note, we become sure that Doris is still present with Lina in spirit.

Is There a Post-Credits Sequence? Who Is the Visitor?

You may have thought that the movie ends with the credits (innovatively stylized as if seen through the Ouija lens). If so, you would be astonished to know that the final moments conceal a post-credits sequence for the avid genre fans. The post-credits sequence opens in 2014 when Lina is much older. We revisit her at the mental institution (or maybe not the same one) as Lina gets the news of someone claiming to be her niece visiting her.

While the movie ends here without closure, the post-credits scene directly ties the film with the 2014 film ‘Ouija,’ to which this movie is a prequel. If you have seen the first movie, you would know that the visitor is Laine Morris. Moreover, she is not really Lina’s niece but a member of the family that buys the house after the departure of the Zander family.

Read More: Is Ouija Origin of Evil Based on A True Story?