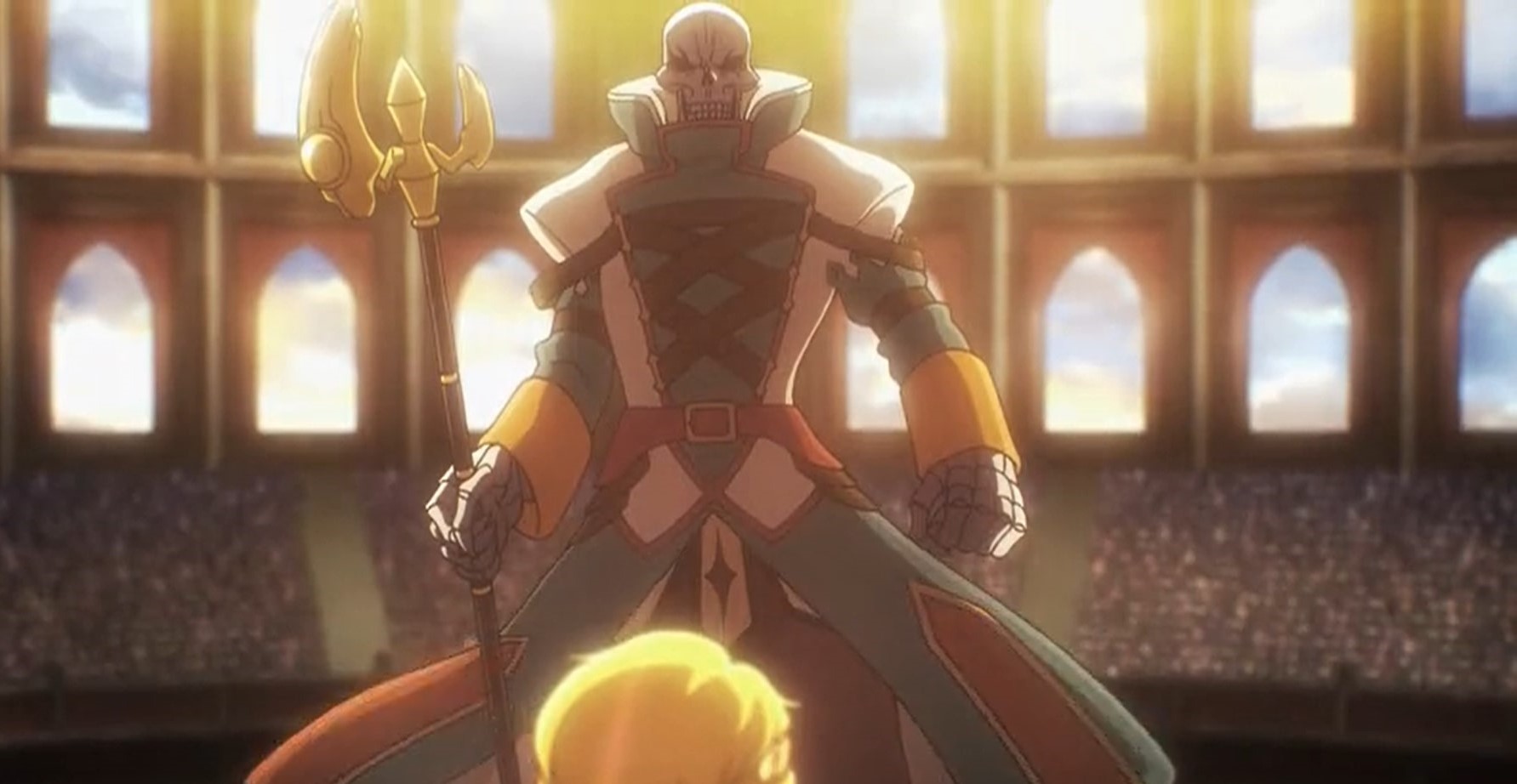 In the third episode of ‘Overlord IV’ or ‘Overlord‘ season 4, titled ‘Baharuth Empire,’ Cardinals have a meeting deep within the Slain Theocracy to discuss political problems which include the frightening rise of Momonga to power. They discuss the state of the Sorcerer Kingdom under his rule and try to come up with ideas to put an end to his rule. Meanwhile, emperor Jircniv Rune Farlord El-Nix of the Baharuth Empire is also concerned about Momonga’s ruthless attitude to politics and is deeply concerned about the future. Here’s everything you need to know about the ending of ‘Overlord‘ season 4 episode 3. SPOILERS AHEAD!

Before leaving for a diplomatic meeting with the prince of the Re-Estize Kingdom, Momonga has a brief discussion with Albedo. He gives his best wishes to her and is confident that her mission is going to be very successful as the small army of undead that accompanies her is sure to instill some fear in the heart of Re-Estize’s army. Momonga also asks Albedo to look after herself. Although she is not affected by diseases there is a possibility that she may come in contact with some foreign pathogens that will affect her health.

Albedo is thrilled that Momonga has started worrying about her well-being and decides to use it to her advantage. She argues that a kiss is good for immunity. Momonga knows what she is trying to say but just gives a peck on her cheeks not knowing that Albedo thought he would just ignore her wish. Once she has left, he feels embarrassed about the whole scenario and asks his maid as if it never actually happened.

Meanwhile, in the Slain Theocracy, Cardinals have assembled to discuss the unprecedented rise of Momonga to power and the fear of allowing an undead army to rule an entire kingdom. They know that going against Momonga is a huge risk as he is too powerful. In fact, the thousand leagues astrologer has even confirmed the presence of the death knights in the capital of the Sorcerer Kingdom. Although it is literally impossible for a human being to fight a death knight two God-kin can alone take on an entire army.

Unfortunately, the thousand leagues astrologer has gone into seclusion because of the deep despair she has felt after observing the growing army of the undead. She has witnessed a power that apparently even God-Kun cannot defeat, which speaks volumes about the dark forces that are now coming for them. They believe that the Sunlit scripture was most likely destroyed by the Sorcerer King. The Cardinals are concerned that so many powerful monsters showing up in the same kingdom at the same time can’t really be a coincidence and there is a possibility that they are all working together.

Although there is a good chance that the worst fears of the Cardinals are true, one of them argues that it will not be such a good idea to turn the Sorcerer King against Momonga. But others disagree as directly involving themselves in politics can have dangerous consequences. Meanwhile, in the Baharuth empire, emperor Jircniv Rune Farlord El-Nix finds a resignation letter from all the elites of his kingdom. He realizes that in a time like this he cannot afford to lose their support. As dark clouds gather on the horizon, El-Nix realizes that he must come up with a plan or else face the horrific consequences of failing to protect himself and his kingdom.

When El-Nix realizes that the Slain Theocracy is also wary of the dangers posed by the Sorcerer Kingdom, he finally sees some hope of defending himself against Momonga’s dark forces that have instilled fear in the elites. He plans to ally with the Theocracy so that he has some chance against the mighty Sorcerer Kingdom. He begins the preparation to meet the merchants sent by them. 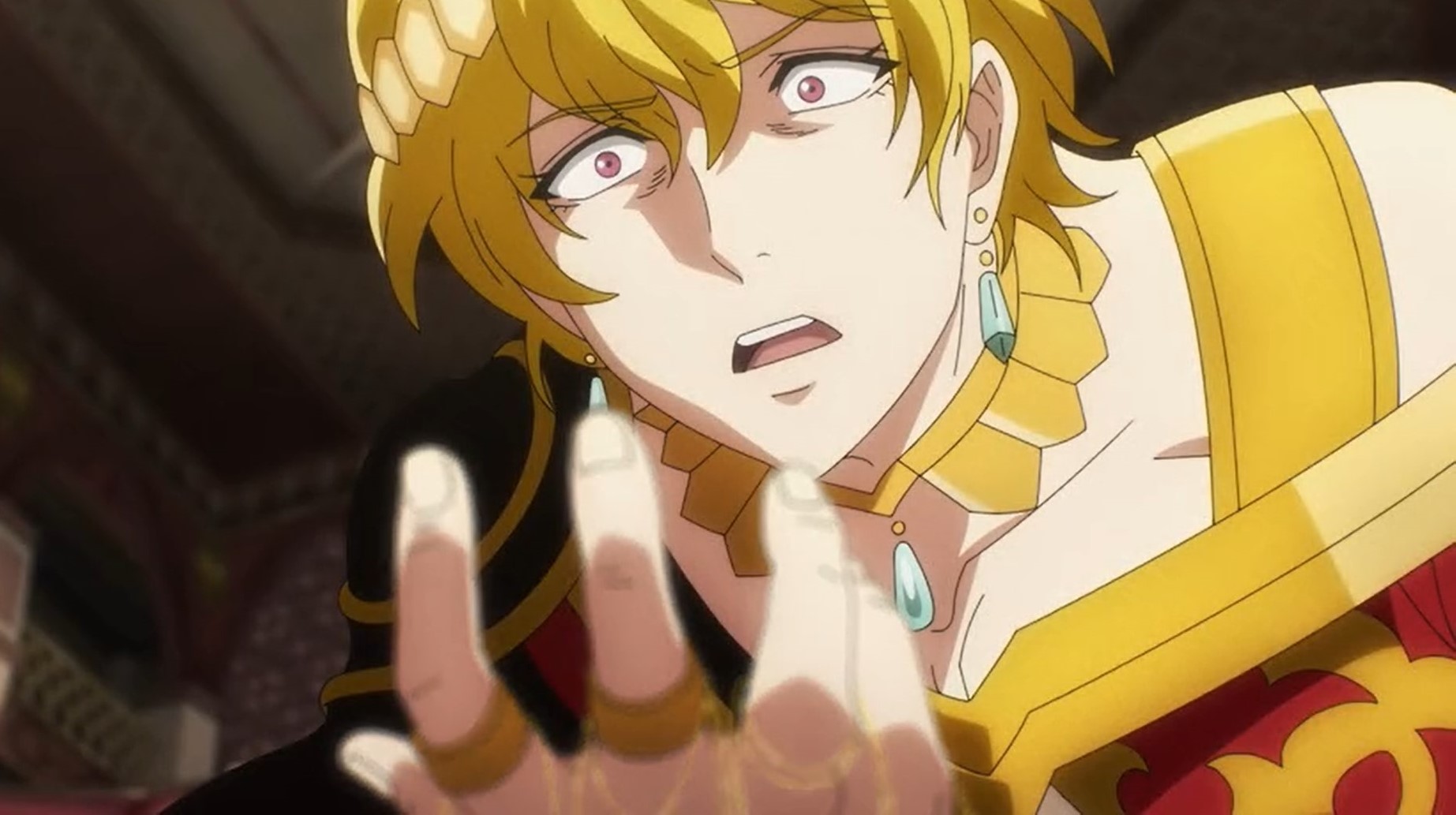 Therefore, El-Nix decides to use magic and other countermeasures to ensure that the discussions do not get leaked in any way. Furthermore, he also meets a team of adamantite adventurers who are ready to provide an added layer of security to him. They are some of the strongest warriors so El-Nix feels quite confident in his preparations. He has planned to meet the merchants at the Colosseum where the King of Warriors is about to face an unknown enemy.

After El-Nix receives an inquiry from the Theocracy, Momonga shows up at the Colosseum upsetting the merchants who leave immediately. Just when Theocracy and Baharuth Empire are finally beginning their talk, Momonga intervenes by showing up at the wrong time. It is a genius move as it would certainly sow the seed of distrust between the two Kingdoms, which will make future collaboration unlikely.